Mount Kailash or Mount Everest? Which One You Should Visit and What to Experience Respectively

High up on the Tibetan plateau, in the mighty Himalayas, lie two of the most unique mountains in the world. Visited by thousands of tourists every year, these two Himalayan giants are the most popular mountains in Tibet, but for very different reasons.

Mount Everest, as everyone knows, is the world’s highest mountain, sitting at 8,844.43 meters above sea level. The single most popular mountain in the world, it sees travelers from all over the globe making the journey to its famous North Base Camp to view and photograph the mountain. Conversely, Mount Kailash, which lies in the Gangdise Mountain Range in Ngari prefecture, is only 6,638 meters above sea level, but has the distinction of being the most sacred mountain in the world. Never having been climbed, it is a sacred mountain reputed to be the center of the universe in four different religions.

As each mountain has its own significance for tourists, so the tour experience of each is completely different. Where one is more about the bragging rights of actually having been there, the other has a more spiritual following, with the main reason for traveling being the spiritual experience of the mountain itself.

Mount Everest, the world’s highest mountain, has long been a draw for tourists, trekkers, and mountaineers, and the main reason people travel there is to say, “I did that, I went there.” In Tibet, unlike in Nepal, the Everest Base Camp (EBC) can be accessed by vehicle direct from Lhasa, following well-paved roads to the site. 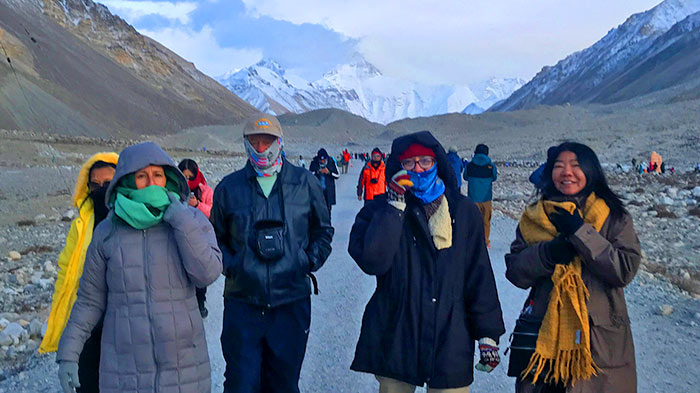 There is a trek to Mount Everest in Tibet, which starts from Old Tingri, the town where you turn off the G318 Friendship Highway to get to Everest by vehicle. The trek is 70 kilometers long and takes around four days to complete for a person that is relatively fit. The trek from Old Tingri to Everest Base Camp is not overly hard, although there are some parts of the route that can be arduous, with some high-altitude passes and a few rough patches along the way. It is rated for someone with a little experience in trekking, though you do not really need experience at high-altitude trekking for this route. - Check Ultimate Guide for Tingri to Everest Base Camp Trekking

The landscape around Mount Everest is one of desolation in most parts, with a few exceptions such as the Gama Valley to the east of the mountain. On the high-altitude plateau, most of the year the area around Mount Everest is dry and dusty, with the little grass and plants being dry and ragged, ideal for high-altitude conditions. The Gama Valley, a popular place for trekkers - Join Gama Valley Trekking Tour, is one of the most beautiful valleys in the world, and is lush and green, in stark contrast to the area directly around the mountain. - Check the Everest Trek: Trekking Routes along The Gama Valley

Touring to Mount Everest is a very tourist-oriented excursion, as the main reason to go there is to take photos and just to be able to say you went there. It is the chance of a lifetime to visit this huge mountain, and something that you can tell your grandchildren about in the years to come.

Mount Kailash is the most sacred mountain in the world, according to four separate religions. For Hindus, Buddhists, Jains, and Bonpo, the mountain is considered to be the center of the universe, also known in some texts as the legendary Mount Meru. A very different experience to visiting Mount Everest, a trip to Mount Kailash is more of a spiritual adventure, in the sense that it is a very spiritual place. Even those that are not religious often say that they felt a spiritual sense of attachment to the mountain.

Mount Kailash is the legendary scene of the ancient battle between Milarepa, the Buddhist sage, and the Bon mage, Naro Bon-Chung. It is said that the battle ended with a race to the top of the mountain, and while Naro Bon-Chung started off immediately, Milarepa sat meditating until his opponent was almost at the top, then flew to the summit on a ray of sunlight, beating the Bon mage. 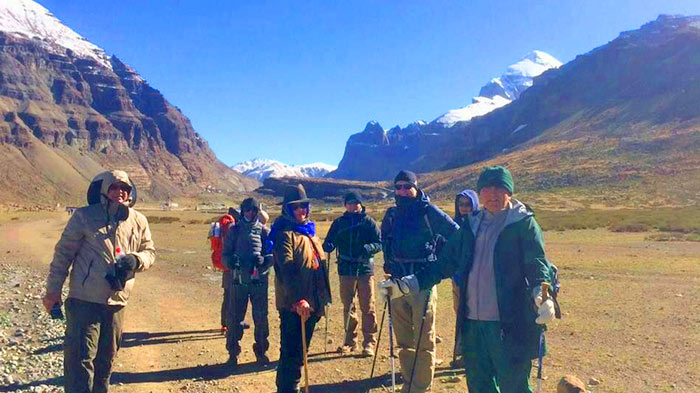 Today, the mountain is a sacred site, and is renowned for never having been climbed, as a deference to the beliefs of these four religions. However, there is a trail around the mountain, which is the pilgrim’s kora route around Mt. Kailash for prayer and worship. The route is 52 kilometers long, and crosses over one of the highest passes in the region. It is not just popular as a pilgrimage kora, though. Many trekkers visit the mountain to partake of the three-day trek around this mystical black-rock pyramid of a mountain. The route is arduous, and not for the faint-hearted, but there is an innate sense of achievement once trekkers complete the kora route.

Known to be a spiritual place for Hindus and Buddhists, who come from all over the world in their thousands to make the pilgrimage around Mountain, Mount Kailash has a strange effect on those tourists that complete the kora route. A sense of having completed something important in one’s life is often felt by trekkers that have completed the route, and many say that they feel some kind of link to this sacred mountain.

In Tibetan Buddhism, it is widely believed that anyone that completes the kora around the mountain will be absolved of the sins of a lifetime. If this is indeed true, it could account for that feeling of relief and less stress that can be found in people that have completed the kora. The route around the mountain, staying in local monastery guesthouses of tents, is a great way to experience more about the culture of the Tibetan Buddhist pilgrims, learning more about their practices and the reasons why they often make their way around the kora by prostrating every body length for the whole 52 kilometers. - Check Ultimate Guide to Mt.Kailash Trek and How to Plan a Kailash Tour

What You Need to Know for Visiting Mt. Kailash and Mt. Everest

While some of the experiences of Everest and Kailash are very different, there are many similarities to traveling to these magnificent mountains.

Altitude is one of the major differences between Mount Everest and Mount Kailash, with Mount Everest being 8,848 meters high while Kailash is just 6,638 meters. However, when visiting Everest, for most tourists, the highest altitude that you can get to is at Everest Base Camp, which is 5, 200 meters above sea level.

Mount Kailash has a similar altitude for its visitors, especially for those that travel around the kora trekking route. The highest point of the trek is at Dolma-La Pass, which is 5,648 meters above sea level, one of the highest passes in Tibet. From Drirapuk Monastery, the first spot for overnight camping, to Dzultripuk Monastery, the average elevation is well over 5,000 meters, so both mountains have a similar altitude for tourists.

Distance from Lhasa to EBC and Mt. Kailash

Mount Kailash is also farther from Lhasa than Mount Everest (Lhasa to EBC 600km; Lhasa to Mt.Kailash 1300km), and takes several days longer to get to, though much of the route to Kailash follows the same route through Shigatse that you will take to get to Mount Everest.

However, the route you take after Old Tingri is less well paved, being a lesser road in Tibet and not the Friendship Highway anymore. The main similarity here is that you can drive directly to both mountains, as the route to Mount Kailash ends at Darchen, which is the start of the trek around the kora route.

Dining and Preparation for Visiting Mt. Everest and Mt. Kailash

Out in these outlying areas of Tibet, food is a little less western than in Lhasa, and for those that do not like Tibetan food, then it is advisable to bring food with you on both trips. The food in the west of Tibet is mainly Tibetan, with a few Chinese dishes when the ingredients are available. However, with few vegetables available in the west of the region, the majority of the dishes in the local guesthouses you can find will be of Tibetan cuisine.

When visiting Mount Everest, unless you are planning to trek from Old Tingri to the base camp, then lots of hiking and camping gear is not required. For Kailash, however, the trek around the mountain is a major part of the trip to the sacred site, and sturdy hiking boots, plenty of warm clothing to layer when needed, and a good tent and sleeping bag are a necessity, as it can get very cold at night at the campsites around the kora route, even in the warmer summer months.

For those that want to take a visit to both Mount Everest and Mount Kailash, the best option is the 15-day Kailash and Manasarovar Small Group Tour, which takes you from Lhasa, the Tibetan regional capital, through Shigatse to Mount Everest Base Camp, where you can get the best photos of the mountain. Then it continues on to Darchen, with a stop at the sacred Lake Manasarovar, one of the Great Three Holy Lakes of Tibet, before heading on to the sacred mountain. 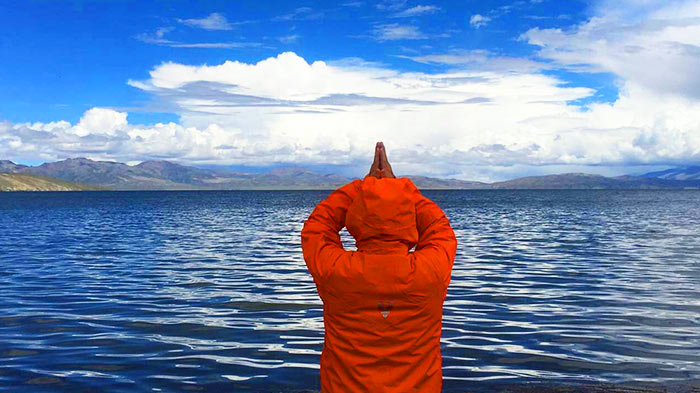 At Mount Kailash, the tour continues with a three-day trek around the mountain, following the kora route of the Tibetan Buddhist pilgrims, covering around 52 kilometers over the course of the trek. The kora route takes you through some of the stunning landscapes that surround this ancient sacred mountain, crossing high passes and traveling through lush, green valleys along the way.

One of the best tours to take for visiting both Everest and Kailash, this 15-day trip takes you across the vast Tibetan plateau, taking in the stunning views of the mighty Himalayas and the beautiful landscapes of Shigatse and Ngari Prefectures. A spectacular adventure that highlights both the amazing landscapes and the unique Tibetan culture and religion, there is no better way to experience Mount Everest and Mount Kailash together in one tour.

0 Comment ON "Mount Kailash or Mount Everest? Which One You Should Visit and What to Experience Respectively "