Originally, the Tibet was divided into three main regions, Ü-Tsang, Kham, and Amdo. Nowadays, the region is divided into seven prefecture-level divisions, of which six are prefecture-level cities and one is a prefecture. Lhasa, Shigatse, Chamdo, Nyingchi, Shannan, and Nagqu are all prefecture level cities. What is now central Tibet refers to the modern central Tibet made up of the eastern part of Tsang and the region known as Ü. In modern mapping, central Tibet incorporates the areas around Lhasa and Shigatse, and stretches as far south as Tsedang in Shannan Prefecture.

Geography and Climate of Central Tibet

Central Tibet is a large area within the region, and even in this one area the climate and geography differs as you travel west. In Lhasa, there are two main seasons, wet and dry, with the monsoon season falling between June and September. July and August see the majority of the rainfall, and the area around Lhasa is less affected by the rain shadow of the Himalayas than the lands further west. The hottest part of the year is the period from mid-June to August, with temperatures that have been known to get as high as 30 degrees sometimes. Winter is milder in Lhasa, with higher winter temperatures at night, sometimes as high as minus one or two degrees.

>>Check for the Lhasa weather feature and best time to visit

As you head west to Shigatse, the climate changes, and is a little harsher than Lhasa. At a higher altitude, the area has a semi-arid plateau climate, with less rain in the monsoon season due to the closeness to the Himalayas. Temperatures in summer do not get as high as in Lhasa, and in winter, the temperature can get as low as minus 13 degrees at night.

>>Check for the Shigatse weather feature and best time to visit

Throughout central Tibet, the best time to visit is from April to October, when the temperatures are comfortable and warm during the day, and not too cold at night. The monsoon months can bring a lot of rain, but in typical unique Tibetan fashion, it usually falls in the evenings and overnight, leaving the daytime warm and bright. If you are not afraid of a little cold, then traveling from November to January is possible, as the weather is not too harsh to enjoy the plateau landscape with a dusting of snow.

Traveling to central Tibet means that you are entering the most populated area of the plateau, with more towns and cities than anywhere else, and most of the total population of the TAR. This also means that the majority of the major attractions are within the area of central Tibet, including what is believed to be the cradle of Tibetan civilization.

In the area around Lhasa, there are many attractions, and the major ones include the Potala Palace and Jokhang Temple. Two of the most revered sites in central Tibet, the palace was once the center of Tibetan government, while the Jokhang Temple is the center of the Tibetan Buddhist religion and the most revered temple in Tibet. Monasteries abound in the area as well, with the Sera, Drepung, and Ganden monasteries all being the major three monasteries of the Gelug School of Tibetan Buddhism. 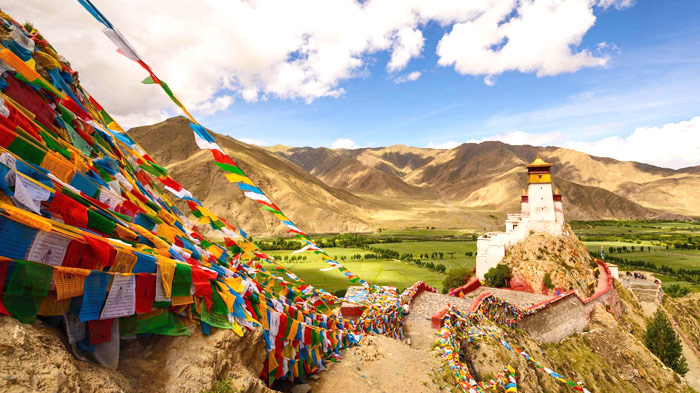 Built for King Nyentri Tsenpo, Yungbulakang Palace is reputated as the first building in Tibet

Shigatse has a plethora of interesting sights that would take forever to explore, but for the wise traveler, there are certain highlights that must be visited on any trip to the plateau. The first of these is by far the most astounding. A 32-meter stupa, built in the style of the Nepali stupas, is the centerpoint of the Pelkor Chode Monastery in the city of Gyantse, in Shigatse Prefecture. Constructed in 1427 by a rich local prince, the stupa has 108 chapels, an auspicious number in Tibetan Buddhism. In the city of Shigatse, to the west, is one of the largest monasteries in Tibet, constructed in 1447 and expanded several times over the following centuries to finally become the seat of the Panchen Lama, Tibet’s second highest religious incarnation.

Known as the “cradle of Tibetan civilization”, Tsedang in Shannan Prefecture is the location of the first monastery in Tibet at Samye, as well as the location of Tibet’s first building, the Yumbulakang Palace, built by worshippers of the “Bon” religion for the first Tibetan King, Nyatri Tsenpo, possibly in around 127 BC. Tsedang also saw the beginnings of Tibetan agriculture, and the first field is believed to be in Tsedang County.

Tour Lhasa and Shigatse via Gyantse

One of the most popular tour routes in Tibet, this tour from Lhasa to Shigatse, Tibet’s second city, runs through the city of Gyantse along the way. The route takes you first along the course of the Yarlung Zangbo River, and then on to the stunning sight of Lake Yamdrok, one of the Great Three Holy Lakes of Tibet. Believed to be formed from the earring of a goddess, the lake is spread out over a vast area, and is one of the most spectacular sights on the route to Shigatse. 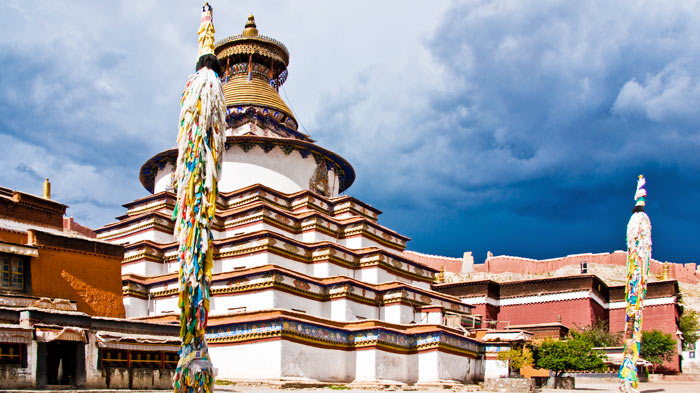 Gyantse Kumbum, the largest stupa in Tibet, is home to 108 small chapels

In Gyantse, there lies one of the most stupendous stupas in Tibet, the Gyantse Kumbum. At 32 meters tall, it is the largest stupa in Tibet, and the only one of its kind on the plateau. The stupa has nine levels which house 108 small chapels, an auspicious number in Tibetan Buddhism.

Shigatse is one of the largest cities in Tibet, and is the home of the famous Tashi Lhunpo Monastery, the seat of the Panchen Lama. As the Panchen Lama is Tibet’s second highest incarnation, the monastery is of great importance in Tibetan Buddhism, and has grown over the centuries since it was first commissioned by the first Dalai Lama.

Enjoy the Scenic Trek in Central Tibet from Lhasa

Trekking in Tibet is an exciting adventure, and one that you will always remember, with the stunning scenery of the plateau all around you. There are several great treks in Tibet, and in Lhasa there are three treks that are ideal for novices as well.

Experience 3-day Trek from Shalu to Nartang
Starting from the historic Shalu Monastery, around 20 kilometers southeast of Shigatse, this 3-day Shalu to Nartang trek takes you through several small villages and dry canyons along its trail, and is known as the shortest trekking route in Tibet. The route follows the ancient trade route that once existed between the two monasteries, and passes through Upper Lungsang and he ancient Ngor Monastery before reaching Nartang in the morning of the third day.

Enjoy Famous Trek from Ganden to Samye
The trek from Ganden Monastery to Samye Monastery is one of the most popular treks in central Tibet, and is widely regarded as one of the best hikes in the world. Offering an overview of Tibetan Buddhist culture as well as the high mountains, blue holy lakes, snowy passes, lush alpine meadows, serene local villagers, and random herders camps, the trek terminates close to the Samye Monastery, in Shannan Prefecture. 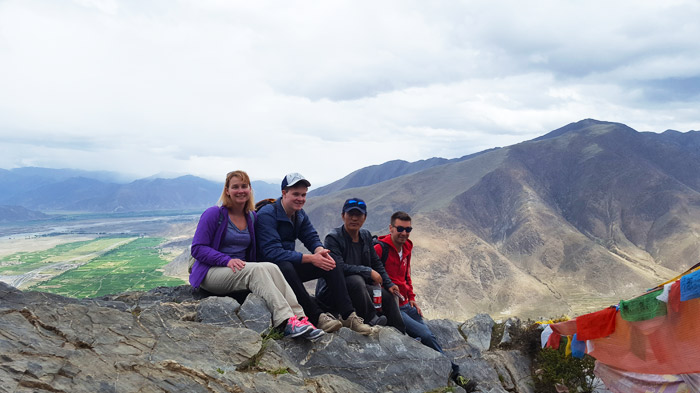 A very high-altitude trek, starting at 4,180 meters at Ganden Monastery, and passing through Shogu La Pass at its highest Point (5,250m), before ending at Samye at 3,540 meters, it is a challenging and arduous trek that is not for the faint hearted.

The best way to end this trek is with a visit to Yungbulakang Palace, the former palace of the ancient Kings of Tibet. Legend states that the palace was the first building in Tibet, and was erected by the Bon religious followers for the first King of Tibet, who fell from the heavens.

Other Options: Visit Chim-puk Hermitage and Trandruk Monastery from Lhasa

For other excursions from Lhasa into more of central Tibet, there are also plenty of other sites you can travel to, including the famous Chim-puk hermitage in the northeast of Samye. These holy cave shrines have sprung up over the centuries around the original meditation retreat of Guru Rinpoche, also known as Padmasambhava, the second Buddha.The practitioners of meditation at Chim-Puk were once well renowned for the ability to protect the fields of the farmers from hailstones that would damage the crops, and the site is a popular day trip from Samye. 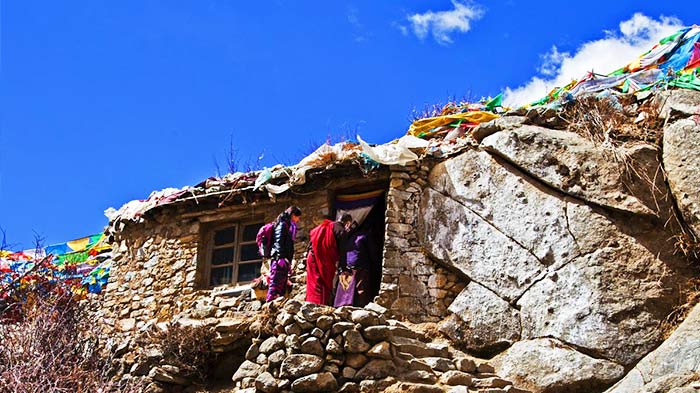 Close to Tsedang, in Shannan Prefecture, is the famous Trandruk Monastery, one of the earliest Buddhist monasteries in Tibet. Built around the same time as the Jokhang Temple and Ramoche Temple in Lhasa, it was one of the eight monasteries that were said to have been built over the dismembered remains of the demoness that once inhabited the site of the Jokhang Temple during the reign of the 33rd Tibetan king, Songtsen Gampo. Legend also says that, in order to build the monastery, the Tibetan king had to take the form of a giant hawk to defeat the local dragon that ruled the area. See the detailed itinerary of 7 Days Lhasa Samye Chimpuk Hermitage Tour