How to Plan a Budget Tibet Tour: 6 ways to cut down the cost of your dream Tibet tour

As a major tourist destination, Tibet receives thousands of tourists from all over the world. But it is a remote area with high altitude, harsh climate, and limited transportation, and the cost of a Tibet tour might be higher than expected. Planning a low-cost tour is important for those on a tight budget, and there are several ways to cut down the cost.

1. Join-in a Small Group Tour rather than Private Tour in Tibet

No matter when you travel to Tibet, joining a group tour in Tibet is always the greatest way to save money by sharing the cost with other travelers.

By joining in a Tibet Small Group Tour, you can cut down the cost of your Tibet tour on the tourist vehicle, driver, tour guide, and even the single room supplement. 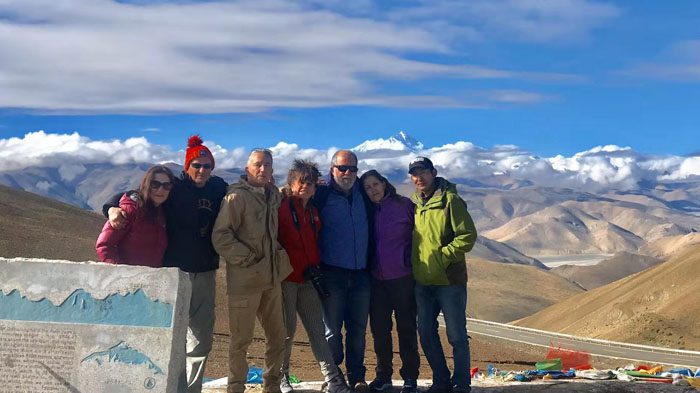 Join in our Tibet small group tour to enjoy the panorama of Himalaya at Gawula Pass.

Small group tours in Tibet allow solo travelers and small groups of tourists to join in on tours that are pre-set with fixed departure dates and itineraries.

You join other travelers from around the world that are interested in booking the same trip that you are. You can choose from a range of different tours with different departure dates and itineraries, so you have a wide range to choose from.

For example, if you are just 2 travelers traveling together, you need at least one local tour guide, a driver, and a tourist vehicle. Of course, the cost is only shared by two. However, if you join in on a tour group of 4 travelers, the cost is shared by 4. This saving increases exponentially with higher numbers on the tour, and most Small Group Tours only have a maximum of 12 travelers, so the group is not too large for the personal service you can expect from the guide. In this way, the cost of the trip can be cut down by as much as 50%.

Tips for Choosing the Best Group Tour in Tibet

There are hundreds of small group tours offered by varied travel agencies that you can find online. How to choose the best one is a big question.

Rather than simply comparing prices, which is more important when choosing a group tour in Tibet is the value for money. Cheap price is not always the best. You should pay more attention to the qualifications and experience of the travel agency, the frequency of tour departure, the diversity of the itinerary, and the reviews of previous tourists.

2. Visit Tibet in Winter with an Off-season Discount

Winter in Tibet is the low season for tourism, and as a general rule, this makes things cheaper for tourists that are hardier towards the colder weather.

Tibet is actually not as cold as many people think from November to March, which makes it a good time to come to the plateau region and enjoy a less costly tour of Tibet.

For those considering a winter tour in Tibet, there are many advantages in terms of the cost of the trip. As this is the low season for tourism, discounts are often given for major expenses, such as hotels, flights, and train fares, and you can benefit from this to make the trip cheaper. 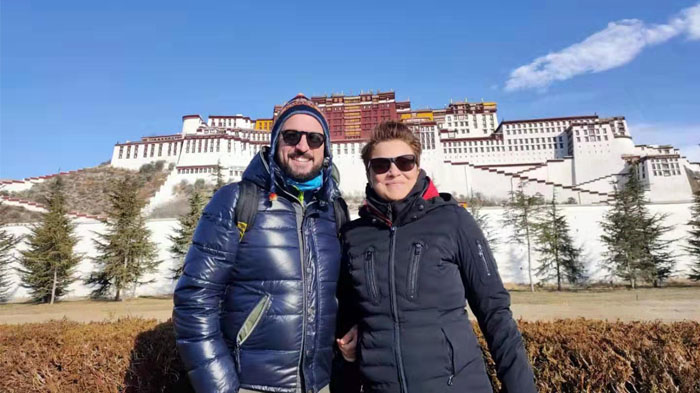 Winter is one of the best seasons to take a trip to Tibet since the air is dry and clear.

To try and get the customers in the winter, many of the hotels that are open throughout the year reduce the cost of the rooms in the months from November to March. This can mean that you can pay as much as half of the cost of the hotel in the peak season of summer.

The same discounts often apply to flights, since fewer tourists are traveling to the plateau in winter, and you can make good savings on winter flights to Lhasa. The trains are also cheaper in the winter, having reduced the cost of train tickets from the more expensive summer rates.

If you really want to save money on getting to Tibet, you can go to Tibet by train rather than by flight. Tibet Trains are always cheaper than the flights to Tibet from the same departure location, and you can further cut down the cost if you choose the hard sleeper berth instead of soft sleeper. The hard sleeper berth is not actually hard and is not bad as you may think, though it is not the most private option for travelers. Taking a Tibet train to visit Tibet in the low season is also a good way to reduce costs.

The cost of a hard sleeper berth is usually only around 65% of the cost of the soft sleeper, making a saving of around 35% on transportation to Tibet.

Avoid Taking a Train to Tibet in Peak Season

Generally, the soft sleeper is lower than the cost of a flight to Tibet from the same departure city.

However, in peak season, if you take a train to Tibet from popular gateway cities, such as Beijing, Shanghai, and Guangzhou, the train ticket sometimes may be almost the same price as a flight.

So it is highly recommended to avoid travel to Tibet by train from the popular gateway cities in peak season. Also, it is suggested to make your Tibet tour reservation as early as possible for visiting Tibet in the summer holiday.

At present, many trains are heading to Lhasa along the world's highest railway from mainland China. But some of them do not depart daily. You need to pay attention to the train schedule while arranging your tour to Tibet.

Trains to Lhasa from Beijing, Shanghai, and Guangzhou depart daily, while Tibet trains from Chengdu, Chongqing, and Lanzhou depart every other day.

The trains from Xining, the closest and cheapest of the seven gateway cities to Tibet, run every other day in the low season, and daily in the peak season.

4. Stay overnight in the Guest House and Hostel

Choosing the cheaper options on accommodation in Tibet is another way to cut the cost of your Tibet tour, and while the rooms may be cheaper, they are usually of good quality, clean, and comfortable.

The economic hotels with clean standard rooms, costing from around 15-25 US dollars per night, including a simple breakfast. 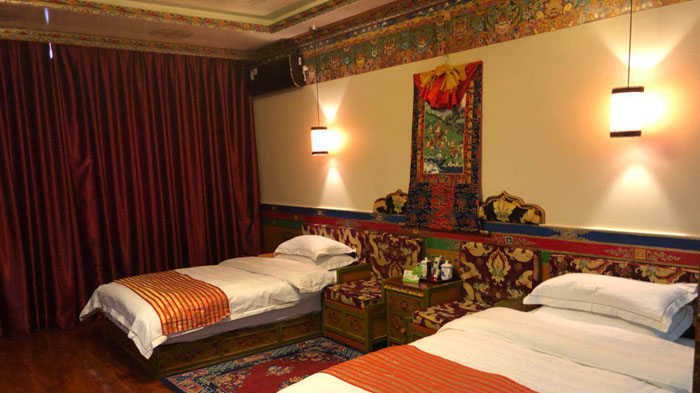 Accommodation can be very cheap in Tibet during the low season

This reduced cost can sometimes be reduced even further by discounts that may be available for touring in the winter when there are fewer travelers on the plateau.

Tips for Choosing a Proper Accommodation in Tibet

In fact, the overall level of accommodation in Tibet is lower than that in other tourist destinations in China. When you go further to the remote areas in Tibet, such as Mount Everest area or Mount Kailash, the living conditions go worse. Bringing your own sleeping bag is recommended due to poor accommodation and sanitation in remote areas in Tibet.

5. Budget Your expenses in Tibet

Generally, the price of a Tibet tour you paid for doesn’t include the meals, tips for the guide and the driver, and some other personal expenses in Tibet. So when you make the budget for a trip in Tibet, you also need to factor in your daily expenses in Tibet.

Cost of Dining in Tibet

Dinning in Tibet is not overly expensive. You can arrange food in Tibet by yourself to further reduce the cost.

Usually, the daily cost of lunch and dinner is around 80-100 RMB (13-16 US dollars) per person, due to the limited food supply in this remote area, and the high price of local food. A father showing his daughter how to eat Tibetan noodles.

However, you can arrange very simple food that can cost around 50-60 RMB per day. But please bear in mind the climate in which you are traveling. It is not advisable to eat too simple food in Tibet, which will not provide you with adequate sustenance, as you need more energy to travel in Tibet than most other places.

There are many special souvenirs to buy in Tibet, such as Tibetan incense, Tibetan Thangka paintings, Tibetan prayer wheels, turquoise bracelets, and some other handicrafts. Some of them are expensive due to the craftsmanship and materials used.

There are also kinds of inexpensive souvenirs you can take back home and share the unique flavor with your family and friends. You can bargain a little in Tibet. But don’t buy expensive jewels from the hawkers. Feel free to ask your guide to take you to an accredited shop to buy.

Also, there are supermarkets and modern malls in Lhasa city, where you can buy certain personal items that you will need for the trip to Tibet. Since the items have to be shipped in from mainland China, the cost can often be expensive in Tibet than in other cities of mainland China. And it gets higher as you travel further across the plateau. So it is a good idea to save money by bringing everything you need with you before you travel to Tibet. Things like your toothpaste, soap, shower gel, toilet paper, etc. can be bought for lower prices before you take the trip to Tibet, and can help you save money.

Tipping for Your Tibetan Guide and Driver

The tipping for your guide and driver in Tibet is not included in the tour cost offered by the travel agency. Generally, the tipping will be paid at the end of the tour and amount according to how excellent the guide work is and how many participants in your group.

If you join a tour group, you can tip about 6-12 USD for the driver and 10-15USD for the tour guide per day for the total. Also, you can share the cost of tipping with your group member.

If you already know what you want to do and where you want to go in Tibet, you can always book your Tibet tour with us well in advance of your expected travel dates. For those booking well in advance, we can offer some great discounts on the cost of the tour. Simply come and speak to one of our professional tour consultants to find out more. 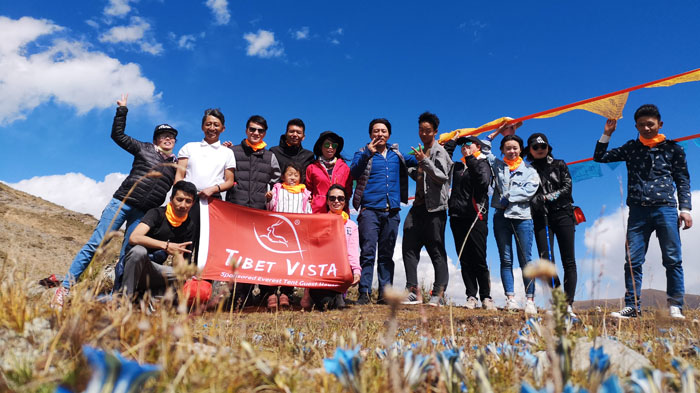 Travel in Tibet with Tibet Vista, you'll have a memorable journey in the roof of the world.

Planning a budget tour of Tibet is not as hard as you might think. While Tibet can be an expensive place to visit, it does not have to be too expensive for budget travelers to reach, and you can make some great savings on the overall cost of your trip by being a little frugal and choosing the right options. Traveling in winter, taking the train, and joining Small Group Tours can help make that dream of traveling on the Roof of the World come true.

0 Comment ON "How to Plan a Budget Tibet Tour: 6 ways to cut down the cost of your dream Tibet tour"