Guge Kingdom, A Glimpse of the Ancient Tibetan Empire

A thousand years ago, there existed a kingdom known as the Guge. The kingdom lay within the lands of Tibet. Hidden within what is today known as Zhada County in the Ngari Prefecture, the Guge Kingdom fell in the last half of the 17th century. Lasting for over 700 years, the kingdom was vital to the development of the area, both religiously and regarding trade. 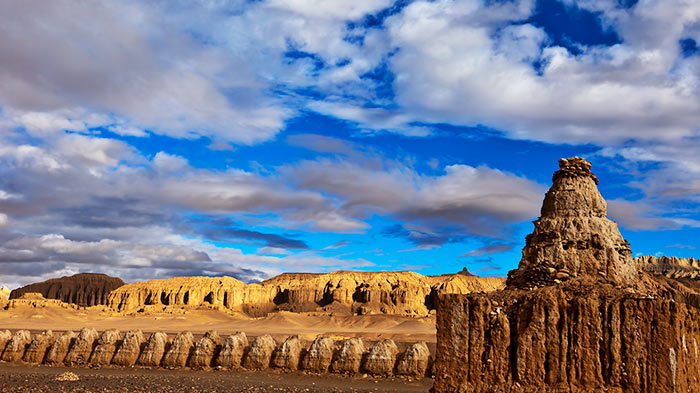 The Guge kingdom lay within the lands of Tibet.

Today, all that is left of this once great prosperous kingdom is a collection of stories and legends, along with a handful of ruins - left in exquisite condition. Encircling a mountain, over 400 rooms have been found to date, with the potential for more to be found in the future.

What is the Guge Kingdom and what happened to it?

The first time westerners visited the Guge kingdom was in 1624. Two Jesuit missionaries, known as António de Andrade and Manuel Marques, noticed irrigation channels and features they would only expect in an area populated by humans. Shortly thereafter, they were admitted into the kingdom as guests and teachers. Whilst they had been allowed to teach about Christianity inside a monastery, it is said that the Guge’s pro-Buddhist enemies – the Ladakhis – laid siege to the Guge Kingdom (Not the same type of Buddhists as you see here). Ultimately, the Guge surrendered and were all by wiped out by the Ladakhis: ending their kingdom. 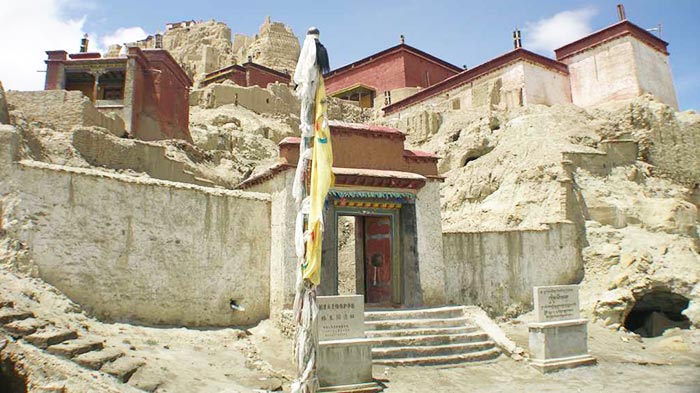 The Guge Kingdom is something which time has almost forgotten.

Whilst this is the story, little evidence exists to support it. In a way, the Guge Kingdom is something which time has almost forgotten. Despite having had 16 kings, it has continued to guard the almost-secrets of its beginning and its fall. After its fall, it wasn’t until almost 300 years later that the Guge kingdom was brought back into the public sphere by the Italian scholar Giuseppe Tucci. Whilst still relatively unknown to this day, the Guge kingdom is a fascinating piece of Tibetan history and one which should be visited.

Where to go: the Grand Palace

A visit to the grand palace is a visit to one of Tibet’s most treasured and mysterious ruins. You’ll find over 720,000 square meters of property, set along the banks of the Xiangquang River and rising over 300m tall. Inside, 445 rooms have been discovered to date, with 879 caves, 58 pillboxes, 28 Buddhist pagodas, and (mysteriously) 4 secret tunnels! 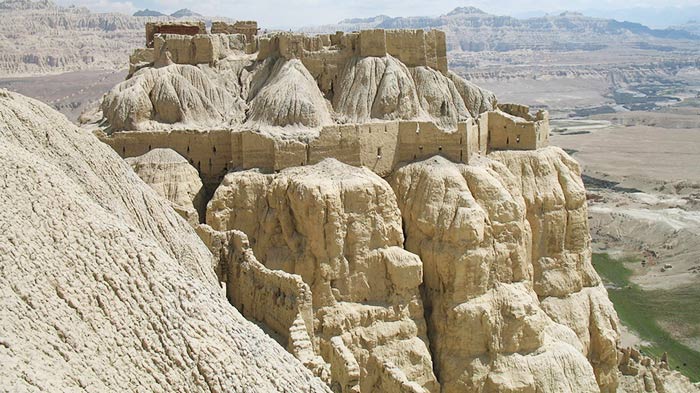 There are still some remarkably well reserved city walls.

As you travel through the rooms, you’ll find yourself making your way up through the mountain and towards the top. The rooms in the Guge Kingdom are piled on top of each other in such a way that it seems almost haphazard.

Surrounding the grand palace of the Guge Kingdom, there are still some remarkably well reserved city walls. The edges of the city walls are marked by four pillboxes. Throughout the whole of the ruins, you’ll find a range of well-preserved artifacts and relics from the time of the Guge Kingdom. Farmer’s instruments, clothing, shields, and arrows can be found inside and outside. They offer a unique look at the culture of the Guge Kingdom and how the people there lived over 300 years ago.

What to see: view the Frescoes

One of the most outstanding aspects of the Guge Kingdom, which you can see today, is that of the Frescoes. Frescoes are basically wall painted murals. They reflect the art, philosophy, and culture of the people who created them. The kingdom of Guge is no exception. The frescoes you’ll find here are incredible and unique. 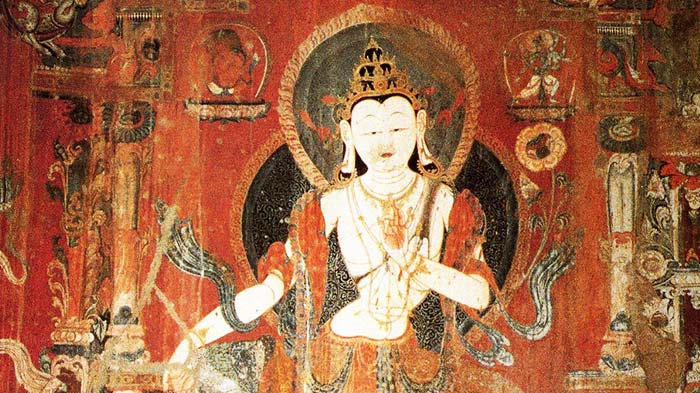 The frescoes you’ll find here are incredible and unique.

What to admire: the 28 Stupas

The 28 stupas are basically pagoda-shaped Buddhist monuments. They stand erect throughout the landscape of the Guge Kingdom, reflecting both the people’s belief system and the ornate patterns and structures which they were capable of producing. 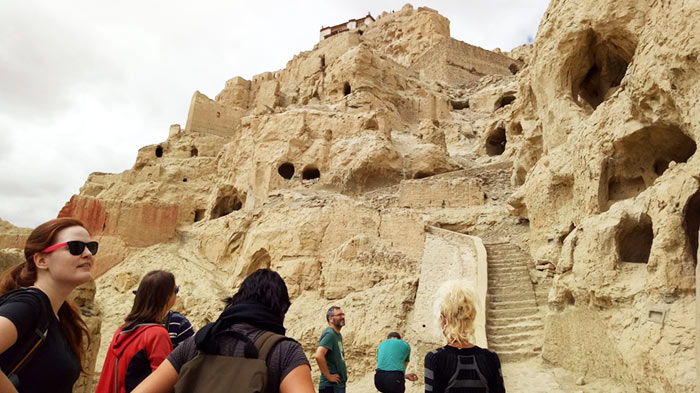 A visit to the grand palace is a visit to one of Tibet’s most treasured and mysterious ruins.

The best time to visit the Guge Kingdom is the late Summer or Autumn. The area can sometimes seem as though it’s inaccessible, hidden seemingly in the middle of almost nowhere. Whilst this is not entirely true (the land is accessible, especially by taking a Guge Kingdom Tour), it does have its stories. 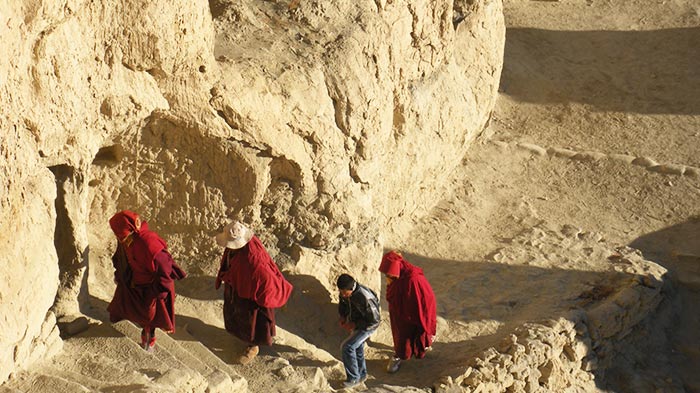 The best time to visit the Guge Kingdom is the late Summer or Autumn.

During the first half of the 20th century, it is said that the Tibetan government sent a soldier to collect taxes from Guge. Returning to the court, the soldier was found frightened and fearful. When asked what had happened, he said that all he had found was a world of sand. Taxes were never collected from Guge.

Whatever the reason for the Soldier’s fear, the kingdom of Guge is not a place to be meddled with. Nature has tried to claim back what was once its own, and those heading there can meet high temperatures (as you would expect from a desert). Whilst the night may be cold, the day is equally as hot. Autumn helps to find the right balance between the two.

Night time is a great time to take pictures of the Guge kingdom. The starry night sky, combined with the rolling mountains in the background, make for one of the best Tibetan nighttime photo ops there is. However, remember that Tibetan nights aren’t the same as the day! If you do decide to do this, make sure that you wrap up warm. Tibetan nights can be bitterly cold; surprisingly different than the daytime desert temperatures. 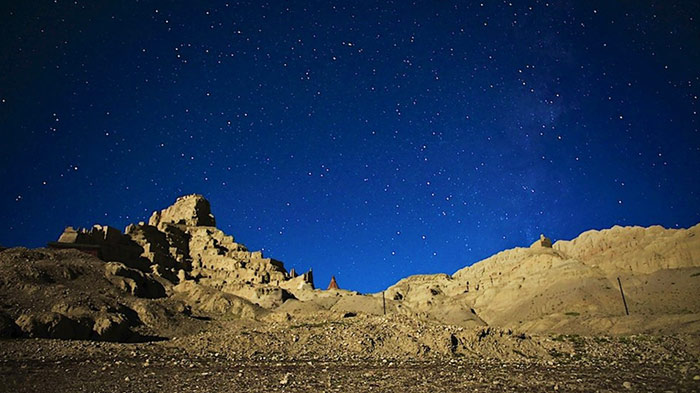 Night time is a great time to take pictures of the Guge kingdom.

Moreover, don’t expect to have easy access to accommodation. There is nowhere to spend the night indoors within the Guge Kingdom. The nearest place to stay is in Zhada county. Whilst it’s reasonably close, make sure you figure out what your sleeping plans are before you go. Either that, or make sure to pack a tent.

Say no to photo ops

The daytime is probably the best time for viewing the frescoes (mural wall paintings) inside the Guge Kingdom. However, you CANNOT take pictures of them. Whilst you might need to bring along a flashlight to view them, don’t disrespect the people here and take pictures. Also remember that taking pictures of Buddhist statues can make locals and religious Buddhists feel uneasy. It’s mostly fine to take pictures of smaller and less ‘on-display’ things, but try to stay away from the larger statues, ornaments, and frescoes. 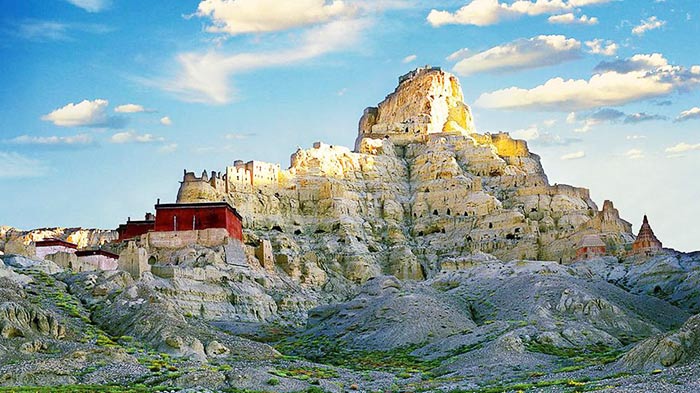 The Daytime of Guge Kingdom

Other travel tips for the Guge Kingdom

If you’re thinking about heading out to visit the Guge Kingdom, make sure that you organize suitable accommodation before you go. The nearby Zhada country offers some places to stay, but within the Kingdom’s area itself, you’ll have to make do with camping. Whilst this offers some good nighttime views, it can get a little cold. 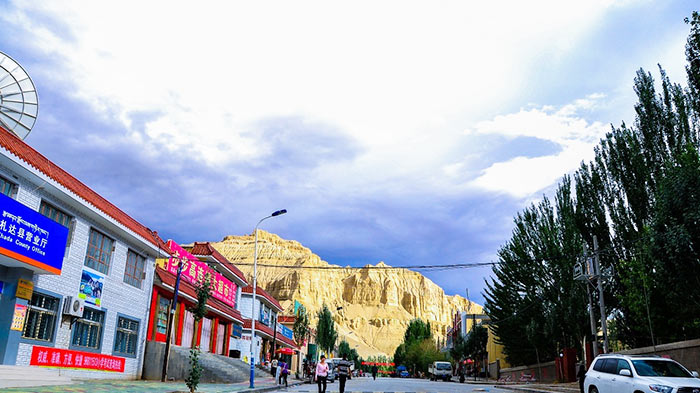 The nearby Zhada country offers some places to stay.

Make sure that you prepare yourself for the altitude change. Ascend slowly if you travelling from Lhasa, not all in one go. Remember, if you start to feel faint, don’t push it. If you start to feel really bad, head down until you feel better. Heading up this high is a great experience, but it can be jarring for people who haven’t done it before.

In order to get the most of your time in the Guge kingdom, along with guidance and help getting there, staying the night, and finding something to eat, why not take part in a Guge Kingdom tour? It’s guaranteed with make your journey easier, especially if you haven’t been somewhere like here before. Remember, if you’re going to head to the Guge Kingdom on your own, you’ll need a visitor’s permit to travel here. This can be picked up for free at your local police station in Tibet, and delivered on the same day.

0 Comment ON "Guge Kingdom, A Glimpse of the Ancient Tibetan Empire"