FAQs on How to Travel from Kathmandu to Lhasa

Kathmandu is the capital of Nepal, on the western side of the mighty Himalayas in Asia, and is one of the most exotic cities in the world. As one of the main gateways to Tibet, Nepal is the only country that has international access to the Tibet Autonomous Region of China, and travel from the capital, Kathmandu, to Lhasa in central Tibet is one of the more popular routes for tourists to the plateau region.

From Kathmandu, Lhasa lies 987 kilometers away by road, crossing the border at Gyirong Port and driving across the vast Tibetan plateau to the capital. The highest capital city in the world, Lhasa is the center of Tibetan culture, and the largest city in Tibet. Known as the City of Sunshine, this ancient capital is around 607 kilometers from Kathmandu as the crow flies.

Travel between these two Himalayan capitals can be done overland or by flight, and the choice is which way to travel is entirely up to you. While flying is the fastest way to get to Lhasa, the overland journey takes you to Mount Everest and a whole host of other amazing location along the winding route to Lhasa.

How to Travel from Kathmandu to Lhasa by Air?

As the most convenient way to travel from Kathmandu to Lhasa, flights from Nepal’s Tribhuvan International Airport, the only international flight into Tibet, are popular among many of the international tourists heading for the plateau. 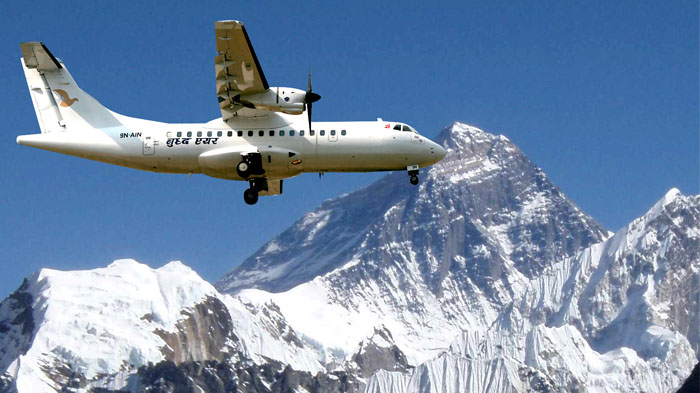 Grasping the chance of seeing the Mt. Everest Peak during your fly from Kathmandu to Lhasa.

Flights depart daily from the Nepali capital, taking around 90 minutes to make the trip across the Himalayas and the vast Tibetan plateau to the capital of Tibet. Ticket prices for these flights do vary greatly, depending on the season and the airline, and while some flights can cost as little as US$200 per person, others can reach as much as US$400 per person in the peak season.

Is it possible to travel from Kathmandu to Lhasa by road?

While flying is often the more popular way to get to Lhasa from Kathmandu, but, have you ever thought about enjoying the Kathmandu to Lhasa tour by bus? Now it is possible to travel overland, crossing the border between Nepal and China at Gyirong Port, the new international border checkpoint in Tibet.

The former overland route from Nepal to Tibet ran over the border at Kodari and Zhangmu, but this border crossing was severely damaged in the 2015 earthquake that ripped through the region. The Friendship Bridge was also severely damaged, and the border was temporarily closed while repair work began. However, aftershocks damaged the crossing even further, and the route was irreparable.

In 2017, on August 30, the Chinese authorities opened an old crossing from Nepal to China at Gyirong Port, after upgrading the checkpoint and ensuring that the Resuo Bridge was suitable for the crossing over the Trishuli River Gorge. This new crossing point has now become the main international border crossing for tourists and trade between Nepal and China in Tibet. 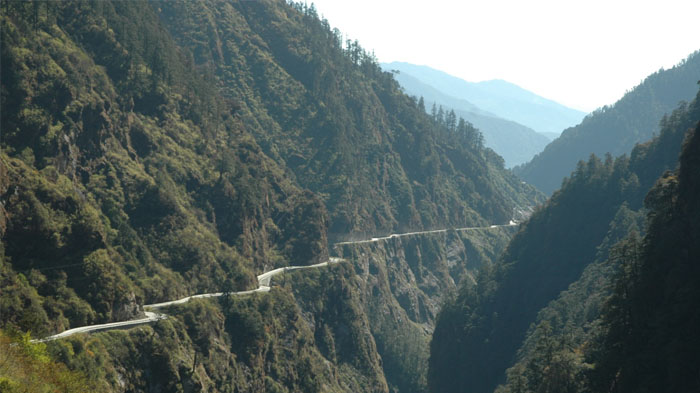 If you are planning a trip to Tibet from Nepal across the border to Gyirong Port, then you are going to need to make sure everything is properly organized. As well as being on an organized and pre-arranged tour of Tibet, you also need to have the tour operator arrange the visa from Nepal to Tibet and the relevant permits, which includes the Tibet Travel Permit, the Alien’s Travel Permit, and the Frontier Pass.

Is it possible to travel from Kathmandu to Lhasa by train?

While there may be the possibility of traveling from Kathmandu to Lhasa by train in the future, as yet there is no railway that runs directly from the Nepali capital to Lhasa. The Sino-Nepal Railway is still in the planning stages for the final sections from Shigatse to Gyirong Port and from Rasuwagadhi to Kathmandu. The railway is expected to open within the next five years, but no definite date has yet been given.

Is there any Kathmandu to Lhasa tour package?

If you are looking for a Kathmandu to Lhasa Overland Trip then you have a choice of package that we can offer for such a tour. You can choose the 8-day driving across Himalaya overland adventure from Kathmandu to Lhasa, which takes you cross the border at Gyirong Port to Lhasa via Mount Everest, Shigatse, Gyantse, and Lake Yamdrok, among other locations.

Majority of tourists choose to take the trip from Lhasa to Kathmandu, entering Tibet from mainland China and traveling across the plateau to end their tour in Nepal. Taking the trip in reverse is a more unique experience, as you get to visit Mount Everest early on in the tour, and end the tour in Lhasa, the stunning Tibetan capital, giving you the option to either fly back to Kathmandu or continue on into China to explore this vast country even more.

What is the cost to travel from Kathmandu to Tibet Lhasa?

The cost of traveling from Kathmandu to Lhasa varies, depending on the tour you choose to take, the time of year, the type of transportation you use, etc. Everything from the date of travel to your hotel type makes a difference in the cost of the tour, as well as whether you choose a Small Group Tour or a Private Tour to make the trip to Lhasa. 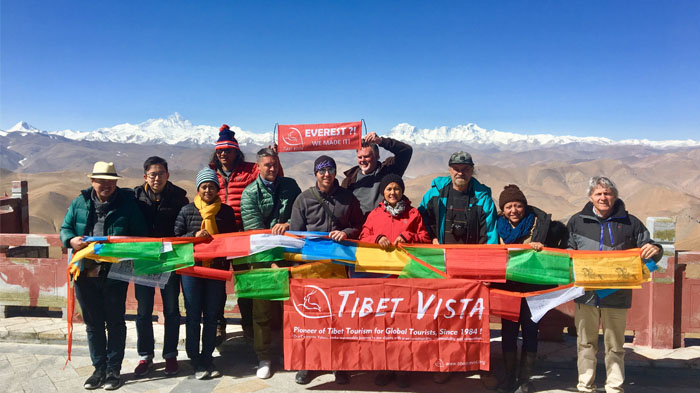 Small Group Tours crossing the Tibetan plateau from Kathmandu to Lhasa start at around 950 US Dollars per person, and for the best options on organizing your trip across the plateau, you can contact our professional travel experts, who can help with advice on the best options for your tour and help with all the arrangements to make your tour booking as simple as possible.

How about the accommodation in Kathmandu and Tibet?

Lhasa has some excellent five-star hotels, which can be arranged for you to make your stay in the capital as luxurious as possible, while Shigatse has some good four-star hotels that are the best in the area. There are also much cheaper options, from low-cost hotels to guesthouses and hostels, which can reduce the cost of your accommodation in Lhasa. 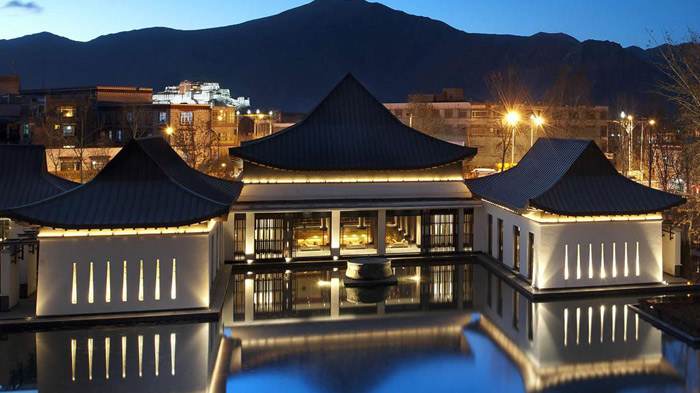 The best hotel of St. Regis Lhasa Resort with an awesome distant view of Potala Palace lurking behind.

Outside the major cities, accommodation is often less fancy, with most of the places to stay being hostels and guesthouses, some with very limited facilities. In the more remote areas, such as at Lake Namtso or Everest Base Camp, the guesthouses are very basic, without running water and Wi-Fi, but are a great way to experience how Tibetans live out in the remote regions of the plateau. Whilst trekking, you may also need to stay in basic guesthouses, or camp in tents, as there are some places that you will find along the trekking routes that do not have guesthouse accommodation available.

Insider tips:
1.) In spite that the overnight stay in guesthouses or in the tent has limited accommodation conditions, but the sceneries you can see in these places will be more splendid than anywhere in major cities of Tibet.
2.) Refer to the following site for more information about accommodations in Nepal and Tibet.

How to organize a Kathmandu Tibet Beijing tour?

If you are thinking about continuing on into China after traveling across the plateau from Kathmandu, that can be arranged for you. You will only be able to stay for the remainder of your visa from Nepal, which is normally only a 30-day visa, but you can depart from Lhasa into mainland China by train or flight to continue on to Beijing for a more exciting adventure in the Chinese capital.

From Lhasa you can get a direct flight to the capital of China, which normally takes around six hours. Alternatively, you can get a train from Lhasa direct to Beijing. One of the seven gateway cities to Tibet, trains run to Beijing daily, and take around 40 hours to cross the plateau and the rest of China to reach the eastern coast. The trains have sleeper cabins for your comfort, and are a great way to see the countryside as you steam along the rails to the Chinese capital.

You can also travel from Lhasa to many other great destinations in mainland China, and the choice of where to go is only limited by your own desires. Trains from Lhasa also travel to Chengdu, where you can see the giant pandas in their natural habitat, and to Xi’an, home of the famous Terracotta Warriors from more than 2,000 years ago. Alternatively, you can get the train to Guangzhou, on the southern coast, where you can explore the ancient city and then head on to nearby Hong Kong, or travel to Shanghai, the ancient trading port in eastern China, on the delta of the huge Yangtze River. Flights are also available to all of these major destinations from Lhasa.

Taking a trip from Kathmandu in Nepal to Lhasa in Tibet is one of the most exciting adventures on the planet, traveling over the mighty Himalayas from the exotic Nepali capital to the immense heights of the plateau and the beautiful City of Sunshine, Lhasa.