High up on the world’s highest plateau lies the Tibet Autonomous Region (TAR), the furthest point in the west of China. This high plateau region is well known as the home of Mount Everest and is also home to the world’s most sacred mountain, Mount Kailash.

The ancient Tibetan Empire once expanded to encompass much of several provinces in China, including parts of what are now Sichuan, Gansu, Yunnan, Qinghai, and Xinjiang. The ancient empire also stretched into parts of India, Nepal, Pakistan, Kazakhstan, and the mountainous end of Afghanistan.

Now, the Tibet Autonomous Region has many of these countries and provinces on its borders and provincial boundaries, though each still retains a population of ethnic Tibetans. Many of these ethnic Tibetan areas in China can be visited by international tourists without the Tibet visa that is required to visit the TAR, which still have traditional Tibetan ways of life. 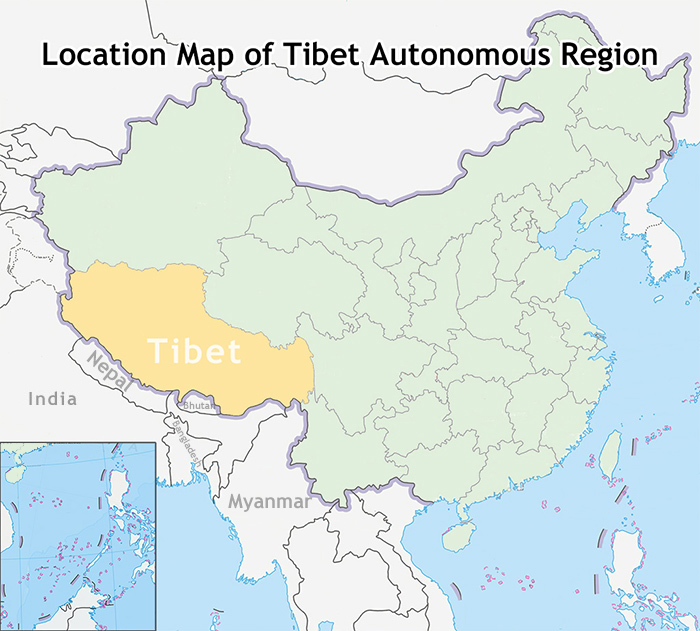 Four Chinese provinces have boundaries with Tibet, including Qinghai, Sichuan, Yunnan, and Xinjiang. Of these, most people know of Sichuan, and if you have been to Tibet, you most likely know of Qinghai. Yunnan, in the southwest of China, has only a small boundary with Tibet, while Xinjiang in the north has one of the longest boundaries of all.

Lying on the northeast end of the Tibetan plateau, Qinghai Province is a major Tibetan ethnic area outside the TAR and is a melting pot of the many different ethnic groups of China. Once a part of the area of ancient Tibet known as Amdo, Qinghai Province is named after the lake that lies just outside Xining, the provincial capital. Qinghai Lake is the largest lake in China and the name translates to “cyan sea lake” in English.

Many of the tourist attractions of the province are centered around Xining, the provincial capital and the climate of the area is mild, with the mild and cool summer weather making it an ideal retreat for many Chinese tourists. One of the most popular tourist attractions in the province is the Ta’er Monastery, also known as the Kumbum Monastery. The most important monastery of the Gelug School of Tibetan Buddhism outside the TAR, it lies on the spot where legend says the blood of the founder of the Gelug School, Je Tsongkhapa, fell on the ground. On that spot, a Sandalwood tree grew, which became known as the “Tree of Great Merit”.

Click for the most classic Xining and Tibet tour packages.

To the east of Tibet, lies the Chinese province of Sichuan, famous around the world for the unique Sichuan cuisine that has become the most popular Chinese cuisine outside of China. The province occupies most of the Sichuan Basin in the east and a small part of the Tibetan plateau in the west.

The main population of Sichuan to the west of the Sichuan Basin is Tibetan and resides in the Garzê Tibetan Autonomous Prefecture and the Aba Tibetan Autonomous Prefecture, in the west and north of the province. Sichuan and Chengdu are famous around the world for the unique Giant Panda Breeding Center, which lies on the outskirts of Chengdu. However, it is not the only tourist attraction in Sichuan, and the land to the west of Chengdu is filled with monasteries, stunning mountains, and scenic areas that will leave you breathless.

Click for the most classic Chengdu and Tibet tour packages here.

Located in the southwest of China, Yunnan Province has a very short boundary with the TAR, although parts of Yunnan were once part of the Kham region of the ancient Tibetan. Yunnan Province has only one Tibetan Autonomous Region, known in Chinese as Diqing and in Tibetan as Dechen. This small prefecture is one of the most stunning places to visit in southwest China, with the spectacular Hengduan Mountain range running through its entire length. However, the Tibetan ethnic people of the prefecture, whilst still being the largest, only make up for 34 percent of the total population.

Because of its milder climates and cultural diversity, as well as the stunning landscapes, Yunnan is a popular tourist destination for both domestic and international travelers. While majority of tourists in Yunnan are Chinese, there is a major increase in interest in the province by foreign travelers, and international tourism is slowly on the rise. Diqing Tibetan Autonomous Prefecture is also the location of the fabled Shangri-La, from the novel, Lost Horizon, by James Hilton, although the name of the town was deliberately changed by the local officials to promote tourism. However, Shangri-La in Diqing does lie in some of the province’s most stunning landscapes.

Click for the most classic Yunnan and Tibet tour packages here.

In the far northwest of China lies the Xinjiang Uyghur Autonomous Region, or just Xinjiang, for short. Bordering with Tibet to the south, much of the southern part of the region came under the control of Tibet during period of the Tibetan Empire, although this did not last for as long as the other areas of China to the east. Less than 200 years later, the decline of Tibetan imperial rule on the edges of the empire meant the entire region fell to the Uyghur tribes.

Xinjiang is the largest of the Chinese administrative divisions and is well known for being the region through which the ancient Silk Road made its passage from China to the west and Europe. The main passage for goods traveling both ways, Xinjiang was the gateway to China for Turkic traders from the Middle East and for the Chinese traders to send their wares to Europe.

Xinjiang has some of the most desolate areas in China within its boundaries, lying between the foothills of the northern Tian Shan mountain range and the desolate northern area of the Tibetan plateau. Most of the south of the region is arid and dry, with the Taklamakan Desertbeing the hottest and driest part of Xinjiang and an inhospitable and uninhabitable area.

16 Days Tibet to Xinjiang Land Trip is the most classic itinerary to overland between Tibet and Xinjiang, which is a trip of lifetime. 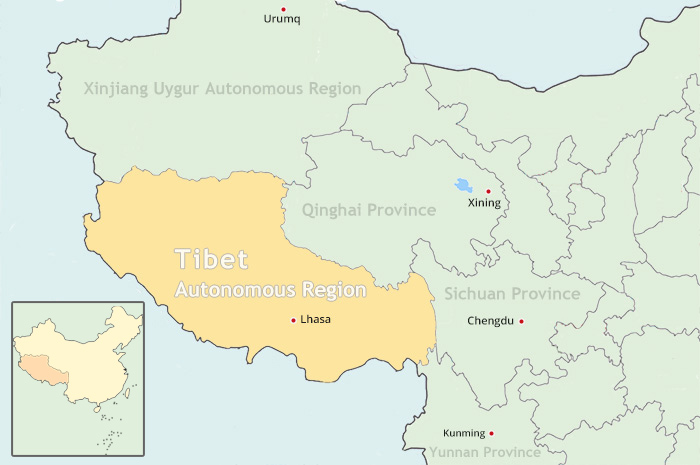 Tibet Neighboring Countries and their borders

Nepal, Tibet’s closest neighbor both geographically and politically, lies on the western border with China, and shares the western Himalayas with Tibet. The most famous mountain in the world, Mount Everest, is half in Tibet and half in Nepal, with the border going right across the summit. Well known as the best country in the world for high-altitude trekking, Nepal has a huge tourism industry built around Himalayan treks, adventure sports, and sub-tropical jungle safaris. Nepal is also the only country with international flights direct to Lhasa, and travelers to Tibet can enter the region across the Sino-Nepal border at Gyirong Port.

A unique country, Nepal has a climate that varies greatly from north to south, with the north being in the high Himalayas and the southern border with India being a sub-tropical climate zone with a heavy monsoon season. Nepal is also well known for its wildlife and is one of the few places in Asia where you can see the rare and endangered Bengal tiger, as well as elephants, crocodiles, rhinos, and a host of other animal life that inhabits the lower Terai region.

Click for the most classic Tibet Nepal tour packages here.

The second most populous country in the world, India borders with Tibet to the west and in two places to the south, either side of the Kingdom of Bhutan. The main border lies in the west, in Ngari Prefecture of Tibet, with the Indian states of Himachal Pradesh and Uttarakhand on the other side of the border. In the south of Tibet, the border with India lies between Nepal and Bhutan, with Sikkim on the other side, while to the east of Bhutan, the border lies on the edge of the Arunachal Pradesh state of India, an area disputed between China and India.

Despite having long border areas with Tibet, there are no tourist border crossings between India and China along those borders, and international and Indian tourists heading for Tibet are required to travel through Nepal or mainland China. The only border crossings allowed from India to Tibet directly are for the few Indian pilgrims that are permitted to cross the Nathu La pass between the Indian State of Sikkim and the Tibetan prefecture of Shigatse. This border crossing is permitted only for those pilgrims heading for Mount Kailash for the Kailash Manasarovar Yatra.

Here is the detailed information about how to apply for Tibet visa for Indian tourists.

Bhutan is Tibet’s closest neighbor in terms of religion and culture, however, the 470-kilometer border between Bhutan and Tibet has no border crossing point allowing international travel between neighbors. Buddhism was first brought to the kingdom by the Buddhist master, Padmasambhava, who is known in Bhutan as the Guru Rinpoche. A devoutly Buddhist kingdom, religion plays a major part in the daily lives of the Bhutanese people, in much the same way it does in Tibet. However, that is where the similarity ends. Buddhism in Bhutan, while still a form of Tibetan Buddhism, has different rituals and practices to their Tibetan neighbors.

Tourism in Bhutan is very different from anywhere else, though it does have similarities to Tibetan tourism in that tourists are required to book through a registered tour operator and must be escorted when touring by a registered tour guide in a private vehicle. The main difference is that the Minimum Daily fee in Bhutan covers all the expenses of your tour, including meals in your hotel. Click for the most classic Bhutan tour packages.

The border between Myanmar and Tibet is a very short one, amounting to less than 100km, which lies in the far east of the Tibetan Himalayas between Arunachal Pradesh and Yunnan Province of China. The only way to cross the Himalayas from Myanmar to Tibet is via the Diphu Pass, at the tripoint of China, Myanmar, and India. However, crossing is impossible here as there is no international border crossing point, and the route over the pass is little more than a goat track.

Northern Myanmar does have some Tibetan ethnic people that still live in the mountain areas close to the border, in small villages that have existed there for centuries. However, it is not possible to visit them as a tourist, as the northern mountain areas of the country are dangerous places to travel and there are no roads.

What is now known as Kashmir was also once a part of the great Tibetan Empire, in the areas now owned by both India and Pakistan. Ladakh, the area of Kashmir on the eastern side of the Himalayas, still has a large population of Tibetan ethnic people, living close to the border region with Tibet. The mountains in the area of Ladakh are known to the local Tibetans as the “land of high passes”, due to there being no passes across the mountains below 6,000 meters.

Despite there being a border with Kashmir, there is no border crossing point that allows international travel. Historically, Ladakh was born into being after the decline of the Tibetan Empire, when a Tibetan royal member fled Lhasa and took up residence in the area with his followers, establishing his own kingdom and the Ladakhi Dynasty, which lasted until the 17th century when it was incorporated into Kashmir. It is believed that there was once a well-used border crossing from Ladakh into Tibet that followed the Indus River back towards its source, though this has long since been lost or destroyed. 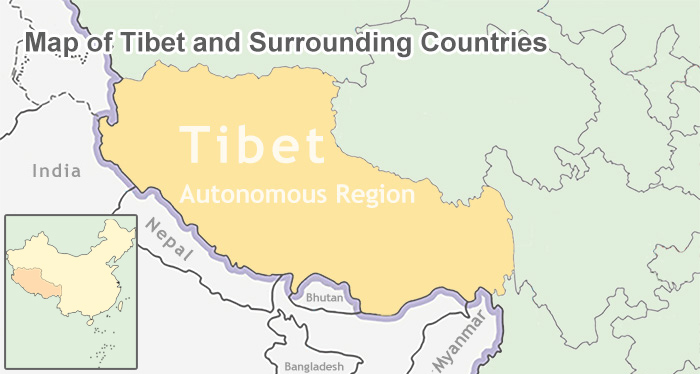