Cost on Food in Tibet

The food in Lhasa, Tibet, is more expensive than other cities of mainland China because most of the greens here are transported into the plateau from the mainland. For the same standard of the package that are supplied in the mainland, price is about twice as expensive. The cost on food in Tibet is usually around RMB80-100 per day, inclduing all meals. If you join in a group tour to Tibet, you can cut down the cost to RMB60-80. There is Tibetan, Chinese, Nepalese and western food available in Tibet. Generally, it cost you USD 10 on all meals per day in Lhasa if you do not go to luxury ones. Yet, it may cost you USD 15 per day on meals once you travel outside of Lhasa as the price is higher at those remote areas. Better to bring some snacks of high protein and calories in case you need it as the temperature may become low soon. Such snacks including chocolate, beef jerky, nutlet and instant coffee. 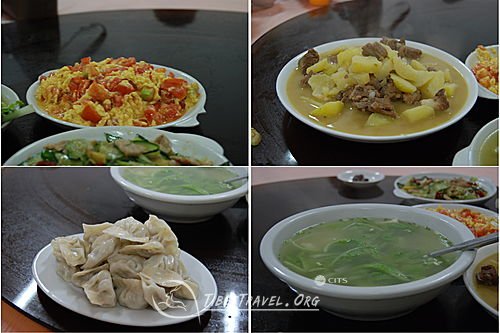 A lot of nice and comfortable restaurants can be found in Lhasa old district. Most of them are located near the Jokhang Temple and Barkhor Street. Some of them serve western food, Nepali and Indian food. Examples are Snowland Restaurant, Lhasa Kitchen, Naga French Restaurant, Tashi Restaurant. Each meal can be as cheap as USD$3 per person (price at 2005 October). On the southeast corner of Barkhor Street, there is a well-known Tibetan restaurant among backpackers -- Makye Ame - means beautiful woman. Sitting at this second-floor restaurant gives you an amazing view, especially at sunset, of the part of the Barkhor Street which is full of pilgrams moving in clockwise direction. The location of Makye Ame is unbeatable, but the food is nothing to write home about. The smaller Tibetan restaurants, especially the teahouses are much cheaper and serve more tasty food. A bowl of Tibetan noodles with bone soup cost only RMB 4. Although Tibetan restaurants are more traditional and full of history, to the western traveler the Chinese food might seem more diverse and more appealing than the greasy boiled yak meat typically served in the Tibetan ones. Westerners also might avoid the traditional Tibetan tea which is in fact black tea with yak butter in it and is typically being kept warm in heat insulating containers for quite some time. 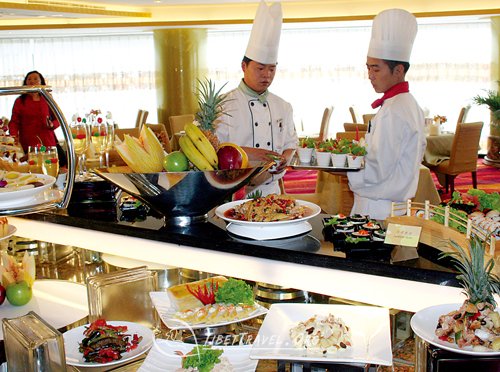 For Chinese restaurants, though usually poorly-decorated, meals are much cheaper. In some small restaurants, a dish and a soup just cost around RMB 10. A plate of beef noodles can be as cheap as RMB 5 and you can have a full meal including drinks for less than RMB 25! Most of the Chinese restaruants, however, serve Sichuan's spicy cuisine. In recently years, a lot of Chinese, most of them from Sichuan and Shannxi provinces, moved to Lhasa for business.