The Tibetan religion has had an extraordinary impact on the history, culture, and daily life of Tibetan individuals for more than 1,000 years. Nearly all of the people of Tibet are devoted to Tibetan Buddhism, and the religion is an essential part of the everyday lives of Tibetans. The introduction of Buddhism to Tibet was mostly vocal preaching, with most of the administration of the faith being taken up by the Buddhist masters who would instruct the people in the ways of Buddha. Buddhism has become the most popular religion in Tibet today, followed by Bon, the ancient religion of the plateau that has somehow survived mostly intact.

For anyone keen to learn more about Tibetan Buddhism and the way it affects the daily lives of the Tibetan people, there are some excellent off-the-beaten-track destinations in Tibet where you can delve a little deeper into the religion that changed the face of the Tibetan plateau. While there are some great places to learn about Tibetan Buddhism in and around Lhasa, the Drak Yerpa Monastery and the Chim-puk Hermitage are two of the more definitive locations that are well worth visiting.

Located around 32 kilometers from the city of Lhasa, to the east, and is sited at the location of some of the most ancient hermitage caves in Tibet. Lying on the hillside in Dagzê County, the monastery is around 10km up the valley from the entrance, lying below the ancient meditation caves in the stunning limestone cliffs.

The Drak Yerpa Temple was originally founded in the time of Songtsen Gampo by his Tibetan queen, Monza Triucham. However the use of the caves actually dates back to long before then, and are some of the earliest known meditation sites for the pre-Buddhist Bon religion. After the caves were used by Padmasambhava (Guru Rinpoche) and Atisha, Buddhist masters in Tibet, Yerpa became one of the most important meditation retreats in Tibet, and the monastery that originally lay in this site, known as the Yerpa Drubde Monastery, was the summer quarters of the Ramoche Monastery until 1959. Around 300 monks resided at Yerpa from the early 19th century until 1959. Monks are only now returning to the site, and the rebuilding work is being strictly controlled to maintain the site’s integrity.

The primary caves on the hillside are the Rigsum Gompo Cave and the Demdril Drubpuk, the place where Atisha ruminated before preaching on the hillside and in the valley. The Rigsum Gompo Cave is said to have the handprints of Yeshe Tsogyel, the consort of Padmasambhava, while the Demdril Drubpuk has impressions left behind by the fifth Dalai Lama. 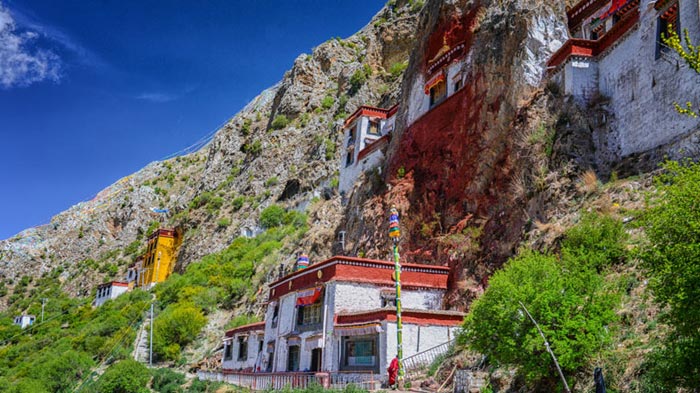 Drak Yerpa Monastery is one of the holiest caves for meditation in Tibet.

Chögyal-puk, the Cave of Songtsen Gampo, is one of the most amazing of the caves, with the focal point being the thousand-furnished statue of Chenresig, which is known as the Chaktong Chentong. This statue is constantly circumambulated by lamas in prayer, and in the corner sits a smaller statue of the Tibetan king himself.

Probably the most important of all the caves here is the Dawa-puk, or Moon Cave, where it is said that guru Rinpoche spent seven years in meditation. Unique stone carvings that are undated lay in the left corner of the main room of the cave, with an impression of the prayer seat of guru Rinpoche to one side, where his kneeling in prayer has worn into the stone over the extended period he was there.

How to Plan for a Drak Yerpa Monastery Tour

If you are thinking of planning a trip to Drak Yerpa Monastery, then you need to have all the right documents and be on a tour that includes the monastery as part of the itinerary. The only permit you need is the Tibet Travel Permit, which is required for travel into Tibet and around the area of Lhasa. Since the monastery is inside Lhasa Prefecture-level City, no additional permits are required. 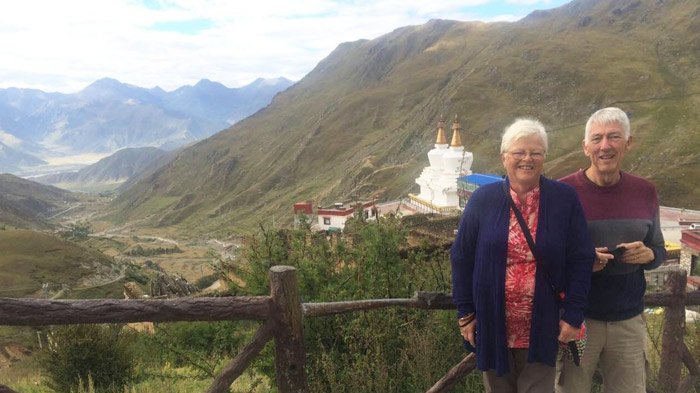 Our clients were paying a visit to Drak Yerpa Monastery in Tibet.

The best way to get to the monastery at Drak Yerpa is to make it part of the overall tour, and we have a great option for this with the 5-day Lhasa tour and pilgrimage trekking path tour. This gives you the chance to tour around Lhasa first, and then take a trip out to the monastery to explore the sights and the caves of this ancient valley.

At 4,885 meters above sea level, you will need to take care when visiting the monastery at Drak Yerpa, as this is actually more than 1,000 meters higher than Lhasa. Altitude sickness can be a problem if you are not prepared, so make sure that you have acclimatized properly in Lhasa before traveling, and try to refrain from too much strenuous exercise whilst at the famous meditation caves.

Chim-puk Hermitage, a Great Alternative to Samye Monastery in Shannan

The Chim-puk Hermitage is a collection of caves and shrines that are located to the northeast of Samye Monastery, which grew up over many centuries around one of the major meditation retreats of the Guru Rinpoche. The Tantric practitioners of Chim-puk were once famed for their unique abilities to protect the local fields of crops from hail storms.

The nearby Samye Monastery is renowned for being the first Buddhist monastery in Tibet, and was visited at the time of its construction by Padmasambhava, who quelled the demons that prevented the building of the monastery. During his meditation on overthrowing the demons, he spent much time at the warren of caves that is the Chim-puk Hermitage, meditating and praying, while planning the special dance that would quell the demons. 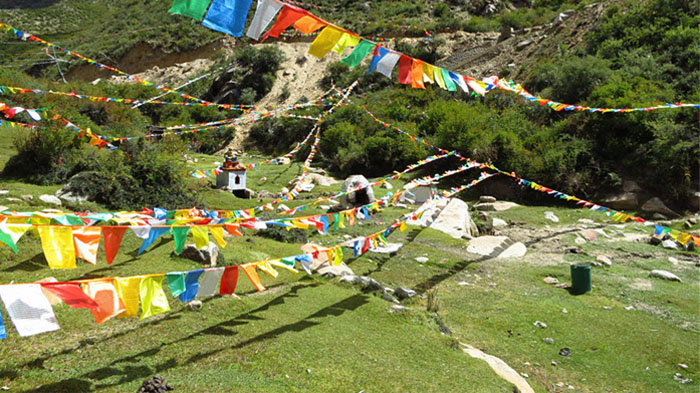 Quite and remote, Chim-puk Hermitage offers a nice retreat for a day hike.

The site is famous for having 108 meditation caves, 108 water springs, and 108 sky burial grounds, though many of the springs and burial grounds are no longer there. After their inhabitation by Padmasambhava, the caves also became a popular retreat for his consort, Yeshe Tsogyal, who spent a lot of time at the site when the guru was off spreading the world of Buddha in Tibet.

It is also said that the caves were a meditation retreat for the second Dharma King of Tibet, Trisong Detsen, who was responsible for the reintroduction of Buddhism in Tibet after it declined somewhat after the death of Songtsen Gampo. During the early years of his reign in Tibet, he would spend weeks at a time in the hermitage, asking for guidance on his spreading of Buddhism to all of the four corners of the empire.

The many caves of the hermitage are the main attraction here, especially the caves once inhabited by Padmasambhava, Yeshe Tsogyal, and Trisong Detsen. Handprints and footprints of the many Buddhist masters can be found around the site, and the most famous is the giant footprint on the Guruta Rock, which is said to have been left there by Padmasambhava himself, stamping his foot into the rock during a meditation dance. 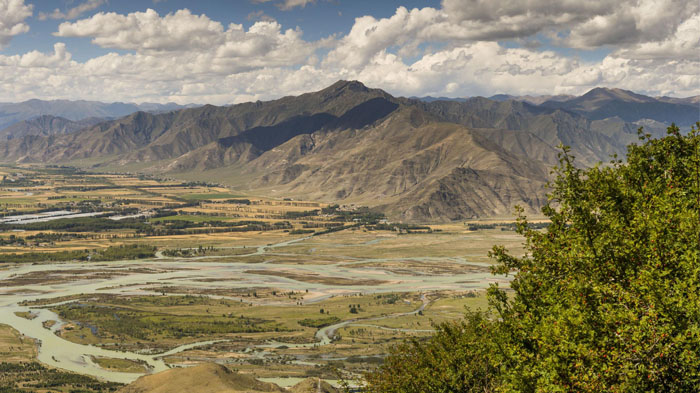 Below the cave of CHim-puk Hermitage lies the fertile Yarlung Tsangpo Valley.

The cave site is also a place where you can enjoy some of the region’s most beautiful scenery, looking out over the lush Yarlung Tsangpo Valley below, an unusual feature in an area that is surrounded by a desert-like steppe landscape. The area is ideal for a day-long hiking experience, starting from Samye and hiking the 4-5 hours from the monastery to the caves. Lush hills surround the hermitage on three sides, making it an ideal place for meditation and contemplation in Tibetan Buddhism.

The caves are still used today, and are inhabited by around 200 Buddhists, most of which are nuns that have foregone all worldly possessions to embrace the basic existence of the hermit. These nuns and monks believe that meditating in the same place where Padmasambhava gave instruction to his followers with bring them more understanding in their contemplation of Dharma.

How to Plan for a Chim-puk Hermitage Visit

If you are interested in taking a trip to Chim-puk, then one of the best ways is to take the trip as part of a longer tour. Our 7-day Lhasa and Brahmaputra Culture Discovery Tour is the ideal way to explore this sacred heritage site. You can make this trip a part of the whole tour, heading first to Yumbulakang Palace, before heading on to Samye and then to the hermitage site of Chim-puk.

Two of the most important sites in Tibetan Buddhism, these two ancient meditation sites are a great way to understand a little more about Tibetan Buddhism and the practices involved, as well as learning more about the ancient Tibetan Buddhist gurus such as Guru Rinpoche and Tsongkhapa, who also spent time at Drak Yerpa and has a statue in the Yellow Lhakhang Hall. The two sites are filled with Tibetan Buddhist history and are places where you can contemplate the meaning of life and the understanding of the Buddhist faith. 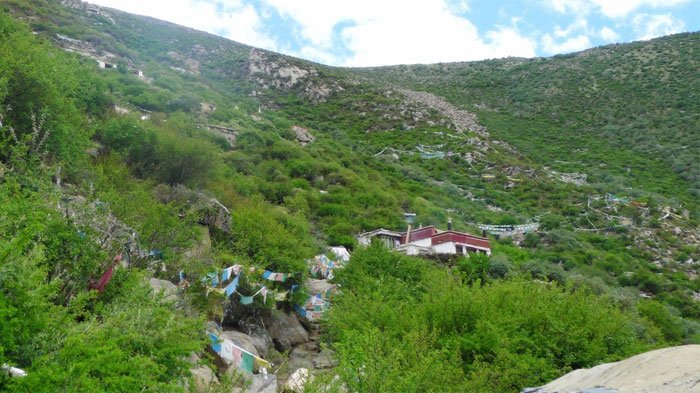 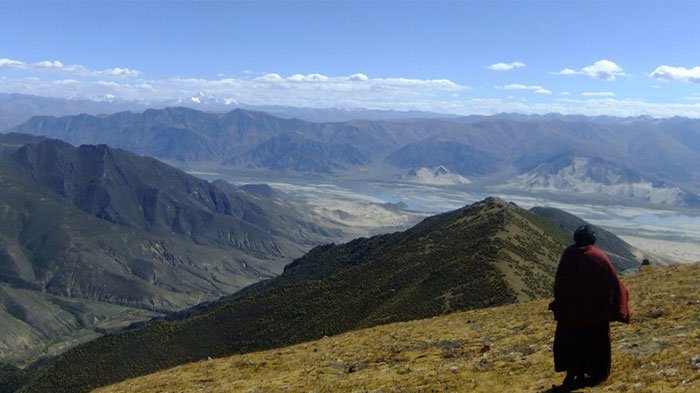