Yamdrok Lake, one of the three largest sacred lakes in Tibet, is a freshwater lake in Tibet. It is about 100 kilometers south of the region's capital Lhasa. The lake surrounded by snow-capped mountains means the Lake of Jade in Tibetan language.

Located in the southern part of the Yarlung Zangbo River, it is about 70 times the size of the West Lake in Hangzhou, with 21 isolated islands scattering around, on which different kinds of migrant birds inhabiting there.

Bird Island is the biggest paradise for waterfowls and wild birds in Tibet. Thousands of birds spreading their wings flying over the lake right in front of your eyes would be the most astonishing scenery you’ve ever seen.

Why we choose Yamdrok Lake for birding?

Yamdrok Lake is the largest habitat for migration birds in southern Tibet. The famous Bird Island is in Yamdrok Lake in Nagarze County of Shannan Prefecture, southwest China's Tibet Autonomous Region. On this island live thousands of wild birds such as bar-headed geese and gulls. It is only about 15 meters’ high, with rocks and stones covering the island. There is a small shabby stone room standing on this island, being used as an ad hoc dwelling for bird watchers in the breeding season. 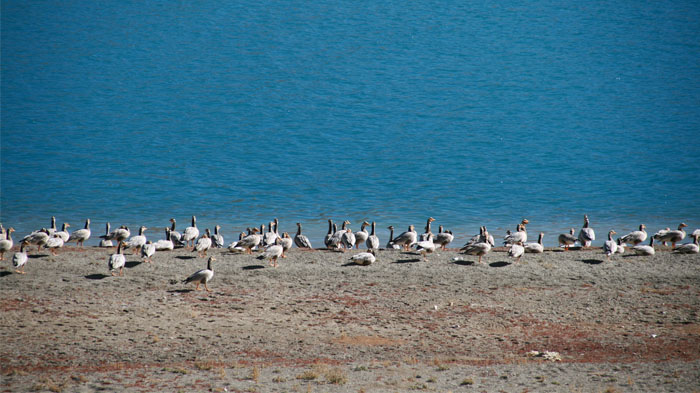 Birds resting at the soft bank of Yamdrok Lake

When the birds come, Yamdrok Lake’s shores and the island appear livelier. When paddling a little boat on the way to Bird Island, you will get lost in the picturesque view for sure. The glittering lake and the snow white jokul are way beyond description. The flocks of birds flying in the sky or playing in the crystal lake and rolling snow mountains far away are not only a feast for the eye, but an unforgettable memory that remains in your heart forever. Located not far from the capital of Tibet, Lhasa, Yamdrok Lake is an ideal location for bird watching, and is convenient for the ease of transport to the lake.

What birds can we find at Yamdrok Lake?

Birds on this island can be roughly classified into 3 categories: summer birds, winter birds, and passing birds. Summer birds are those which reproduce at one place in spring or summer, yet fly to south to spend winter. Bar-headed goose and brown-headed gull, the major species on this island, are also summer birds. Bar-headed gooses often lay eggs here between May and mid-June. Between late-June and mid-July, the brown-headed gulls will take over this island in turn. After multiplication, they all leave for the south in October and November. 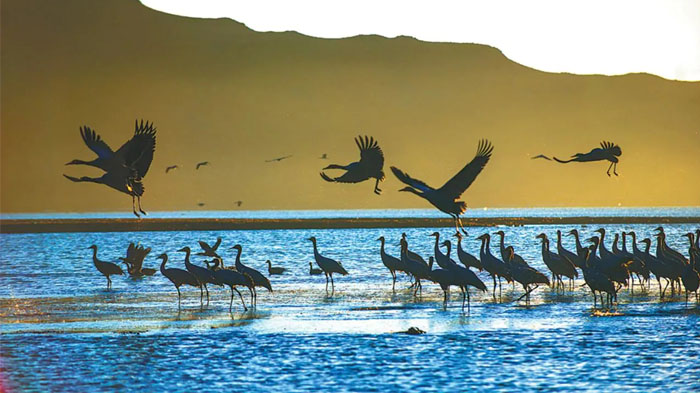 According to the local people, there are about 7500 bar-headed gooses, 7000 Brown-headed gulls, and 2800 nests here in most times. That’s exactly why you have to be extremely careful every second you step on the Bird Island - you may stamp on these cute eggs. Given the discretion that you may not know the intensity of eggs, just imagine a cloudless starry night in summer. For those traveling to the lake for bird watching, the best time of day to see the variety of birds that call this sacred lake home is at dawn and dusk, when the birds are leaving to forage or returning home to roost for the night.

Are there other places for bird watching besides Yamdrok Lake in Tibet?

Lake Yamdrok is not the only place in Tibet for bird watching, and there are plenty of other sites across the plateau where you can get a great view of the rare and extraordinary birds that inhabit the Tibetan plateau. Some are even closer to Lhasa than Lake Yamdrok, actually being within the city itself or close by.

The Lalu Wetlands is the largest urban wetlands in the world, and lies in the western area of Lhasa, known locally as the Lalu Wetland National Nature Preserve. Located just to the north of the Norbulingka Palace, this vast expanse of natural wetlands is surrounded on all sides by residential areas, but is still one of the popular birding sites in Tibet. 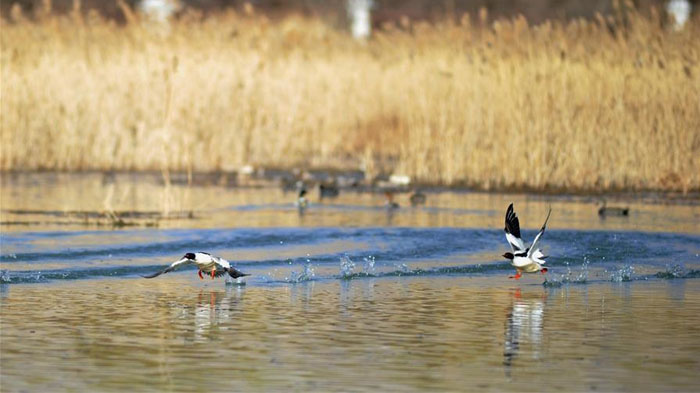 Two lovely and agile birds playing on the lake surface in the Lalu Wetland.

As well as the Ruddy Shelduck, Black-necked Crane, Pallas Gull, and Bar-headed Geese, you can also see such rare visitors as the Northern Lapwing, the Black Kite, the Upland Buzzard, the Eurasian Crag Martin, and many other migratory birds that spend the summer in Lhasa.

The Lhasa River is also a great place to see the migrating and indigenous birds in Tibet. Located to the south of the city, the riverbanks are often filled with a variety of wetland and migratory birds throughout the year. As well as being home to the bar-headed geese and the black-necked cranes, you can also find local species such as the Tibetan Long-Eared Pheasant, the Giant Babax, and the rare Brown-cheeked Laughing Thrush.

You can also find great places for bird watching in such locations as Linzhou County, Maizhokunggar County, Dagzê County, and the Zongjiao Lukang Park in Lhasa.

When is the best time for bird watching in Tibet?

There really is no “best time” for bird watching in Tibet, as there are different birds in the region in the different seasons, and you can find great bird watching spots with birds in them all year round. Even in the winter months, birds travel south from the colder areas in Northern Tibet and Mongolia to spend the winter in Lhasa and Lake Yamdrok. The most famous of the winter birds in Tibet is the stunning black-necked crane, which spends its winters in the areas around Lhasa, having flown down from the north of Tibet and around Lake Namtso in northern Lhasa.

Early spring and late autumn can be good times to see both the inbound and outbound migratory birds in Tibet, as some birds are already flying south for the winter in the area of Lhasa, while other local birds are beginning to depart for warmer climes to the south in India and beyond for the winter.

Summer is a great time to travel around the region and find the various local species of birds that sometimes cannot be found in the rest of the year, as they migrate south for the winter. Areas such as Lake Namtso in northern Lhasa, on the border with Nagqu Prefecture, are great for summer bird watching, while out in the west, you can find many local species of birds around the lakes of western Tibet, especially around Lake Manasarovar. 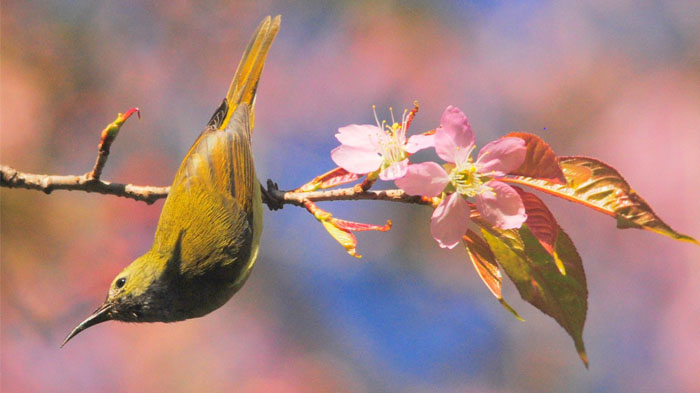 Fire tail sunbirds are found in valleys that lying at the border of China Tibet and Nepal.

Out in the west of Tibet, in the many valleys that lie close to the Tibet Nepal border, you can find such exotic species as the Brown-Winged Suzaku, the Tabby Thrush, the Chestnut-bellied Luscinia, green-throated sunbirds, Firetail Sunbirds, Brown-Necked Snow Finches, and many more species.

Insider tips:
For more bird-spotting chances, you are recommended to consider our Lhasa to Kathmandu overland small group tour.

What we need to prepare for a bird watching tour in Tibet?

What you use for bird watching in Tibet is really up to you, and depends on your own personal preferences. However, for those new to bird watching, a good pair of binoculars is really a must. As you are not able to get too close to the birds and their nesting grounds, powerful binoculars can make the difference between getting a glimpse and being able to see the eggs in the nest from a good distance.

If you are planning on photographing the birds in their natural habitats, then you will need to have good camera gear with you. This includes a camera body with detachable lenses, so that you can get the best zoom to catch the intricate details of the birds.

Ideally, a telephoto lens with a 100mm-400mm focal distance is recommended, and should have a detachable sun cover to reduce glare on the lens. A tripod can also be a useful addition when photographing birds, as it can make sure that the camera is steady and you get the best shot without any blur caused by your hands wobbling.

What are Dos and Don’ts when birding in Tibet?

The essence of bird watching is to watch only without intervention. You cannot catch any birds or try to take away any eggs. And maintain a respectful distance from the birds so that you do not scare them off for other bird watchers. This can also scare the birds away from their nests permanently, and the eggs will not hatch.

Bright colored clothing is not recommended either, as this can cause the birds to take fright. Avoid feeding the migratory birds, as human food can cause digestive problems, and regularly fed birds can quickly become pests.

Tibet is a haven for thousands of different species of birds, both in summer and winter. On this high-altitude plateau you can get to see some of the rare and endangered species of birds that are not often found anywhere else, and with the variety and number of sites across the region, there is always somewhere to go when looking for birds to spot, no matter what time of year you are traveling to Tibet. And if you are interested in booking a bird watching tour of Tibet, our expert professional advisors can help you with all of the details of the best tour for you. 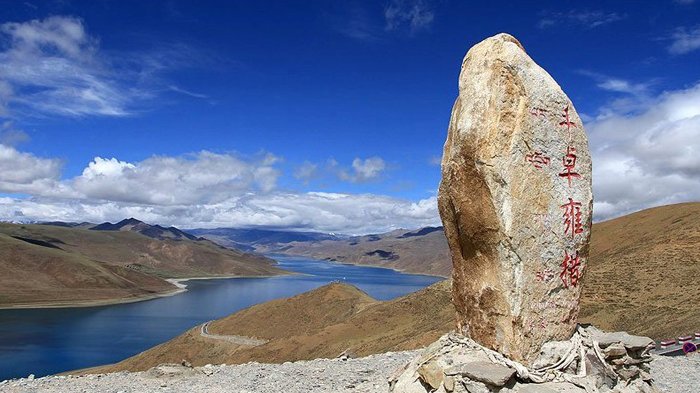 Yamdrok Tso Lake is famous for its turquoise blue water. 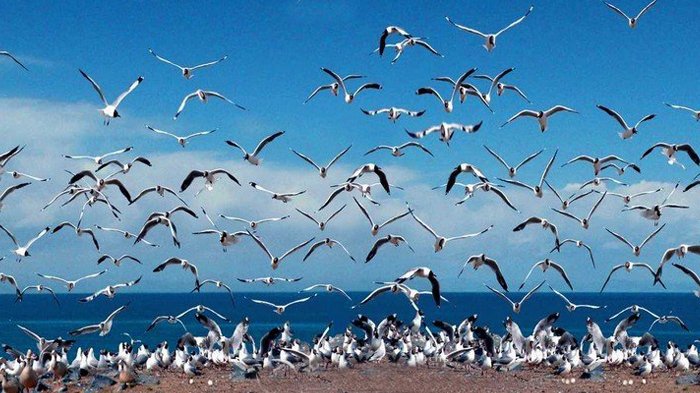 Beautiful scenery scenery in Yandrok Lake will leave you a deep impression. 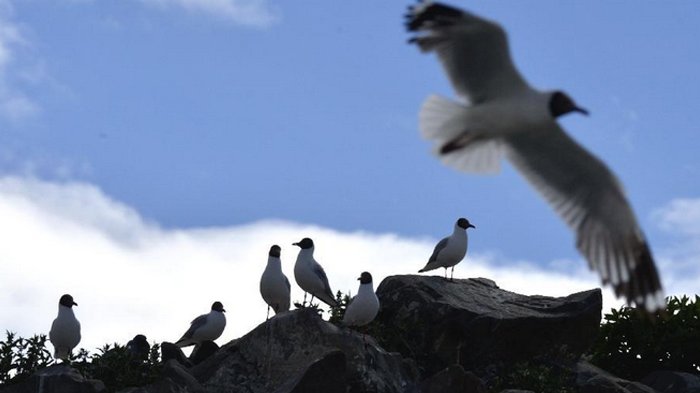 Many birds inhabiting on this island make it full of vitality. 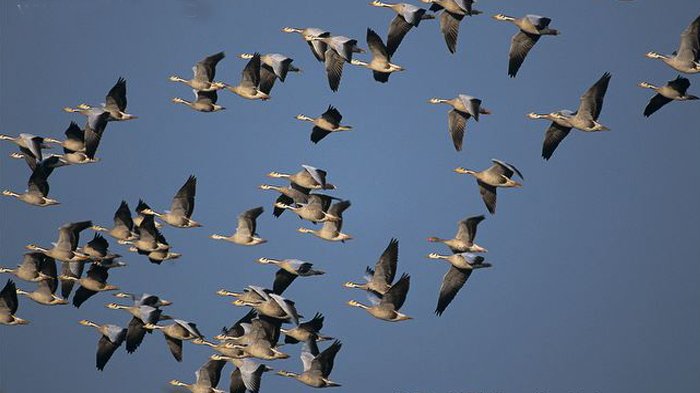 Bar-headed Gooses are flying in the blue sky. 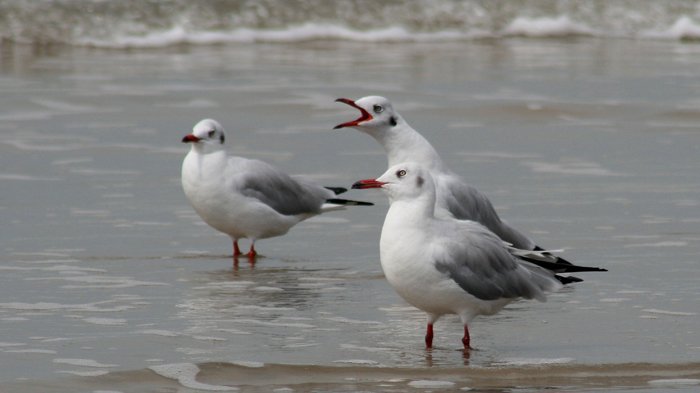 Brown-headed Gull is one of the major species on this island.