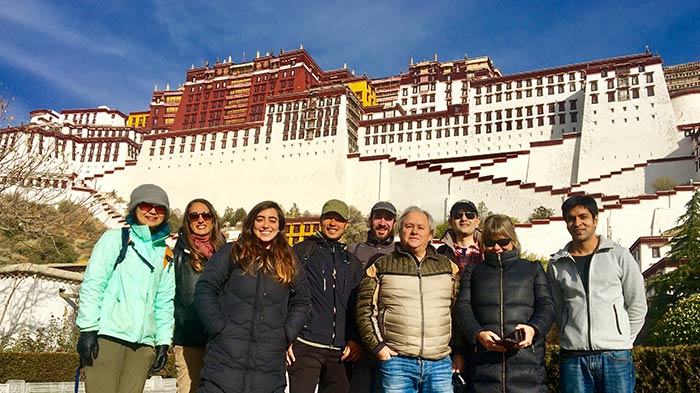 As the world’s the highest ancient palace, Potala Palace (3,767m) is a must-visit site for a Lhasa tour. Every tourist longing for Tibet photography tour would like to take amazing photos of Potala Palace. It opens from 8:00 to 18:00 and the admission fee is CNY 200(May.1 - Oct.31) and CNY 100(Nov.1 - Apr.30). Here are some helpful photography tips for you.

You can visit Potala Palace all year round, which has different sceneries in different seasons. It is appropriate to take pictures by front lighting within an hour around sunrise as Potala Palace faces south. The best photography angle is at the east of the Palace in the morning, while west of the Palace is best in the afternoon. There is music fountain performance at 20:00~22:00 pm in Potala Palace Square, where you can make full use of water stain on the ground to shoot the reflection of Potala palace.

Widely believed to be the best place to take pictures of Potala palace, Chakpori Hill is located to the southwest of Potala Palace, just a few minutes’ walk from the west gate of the palace. It is also called the Yao Wang Shan, meaning the Hill of Medicine King. There is a path leading to the top. It is the best viewpoint for sunrise and sunset at Potala Palace. On this hill, you can have a fantastic view of the city and its surroundings. There is an entrance gate leading up to the sightseeing platform. The best time is in the early morning, as one can take a picture of the palace in the first rays of the sun. 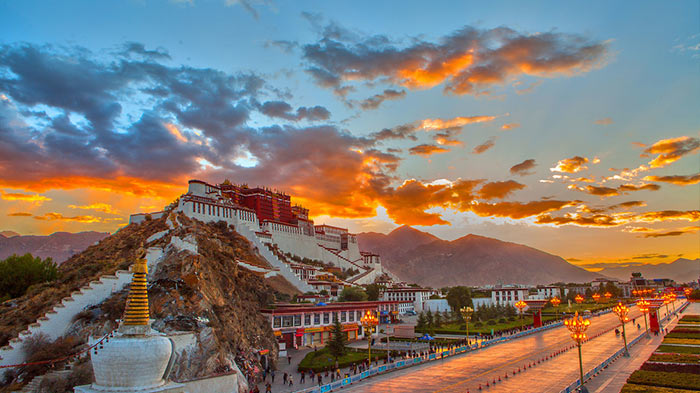 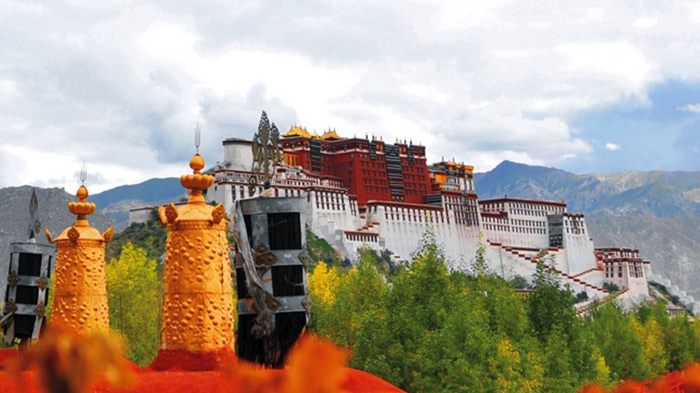 As the highest square on the world, the square is the best place to take a front standard photo of Potala Palace, especially when there is music fountain at night, you will be overwhelmed by the grand view. 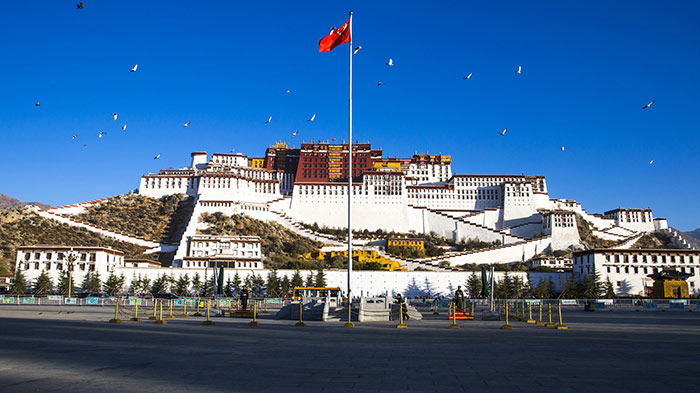 Dragon Lake Park is located at the north of Potala Palace, where you can take a photo of the reflection of Potala Palace. It's also the favorite place for Tibetan people to kill their leisure time. Taking a sip of sweet tea, you can enjoy the spectacular vista of Potala Palace and get a closer contact with locals in the Zongjiao Lukang Park. You can also take great snaps of Tibetan opera performance during the hilarious Tibetan festivals, like Shoton Festival. 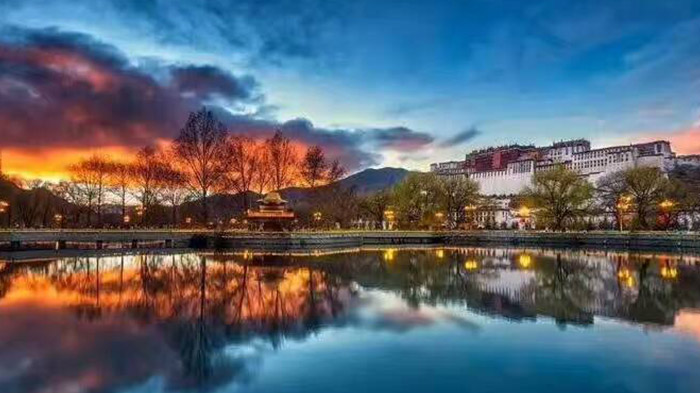 Located in the center of Lhasa, Jokhang Temple, built in the mid-7th century, is not only the earliest wooden architecture in Tibet but also the most glorious building during the Tupo Kingdom period. Jokhang Monastery is the spiritual center of Tibetan Buddhism, where Tibet's major Buddhist activities take place. Well-known as "the eyes of Tibet", Jokhang Monastery attracts tens of thousands of sincere devotees following the ancient pilgrimage route in and out, namely, Nangkhor Kora and Bhakhor Kora. 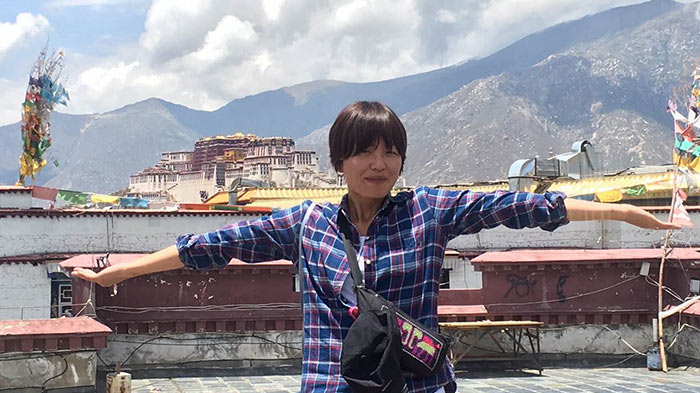 Standing on the roof of Jokhang Monastery, you can see the majestic vista of Potala Palace. It's suggested to take the golden prayer wheel and the iconic wheel of dharma as the foreground while photographing the pictures of Potala Palace.

Covering a total area of 6.2 square kilometers, Lalu Wetland National Nature Reserve has an elevation of 3,645 meters above the sea level. As the highest and largest natural wetland in Tibet, Lalu wetland provides a perfect inhabit for diverse faunas and floras. The wide range of wildlife, rich aquatic plants in front and the solemn Potala Palace in distance constitute a picturesque landscape for you to snap awesome photos. 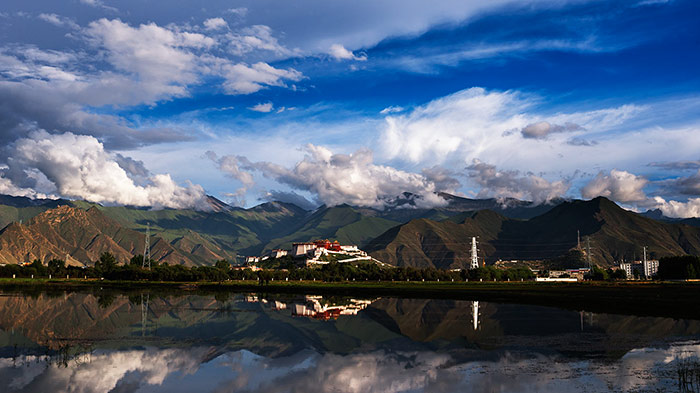 Lhasa River, also known as Kyi River, is the northern tributary of the Yarlung Tsangpo River. When weekends come, locals come to put up the tents along the bank and do some fishing, bathing, etc. Climbing up the mountain hill, you can capture the panoramic view of prestigious Potala Palace with rolling snow-capped mountain in the backdrop. 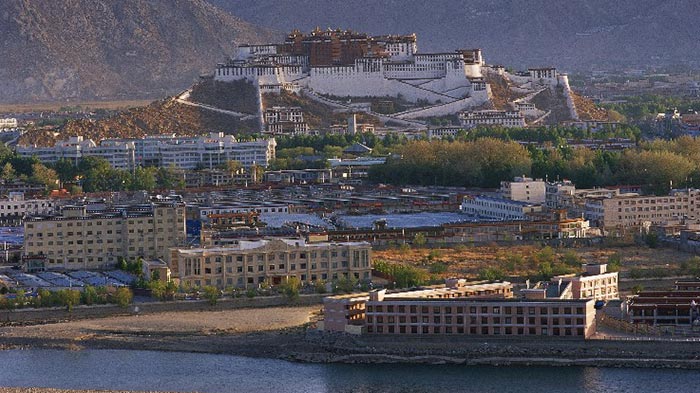 You may follow the religious kora by walking clockwise around Potala Palace and take some pictures of Potala Palace from different angles and spots. Wandering on the path circling Potala Palace takes you approximately 40 minutes. Generally, you're expected to spend at least half day or make full use of some small patches of time to visit the splendid Palace. The prime time is in the morning and evening.

1. The telephoto lens should be equipped to compress the depth of field while taking the full view of the palace at a long distance. While taking a close shot, wide angle, super wide angle and even fisheye lens should be used for exaggerated display. When you take photos inside a palace, if the flash lamp is not allowed to be used, try to take photos with a large aperture, high sensitivity, and a tripod.
2. Please prepare enough batteries and memory card, so as not to miss the beauty of Tibet.
3. Please remember to bring the relevant accessories to protect the camera, like UV mirror, lens hood, etc. It's difficult to repair the camera in Tibet and the cost will be much higher.
4. If you use a film camera, then take enough film, because the film in Lhasa is hard to buy and very expensive.
5. You can also use the ordinary digital cameras for its plenty of storage space and enough power supply.
6. A tripod is a must since it can effectively reduce the vibration of your camera. And it’s quite beneficial to long exposure in the dim light at dusk or dawn.

There are lots of restaurants on both sides of Beijing Road, such as seafood hotels, hot pot restaurants, sweet tea houses and Tibetan restaurants. They can meet a variety of tastes and needs of tourists. Xinhua hotel, located in Yutuo Road southeast of Potala Palace square, is the most convenient hotel for sightseeing. It has sightseeing rooms, sightseeing restaurants, and sightseeing observatory. The standard room with free telephone and broadband is CNY150 per room. Moreover, Airline Hotel at the east of Potala Palace is also a very convenient hotel for taking pictures. The price of standard room is CNY 260 with breakfast.

1. Entry tickets are hard to get, so it is best to book your Tibet tour in advance.
2. The travel route here is set strictly. Visitors have to enter from the east main entrance.
3. Any kind of liquid is not allowed, including beverages and mineral water, which yet can be purchased at a cost of CNY10 for one bottle at the hilltop.
4. The visit time is limited to 1 hour.
5. The only toilet is on the right side of the White Palace Square, and there is no restroom during the route of the rest time. This water closet is said to be distinctive and worth a try.
6. Be aware of the taboos of Tibetan Buddhism during the visit. Don't wear a hat or sunglasses; don't step on the doorsill; don't smoke in the halls.
7. No photos! Photography, video equipment, and other recording devices are not allowed, due to the sacred nature of the site and the relics held within the sacred walls.
8. Watch your steps due to the high altitude. Bring an overcoat as it is a bit cold and damp in the hall.
9. Take good care of your photographic equipment and avoid them to be damaged by squeezing or touching from others when there are too many tourists. You should also be careful to protect your equipment from any butter.