Top 9 Things You Must Do in Lhasa During Tibet Tour

As one of the famous holy cities in the world, Lhasa, at the roof of the world, has ranked the top tourist destinations in Tibet. Pilgrims, backpackers, and tourists swarm into the city each year. When touring Tibet, here are 9 things you must do in Lhasa.

Potala Palace, the landmark of Lhasa, is always the first thing that comes to mind when we talk about a trip to Tibet. Standing at the top of the Red Hill, the majestic palace is the center of Lhasa city, watching the changes of this holy city year by year.

It was the former winter palace of the Dalai Lama since 1649. Now it is a museum and is one of the three World Heritage Sites in Tibet.

No Lhasa tour would be complete without a visit to the Potala. It is not only a journey to trace back the history of Lhasa, Tibet by seeing those ancient Tibetan frescoes, Buddha statues, etc. but also a chance to enjoy a great view of Lhasa city from the top of the mountain at the center of the holy city. 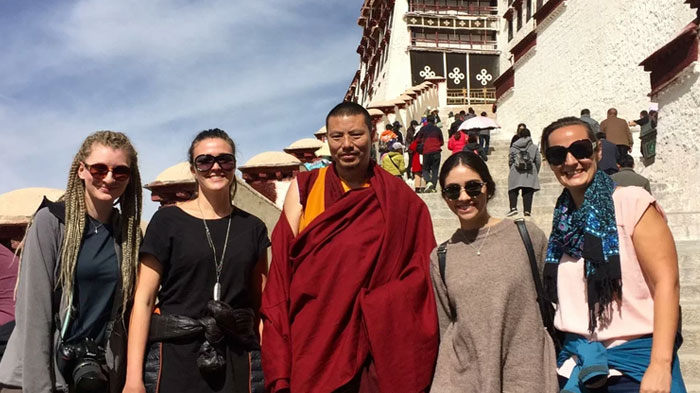 There are no elevators in the entire palace complex, so please wear light shoes to climb up over 400 steps. Moreover, it is suggested to slow down when you climb the Potala Palace to avoid altitude sickness from strenuous exercise.

Please notice that photography is not allowed inside the palace hall, and the number of visitors per day is limited to 3,000.

For many Tibetan pilgrims who live outside Lhasa, it is a lifelong pursuit to go to the Jokhang Temple to worship the 12-year-old gilded bronze statue of Shakyamuni, which was brought by Princess Wencheng as her dowry when she married with Tubo King Songtsen Gampo. 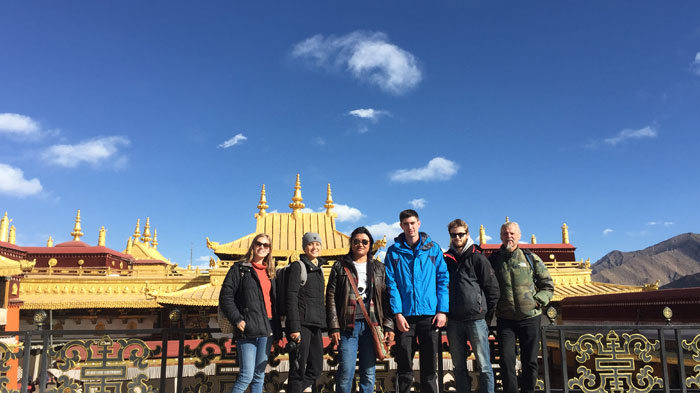 Our clients explored the holy Jokhang Temple in Lhasa.

When you visit the Jokhang Temple, don’t miss the chance to climb to the roof of the temple. Not only can you get a closer view of the gleaming rooftop sculptures and ornaments, but you can also have a better cause to overlook the devout pilgrims in the square in front of the temple. At the same time, you can also enjoy a great distant view of the Potala Palace.

When sunning in the plaza in front of Jokhang Temple, you will see many pilgrims prostrating in front of the Jokhang temple and might be moved by the view and the devoutness of these pilgrims.

Please notice that the Jokhang Temple is opened for pilgrims only in the morning. The opening hour for tourist is from 11:30 to 17:30.

3. Doing the Barkhor Kora with the local pilgrims

For tourists, Barkhor Street is a good place to taste Tibetan food and buy Tibetan souvenirs. However, for local Tibetans, it is also a sacred road. 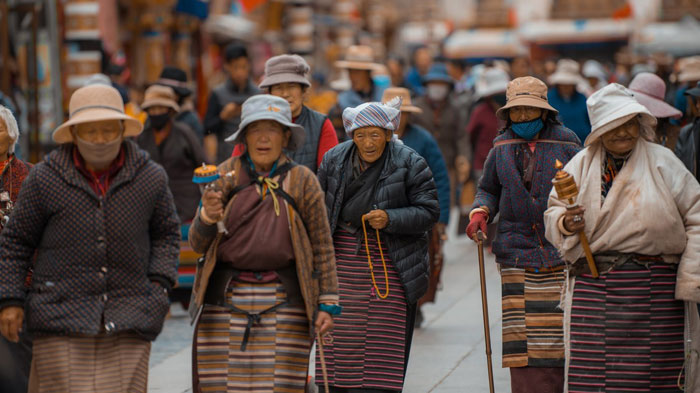 You can walk the Barkhor Kora with local pilgrims along Barkhor Street.

Barkhor Kora is one of the most sacred circuits for Tibetan pilgrims. The devout Tibetan pilgrims walk clockwise around the Jokhang Temple along the Barkor Street. Some of them also prostrate themselves with Buddhist mantras murmuring.

To see both modern tourists and traditional local pilgrims in this 1300-year-old street is a very special experience.

Don’t only shopping in Barkhor Street. Just follow a few parts of the Kora with the local pilgrims!

In Sera Monastery, one of the three best Monastery in Tibet, you can see the monks debating every afternoon.

The monk debate is a kind of discussion of Buddhist knowledge for monks to learn. Both sides of a debate employ various gestures to increase the intensity of the debate. They may be eager to urge their opponent to answer a question as quickly as possible or pull beads as a way to take the power of the Buddha to defeat their opponent. 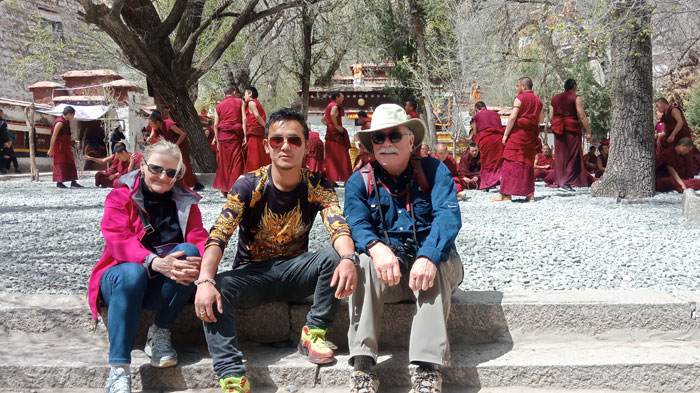 Watching monk debating in Sera Monastery is one of the highlights of your Lhasa tour.

From Monday to Saturday, there is the monk debate holding at the debate courtyard of Sera Monastery every afternoon.

When watching the monk debate in the Sera monastery, please keep quiet and don’t enter the debating area and interrupt their debate.

With permission, you can take photos of the monks in the debate, but this will cost extra.

Drepung Monastery is best known for the massive size of its temples and the very important Buddha display ceremony at the Shoton Festival.

In the annual Shoton Festival, the Buddha unfolding in Drepung Monastery is the start of the festival. In the early morning, a giant Thangka of Buddha will unfold on the hillside behind the monastery. Thousands of local pilgrims, as well as tourists from all over the world, would come to see it. 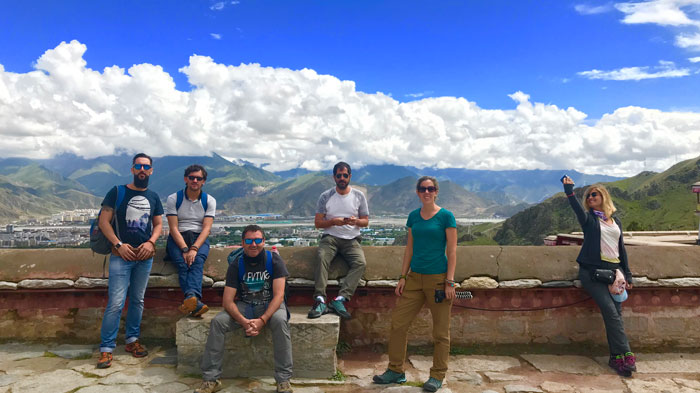 Capturing a panoramic view of Lhasa city from Drepung Monastery

Located on the Gambo Utse Mountain, Drepung Monastery is facing the Lhasa River and the valley. From here, you can overlook the entire Lhasa city and see the holy city from a different perspective.

6. Enjoy a leisure afternoon in a Tibetan Local Teahouse

Drinking butter tea is a regular part of Tibetan life. Before work, a Tibetan will typically down several bowlfuls of this beverage. 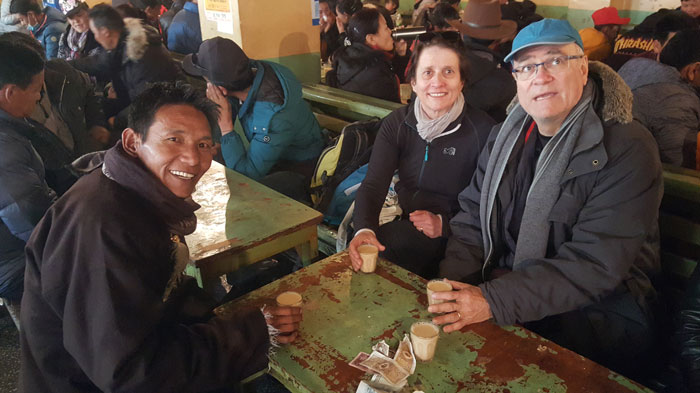 In a local Tibetan teahouse, you can share a bottle of butter tea with your travel fellows, and taste some other traditional snacks and food in Tibet, such as Tibetan noodles.

Surrounded by local Tibetans, you will enjoy the real life of the locals. Come to be a part of them.

The nightlife in Lhasa is more colorful than you expected.

If just watching the musical show isn’t enough to satisfy your nightlife cravings, there are also many Langma Halls (Tibetan night clubs) to enjoy a more Tibetan style nightlife as the locals do. There you can enjoy live shows by local bands, singers, and dancers, and drink authentic Tibetan beers. 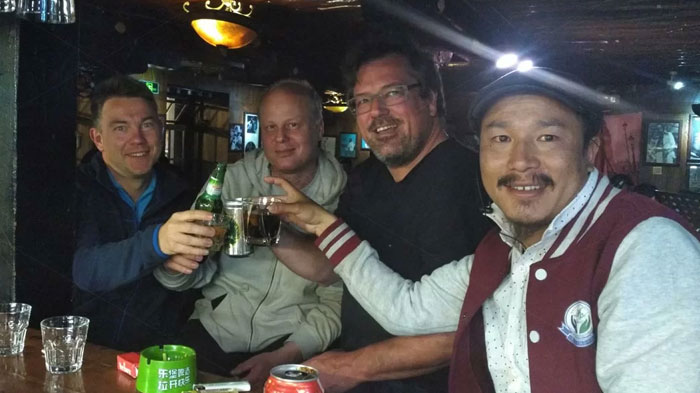 Moreover, there are cafés and bars open at night in Lhasa, where you can enjoy a more modern nightlife.

When you go out for nightlife in Lhasa, don’t forget to get to Potala Palace Square to appreciate the charming night view of Potala Palace.

Linka is a Tibetan way to call the picnic. It is a group activity for Tibetans with their family and friends to picnic in a local park.

Norbulingka, the summer palace of Dalai Lama, is one of the popular parks that local Tibetans usually go for Linka, especially during the Shoton Festival. 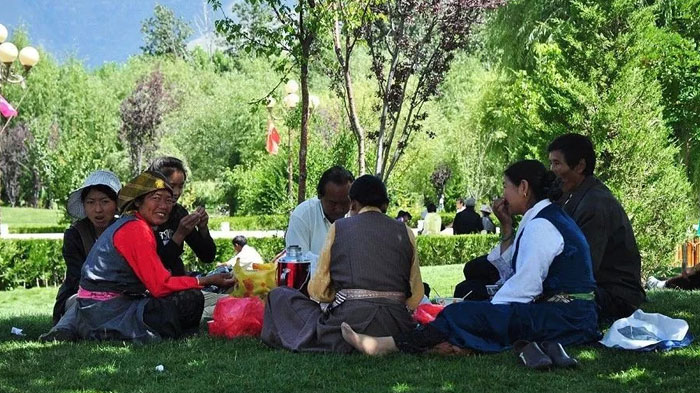 Never miss the opportunity to experience the Linka with locals

Having Linka with family and friends is an important part of the Shoton Festival. During the festival, local Tibetans will have Linka in Norbulingka, sharing snacks, yogurt with each other and enjoy the Tibetan opera performances. It is a good chance for you to experience local life to have Linka with the locals.

But don’t worry. If you visit Lhasa at another time, not during the festivals, you can also have a Linka with your group members and Travel guide in the park for it is a way of life in Tibet, not only for Festivals.

The most direct way to be like a Tibetan is to dress up their clothes.

The men's version of the Chupa is usually looser, and when the belt is fastened, the upper part will have a rolled-up part like a pocket to hold things. Generally, Tibetan men will wear a white or solid-colored shirt under the Chupa with pants and leather boots.

The women's version of the Chupa is cut more snugly and is available with or without sleeves. The women's clothes are more brightly colored. Also married Tibetan women wear traditional handmade aprons. The couple were dressing in Tibetan clothes in a clothes store of Lhasa.

In addition to traditional clothing, unique Tibetan accessories are also essential. Both men and women in Tibet love to wear a variety of accessories such as gold, silver, and gemstone beads.

At Lhasa, we offer a full Tibetan clothing service, from costume matching to professional photography, so you can tour Lhasa in traditional Tibetan clothes and leave your best pictures in Tibet.

Lhasa is the first stop for almost all visitors to Tibet. Perhaps you already know about the holy city Lhasa, like the majestic Potala Palace, the sacred Jokhang Temple, and more.

Here we present to you nine of the best things to do in Lhasa to start your Tibet tour. Our local travel experts no only mention the classic sightseeing tours to the famous sites, but also recommend the unique experiencing nightlife in Lhasa, visiting Lhasa in traditional Tibetan clothes, and some more hidden experiences. We hope this information has given you a more complete understanding of Tibet.