Perched on the soaring Qinghai-Tibet plateau, Tibet enjoys much praise and abuse for its mind-blowing alpine scenery and notorious plateau weather. In fact, the weather and climate of Tibet are largely shaped by its complex terrain and atmospheric circulation. Geographically, from its south to northwest, the climate zone of Tibet mainly consists of tropical montane humid monsoon climate, plateau temperate monsoon climate, and frigid plateau monsoon climate and subfrigid monsoon climate. 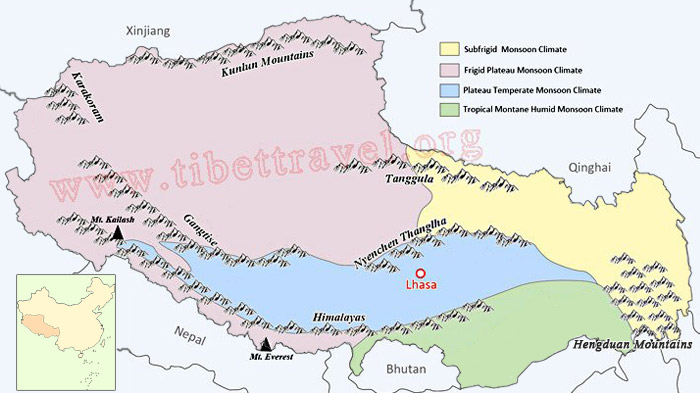 For the first-time traveler to Tibet, the following 4 features of Tibet weather and climate merit your attention.
a. Thin Air and Low Air Pressure
Due to the high altitude, many first-time travelers to Lhasa (3650m) will be both amazed at the high visibility of the plateau air and have some mild symptoms of altitude change, such as shortness of breath, and fast heartbeat, etc. However, there is no need to panic. A couple of days later, all these symptoms will disappear as your body acclimatizes to the high altitude. Meanwhile, you will also easily notice that the air is extremely clean with little moisture.

Travel Tips: it's highly recommended to bring a lip balm and drink more water on the plateau. Besides, most of travelers will suffer from different levels of high altitude sickness due to the thin air, read the details about how to ease the altitude sickness here.

b. Ample Sunshine with Strong Solar Radiation
Tibet is known as the region with the strongest solar radiation in China. Thanks to the extreme altitude, the amount of solar radiation it gets normally exceeds more than twice or one third of the areas with same latitude. In Lhasa alone, the annual daytime has as long as 3021 hours, making it unequivocally “the City of Sunshine”. 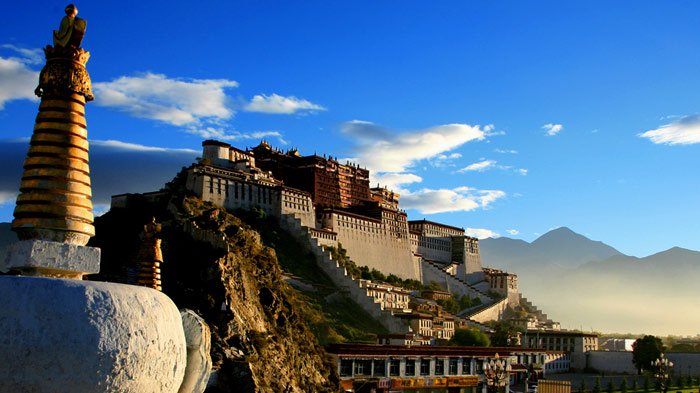 Travel Tips: for the strong radiation in Tibet, sunglasses, sunscreen and breathable sun hat are preferable to protect your eyes and skin from sunburn.

d. Clear-cut Distincion between Dry and Rainy Season with Much Rainfall at Night
Normally, rainy season starts from April and May in Zayü County and Mêdog County, Nyingchi (eastern Tibet) and gradually moves westwards to Lhasa and Shigatse, etc. In July, the entire Tibet is taken control by rainy season. Most of the precipitation in Tibet occurs from May to Sept, accounting for 90 percent of annual rainfall. While from Oct to April next year, the total amount of rail only makes up 10% or 20% of annual precipitation. An interesting phenomenon is that occurrence of rain at night is much higher than daytime with the exception in Himalayan region and southeastern of Tibet.

Temperature and Climate of Tibet in Detail 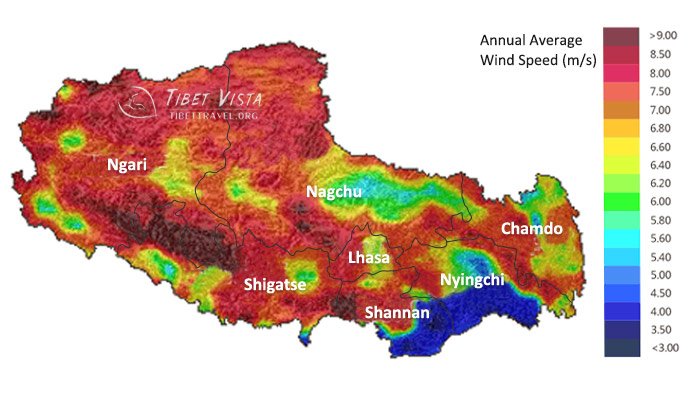 Windspeed of different regions of Tibet

Hours of Daylight in Tibet 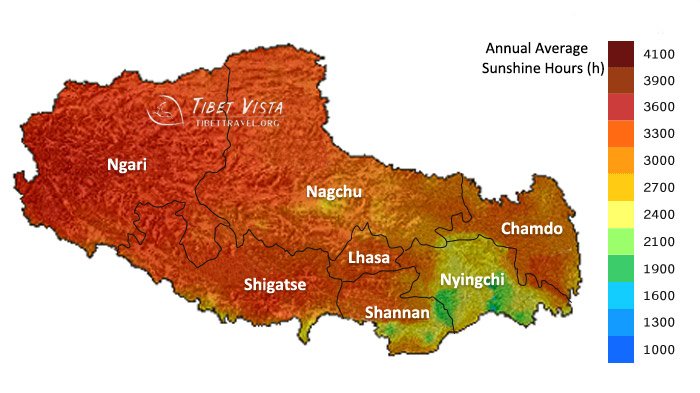 Hours of daylight in different regions of Tibet

Tibet Weather and Climate by Month

The following data gives you the rough idea of Tibet weather in 12 months. 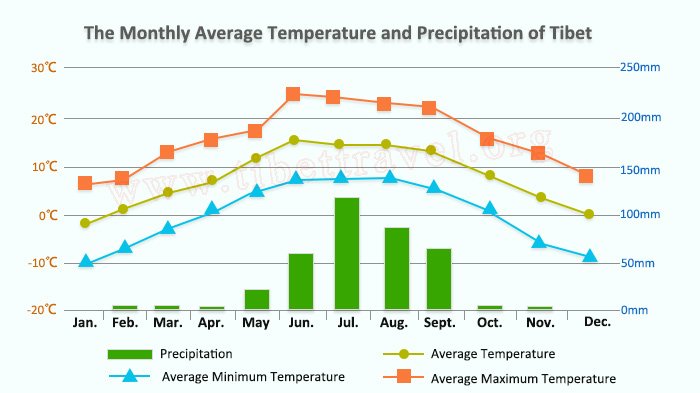 With 1,228,400 square km, Tibet is blessed with second-to-none Himalayan scenery and profound Tibetan Buddhism and exotic culture and customs. Though there are 7 prefectures, most of the highlighted attractions are centered in Lhasa, Shigatse and Shannan and Ngari and Nyingchi. Let’s find out the best time to travel to these places.

Lhasa Weather and Major Attractions:
Situated in fertile Lhasa Valley, Lhasa (3650m) is the spiritual heart of Tibet. Its favorable geographical location breeds pleasing weather and climate all year round. And Lhasa tour will be the focus for many first-time travelers to Tibet. 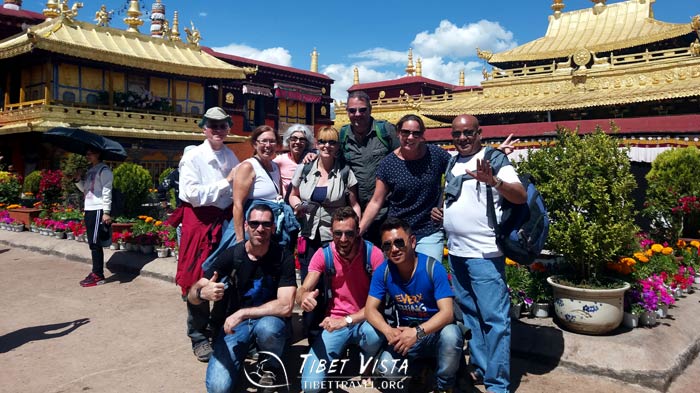 Shigatse Weather and Major Attractions:
Shigatse (3836m) is the second largest city in Tibet and also the best place to enjoy top 4 stunning mountains along Himalayan range, esp. the close observation of world’s summit Mount Everest (8844.43m) at Everest Base Camp(5200m). The best time to Everest Base Camp would be from Apr to May and from Sept to Nov. 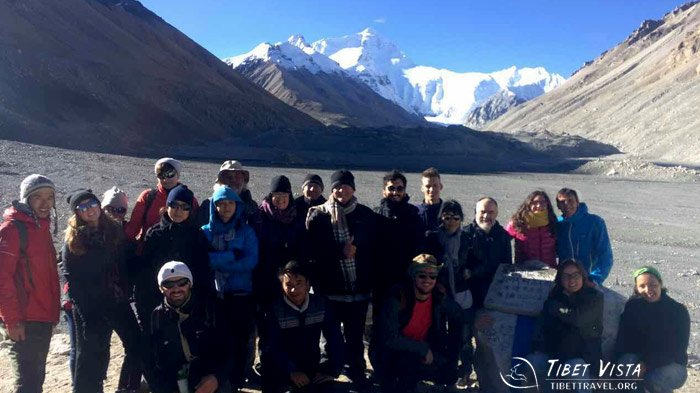 Enjoy the imposing view of Mt. Everest at Everest Base Camp

Shannan Weather and Major Attractions:
Situated to the south of Mt. Gandisi and Nyanchen Tanglha range, Shannan(3600m) is the closest prefecture to Lhasa (about 2 h drives). For tourists who take flight to Lhasa, Gonggar International Airport in Shannan is where you will touch down. Since the main tributary of Yarlung Tsangpo River flows through Shannan, the fertile land and pastoral terrain in Shannan make it the cradle of Tibet civilization. 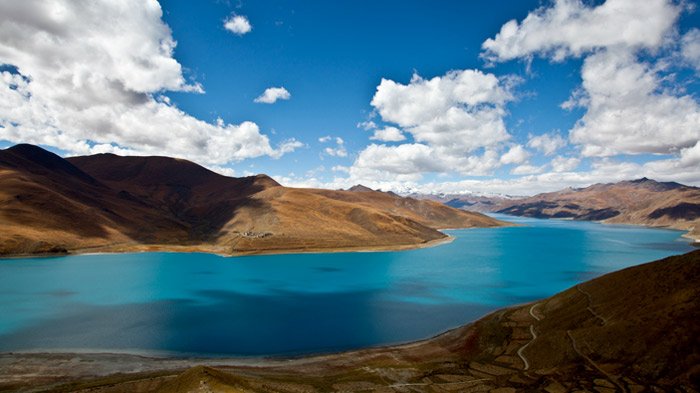 Ngari Weather and Major Attractions:
With an average altitude of above 4500m, Ngari is truly known as the “roof of the roof”. The highlight of Ngari tour would be its magnificent kora around holy Mount Kailash and sacred Manasarovar and exploration of lost ancient civilization “Guge Kingdom”. Ngari features plateau monsoon climate and gale is frequently seen from Nov to early May. The annual temperature on average is extremely low. The best travel season to Ngari would be from May to July and Sept. to Oct. 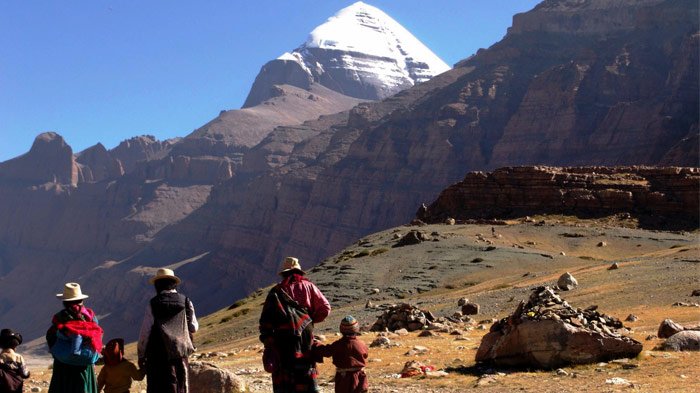 Nyingchi Weather and Major Attractions:
Located in the southeast of Tibet, Nyingchi is the region with the lowest altitude (around 3000m) and massive pristine forest in Tibet. Nyingchi is characterized by tropical and humid subtropical climate. The natural scenery of Nyingchi is often compared to that of Switzerland. Actually, Nyingchi is suitable for travel all year around, esp from mid-March to late April when the annual peach blossom festival is held. 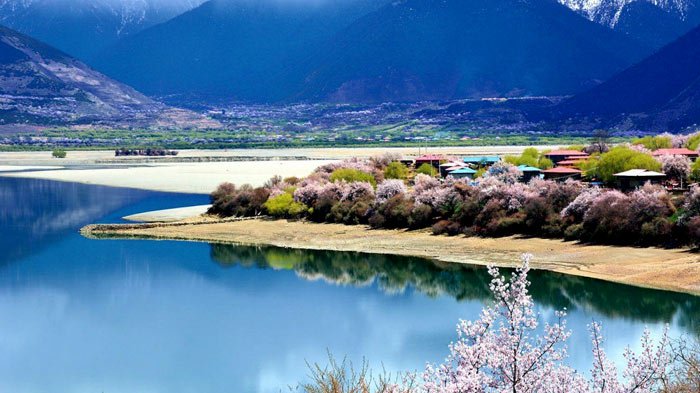