In the 9th century, the once-prosperous Tubo Kingdom gradually declined. The last Zamprogna Langdama (Tibet King) implemented the policy of eradicating Buddhism. As a result, contradictions between the monks group and the secular blue blood group among the rulers were intensified and wars broke out. Langdama died in a war in the year of 823. His sons and grandsons fought for the thrones. Jide Nimagun was defeated in the battles and escaped to the remote Nagri area. Later, he created a powerful kingdom-Guge Kingdom in Nagri area. In his late years, in order to avoid the tragedy of fight between brothers, he divided the Guge Kingdom into three parts and gave them respectively to his three sons. 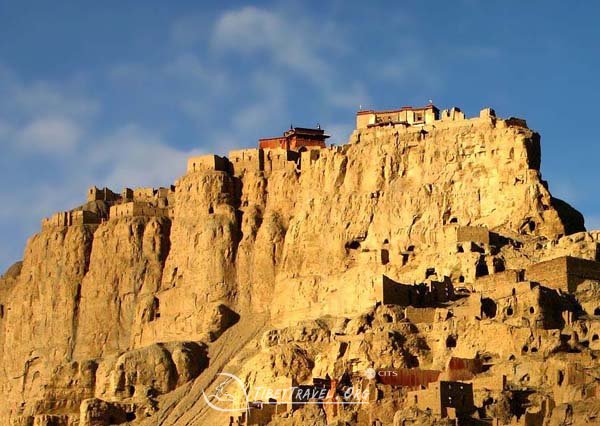 In the beginning, the Guge Kingdom ruled that Buddhism was the foundation principle to govern the whole kingdom. The governors were all quite enlightened. They built the Tuolin Monastery and translated the Buddhism scriptures to spread Buddhism.

However, in the later Guge Kingdom period, the monks group got stronger and stronger, becoming the threat to the royalty. So the last king of Guge Kingdom decided to believe in Catholicism and built some Catholic churches. The monks group then staged an uprising. What's worse, they seduced the enemies of Guge Kingdom-Ladake to attack Guge Kingdom. As a result, the kingdom was destroyed by internal disorder and invasion from the outside.

Nowadays, the ruins of Guge Kingdom become a great tourist attraction in western Tibet. The ruins cover an area of 200,000 square meters. The buildings follow the hill to its top in a rigid layout and an imposing manner. The 11-storeyed castle is more than 300 meters high. It is home to houses, caves, pagodas, blockhouses, defense works and tunnels. The previously stylish caves are now seriously damaged. Few works of architecture remain intact, but Guge's appearance is still imposing.