Best Time to Visit Tibet and Bhutan: expert tips to help you travel at the right time

Close neighbors in the Himalayas, Tibet, and Bhutan are two of the most spectacular places to visit in the world. Lying next to each other, on either side of the western Himalayas, these two devout Buddhist lands are ideal locations for a combined tour of the last vestiges of traditional Tibetan Buddhist lands. However, working out when to visit them together can be a little confusing, as they have very different climates and seasonal variations in weather conditions.

Bhutan is a typical four-season semi sub-tropical country, with defined wet and dry seasons within the year. In contrast, Tibet has a typical plateau climate across most of the region, with a more sub-tropical climate in the southeast of the plateau, on the lower edges of the Tibet Autonomous Region. This means that the seasons can vary somewhat for traveling to each location for certain activities, and matching the two destinations at the same time can be tricky. However, with our expertise in traveling and tours to both Bhutan and Tibet, we can help you to decide when is the best time to go for your twin-tour of Tibet and Bhutan.

Tibet and Bhutan, because of their different climates and seasons, have slightly different high and low seasons throughout the year. This can make for a complex calculation of when to travel. Fortunately, both locations also have what are known as “shoulder” seasons, seasons either side of the peak seasons when travel is still possible, though it may be either hotter or colder, depending on the time of year. As the most places for tourism, the high season is the most costly, with higher prices based on supply and demand in Tibet, while the low season is the cheapest. In between, the shoulder seasons can still be cheap, with relatively good weather. In Bhutan the high seasons are more expensive, costing US$250 per day for the Minimum Daily Package, while in the low seasons (summer and winter) the cost of the Minimum Daily package is only US$200 per day.

The high season in Tibet runs from April to Oct, and is the height of summer on the plateau. This is actually in stark contrast to Bhutan, whose high seasons are actually split into two, running from March to May and September to November. The summer in Bhutan is the wet season, when the monsoon rains can make the country very damp and waterlogged. 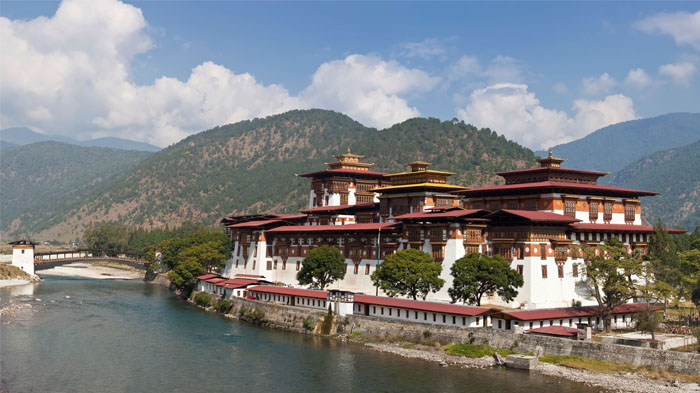 Spring and Autumn are the best seasons to visit Bhutan.

For Bhutan, this is not a good time to visit. Their peak seasons are spring and autumn, when the weather is at its optimal for Bhutan touring, trekking, and general sightseeing, with clear skies and sunny days. However, days not as hot as the summer months, with temperatures in Bhutan ranging from 13 to 19 degrees. While Tibet’s high season is in the monsoon season, the high plateau and the “shadow effect” of the Himalayas means that there is still little in the way of rain in most of Tibet throughout the summer months. What little does fall, usually happens in the early evenings and overnight, leaving the days free and sunny for touring.

Tibet’s low season is generally in the winter, from December to March, though it is still possible to travel to the region in the winter months. The plateau gets a lot colder in the winter, and temperatures can drop to as low as -28 degrees at night and rarely getting above freezing during the daytime. - Find out what to expect for winter tour in Tibet. 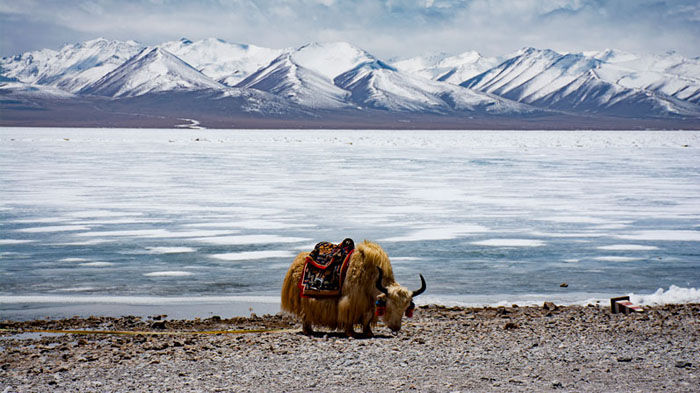 For Bhutan, the low season is really only in the summer months, from June to August, when the monsoon rains cause many of the outlying roads to be flooded or damaged, and the rains in the central and southern regions of the kingdom can make a vacation uncomfortable. Bhutan receives more rainfall in those three months than any other region of the Himalayas, though not every day is wet and raining, and travel is still possible to the major tourist sites in the larger cities.

Tibet has two shoulder seasons, in the spring and autumn, which are actually renowned for being the best times to visit Tibetan plateau for trekking and tours. Spring, from April to May, and autumn, from October to November, both have clear skies and almost no rain, which makes them ideal for getting out into the more remote areas of the high-altitude plateau.

It could be argued that winter in Bhutan is the “shoulder” season, as it lies in between the two main tourist seasons in the kingdom, and while it may get cold in the mountains, the climate is dry and relatively warm as you head further south from the Himalayas. Winter is an ideal time to go sightseeing around the southern areas of Bhutan, or trekking in the lowland regions, where the snows rarely ever fall. Running from December to the end of February, the shoulder season in Bhutan is the best time to travel around the western Dzongkhags of Haa, Thimphu, Paro, Wangdue Phodrang, and Punakha. - Learn more of the best time to visit Bhutan.

Best Time to Visit Tibet and Bhutan for Buddhist Festivals

Buddhist festivals in Tibet are one of the best ways to experience the stunning Buddhist culture of the plateau, and learn more about the devout Tibetan Buddhists themselves. Buddhism is a major part of the daily lives of most Tibetans, and the festivals are important events in the annual calendar. For Tibet, most of the festivals fall in the summer months, from late May to the end of September, with the main focus in July and August, when you can experience the Choekhor Duchen, the Gyantse Horse Racing Festival, the famous Shoton Festival, and even the Ongkor Festival of the farmers. 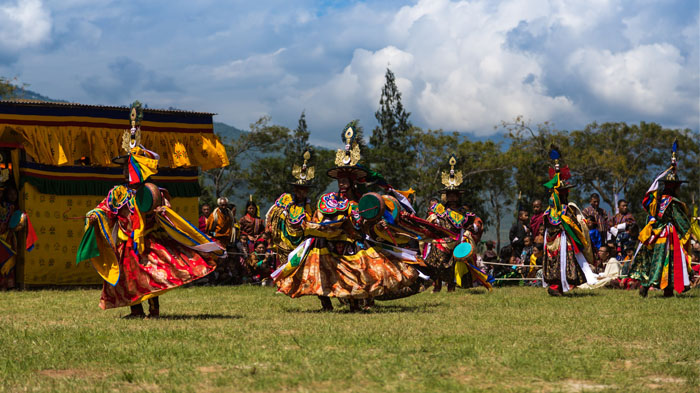 The famous Paro Tsechu held in April in Bhutan.

In Bhutan, festivals are known as Tsechu, and there are more than 40 religious festivals in the year. The bulk of the festivals happen in the peak seasons in Bhutan, in the spring and autumn, with the majority of festivals falling in March and October/November. - Click for more Bhutan holidays and festivals.

Best Time to Visit Tibet and Bhutan for Viewing Himalayas

If you are looking for the best view of the stunning Himalayan mountains, then there are times when the views are better than others. Both Tibet and Bhutan suffer the monsoon season in the summer months, and while you can visit Tibet in the summer, there is no guarantee that the mountains will not be covered in clouds. 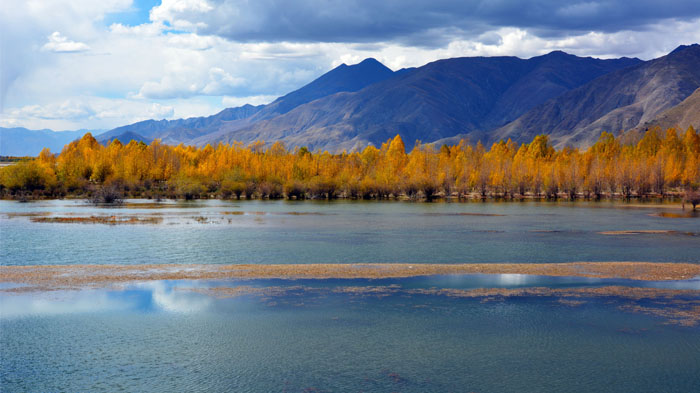 You can visit the picturesque Lhasa Valley in Autumn.

Similarly, in Bhutan, the summer months can be cloudy and humid around the mountains, making views obscured. The best time for mountain watching is always in the spring and autumn in both Tibet and Bhutan, as the weather is clear and bright, with almost no rain or clouds to obscure the high peaks.

Best Time to Visit Tibet and Bhutan for Cycling

Cycling around the Tibetan plateau has become a popular activity, with hundreds of tourists taking to the roads on bicycles, to cross the vast Tibetan plateau. The same can be said of Bhutan, and while it is not as huge as Tibet, cycling around this quaint Himalayan kingdom is a rich experience filled with wondrous sights. - Chick the best time to have a Tibet cycling tour. 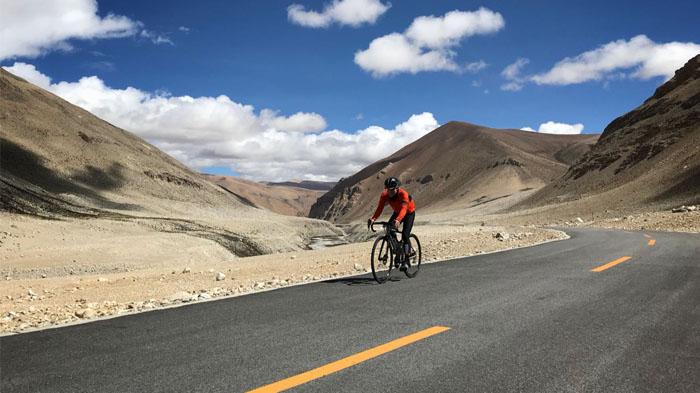 One of our clients are cycling from Lhasa to Kathmandu.

With the climates of Tibet and Bhutan being similar enough, it comes as no surprise that spring and autumn are the best times to cycle through these Himalayan domains. With clear skies, little rain, and cooler temperatures, it is the perfect time to get out an about on a bike and explore the mighty Himalayas and the vast plateau close up.

Best Time to Visit Tibet and Bhutan for Bird Watching

Bird watching in Tibet is a great way to experience the natural environment of the plateau, and there are various times to go bird watching, depending on the birds that you are looking for. With hundreds of types of birds to watch out for, the best time to travel for birds is from March to October. Different birds can be found on the plateau at different times of year, and there are even migratory birds that come to Lhasa in the winter months to get away from the cold of northern Tibet and Mongolia. 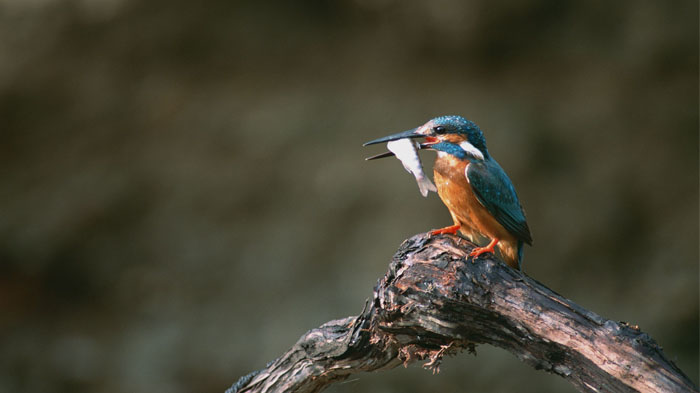 Each year, bird-watchers flock to south Bhutan for the best shot.

In Bhutan, there are around 770 species of birds to look out for, and for the best times to travel, Bhutan is best visited from February to May and September to November. However, the black-necked cranes often head to Bhutan, around the Gangtey Valley area, for the winter, so it is still worth traveling in December and January to get the best options for seeing them in their winter feeding grounds.

Best Time to Visit Tibet and Bhutan for Trekking

There is no doubt that Bhutan and Tibet both share some of the best trekking in the Himalayas, outside Nepal. And these two neighbors also share the same peak seasons for trekking. Spring and autumn, from March to May and October to November are always the best times to come for the best Himalayan hiking experience in both Tibet and Bhutan. - Check some of the treks in Tibet and the most classic treks in Bhutan.

Best Time to Visit Tibet and Bhutan for Budget Travelers

As with most budget tours, the low season is the best time for those that want to save money on their tours. In Tibet, this is the winter season, when there are fewer tourists on the plateau and when prices are much lower, to attract people to come in the winter months. The cheapest months in Tibet run from December to February. In Bhutan, the winter is the “shoulder” season, and the low season is in the summer months, from June to August, when the monsoon rains hit the kingdom. While it is the monsoon, it does not rain all the time, and there are still plenty of things to do and see through the summer.

While there are a few periods when Tibet and Bhutan do not coincide for certain activities, such as budget holidays, for most of the year, the same activities are available at around the same time in both locations. This makes Bhutan and Tibet one of the most perfect pairings for a tour of two distinct areas of the Himalayas, with both similar and very different things to see and do in each destination.

0 Comment ON "Best Time to Visit Tibet and Bhutan: expert tips to help you travel at the right time "