Travel to Tibet from Thailand

For Thai tourists, a journey to Tibet, one of the ancient homes of Buddhism in Asia, is the journey of a lifetime, and one that many Thai Buddhists want to take. Getting to Tibet from Thailand can be done through mainland China or through Nepal, and there are direct flights to both destinations from Bangkok’s Suvarnabhumi International Airport.

As with all other nations in the world, Thai tourists must have a Tibet Travel Permit in order to get into and around Tibet. In fact, it is impossible to even board the flights or trains to Lhasa without one. A Tibetan tour operator for more than a decade, we can apply for the permit on your behalf once you have booked a tour with us. We can also provide you with the required guide, driver, and private vehicle for your tour of Tibet, as independent travel in the region is not permitted. Applications require your passport and visa photocopies and a digital photo, and can take from 15-20 days to process.

Most Popular Tibet Tour from Thailand

From Thailand, a tour that includes Nepal, Tibet, and mainland China is the perfect round-trip to take to explore as much of the region of Asia as possible in one trip. You can start in either Nepal or China, and visit all the places you want to in each country, before moving on to the next. Starting in Kathmandu is a preferable option, as you can get the Nepali visa easily on arrival at the airport, and the Group Tourist Visa and Tibet Permit are easily arranged by us, and can be used for the onward trip into China as well. The triumvirate packages we have can make your tour of Tibet even better by adding these additional destinations.

How to Get to Tibet from Thailand? Multiple ways to travel from Bangkok to Tibet.

Tibet lies to the northwest of Thailand, over 2,000 kilometers distant as the crow flies. Flights do not run direct to Tibet from Thailand, so tourists must travel through either mainland China, via Beijing, Shanghai, Chengdu, or Guangzhou, or through Nepal via Kathmandu’s Tribhuvan International Airport. 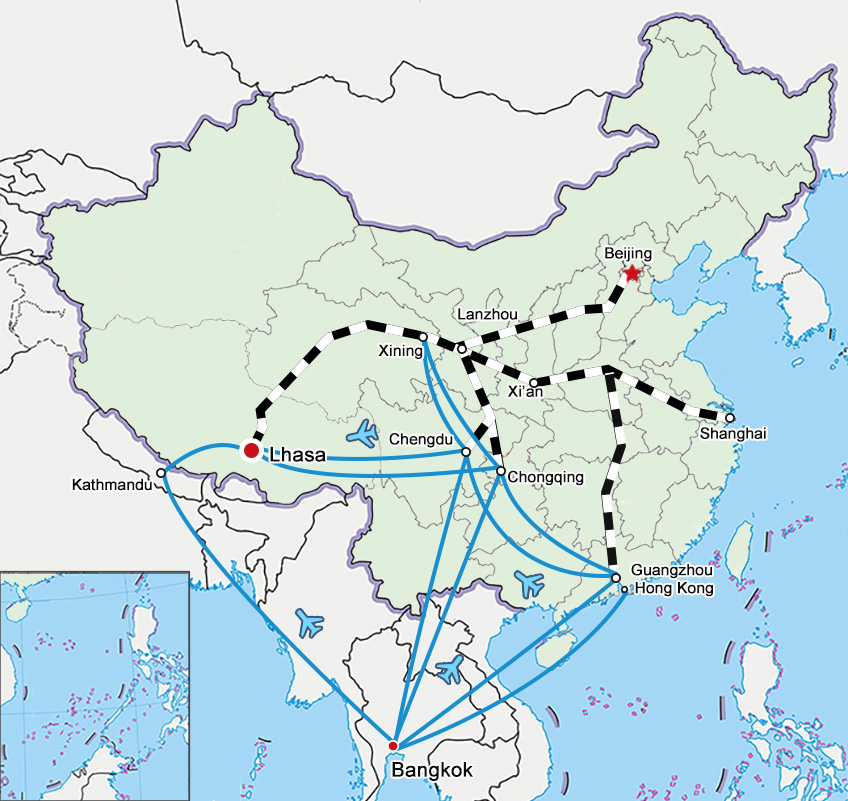 With direct flights to more than 20 destinations across China, it is simple to get a flight to the city you want to start your journey to Tibet from, including Beijing, Shanghai, and Guangzhou. You can also fly direct to Hong Kong, and stop there for a day or two, before moving on into mainland China to head for Tibet. The average flight times are:

Once in mainland China, you will find your Tibet Travel Permit waiting for you at your hotel, and you will be ready to board the flight or train to Lhasa. You have the option to spend a few days in the place of your choice in China, and local Chinese tours can also be arranged for you while you are there. Once you are ready, you can take your flight or train to Tibet, to start your tour on the Roof of the World.

While there are dozens of flights to Kathmandu from Bangkok, there is only one that flies direct, which is provided by Thai Airways. The flight to Kathmandu takes around 3 hours 25 minutes direct, and costs just US$ 328 for an economy ticket. Indirect flights, while much longer (from 7 to 20 hours flight and layover time), can also be much cheaper, and can cost from as little as US$ 200.

For those who are traveling through Nepal, there is no greater adventure than an overland tour from Kathmandu to Lhasa by car. This epic adventure is one that can take from 7 days to as long as two weeks, and where you go depends on you. We can arrange your itinerary to suit your needs, and you can visit the holy mountain of Mount Kailash, take photos of the world’s tallest mountain at Everest Base Camp, and visit ancient monasteries that have stood on this high plateau for over two millennia.

Starting with an amazing drive up into the Himalayas, and across the Trishuli River Gorge to get in to Tibet, the journey is one that takes you to the extremes of Tibetan Culture and religion, passing through rural prairie land with its nomadic yak herders, and stunning river valleys that will leave you breathless. And your tour will culminate in the best sight of all, the stunning city of Lhasa, religious and cultural heart of the Tibetan people, and home to the world-renowned Potala Palace, the former home of the Dalai Lama and seat of ancient Tibetan governance.

If you are planning to enjoy a trip to Tibet from Thailand, yet have no ideas of how to sort it out the details, no worries! We would like to hear your tour plan and offer free professional consultancy and viable solutions. Please feel free to contact us.