Travel to Tibet from South Korea

Traveling to Tibet from South Koreans is not a long journey, and there are direct flights from Seoul to more than 30 cities across China, including Beijing, Shanghai, Guangzhou, and Chengdu, to name a few. Flying to Kathmandu to enter Tibet is also an option. However, it requires stops, as there are no direct flights.

The Tibet Travel Permit for South Korean tourists is required before traveling to Tibet, and travelers should book their tour through as registered tour operator as independent travel in the region is not permitted. All tourists must be on a pre-booked tour that will include their guide, driver, private vehicle, and the relevant permits. And to facilitate your Tibet tour, we offer Tibet Permit service for free to our clients. The application requires your passport and visa photocopy and a digital photo to process, and takes around 15-20 days. Once completed and approved, it will be forwarded to your hotel in China. And you need it to board the Tibet train or flight to Lhasa, Tibet.

Join-In Group Tours are a great way to take a trip to Tibet for solo travelers and those on a budget, or someone who enjoys traveling with other interesting travelers. The tours range from four to fifteen days, and the itineraries depend on the tour you want to take, with fixed departure. The tours leave on set dates, and can have up to around 12 people in each group. A great way to save money, since certain costs are shared between all member of the group, the Join-In Group Tours from Tibet Vista are a popular way to travel to the roof of the world, and give you a better service from your guide due to the lowered numbers in the party.

A great way to explore the whole of China, across Tibet and on into Nepal, is one of the tour packages that cover all three places in one go. Ideal for those who want to cover more than one place during their trip, you can travel across mainland China, visiting the places you want to see most, before heading up to the Tibetan plateau for a tour across Tibet. You will end the tour in Nepal, where you can relax in the tranquil Kathmandu Valley, or take up trekking at one of the hundreds of amazing trails across the country. The package covers a distance of over 5,000 kilometers across the whole of China and on down from the Himalayas into Nepal. And we promise to offer you the most tourist-friendly service you need, such as Tibet permit application, and Tibet train, flight, hotel booking, etc., leaving you solely focus on the tour experience itself.

How to Get to Tibet from South Korea? Multiple ways to travel from Seoul to Tibet.

Travel to Tibet from South Korea can be done using one of two main routes, through China or through Nepal, and there are multiple options for onward travel from both places to get you to Tibet. Chinese cities such as Shanghai, Beijing, Chengdu, and Guangzhou offer both flights and trains to Lhasa, and you can get a flight from Kathmandu in Nepal, or cross the border overland to get to Lhasa. 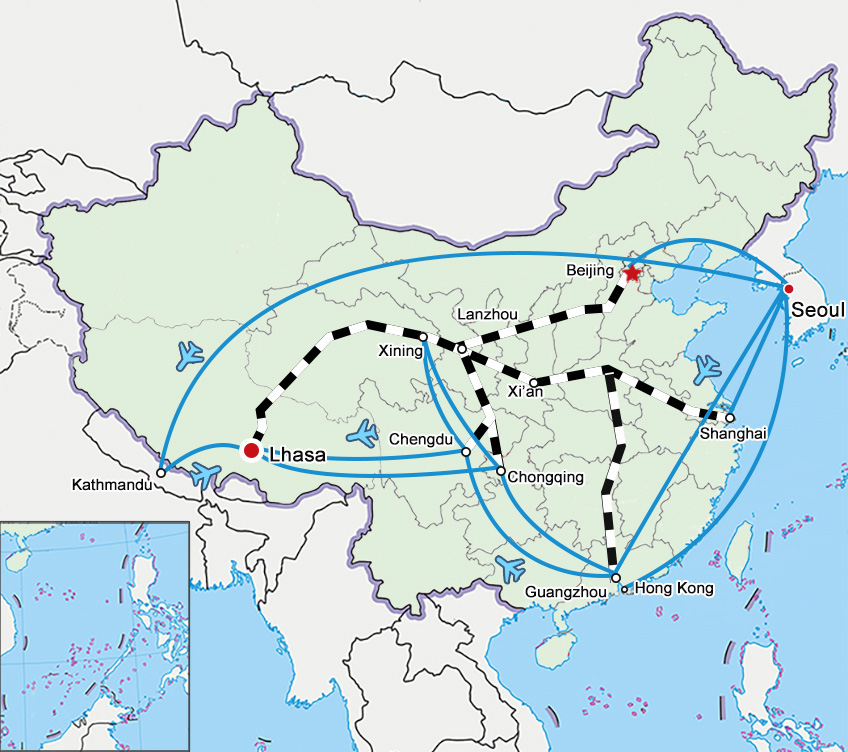 With dozens of daily flights to the major cities in China, getting a flight from Seoul Incheon International Airport is simple, and the prices are relatively low as well, costing from just US$ 200. The average flight times are:

When you arrive in China at your preferred location, your Tibet Travel Permit will be waiting in the hotel reception for you. In some extreme cases, our staff will give it to you in person the railway station or the airport. You will need the permit to get the boarding pass for your flight or to board the train to Lhasa.

By train
The train from Beijing to Lhasa is the Z21, which leaves daily at around 8:00pm. The journey covers 3,757 kilometers across eight provinces in mainland China as well as Tibet, arriving in Lhasa around 40 hours later at 12:10 pm on the third day. However, in the summer season, from May to September, it can be hard to get a ticket for the train from Beijing to Lhasa, due to the huge demand. One option to counter this would be to take a flight to Xining, in Qinghai Province, and then get the train from there, as there are more carriages on the Xining train and a better chance of being able to procure a ticket.

By train
Departing at 11:45 am daily, the train from Guangzhou takes over 53 hours to get to Tibet, making it the longest of all the train journeys to Lhasa. So, it’s not recommended to family with small kids or the elderly. Covering almost 5,000 kilometers, the train arrives in the Tibetan capital at around 5:05 pm on the third day.

By flight
From Chengdu, there are numerous direct flights to Lhasa, which takes around 2 hours 15 minutes on average. With more than 15 flights a day from Chengdu, it is one of the best airports from which to fly to Tibet, and with the short travel time, it is one of the best options for those with time constraints. It is also relatively inexpensive, costing from around US$ 233 for an economy flight.

By train
The trains from Chengdu depart every other day at around 9:37 pm, and arrive in Lhasa on the third day at around 9:55 am. Covering a distance of 3,070 kilometers across mainland China and Tibet, the journey takes a little over 36 hours, and is one of the more popular gateway cities to travel to Tibet from. Scheduled departures from Chengdu are on odd days of the month (1st, 3rd, 5th, etc) in January, April, May, August, November, and December, and even days of the month for the rest of the year.

While inland China is probably the best option for traveling to Tibet, as it is much closer than Nepal to South Korea, there is an option of traveling to Kathmandu and then either flying to Lhasa or taking an overland tour across the plateau. Flights to Kathmandu take from around 9 hours, as there is no direct flight to Kathmandu’s Tribhuvan International Airport, and the flights all make stops in either Hong Kong, Shanghai, or Guangzhou. The cheapest flights, however, are still as much as US$ 216 per person for an economy ticket.

Having gone to all the trouble of flying all the way to Kathmandu, it makes the flight worth the time and cost if you take an overland tour from Nepal to Lhasa. This journey is an epic adventure that takes you to high mountain passes, vast expansive prairies, shimmering high-altitude lakes, and some of Buddhism’s most revered monasteries and temples. You will get the chance to stand close to Mount Everest, and gaze upon its mighty flanks, all the way to the highest peak on the planet, or travel a little further north to one of the most sacred places in the world for Buddhists and Hindus, holy Mount Kailash. Traveling across the region is another adventure, as you will pass by many amazing sights, experience views that are unseen anywhere else in the world, and finally get to experience the cultural and religious heart of Tibet, the stunning city of Lhasa.

If you are planning to enjoy a trip to Tibet from South Korea, yet have no ideas of how to sort it out the details, no worries! We would like to hear your tour plan and offer free professional consultancy and viable solutions. Please feel free to contact us.