17-day China and Tibet tour covers large part of mainland China. Tourists can experience the prosperity of modern China in Shanghai. While in Guilin, the picturesque landscape makes you wonder if you are travelling in canvas of Chinese oil painting. As you enter Tibet from Chengdu, you will be entering a holy land, deeply influenced by Tibetan Buddhism. From Tibet, you will tour the famous ancient capitals in Xi’an and Beijing.

Shanghai to Guilin: Nanjing Road and take flight to Guilin

Fly from Guilin to Chendu and Visit Wide and Narrow Alley

Board the Train to Lhasa and Enjoy the Train Ride

Enjoy beautiful scenery of Qinghai-Tibet Railway and arrive in Lhasa

Fly from Xi’an to Beijing and visit Tiananmen Square 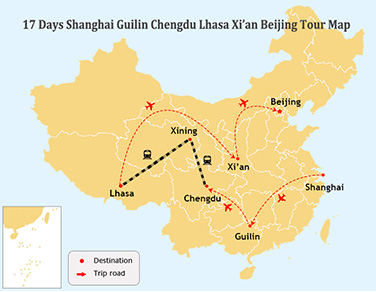 In the morning, we would head to the renowned pedestrian precinct Nanjing Road to take a nice stroll. From small boutiques selling handicrafts and other souvenirs to high-end fashion shops, you can shop to your heart’s content. Meanwhile, you can enjoy the local snacks and a great number of distinctive architecture.

Later, you will be transferred to Shanghai Pudong Internatonal airport to fly to Guilin. After your arrival in Guilin, the guide will greet you and help you get to the hotel. The rest of your day is for rest or explore the city on your own.

In the morning, you will visit the Elephant Trunk Hill, which is believed to be one of the landmarks of Guilin. The famous rock formation requires a bit of imagination to see it as an elephant rather than a natural arch. One suggestion is to enjoy it from the raft.

Then, in the afternoon, we are about to visit another must-see attraction in Guilin, i.e. the Reed Flute Cave. With more than 180 million years, Reed Flute Cave features natural limestone caves with dazzling artificial lighting of multiple colors.

Undoubtedly, the highlight of today’s tour would be the Li River Cruise, which flows 83km from Guilin to Yangshuo. The marvelous karst mountains, enchanting scenery such as vertical mountains, lovely bamboo rafts, and water buffaloes, etc. are perfect subjects for landscape photography. We would stop around the mountains that make up the scenery of 20 RMB note.

In the afternoon, the guide will take you to visit the bustling commercial street, i.e. West Street. Touristy as it seems, West Street is well-arranged and tidy, making for a pleasurable stroll. Besides, the unique Yangshuo backdrop in the distance makes it an enjoyable promenade.

Day 6: Fly from Guilin to Chendu and Visit Wide and Narrow Alley

Take the morning flight from Guilin to Chengdu. Upon your arrival in Chengdu, you will be escorted to the hotels. In the afternoon, tourists will tour Wide and Narrow Alley in downtown Chengdu. The lively and vibrant alley showcases the old life style and houses of Chengdu. You can enjoy the tea and tasty local snacks and buy interesting souvenirs as you tour this pedestrianized area.

Day 8: Board the Train to Lhasa and Enjoy the Train Ride

In the morning, you may do some shopping around the hotels. After lunch, we are about to head to Chengdu Railway Station and you will spend the rest of the day on the train to Lhasa. It is quite a long journey of taking a train from Chengdu to Lhasa. It will take 43:07 hours, two days and two nights in the Train. On the first day you will pass through two important provincial capital cities in northwest China, Lanzhou and Xining. Xining is known as the beginning of Qinghai-Tibet Railway. Travelling along the rail line, you could see the scenery of countryside and cities in northwest China.

Today, you will enjoy the most beautiful scenery of Qinghai-Tibet Railway, spectacular land of snows, boundless desert, vast grassland, and grand snow-capped mountains, beautiful lakes that will continually appear and strongly attract your heart. You will arrive in Lhasa at about 09:55. Your tour guide will hold a welcome sign with your name on it to greet you at the exit of the train station and escort you from the train station to your reserved hotel in Lhasa. The rest of the day is for you to get acclimatized to the altitude of Lhasa.

Afterwards, we will head to tour another must-see attraction in Xi’an Big Wild Goose Pagoda. Originally built in 652 during the Tang dynasty, the Pagoda is known for keeping the Buddhist scriptures and figurines of the Buddha brought by Xuanzang, one of the most renowned Chinese monks. The whole place is one of the most visited destinations by international tourists in Xi’an.

Day 14: Fly from Xi’an to Beijing and visit Tiananmen Square

Take the morning flight (around 2 hours) from Xi’an to Beijing first. Later the guide will get you transferred to hotels. In the afternoon, we will visit his Tiananmen Square. The tremendous and impressive square is skirted by Chairman Mao's Mausoleum, Great Hall of the People and National Museum of China.

In the morning, tourists are supposed to visit Visit the majestic Great Wall (Badaling section). You will be taken on a group tour to the Great Wall, the most famous symbol of China and one of the world’s most remarkable architectural wonders. This section was first built during the Ming Dynasty (1368-1644 AD).

After lunch, we will tour magnificent Forbidden City. It is the most complete imperial palace in China and used to serve as home of emperors of different dynasties. It’s a live encyclopedia of Chinese history, art, architecture, culture, etc.

In the morning, tourists will visit Ming Tombs, the burial site of the emperor Wangli, the 13th emperor of the Ming Dynasty who ruled for 48 years until his death in 1620.

The guide will transfer you to the airport or train station and help you get on board. The tour ends.

If you have enough holidays, and are keen to explore the vast landscape, ancient and modern civilization of China, this 17-day is highly recommended to you. You can tour the most enchanting landscape in Guilin and enjoy the stunning alpine scenery and secular and religious life in Lhasa. Besides, the tour of metropolitan city Shanghai and two ancients capitals in Xi’an and Beijing will give you full understanding of profound Chinese culture.