14 Days Shanghai to Chengdu Tour and Lhasa to Beijing Tour

14-day China and Tibet tour extends from highly modernized Shanghai and moves westward to livable Chengdu. Later, tourists can enjoy the world’s highest Qinghai-Tibet Railway to Tibet and explore the mysterious Tibetan Buddhism in Lhasa. Afterwards, tourists will move back to Xi’an and Beijing to experience the glory of ancient Chinese civilization.

Visit Chengdu Panda Breeding and Board overnight train to Lhasa

Enjoy beautiful scenery of Qinghai-Tibet Railway and arrive in Lhasa

Fly from Xi’an to Beijing and visit Tiananmen Square 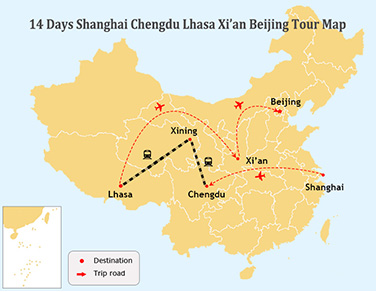 In the morning, we are expected to visit picturesque Zhujiajiao Ancient Town, also known as the "Venice of China". It’s about 1 hour drive from downtown Shanghai. The ancient town dates back to Ming Dynasty. It’s highly recommended to enjoy the boat ride from one end of the water way to the other. Ke Zhi Garden and multiple shops and bridges, and street vendors selling handicrafts and goldfish and turtles provide a respite from boisterous metropolitan city.

After a good rest at hotel in the afternoon, you will be transferred to Shanghai Pudon International airport and take flight to Chengdu. After you arrived in Chengdu, the guide will be meeting you and take you the hotel.

In the morning, drive for about half an hour to Chengdu Panda Breeding and Research Center, the home to giant pandas, where you will catch pandas' feeding time. They are at their most active, both Adults and Babies. There's a wealth of information and a panda museum in this 230-hectare park 10 km (6 miles) north of Chengdu. It takes about 2.5 hours to visit this site.

Then, the whole afternoon can be free for you to explore around.

In the evening, you will be transferred to Chengdu train station for the overnight train to Lhasa. The train departs from Chengdu North Railway Station. It takes about 1 hour to check in as the train takes about 1000 passengers. Please be sure to arrive in train station 1 hour or a half before the train departure. Train Z322 from Chengdu to Lhasa departs at 21:37, and your Tibet Permit will need to be checked when you check in.

Today, you will enjoy the most beautiful scenery of Qinghai-Tibet Railway, spectacular land of snows, boundless desert, vast grassland, and grand snow-capped mountains, beautiful lakes that will continually appear and strongly attract your heart.

You will arrive in Lhasa at about 09:55. Your tour guide will hold a welcome sign with your name on it to greet you at the exit of the train station and escort you from the train station to your reserved hotel in Lhasa. The rest of the day is for you to get acclimatized to the altitude of Lhasa.

Day 9: Fly from Lhasa to Xi’an

Afterwards, we will head to tour another must-see attraction in Xi’an Big Wild Goose Pagoda.

Originally built in 652 during the Tang dynasty, the Pagoda is known for keeping the Buddhist scriptures and figurines of the Buddha brought by Xuanzang, one of the most renowned Chinese monks. The whole place is one of the most visited destinations by international tourists in Xi’an.

Day 11: Fly from Xi’an to Beijing and visit Tiananmen Square

Take the morning flight (around 2 hours) from Xi’an to Beijing first. Later the guide will get you transferred to hotels. In the afternoon, we will visit his Tiananmen Square. The tremendous and impressive square is skirted by Chairman Mao's Mausoleum, Great Hall of the People and National Museum of China.

In the morning, tourists are supposed to visit Visit the majestic Great Wall (Badaling section). You will be taken on a group tour to the Great Wall, the most famous symbol of China and one of the world’s most remarkable architectural wonders. This section was first built during the Ming Dynasty (1368-1644 AD).

After lunch, we will tour magnificent Forbidden City. It is the most complete imperial palace in China and used to serve as home of emperors of different dynasties. It’s a live encyclopedia of Chinese history, art, architecture, culture, etc.

In the morning, tourists will visit Ming Tombs, the burial site of the emperor Wangli, the 13th emperor of the Ming Dynasty who ruled for 48 years until his death in 1620.

The guide will transfer you to the airport or train station and help you get on board. The tour ends.

Given the high altitude of Tibet, this well-made itinerary takes tourists to Lhasa by Qinghai-Tibet Railway, which helps a lot to avoid acute altitude sickness. The tour covers eastern, central west and western and northern part of China, displaying the glamorous culture of modern and ancient Chinese civilization.