The tour offers you an in-depth discovery journey to the most attractive destinations in China and Tibet. Not only will you take in the essence part of Shanghai, Chengdu, Lhasa, Xi’an and Beijing, but also you will enjoy a spectacular Yangtze River cruise along the longest river of Asia, with excellent shore excursions and breathtaking shoreside views. The tour starts in Shanghai and will take you westwards to Chengdu and Lhasa, before turning back to Xi’an and Beijing. You will also get the chance to enjoy the legendary Tibet train experience and high speed train ride as you transfer among these cities.

Fly to Yichang from Shanghai, Board Your Yangtze River Cruise Ship

Disembark at Chongqing, High speed train from Chongqing to Chengdu

Free to Explore the City, then Board Train to Lhasa 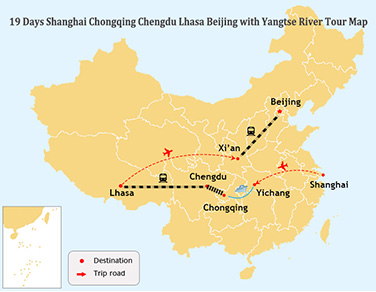 Day 3: Fly to Yichang from Shanghai, Board Your Yangtze River Cruise Ship

Today, you will be escorted to Shanghai airport for the flight to Yichang. Upon arrival, you will be picked up by the local guide and then transferred to Yichang Port to board the ship. Your once-in-a-lifetime Yangtze River Cruise starts!

In the morning, you can wake up leisurely and enjoy the gentle sunshine shinning over the Yangtze River. The ship will first pass through the Xiling Gorge, which is the longest one among the Three Gorges, with the length of 76 km in total. The winding river and strange stones make Xiling Gorge is popular attraction along Yangtze River cruise.

In the afternoon, you will follow your local English-speaking guide and make a shore excursion to the famous Three Gorges Dam. As the largest and most complicated hydropower project in the world, Three Gorges Dam was designed and constructed for the benefits of flood control, river shipping, navigation etc. It is the place where you can get a comfortable sightseeing of natural flowers, flood discharging etc.

After that, the ship will sail through the five-stage Three Gorges Dam Ship Locks, the world’s largest ship lock system as tall as a high building of 40 floors.

In the evening, you can take part in the Captain’s Welcome Party which is well prepared by the cruise company. You can not only taste kinds of delicious food and drinks, but also have great fun with dance and music.

Keeping sailing westwards, the cruise ship will head to the destination of today, the Lesser Three Gorges. As a popular place among tourists with superb natural sceneries, Lesser Three Gorges is situated on the Daning River which flows into the Yangtze River. Consisting of Longmen Gorge, Bawu Gorge and Dicui Gorge, the Lesser Three Gorges features rapids with clear green water, sheer cliffs and steep hillsides. Also, the surrounding forest is inhabited by monkeys and wild animals. After arriving at Wushan, the local guide will lead you to visit this beautiful place.

Today’s highlight will be the shore excursion to the Fengdu Ghost City. Called “the Homeland of Divine Comedy in China”, Fengdu Ghost City is the only place to present the Chinese culture of the afterlife. There are buildings, structures, dioramas as well as statues, all related to the afterlife in hell. When visiting this city, you will know about the mysterious stories about the underworld and various kinds of devils and Chinese demons.

Then enjoy a Shibaozhai Shore Excursion at about 16:00. Shibao Zhai Village is a tower with 12 floors. It is one of several high wooden buildings in China nowadays. It is the typical and symbolic buildings characterizing of Chinas southern folk architectural techniques.

In the morning, your ship will arrive at Chongqing Port, where you will go through the check-out procedures and disembark. Upon arrival, the local guide will pick you up and escort you to the train station for the train to Chengdu.

Day 9: Free to Explore the City, then Board Train to Lhasa

The whole day is free for you to explore around the city. In the evening, you will be transferred to Chengdu Railway Station for the train to Lhasa. Your Tibet Travel Permit will need to be checked before boarding.

Stay overnight on the train

Today, you will spend the whole day on the train to Lhasa. It is quite a long journey from Chengdu to Lhasa, for about 36 hours in total. You will pass through two important provincial capital cities in northwest China, Lanzhou and Xining. Xining is known as the beginning of Qinghai-Tibet Railway.

You will witness the most beautiful scenery along Qinghai-Tibet Railway. From the deserts to massive grassland, snowy mountains to turquoise lakes, all these landscapes will continually appear and strongly appeal to your eyes.

Stay overnight on the train

The Chengdu-Lhasa train will arrive in Lhasa in the morning. Upon your arrival, your tour guide will hold a board with your name on it at the exit to welcome you. A private car will take you to the reserved hotel. You may view the Yarlung Tsangpo River (the longest and largest river in Tibet) and Lhasa River on their way to Lhasa.

Tips: If this is your first visit to Tibet, you will need to acclimatize to the increased elevation, to prevent altitude sickness. This is best done by resting in the hotel and minimizing any physical exertion.

The day tour in Xian is impressive too. The Emperor’s Terracotta Army is also one of the eight wonders in the world. These terracotta warriors and horses are the size of a real army, and were buried alongside the Emperor in a vast underground palace.

In the archeological site of Banpo Village, built more than 6,000 year ago, you will see how the resident matriarchal tribe used to survive in the Neolithic age.

Located to the northwest of the Big Wild Goose Pagoda, Shaanxi History Museum is China’s first large-scale national museum. There are more than 370,000 pieces of cultural relics collected in the museum, ranging from simple stone tools of ancient humans to various kinds of objects in social life before 1840.

After the tour, you will be transferred to the station to take the high speed train to Beijing. Upon arrival, your guide will meet you and take you to your hotel in downtown area.

The Summer Palace is the largest royal garden in the world built in Qing Dynasty. The grandeur and beauty of the Palace is overwhelming and is sure to impress anyone.

The Great Wall tour proves that China was one of the strongest countries in its history. Stretching thousands of kilometers, the Great Wall protected the ancient Chinese against the invasion of the enemy from its north side for more than 1000 years; the Great Wall was listed as one of the world's eight wonders. Mutianyu Great Wall, featured “graceful”, enjoy the best quality among all Wall sections, 80km north-east of Beijing with 22 ancient watchtowers, about one every kilometer. (Cable car is optional if you do not want to walk)

Then you will visit the Ming Tombs, the burial site of the emperor Zhuli, the third emperor of the Ming Dynasty who ruled for 22 years until his death in 1424.

In the morning, you will first visit the historic Temple of Heavens, which is the largest city square in the world and the spiritual heart of China, and then move on to the famous Hutongs, the traditional courtyard residence in narrows alleys in Beijing. It is a great place to know the folk culture and old quarters of Beijing city.

After that, you will be transferred to airport for your flight to your next destination. The tour ends.

This tour will allow you to make the most of China and Tibet in terms of both cultural attractions and natural landscapes. From Shanghai to Chengdu, from Lhasa to Beijing, the itinerary is well-tailored to cover all the highlights with relaxing sightseeing in each destination.