As we begin the new year of 2022, it is time to look at what we are expecting to be the top tourist hotspots of the year in Tibet. While more of the plateau region of Tibet is being explored by tourists every year, we still believe that the top three tourist destinations for 2022 will be Mount Everest Base Camp, Mount Kailash in Ngari Prefecture, and the stunning Tibetan capital of Lhasa.

However, we want to recommend that you also try and visit the more outlying areas of Tibet, and get out to the off the beaten track destinations that can give you a much more interesting view of Tibet and its unique culture. So if you are thinking of taking a trip to Tibet in 2022, then why not try some of our more unusual destinations to give you a much more authentic Tibetan cultural experience.

Always one of the most popular destinations in Tibet, the world’s most sacred mountain is one of the most unique Tibetan experiences ever. Lying in the far west of Tibet, in Ngari Prefecture close to the borders with Nepal and India, this ancient sacred site is said to have been the site of a battle of magic between the Buddhist sage Milarepa and the Bon magician Naro Bon-Chung. 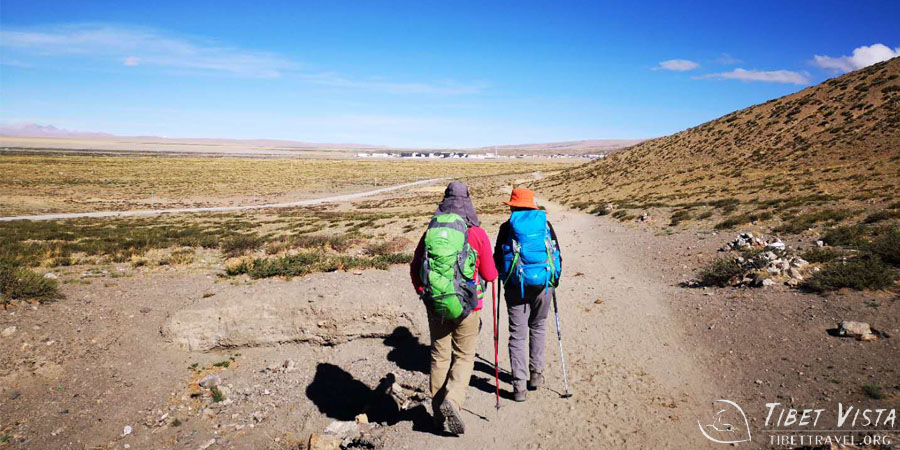 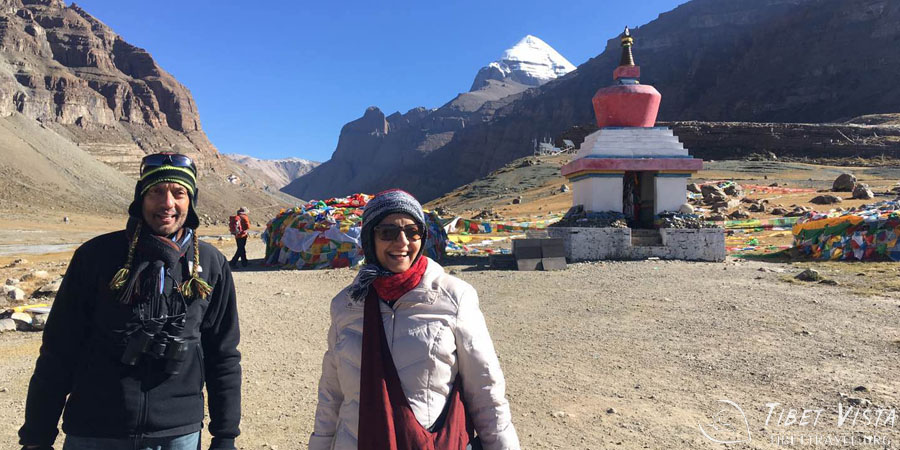 While the mountain may never have felt the tread of mortal feet (Milarepa is not counted as mortal), the kora route around the base of the mountain has felt millions of footsteps tread its course. Noted as one of the most sacred pilgrimage destinations in the world, and the most arduous trek in Tibet, the hike around Mountain Kailash is one of major achievement, whether you are Buddhist pilgrim or international tourist.

Lake Manasarovar, just to the south of the sacred mountain, is also a sacred site in Ngari, and is believed to have been the place where Buddha Gautama was conceived. Sacred also in Hinduism, the lake is believed to be able to wash away the sins of an entire lifetime, and many come to drink its waters and bathe in the lake.

No visit to Tibet is ever complete without a trip to the most iconic site on the planet, the Everest Base Camp (EBC) in Tibet. The first of the base camps to be set up at the foot of the world’s highest mountain, EBC in Tibet is the only base camp that has direct views of the summit of Mount Everest. And at 5,150 meters above sea level, is often the highest many tourists will ever reach in Tibet. 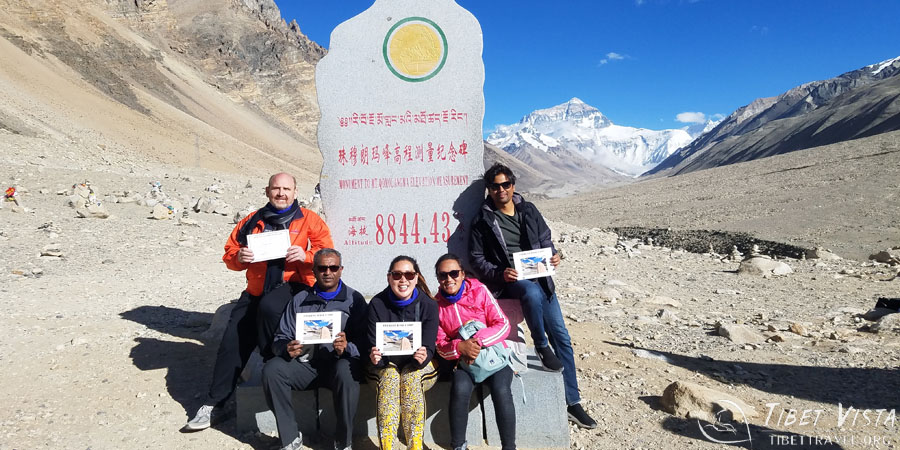 Mount Everest Base Camp in Tibet 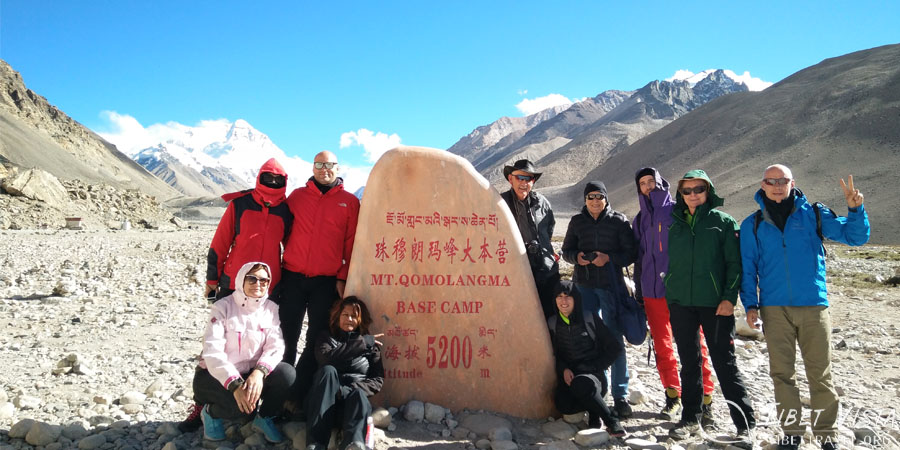 Thousands of travelers every year descend on this amazing site, and the base camp has a wider variety of attractions that just the view. As well as being able to send a postcard from the world’s highest post office, you can also visit the renowned Rongbuk Monastery, said to be the official highest Buddhist monastery in the world and the place where Sherpa Tensing was given his name. 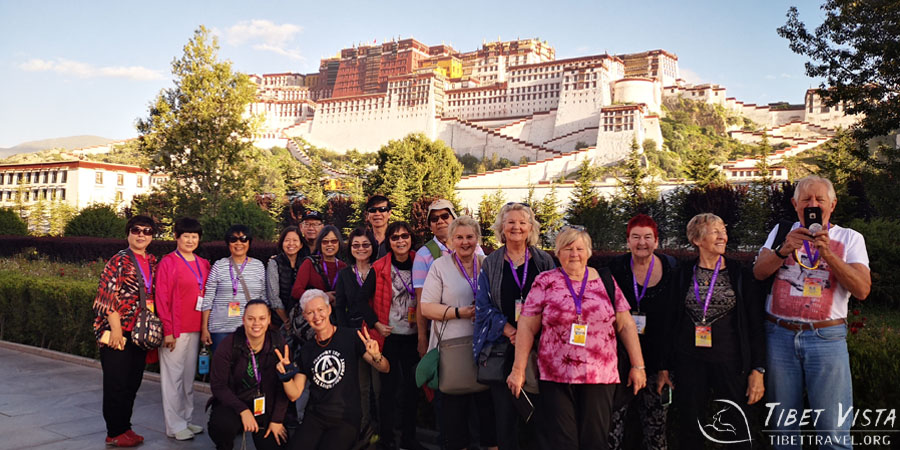 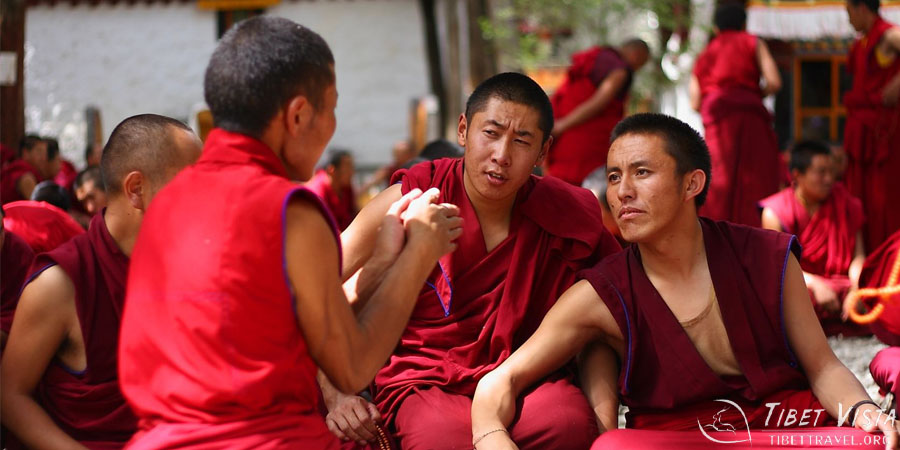 Renowned as the City of Sunshine for its inordinate amount of sunshine hours throughout the year, Lhasa is the capital of this ancient land, and was founded as the capital of the Tibetan Empire in the 7th century by King Songtsen Gampo. Home to a huge number of attractions for both tourists and pilgrims alike, this ancient capital is one of the best places to visit in Tibet, tour the sacred Jokhang Temple and walk the kora around Barkhor Street with the Buddhist pilgrims; climb up the many steps to the Potala Palace and see the former home of the Dalai Lama; and visit the Gelug monasteries of Sera and Drepung, two of the most famous monasteries in Tibet.

If you are looking at taking a Group Tour to save money, but want to experience some of the more unique aspects of Tibetan travel, then we can suggest a new idea to help you realize your dreams. Now, you can travel on a Tibet small group tour to save money, but add on additional day trips to other places not part of the tour, to reduce the cost of your travel in Tibet.

One of the best short hikes in Tibet, the trek around the famous Ganden Monastery, with its visit to the small traditional Tsubshi Village, is an awesome experience of traditional Tibetan life and living. One of the Great Three monasteries of the Gelug tradition, Ganden offers you one of the most scenic views in Tibet. Sitting on the side of Wangbur Mountain, the trek around the monastery kora route gives you some of the most amazing views on the plateau. 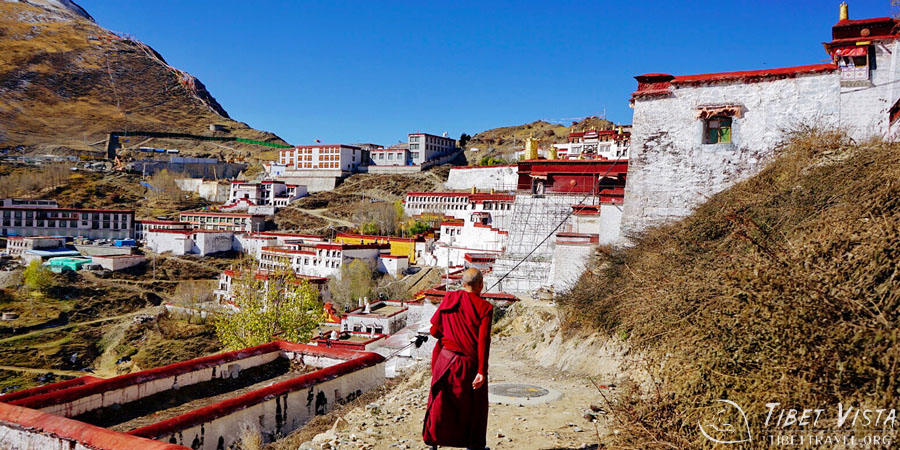 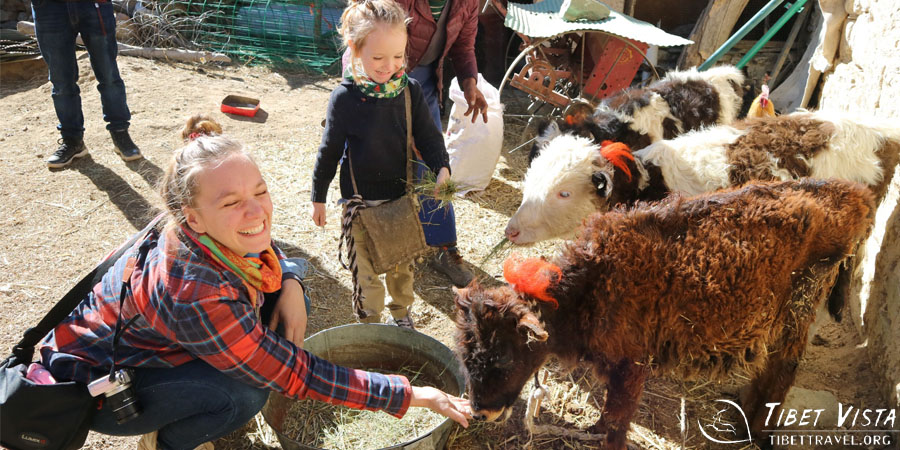 Visit to the Tsubshi Village in Tibet

And after taking on the kora hike, which normally takes just a couple of hours, you can drive back down the hill to the beautiful and traditional Tsubshi Village. The village is a perfect example of the traditional way of life that many of the smaller villages and townships in Tibet still live in, and is a unique opportunity to learn more about rural life in Tibet. And you can sit and talk to the locals through your guide, as well as break bread with them to taste the typical Tibetan dishes of the rural people.

The Drak Yerpa Monastery, lying on the steep cliffs above the Drak Yerpa Valley, is located by one of the most sacred cave hermitage sites in Tibet, once used by both Guru Rinpoche (Padmasambhava) and his consort, Yeshe Tsogyal, the Indian sage Atisha, and the Tibetan king Songtsen Gampo. The monastery was actually commissioned by the king’s Tibetan wife, and the trek up through the complex of caves that cover the hillside above the monastery is a reward in itself for the 2km climb. 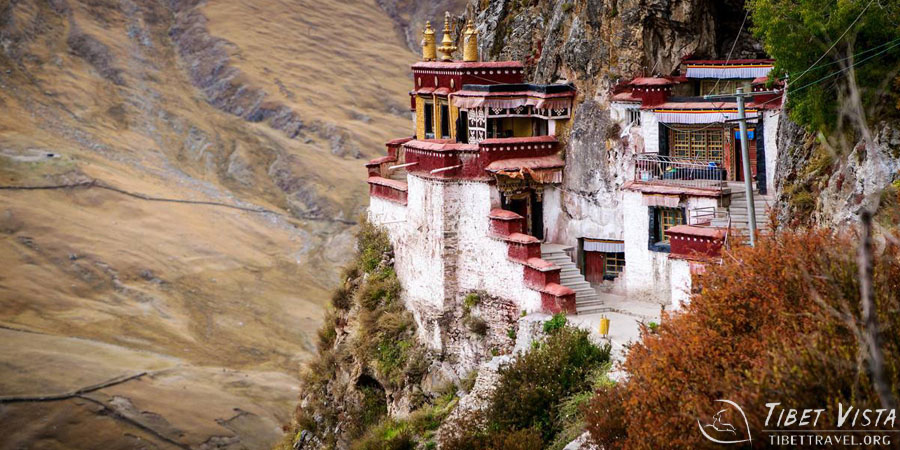 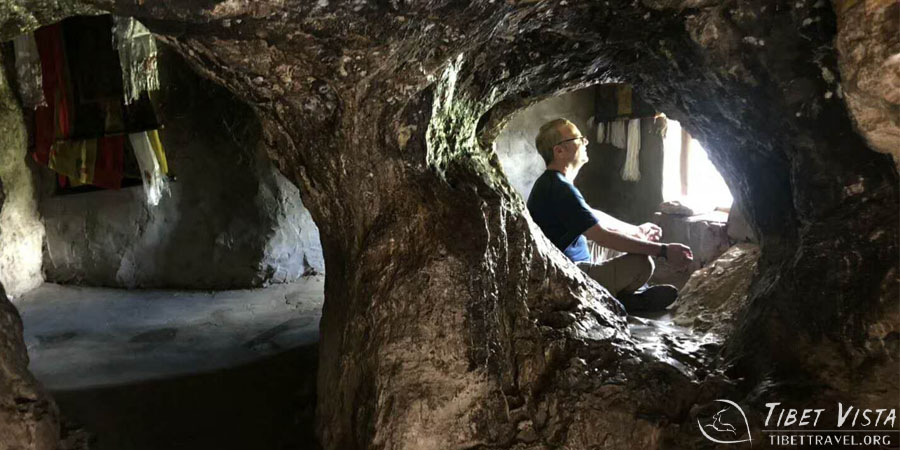 There are a huge number of caves in the cliff face, and while there are believed to be 108 in total, an auspicious number in Tibetan Buddhism, only ten are open to the public. From the Rigsum Gompo Cave and the Demdril Drubpuk to the yellow Jamkhang, the Drubthub-a, and the Chögyal-puk, you will be filled with a sense of ethereal wonder and serenity, and truly understand the reason these caves were popular as meditation retreats.

One of the most enthralling short treks in Tibet, the hike from the Pabonka Monastery to the Sera Utsé hermitage is an amazing way to explore the many hermitage sites and nunneries in the area. Covering a distance of only 11kmm which can be done in around 7-8 hours, you can start the trek with a visit the toe monastery where the first written Tibetan alphabet was formed, and visit the meditation caves below. 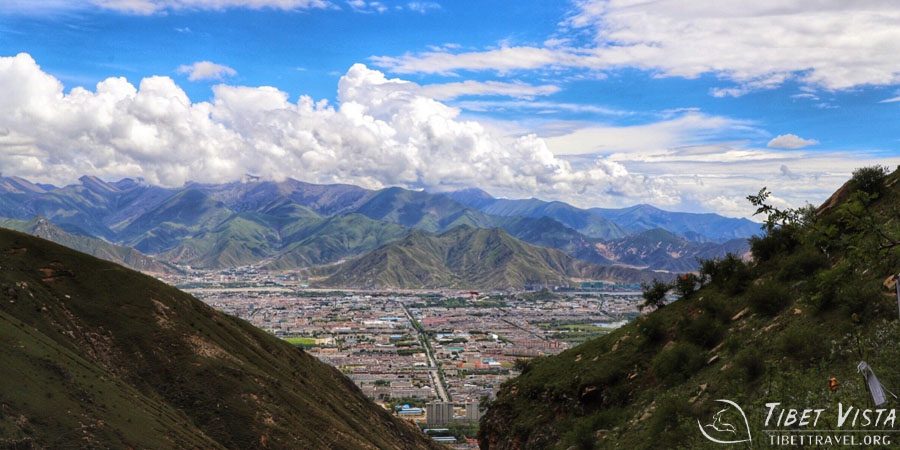 Aerial-view of Lhasa city during Pabonka to Sera Utsé trek 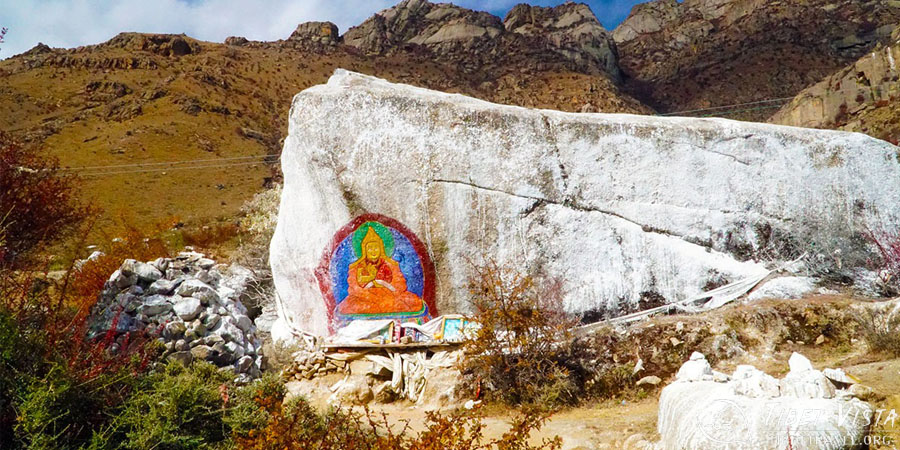 Scenery on the way to Sera Utsé trek

The hike takes you on from Pabonka to Tashi Chöling Hermitage, a 7th century hermitage, and then on to the Takten Nunnery, hidden under the peak of the small mountain. From the small isolated nunnery, you continue on to the Sera Utse Hermitage, sitting high on the cliff above the famous Sera Monastery. One of the most favored hermitage retreats of Tsongkhapa, Sera Utse gives you some of the most beautiful sweeping views out over the City of Sunshine. 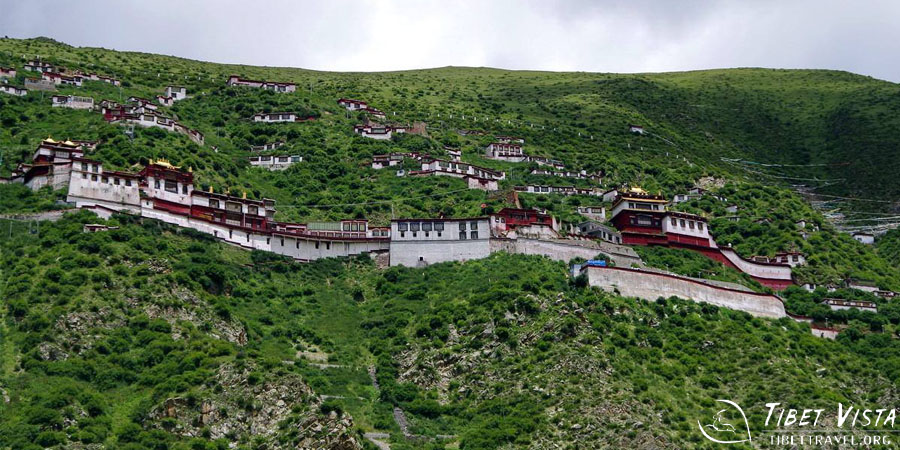 Drigung Til Monastery in Tibet 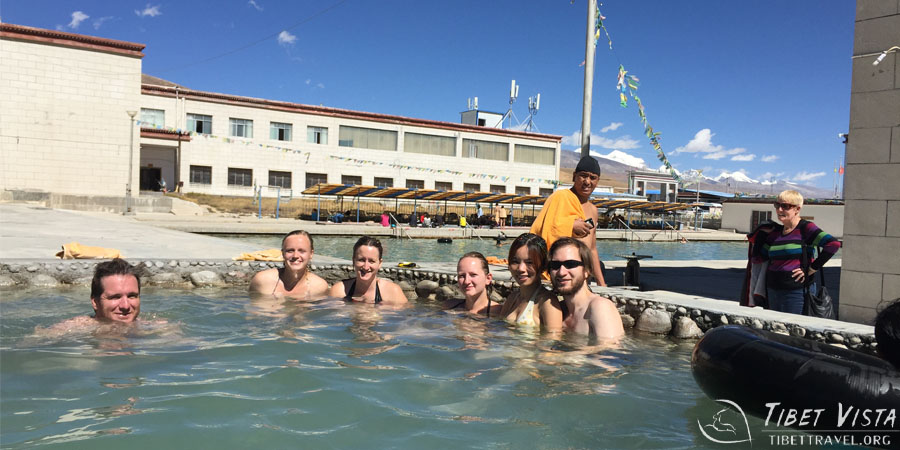 An awesome tour that takes you to some of the lesser-visited places around Lhasa, this is a great opportunity to get down into the real essence of Tibetan life and explore some of the places that are more remote in the area. The tour takes you to some amazing places, including the Drigung Til Monastery, a Kagyu Monastery with a popular Sky-Burial site nearby; the beautiful Dezong Hot Springs, one of the most popular hot springs in Lhasa for locals; and the ancient Reting Monastery, founded in the 11th century by a disciple of Atisha. 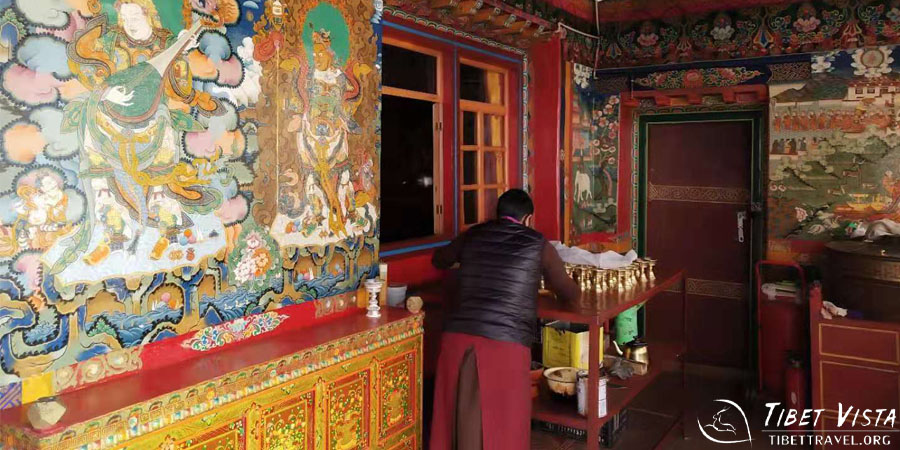 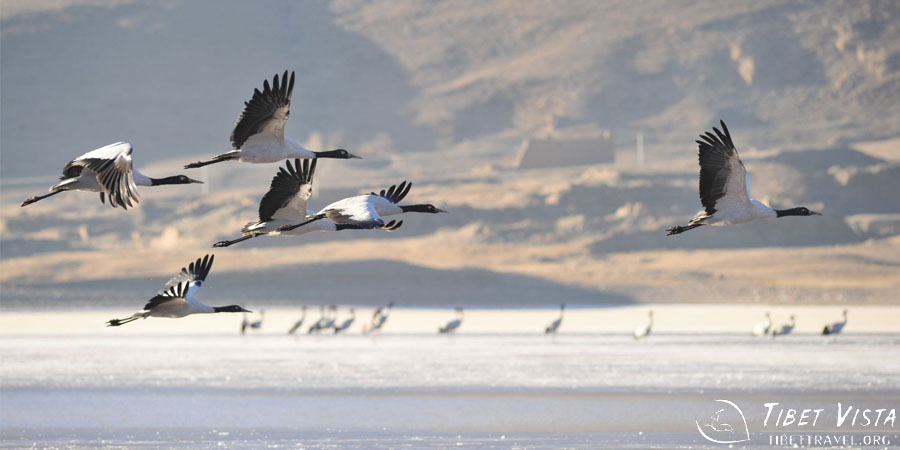 You also stop to visit the beautiful Yangpachen Hot Springs, with its stunning location in the Nyenchen Tanglha Mountains to the north of Lhasa city; the Chimelong Nunnery, also known as the Phyirmil Lung Nunnery, one of the most remote in Lhasa; Tsurphu Monastery, the traditional seat of the Karma Kagyu lineage of Tibetan Buddhism, founded in the 12th century; and the beautiful Shongse Nunnery.

Shalu to Nartang Trek with the Exploration of Old Trade Route

The famous Shalu to Nartang trek takes you through some of the beautiful countryside around Shigatse in a loop trek that takes just two days. The trek starts at the beautiful Shalu Monastery, the seat of the Buton Rinchendrub, one of the great masters who helped translate the Buddhist texts from Sanskrit to Tibetan. 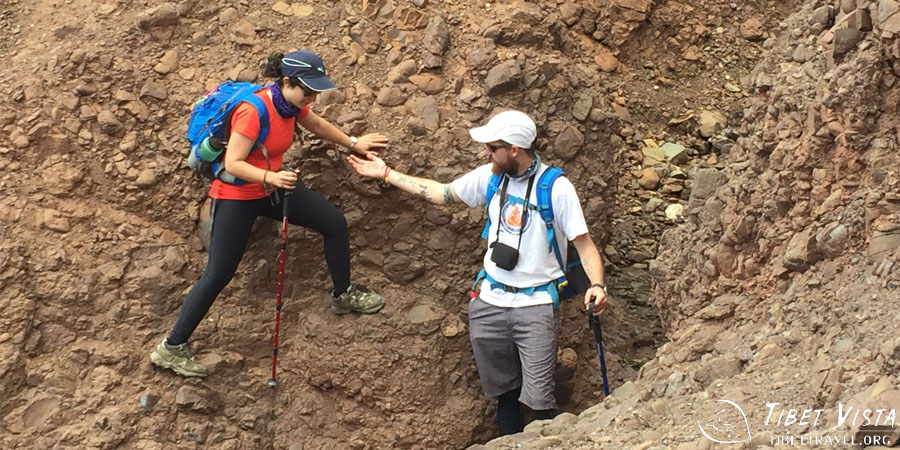 Trek from Shalu to Nartang 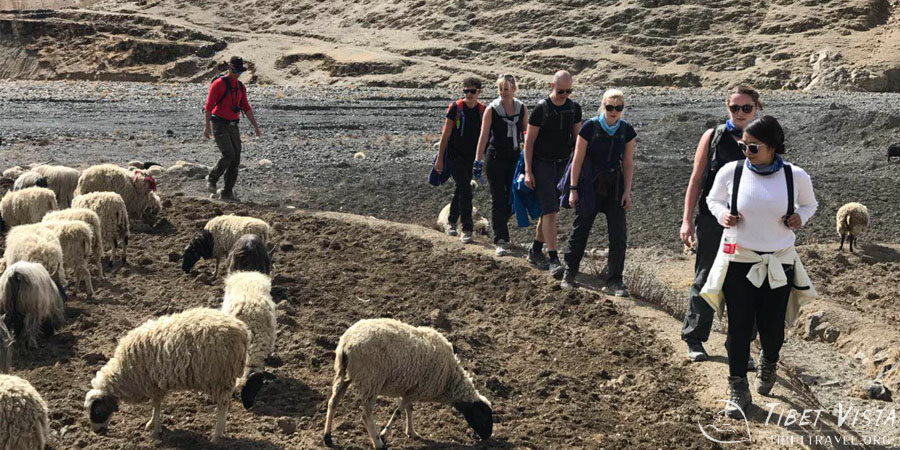 Crossing several high passes, as well as visiting the villages of Phunup and Ngor, as well as the Ripu Hermitage and the stunning Ngor Monastery, this 26km trek is an awesome experience.

With many out-of-the-way places to visit in Tibet, just in the area around Lhasa, you have the chance to take a closer look at Tibetan lifestyles and the unique culture of the plateau people. These add-ons that you can tack onto a classic Lhasa tour make for great opportunities to explore more of Tibet without having to spend lots for a private tour. So why not treat yourself in 2022 to an awesome and inspiring tour of Tibet, the land at the Roof of the World.