The Tibetan style of clothing and adornment can be roughly classified into four major types in terms of the four regions: East Tibet, South Tibet, Middle Tibet and North Tibet. Again, the four types can fall into two major types: that for the farming area and that for the pasturing area. All those types vary with different sexes, social statuses and identities. This is the common characteristic of Tibetan costumes of all regions. As Tibetans live in a vast area and there are many mountains and rivers separating them from each other, even in the same minority, there are quite different styles of clothing and ornament. 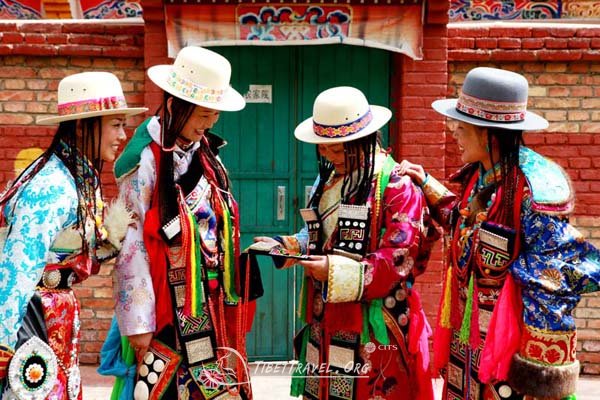 The Tibetan habiliment is a component of the mode of cultural life of the minority while personal adornment is an important part of the habilatory culture of the Tibetan ethnic minority. What they use as adornments on their body fall into two kinds: gold and silver articles, and natural gemstones.
Of Tibetan habiliment culture, the headwear is an adornment with the strongest local flavor, forming an aesthetical taste with regional feature and symbolizing the dressing styles of different regions. 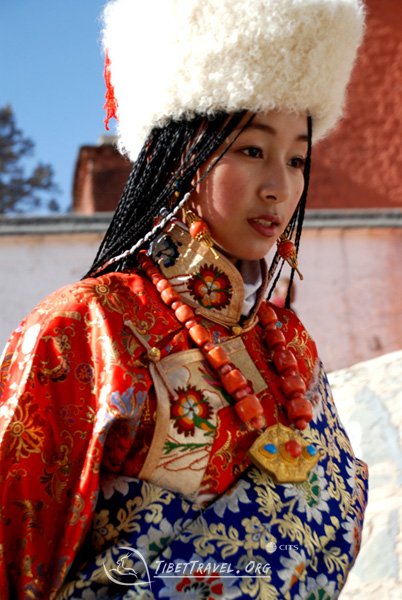 Most Tibetan women plait their hair into numerous small pigtails, and their headwear is usually a natural gemstone, such as amber, coral, agate, etc. In styles of wearing, some fix the adornment directly in the pigtails, some fix all kinds of headwear they have chosen onto a piece of cloth which is close to the hair color, and then connect it to their pigtails: being both beautiful and convenient. For the convenience of putting on their self-made woolen felt poncho and hat, the pigtails and the headwear usually concentrate on the lower part. Married women in North Tibet divide their long hair in the middle, plaiting them into many pigtails; from the dividing part on the forehead, they string some coral, emerald or other gemstones on their thin pigtails; they plait their hair at the back into one thicker tail, and on it fix some silver coins whose size decreases gradually from top to bottom.
Unmarried women plait their hair into one or two tails, without much adorning.