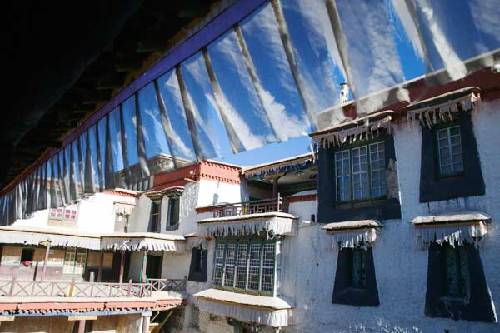 Pala Manor is a major tourist site in Gyangze county, Xigaze.
But one floor below, the serfs were crammed in dark, cave-like dens and toiled their lives away. Not for very long though, as Pubu Tsering, the guide at Pala Manor explains. The life expectancy for the serfs was 28.

That number is made manifest on March 28, the Liberation Day for serfs. It has also become many of the survivors' birthdays since they did not track dates before 1959.

Prayer rooms are scented, flowers bloom in sunlit living rooms, table trays are filled with local snacks, and hosts won't stop nudging you to have yet another bite of cheese balls, sweetened fried dough, sweets and buttered tea.

When you're stuffed, visit the local fair. If you're lucky, you'll catch horse-racing, platoons of Tibetan dancing and Tibetan Opera singing. The 12 counties of Xigaze have been rotating fairs among themselves year-round with performances by local villagers.

Then set aside a whole morning (and morning only, if you observe the tradition) for the prefecture's crown jewel, the Tashilhunpo Monastery, in the city of Xigaze.

It is one of the Six Big Monasteries of the Gelugpa (Yellow Hat Sect). It's almost 600 years old. It has the world's biggest statue - 26 meters in height - of a sitting Maitreya Buddha, inside its Maitreya chapel.

It houses the sacred stupa-tombs of past Panchen Lamas. There is the Thangka Wall that oversees the city. On average, 10,000 Tibetan Buddhists come to the monastery every day.

The monastery is an amazing experience not only for its stunning use of gems, silver and gold in construction, or its exquisite murals, but for its people as well.

From all over Tibet, believers come to bow down and circle the monastery. They come to ring the bells three times dutifully at each chapel. Holding their palms open, they line up to pray for harmony in the cosmos.

And the lamas, who are well-versed in scriptures as well as math, astronomy and other sciences, chant peacefully alongside them.

And right there, you get dazed again.