Kathmandu Temples: The Must-see Temples for Your Nepal Trip

As well as being the capital of Nepal and its largest city, Kathmandu is the arrival point for majority of the visitors to Nepal, and is often used as a base of operations when traveling to the outlying regions of the Terai and lowland jungles or the high-altitude trekking areas of Annapurna and Everest. Spreading across most of the Kathmandu Valley area, the capital city is a massive urban agglomeration that includes the cities of Lalitpur, Kirtipur, Madhyapur, Thimi, and Bhaktapur with a population of more than five million people.

Lying at an altitude of around 1,400 meters above sea level, this ancient and exotic city is the center of Nepali civilization, and the Kathmandu Valley is widely referred to as the “real Nepal” by much of the population. Once the royal capital of the Kingdom of Nepal, it is home to hundreds of temples, shrines, and stupas, and is often called the “city of temples”. Walking around the city itself, it is hard to travel more than a hundred feet without passing yet another temple or stupa. Every square or street corner seems to have either a temple or a stupa there.

The city also contains the Durbar Royal Square, the palaces of the Royal Family of Nepal, and Nepal is widely known as the only Hindu Kingdom in the world, since around 80 percent of the population are Hindu. However, with the influence of Buddhism in the country and with it being the birthplace of Buddha, Hinduism in Nepal is tinged with rituals and prayers from the Buddhist religion, which makes it unique in the world.

The Major Temples of Kathmandu

Being a mainly Hindu country, Nepal has a huge number of stupas and temples, spread all across the nation, from the highest points of the Himalayas right down to the lowland jungle areas near the Indian borders. Hinduism recognizes a huge number of deities, both gods and goddesses, and it is said that there are around three hundred and thirty-three million deities in the Hindu religion, many of whom have their own temples or stupas across the Hindu regions of the world.

Built in the 5th century and dedicated to the Lord Shiva, Pashupatinath Temple is one of the four major temples of Nepali Hinduism. The site of the temple, which lies around 5 kilometers to the northwest of Kathmandu city center, is said to have been a religious site for several millennia, and a lingam of Shiva was discovered there in around the 1st century AD. Legend says that there was a temple on the site in around 400 BC, when Pashupati, the Lord of all Pashus, resided there as a god. 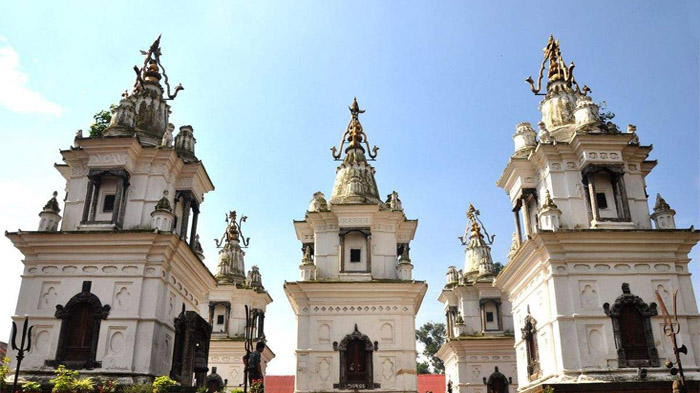 A pagoda-styled temple, the main roof is gilded with the four sides of the temple covered in silver, and it is the largest temple complex in Kathmandu. Around the main temple, the complex is made up of dozens of other smaller temples, dedicated to the various Hindu and Buddhist deities.

Lying on the banks of the Bagmati River, the original Pashupatinath Temple was consumed by termites towards the end of the 14th century. It was erected anew in the 15th century by the Lichhavi king, Shupuspa, and the other temples have been built over the centuries since.

While there are many legends surrounding the temple and its history, the temple is unique in that it is the only temple whose lingam is always dressed in its golden robes, except at the time of Abhisheka, when the idol is unclothed. That is the only time when the ritual pouring of milk onto the lingam can occur. Another unique feature of the temple is that only four of the highest priests can touch or pour the milk on the lingam, and these are all Bhatt priests, while the Bhandari priests are used as their helpers and temple caretakers.

Unlike other Hindu temples, the higher priests of Pashupatinath are not chosen through heredity, but are chosen from the scholars of the Rig Vedic Recitation. Only after they have mastered all of the qualifying criteria can these scholars be chosen as priests in the Pashupatinath Temple.

Lying around 11 kilometers from the center of Kathmandu, in the northeastern outskirts of the city, Bouddhanath Stupa is the largest stupa of its kind in Nepal, with one of the largest mandalas in the world. A Buddhist stupa in a mainly Hindu country, the spire of the stupa and its great dome dominate the skyline, and has been the site of the construction of many gompas that have been built for the large population of Tibetans in the area. 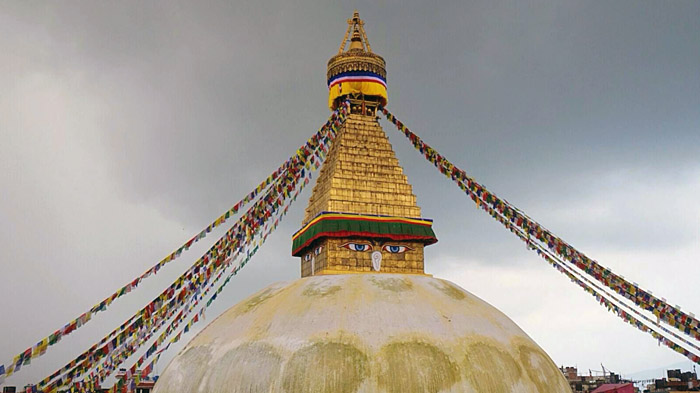 The stupa was built in around the 14th century, and lies on the ancient trade route from Tibet, which enters the Kathmandu Valley in the northeast, and heads down past Bouddhanath to the Bagmati River, and on to Lalitpur, missing Kathmandu City completely as the city was founded later. Traveling the route, Tibetan merchants would stop to rest and pray at the stupa, and many of the refugees that left Tibet in the 1950s settled in the area around the stupa. The stupa is also said to contain the entombed remains of the Kassapa Buddha, the 27th of the 29 Named Buddhas, who is said to have lived for more than 2,000 years after his enlightenment and stood twenty cubits tall (around 8.8 meters).

Also known as the “monkey temple”, because of the holy monkeys that live in the northwestern parts of the temple, Swayambhunath Stupa sits atop a small hill in the northwest f the Kathmandu Valley area. A great place to get some of the most stunning panoramic views of the Kathmandu Valley below, the hill lies just 3 kilometers from the outskirts of Kathmandu City and the temple is said to be one of the holiest Buddhist Chaityas in Nepal. 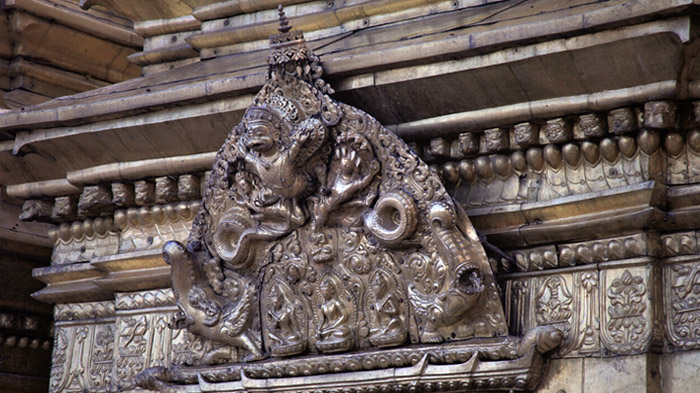 Swayambhunath is the oldest temple stupa of its kind in Nepal, and legend tells that the temple evolved spontaneously when the valley was created, after the primordial lake that once lay in the valley drained away. The site of the temple is surrounded by dozens of shrines and smaller stupas, as well as several monasteries that have been built on the premises.

The name literally means “self-existent one”, in reference to the belief that it just came to be, although inscriptions in the temple that date back to around 460 AD show that the temple was built by King Manadeva. The Tibetan name for the temple is translated to mean “Sublime trees”, though it is believed that this is a corruption from the Nepali Bhasa name, Singgu.

Among the most sacred Buddhist sites in Nepal, second only to Bouddhanath, it is a popular destination for the many Buddhist pilgrims that cross Nepal to pray at the temple and walk the kora around the hillock on which it sits. The sides of the tower of the stupa have the eyes of Buddha painted on each of its four sides, complete with eyebrows, and between them is written the Devanagari script for the number one. 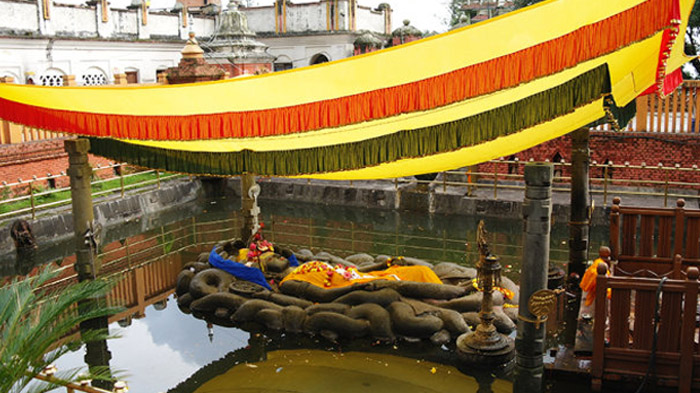 The Huge Statue of a Reclining Lord Vishnu in Budhanilkantha Temple

Known also as the Narayanthan Temple, its main statue of the reclining Vishnu is around 5 meters long and was carved from a single block of black stone. Surrounding the statue is a recessed pool, more than 13 meters long. The depiction of Budhanilkantha lies on the coiled body of the cosmic serpent, Shesha, and on the forehead, beneath the silver crown that adorns the head of the statue, is the carved image of Buddha. This unusual combination of religious images has made the temple a sacred place for Buddhists as well as Hindus.

The most unique thing about the statue at Budhanilkantha Temple is that it appears to be a stone statue that floats on the water of the pool. Due to the religious significance of the statue and its sacred nature, scientific examination has been limited. It is believed that the rock is a form of silica, similar to pumice rock from lava, with an extremely low density. However, this does not explain how the statue manages to float on the water, and the phenomenon has fascinated the scientific community in Southeast Asia for decades.

One of the oldest temples in the Kathmandu Valley, the Changu Narayan Temple is located on a small hill around 12 kilometers to the east of Kathmandu. Somewhat off the beaten track for tourists, the temple is dedicated to Changu Narayan, one of the four incarnations of Lord Vishnu. The earliest form of the temple was constructed in the 4th century from wood and metal, and has stood the test of time for more than 1,600 years.

The later additions to the temple, which surround the main central structure, were constructed at different points between the 8th and 10th centuries. A sacred Hindu religious shrine of great importance, the temple holds around six different festivals throughout the year, many of which are attended by high priests from the Hindu temples in the Kathmandu Valley. 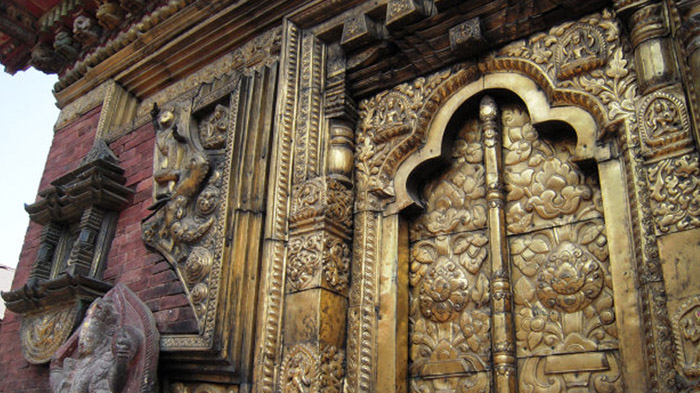 The Golden Door of the Main Hall in Changu Narayan Temple

Perched on its small hill, the temple stands tall above the rice paddies of Bhaktapur and can be seen for miles around. The views of the snow-capped mountains to the north are also one of the most spectacular sights of the area.

On the struts of the temple are inscribed the histories of the ten incarnations of Narayan, and a life-sized statue of Vishnu’s vehicle, the half-man, half-bird known as Garuda, kneels before the temple. The temple also contains many other statues, most of them being representations of Lord Vishnu, as well as a stone tablet, inscribed with the year 464 AD, which tells of the Nepali King, Dharmaveda, who died suddenly in mysterious circumstances. He was succeeded by his son, who had the stone inscribed and placed in front of the temple. Some of the inscriptions on the stone prove that the temple is much older than the date of the stone.

0 Comment ON "Kathmandu Temples: The Must-see Temples for Your Nepal Trip"