How to Plan Holidays to Nepal from the UK

Officially known as the Federal Democratic Republic of Nepal, this land of mountains and jungles lies in the Himalayan Mountain Range between India and the Tibet Autonomous Region of China. Completely landlocked, Nepal has become a popular tourist destination for hikers, adventure seekers, and wildlife fanatics, and has a very varied landscape that includes high mountains, rolling hills, and sub-tropical jungles.

The largest sovereign Himalayan state, Nepal has a very diverse geography, with eight of the world’s highest mountains including Mount Everest, forested alpine hills on the foothills of the Himalayas, and the lowland Terai region with its fertile rolling plains and dense sub-tropical jungles. The nation’s capital and largest city is Kathmandu, and the country is multi-ethnic with its official language being Nepali.

Nepal is mainly Hindu, with a small percentage of Buddhists, although many of the Buddhist rituals and traditions have been carried over into their Hindu religion, and the mix makes Nepalese Hinduism a unique religion in the region. The country has hundreds of Hindu shrines and Buddhist temples that date back over 2,000 years, one of the oldest being the Maya Devi temple in Lumbini, which was built on the site of the birthplace of Siddhartha Gautama, the first Buddha. The name, Nepal, has been recorded in the Vedic Scriptures from the beginning of Hinduism, and there have been people living in the area that is now Nepal since the Neolithic age.

Planning a trip to Nepal is not actually as hard as many people think it might be, since Nepal’s primary industry is tourism, and the Nepalese government makes it as easy as possible for tourists to enter the country. Several travel agents in the UK offer Nepal trips, and you can book a pre-arranged tour through them or one of hundreds of local tour operators such as Tibet Vista, or you can make your own arrangements easily enough to save on the increased cost of the trip with a travel agent.

About Nepal Tourism and How Unique it is for UK Tourists

Tourism is Nepal’s largest industry and the largest source of foreign currency in the country. Revenue from tourism accounts for almost 80 percent of the countries international revenue, and almost 40 percent of the population work in or with the tourist industry. With eight of the world’s highest mountains within its borders (although Everest is actually shared with Tibet), mountaineering and high-altitude trekking are two of the country’s most popular activities.

Adventure tourism and eco-tourism are predominant attractions for foreign visitors to the country, as well as the unique Nepalese Hindu temples and Buddhist monasteries that can be found all over the country. To the west of Kathmandu lies Lumbini, the birthplace of the founder of Buddhism, which has become a very popular tourist attraction for foreign visitors and a place of pilgrimage for Buddhists from around the world. 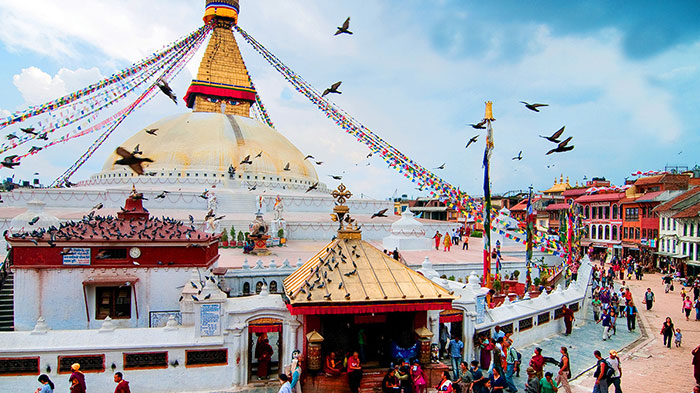 Over a million tourists come to Nepal every year, with over 50,000 coming from the United Kingdom. The major attraction for those who are not into mountaineering and hiking are the wilderness tourism opportunities, which include activities such as bungee jumping, mountain biking, rock climbing, paragliding, and hot air ballooning over the Himalayan Mountains. You can also explore the waterways of Nepal by means of kayaks, canoes, or white water rafts, or take a jungle safari in the Terai region of the country, where you can often see the one-horned rhinos, elephants, and even the Bengal tiger.

Weather and When To Go to Nepal

The climate in Nepal varies depending on the region and topography, which ranges from sub-tropical to arctic. Nepal has a four season climate across the country, which is affected by the summer monsoons. The temperature in spring (March to May) is warm in the lowlands and mild in the mountains, and is one of the best times of the year for hiking and mountaineering, with April and May being the prime window for climbing Everest. It is also the time when the rhododendron, the national flower of Nepal, blossoms across the country. 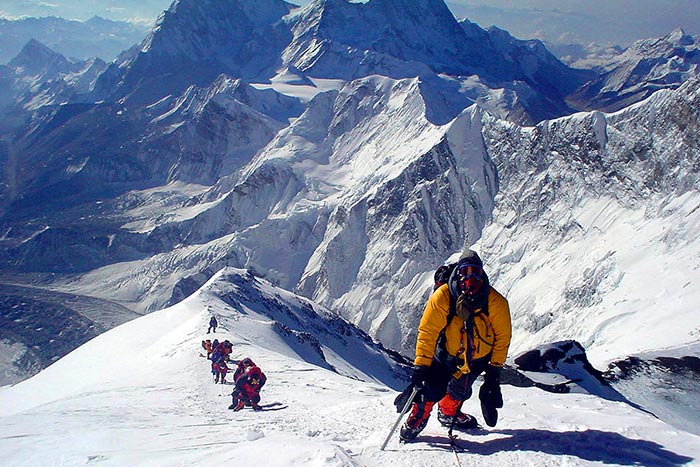 Summer is the monsoon season, and the weather is hot and wet at the same time. It rains almost every day, though usually in the afternoon or evening, with the occasional thunderstorms in the evenings. As the elevation gets higher, the rain becomes less frequent, and there are some area where it hardly rains at all. Autumn is another great time for trekking and adventure holidays, with its warm weather and clear skies. The monsoon rains are over, and the vegetation is still lush and green, making it a great time to explore the lowland regions and head out on a jungle safari. Autumn is also the peak season for trekking, and the trails around Everest and Annapurna get a little crowded.

Winter in Nepal is cool and mild in the lowland regions, with snow in the mountains. Trekking is still a popular activity in the lower hills in winter, and in December it is still possible to make the trek to Everest Base Camp, which has fewer visitors at this time of year. January can get very cold in the Himalayas, and trekking is out, although the lowland regions are still mild, and there are plenty of activities that can be arranged, all without the crowds of the high season for tourism.

How to Get to Nepal from UK

There are no direct flights to Kathmandu from the UK, and all connecting flights will be via airports in either the Middle East or India. The flight time varies depending on the connection airport, and can be anywhere from 11 hours to 15 hours, with waiting times for connections. There are multiple airlines that offer connecting flights to India, Turkey, Dubai, Abu Dhabi, or Muscat, from where the connecting flight is direct to Nepal. Costs for the flights vary depending on the airline s and routes used, and can start from around £386. It is best to book online through the comparison websites, as they will be able to find the best price, and booking around 6 weeks in advance can get you a much lower price.

Traveling overland to Nepal is not advised unless you are experienced in using the Indian rail network, or are traveling through Tibet from China to get to Nepal. Travel through Tibet requires a pre-arranged tour with a registered tour operator and several permits to allow you to travel through Tibet, as well as a Chinese Entry Visa, although entry to Nepal from Tibet is the same process as entry via the airport, and the Visa On Arrival service is available at the border crossing. Entry from India has the same requirements, and there are nine entry points you can choose from along the Nepal-Indian border. However, the Indian railway network can be confusing for first-time travelers to India, and it is not recommended for your first trip to Nepal.

Currency and Money Exchange in Nepal

The local currency in Nepal is the Nepalese rupee, which is similar in value to the Indian rupee. However, US dollars are widely accepted throughout the country, and are required to pay for the visa on arrival at the airport. Indian rupees are also widely acceptable in Nepal, though if you wish to change your dollars or other currency for Nepalese rupees, then there are plenty of places to do so, from the airport exchange desks to the small local shops and money changers. With a huge tourist industry, these money changers can be found all over the country, and on almost every street corner in Kathmandu. However, make sure that you have used all your Nepalese rupees before exiting the country, or have changed them back to dollars, as you are not permitted to take the currency out of the country, and any currency you attempt to remove will be confiscated. 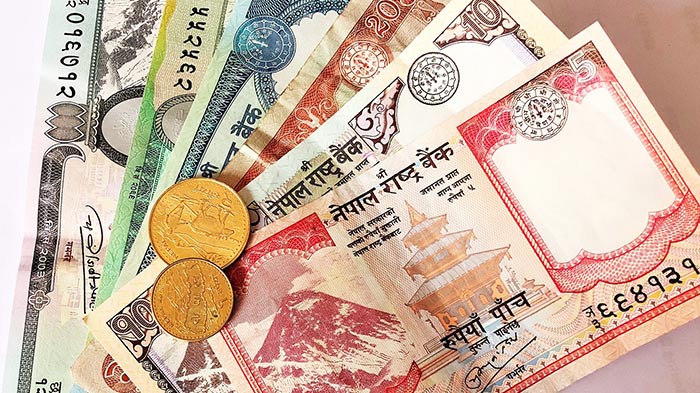 Visa Requirements for the British

Nepal has some of the world’s most lax visa requirements, and the Nepalese government has made it easy to obtain a visa to promote their largest industry, tourism. Visas are available on your arrival at the country’s only international airport, Tribhuvan, and all major border crossing points with India or China for almost all passport holders, with a few exceptions.

While citizens of India do not need a visa, and can freely enter and leave the country and even reside there with no restrictions, for all others, a visa is requires. For British passport holders, the Visa On Arrival service is available at the Tribhuvan International Airport or ten border crossing points, and requires a passport with at least six month’s validity at the time of entry, two passport photos, and the visa fee.

On your arrival at the airport, or beforehand through the website of the department of Immigration, you will need to fill in the Tourist Visa Form. If you have done it through the website, you will be given a barcode receipt to print and produce to the immigration officials within 15 days of issue. If you have not used the website, there are kiosks available in the airport for filling in the form, which then print a small slip to present to immigration. Once complete, you will need to make the payment for the visa at the counter in the airport for payments. Visa fees vary depending on the length of the visa, and the costs are: 15 Days-  25 US dollars, 30 Days – 40 US dollars, and 90 Days – 100 US dollars. The fee is usually required to be paid in US dollars, although they do accept Sterling and Euros in the airport counters.

Once you have made the payment and have the receipt, you can proceed to the immigration desk to obtain your visa. Hand over all the documents, passport, and photos to the immigration officers, who will make the necessary checks before processing your visa. It is a good idea to stay nearby while waiting, as the immigration officials sometimes have problems pronouncing foreign names, and will often just hold up the passport with the photo page facing outwards to call the passport holder to collect their visa.