Adventurous Things to Do in Nepal: must-dos for adrenaline junkies

Well known for being one of the most awesome adventure activity locations in Asia, Nepal is a land of high mountains, deep valleys, rushing rivers, and dense jungles. And for an intrepid adventurer, there are few places better in the world for that all-important adrenaline rush. The unique landscape of Nepal, from the high Himalayan mountains to the lowland jungles, allows for a wide range of adventure activities, from trekking to Mount Everest and the Annapurna Range to skydiving and white-water rafting down some of the world’s best rivers. If you love adrenaline sports, the following adventurous things should definitely not to be missed.

Trek in Nepal, the No.1 Choice for Adventurous Souls

Undoubtedly one of the best places to travel to for trekking, Nepal offers a huge range of awesome treks, many of which take you to the world’s highest mountains, stunningly clear alpine lakes, and along areas of outstanding natural beauty that have the most spectacular views. 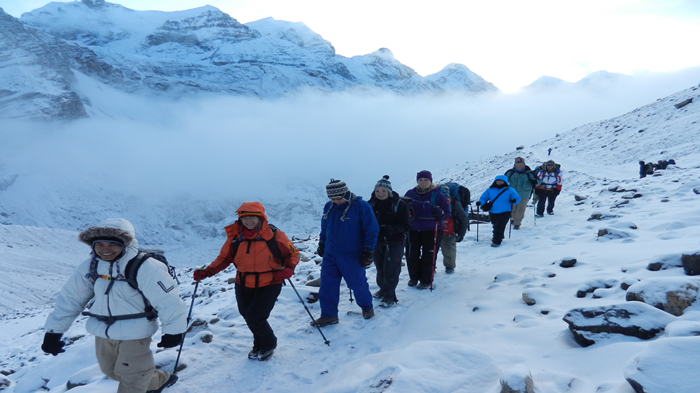 Trek in Nepal, the optimal choice for adventurous souls.

The top three adventure treks in Nepal are: the Everest Base Camp Trek via Gokyo Valley, a 19-day trek to the heights of the Mount Everest Base Camp (EBC), at 5,364 meters above sea level, from where Hillary departed to be the first man on the summit via the famous Gokyo Lakes and the Nogzumba glacier; the Annapurna Circuit Trek, an 18-22 day trek around the huge Annapurna Massif that includes trekking to two of the world’s highest mountains and through the country’s deepest gorge almost to the edge of the Tibetan plateau; and the Manaslu Circuit Trek, a 17-day adventure trek that centers on Mount Manaslu, the 8th highest mountain in the world, and gives you the chance to follow the ancient salt trade route around some of Nepal’s oldest Buddhist monasteries and Tibetan communities.

One of the most exciting and fastest growing adventure sports in Nepal, mountain biking has come a long way from the original trails through the Kathmandu Valley, and gone off to explore the heights of the Himalayas. With so many ancient trails in Nepal, there are an abundance of mountain bike trails to choose from, and while the Kathmandu Valley Trail is still the classic tour for most, other routes, such as Pokhara to Kathmandu, the Annapurna Circuit, the amazing Mustang Region trails, or the multitude of trails in the lower Everest Region of the Sagarmatha National Park. Whether you are just starting or have been biking for years, Nepal has something for everyone. 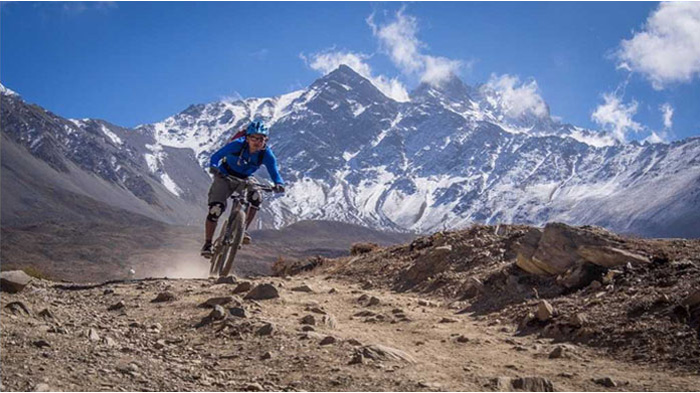 Whether you are just starting or have been biking for years, Nepal has something for everyone.

Another newcomer to Nepal, paragliding is all about riding the thermals using a wide parachute-type single-wing glider, which is launched from the top of a hill or cliff by foot. Most paragliding sessions in Nepal are tandem, with the traveler sitting in a separate harness in front of the pilot. Pokhara is one of the best locations for paragliding in Nepal, as the thermal currents are stable, with plenty of excellent take-off and landing points. And one of the best places to go paragliding around is the Annapurna Massif, with its high peaks and stunning landscapes. Imagine sailing across the Himalayas, getting the world’s best photos, from ABOVE!!

Rafting, Kayaking and Canyoning in Nepal

If there is one thing Nepal has plenty of, its river gorges and canyons. The rivers have been flowing out of the mountains for millions of years, cutting their way through the beautiful landscape, carving out amazing river gorges, canyons, and rapids. And in these amazing locations, kayaking, rafting, and canyoning are all available. Take a raft of around eight people on an intrepid adventure down some of the best white water in Nepal, on the Trishuli River, or take a kayak out on your own to explore the rapids and rushing waters yourself. If you are feeling very adventurous, then maybe try canyoning, a modern and technical way to explore canyons and gorges. Using a variety of techniques, including rappelling, jumping, abseiling, climbing, and swimming, make your way through the canyons and gorges in this amazing form of adventurous trekking, which is not for the faint-hearted.

Bungee Jumping is one of the most amazing experiences of your life, and in Nepal, there are two locations where you can try it out in some of the best scenery in the world. It is the perfect location for those mid-bungee photos. Bungee Jumping in Nepal can only be done at two locations, one in Hemja near Pokhara, and another at Tatopani, on the Tibet-Nepal border near the former border crossing of Kodari. Both designed by New Zealand’s leading bungee jump experts, these two amazing sites can give you the ultimate thrill of freefalling up to 240 meters (787 feet) from either a high tower (160 meters) or from the suspension bridge over the deep valley of the Bhote Koshi River. 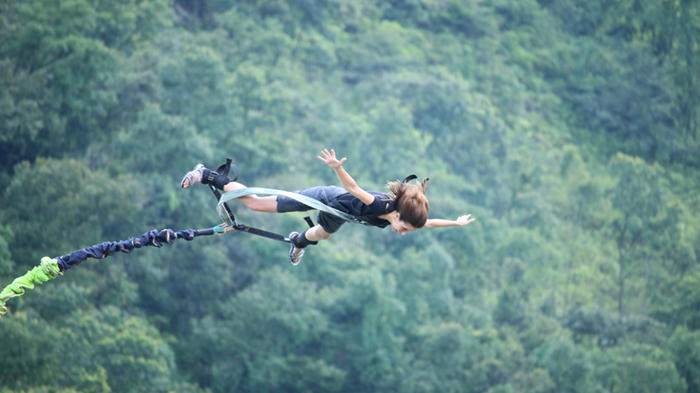 Bungee Jumping is one of the most amazing experiences of your life.

Enjoy the Helicopter Tour to EBC

If you are not into trekking, but want to enjoy the trip to Everest Base Camp, then taking a helicopter ride to there is the ultimate in Himalayan adventures. The most remarkable trip in the world, exploring the slopes of Mount Everest from a helicopter is a unique opportunity only available in Nepal. Flights run daily from Lukla, the start of the EBC trek. You have the option of landing at Kala Patthar, the best place to view Mount Everest, or at the base camp itself, where you can take photos (though you cannot see Everest from the base camp). 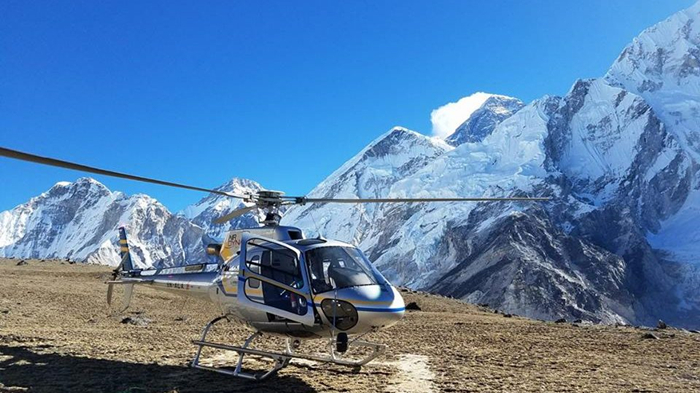 If you happen to be with enough budget yet no time for EBC trek, the half-day flight to EBC offers a viable option, even if it costs a lot more. The flight will reward you with the great views of the other high mountains, including Lhotse, Makalu, Amadablam, Nuptse, Gauri Shankar, and many more. Please do not reluctant to email your inquiry to our friendly travel consultants for free consultancy.

Climb the Mountains in Everest and Annapurna Regions

While everyone dreams of climbing Mount Everest, only a few can actually do it, as it takes months of training to be ready to make this kind of expedition. Nepal has many high mountains that you can scale, as long as you are an experienced mountaineer. For those that are experienced, the mountains around Mount Everest and Annapurna make up some of the best climbing in the world. While Mount Everest also has Mount Lhotse and Mount Nuptse to attempt, the Annapurna Massif has 16 mountains over 6,000 meters, 13 over 7,000 meters, and one that tops eight thousand. With so many mountains to choose from, where would you start?

Go for Paramotoring in Pokhara

While paragliding uses the single-wing glider to float gently on the thermal currents, traveling where the wind takes you, ”Paramotoring” uses the same glider wing, just with a small kart and motor-driven propeller to take you up into the air and explore wherever you want to go. Easier to take off and land, these karts are a great way to explore the mountains from above, and with experienced pilots at the controls, you can literally go anywhere your heart desires, and get some of the best possible aerial views of the mountains.

While there are several places where you can try out zip-lining, traveling along a long sloping wire in a harness at breakneck speeds, if zip-lining is your thing, then Nepal has the longest and most exhilarating zip-line in the world. The Zip Flyer is 1,860 meters long, and starts at an altitude of 1,625 meters in Sarangot, Pokhara. The other end, in Hemja, Pokhara, is just 960 meters above sea level, and you fly through the air at around 140 km/h. The views along the route are stunning, and include the Annapurna mountain range, Dhaulagiri range, Lamjung Himal range, and panoramic views of the beautiful Pokhara Valley.

Possibly the most elite adventure in the world, skydiving over Mount Everest is the ultimate in adventure sports, and gives you the best of high-altitude skydiving combined with the thrill of seeing Mount Everest as you rush past. Jumping as a tandem from 23,000 feet, just below the peak of Mount Everest, you freefall past the mountain and its steep slopes, to land at around 12,000 feet at Syangboche. This unique experience is only held once a year, usually around October or November, and includes a three-day trek and acclimatization. 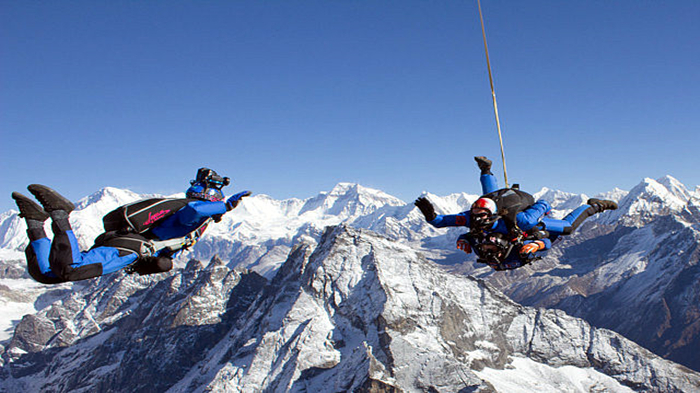 You will skydive in front of Mount Everest, the world's tallest mountain.

Ride on elephants for Jungle Safari in Chitwan

An elephant safari in the Chitwan National Park in southern Nepal is one of the best ways to get around the jungle and see some of the amazing sights of the lower Terai region of this landlocked Himalayan kingdom. It is also the best way to get to see the wildlife of the park, as the elephants can get closer to the other animals than people on foot or in jeeps. The elephant carry 3-4 people, plus the handler, and travel slowly through the jungle and plains, giving you the unique opportunity to get up-close and personal with Bengal tigers, one-horned rhinos, leopards, crocodiles, deer, antelopes, and many other amazing wild creatures.

If you are into adventures and adrenaline rushes, then there are few places that are the equal of Nepal when it comes to adventurous and exciting activities. From the high mountain peaks right down to the lowlands of the Terai region, close to the border with India, there has something awesome and exhilarating to do in every area that you travel to nepal. And when you get tired, and can’t manage any more adventure, just relax around the many peaceful and tranquil Buddhist monasteries and Hindu temples that can be found all over the country.

0 Comment ON "Adventurous Things to Do in Nepal: must-dos for adrenaline junkies"