What to See for Nepal Bhutan Tour

Touring in Bhutan and Nepal is an exciting adventure that crosses the boundaries of two ancient nations that have changed very little in the last few hundred years. Although certain modern aspects of the world have influenced many parts of the cultures, these ancient people still live in much the same ways that they always have.

Things to See and Experience in Nepal

Nepal, in contract to the strict tourist regime of Bhutan, has no such restrictions, and visitors can travel anywhere they like, and can use public transport. One of the major tourist attractions of Nepal is its border which lies along the length of the Himalayas, and which provides some of the best high-altitude trekking in the world. With treks such as the Mount Everest Base Camp Trek, the Annapurna Circuit Trek, and many others, trekking in Nepal is a huge attraction. But it is not the only attraction, and with a topography that ranges from high mountains to sub-tropical rainforest, as well as thousands of beautiful temples, monasteries, and sites, there are many things to keep you occupied when you visit.

Located on the banks of the Baghmati River, this sacred Hindu Temple is considered to be one of the most sacred temples of the Hindu faith. The temples are the holy seat of the country’s national deity, Lord Pashupatinath, and consists of a huge complex of sprawling temples. 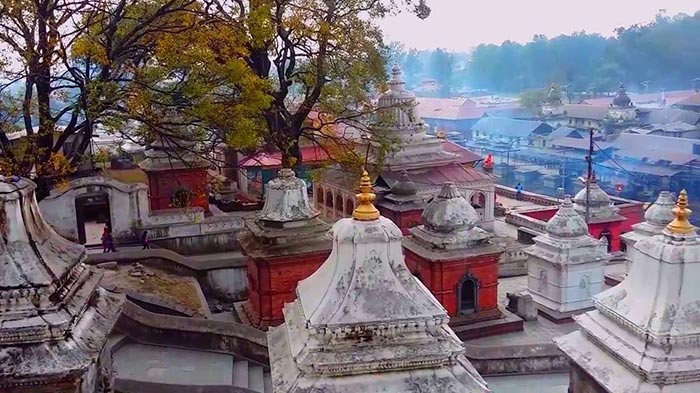 An ancient religious building set stop a hill in the Kathmandu Valley, Swayambhunath is steeped in history and mystery, and is one of the most sacred Buddhist pilgrimage sites in Nepal. The name of the sites translates to “Sublime Trees”, and was named for the many varieties of different trees that surround the temple.

A sacred place for both Buddhists and Hindus, Muktinath Valley is the location of this holy site. Lying at the foot of the Thorong La Pass in the Mustang region of Nepal, it is a traditionally Hindu site that is also revered by Buddhists as a place of the dakinis, or Sky Dancers, which are goddesses and is one of only 24 tantric sites in the world.

Also known as the Khasa, Boudhanath lies on the outskirts of Kathmandu and contains one of the largest spherical stupas in Nepal and one of the largest stupas in the world. On the ancient trade route from Tibet to India, the stupa was once a resting place for merchant to offer prayers, and is believed to contain the remains of the Kassapa Buddha. 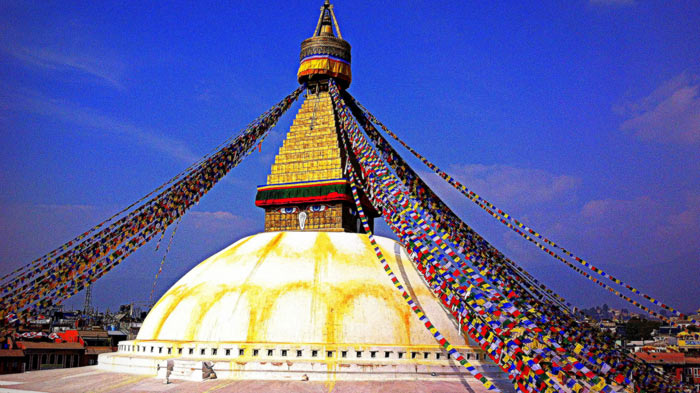 Thamel is a growing commercial area of Kathmandu that has become almost the center of the Nepali tourist industry. One of the most popular places for buying or renting hiking equipment, this network of narrow alleys and side streets is crowded with countless shops and sidewalk vendors, where you can buy almost anything from walking gear or clothing to vegetables, fruits, pastries, and even music DVDs.

One of the most protected parts of the Himalayas, Sagarmatha National Park lies in the Solukhumbu District of Nepal, and incorporates the Nepal side of Mount Everest. Directly opposite, on the Tibetan side of the border, lies the Qomolangma National Nature Preserve, and these two parks protect the area of Everest and the important bird and animal life that lives there.

The fourth national park in Nepal, Langtang lies in the Nuwakot, Rasuwa and Sindhupalchowk districts of the central Nepali Himalayas. This unique protected area contains both Indo-Malayan artifacts and sites and Palearctic ecozones that are typical only of Nepal, and which range from the heights of the Himalayan Mountains to the lowland sub-tropical rainforests. 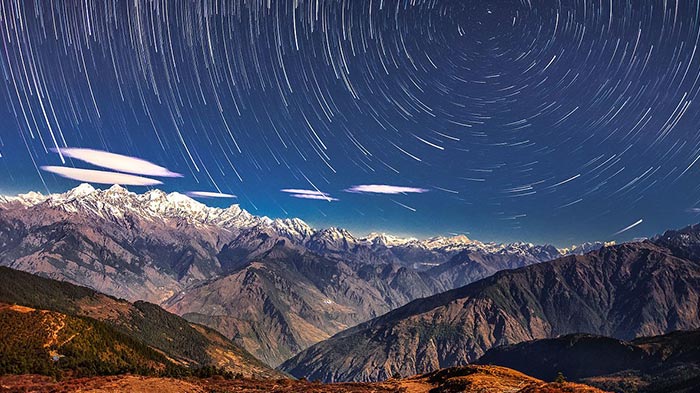 A large complex of Royal structures that date back to the Shah Dynasty and the age of the Malla Kings, Hanuman Dhoka Darbar (palace) lies in the famous Durbar Square in central Kathmandu and covers and area of five acres. It is named for the image of the Hindu monkey god, Hanuman, which sits close to the main entrance. In Nepali, “Dhoka” means “door” or “gate”.

A Tibetan Buddhist monastery close to Boudhanath, Kopan is a major site of the network of Gelugpa Dharma centers, and is a member of the Foundation for the Preservation of the Mahayana Tradition (FPMT). The monastery is famous for its teaching of Buddhism to western visitors and holds regular month-long meditation courses.

One of only three Royal Palace Squares in the Kathmandu Valley, Kathmandu Durbar Square sits in front of the old royal palace of the ancient Kathmandu Kingdom. A vivid showcase for the skills of the Newar artists and craftsmen who built the various parts of the palace square over the centuries, it is surrounded by stunning architecture and is full of hidden courtyards and temples. 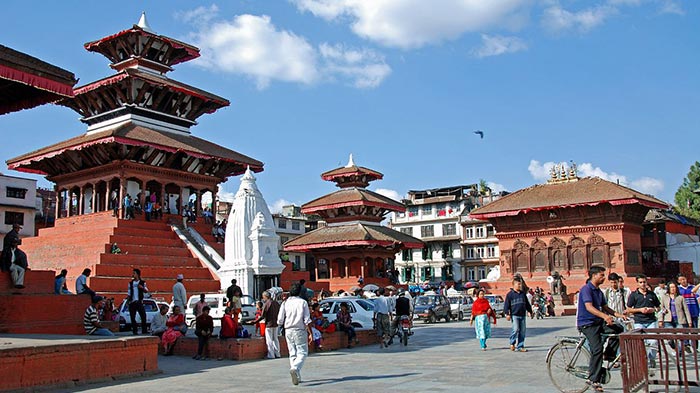 Things to See and Experience in Bhutan

Bhutan is known as the “Last Himalayan Kingdom”, and is a very secular nation, protecting its environment, culture, and national heritage as precious to its future. Bhutan has a philosophy of “Gross National Happiness”, and tourism in Bhutan is environmentally friendly and sustainable. Similar to Tibet, Bhutan does not permit individual travel inside its borders in order to better protect its natural environment, and all visitors must travel on an organized tour with a registered travel agent. A mainly Buddhist country, Bhutan has a wealth of unique monasteries and dzongs that will take your breath away.

Not only is Manas one of the most stunning national park areas in Nepal, it also contains the Project Tiger reserve, an elephant reserve, and extends over the border into Assam in India. The park is a wildlife preserve which is well known for its rare and endangered species of endemic plant and animal life, most especially the Assam roofed turtle, the hispid hare, the golden langur, and the pygmy hog. It also has a large population of wild water buffalo.

A fortress and Buddhist monastery that sits on the northern edge of the capital of Bhutan, Thimphu, Tashichho Dzong lies on the western bank of the Wang Chu River. It was the traditional seat of the head of the Bhutan civil government, the Druk Desi, and is the summer capital of the nation. 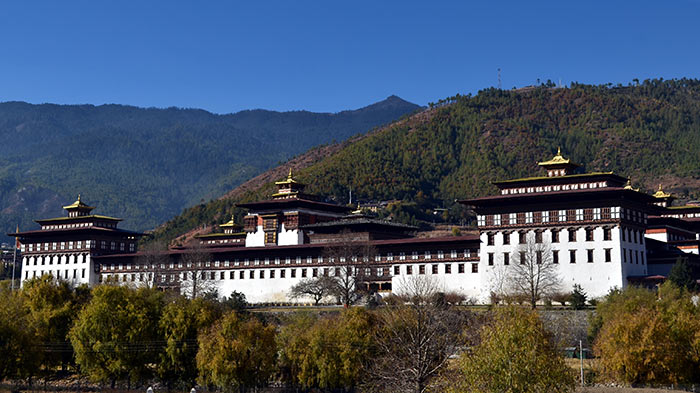 Known variously as Gangtey Gompa and Gangtey Monastery, Gangteng is the main seat of the Pema Lingpa, the head of the Nyingmapa sect of Buddhism in Bhutan. The monastery was built around the village of Gangten, which gives it its name, and lies in the stunning Phobjikha Valley, which is the winter feeding ground of Black-necked Cranes that circle the monastery three times as they arrive for the winter, and again as they leave in summer.

A large Buddhist monastery and fortress that lies in the Paro Valley, Rinpung is part of the Drukpa Lineage of the Kagyu school of Buddhism. Home to the District Monastic Body and the administrative offices of the Paro Dzongkhag, it is one of the sites listed in the ‘tentative list’ of UNESCO sites in Bhutan.

A cultural museum that lies in the town of Paro in western Bhutan, the museum is the ancient Ta-dzong building that was restored to its former glory. Once the protective fortress of the Paro Dzong, the museum houses, some of the finest specimens of Bhutanese art in the world, which cover more than 1,500 years of Bhutanese history and cultural heritage. 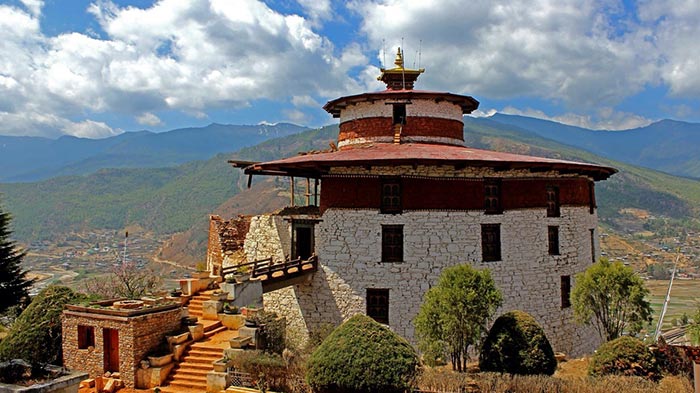 Once a fortress and Buddhist Monastery, Drukgyal Dzong now lies in ruins in the upper part of the Paro District of Bhutan. The dzong was built in 1649 to commemorate the victory of the Bhutanese people over the Tibetan and Mongolian invasion. Surviving for more than 300 years, the dzong was destroyed by fire in the early 1950s. The dzong is now set t be rebuilt after an announcement in 2016 from the Bhutanese Prime Minister, Lyonchen Tshering Tobgay.

Located in the Motithang District of Thimphu, this wildlife reserve is specially set up to cater for the national animal of Bhutan, the Takin. Formerly the site of a zoo that was closed by the King of Bhutan, the Takin refused to leave the area after being set free into the forests. The Takin is listed as a protected species of goat-antelope that is endemic to Bhutan.

The Phelchey Toenkhyim, or Folk heritage Museum in Thimphu is a traditional 19th century mud and timber house that is more than 150 years old. This amazing cultural and historic site includes its own rice, millet, and wheat fields, a watermill, vegetable gardens beside the kitchen area, and a hot-stone bath building. A perfect example of how the Bhutanese people lived at the time, the building has a barn on the ground floor, a storage on the second floor, and its living area on the third floor. 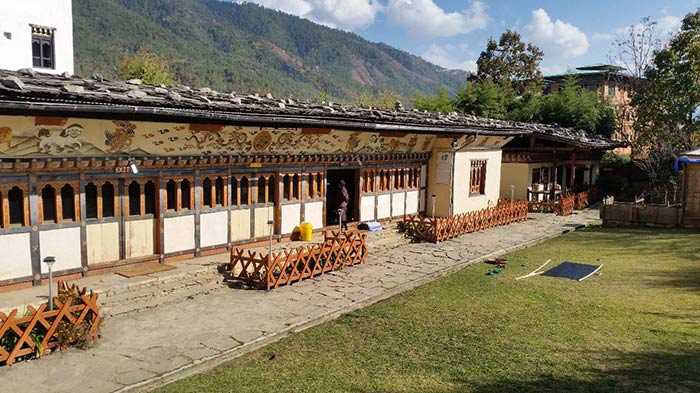 The site of one of the largest statues of the Sakyamuni Buddha in the world, the Great Buddha Dordenma lies in the mountains of northern Bhutan and hoses over one hundred thousand smaller statues from throughout Bhutanese history. Situated on the site of the ruined palace of Sherab Wangchuck, the 13th Desi Druk, at Kuensel Phodrang, the statue stands 52 meters tall and is made of gilded bronze.

If you are planning to enjoy a trip to Tibet Nepal Bhutan, yet have no ideas of how to sort it out the details, no worries! We would like to hear your tour plan and offer free professional consultancy and viable solutions. Please feel free to contact us.

0 Comment ON "What to See for Nepal Bhutan Tour"