How Many Days to Take for a Classic Nepal Bhutan Tour

Combining two beautiful kingdoms in one itinerary takes you from the serene to the spiritual with a tour that encompasses the best of Nepal and Bhutan. You can experience the rich cultural heritages and histories of these two unique countries, from the brightly-colored prayer flags of Nepal to the elaborate and traditional national costumes of Bhutan. So usually how many days you should have to enjoy a lifetime Nepal Bhutan tour?

How Many Days in Nepal?

Your stay in Nepal normally depends on what you want to see and do while you are there. As majority of the treks take more than 10 days, trekking while on a tour to Nepal and Bhutan is not possible, unless you intend to spend several weeks in Nepal before moving to Bhutan. However, Nepal has plenty of other sights and experiences that will thrill and delight you, and it is best not to pack too much into one tour. Rushing through a country in a hurry can often mean you miss the best of the culture and people.

On average, to visit the main sites of Nepal, at least five days is needed. Anything less, and you will not be able to make the trip worthwhile, although a few more days would mean you could include more sights and experience more of the culture of Nepal. As with anywhere you travel to, the first day will always be there to settle into your hotel, to unpack and rest before the adventure truly begins, though if you are early in the day, some sightseeing around the city is always possible.

A tour of Nepal should include the major sights that you will want to see, and the first of these has to be Swayambhunath, on the western outskirts of the city. Thought to be more than 25 centuries old, the temple at Swayambhunath is one of the oldest Buddhist shrines in the world. This sacred shrine is worshipped at by Buddhists that travel from around the world. 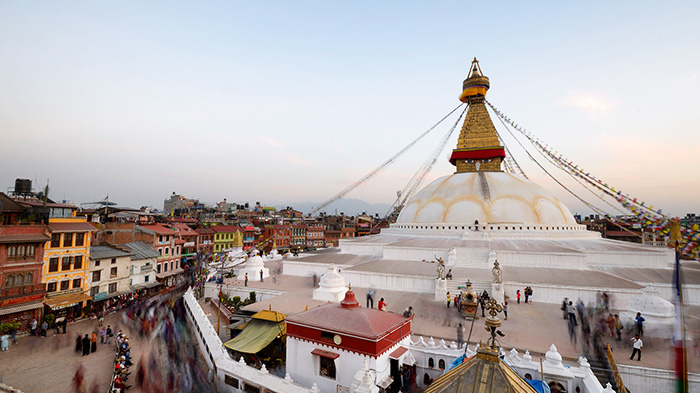 Swayambhunath, one of the oldest Buddhist shrines in the world.

From here, it is a short drive across to the eastern outskirts to the temple of Pashupatinath, where the Hindus cremate their dead on the riverbank, and then on to the exotic Buddhist Tibetan community of Boudhanath. Inside Boudhanath, you can visit the preserved old city of Bhaktapur, which gives you an intense feeling of what it was like to live in ancient Nepal, and at the old bazaar town of Bandipur, you can find some of the most amazing boutique hotels, or stay in a local, Nepalese lodge as part of the family.

The beautiful, lakeside city of Pokhara requires at least one full day to visit. A six hour drive from Kathmandu, you will need to leave early, but the visit to the city is worth it. Lying under the snowy white peaks of the Annapurna Mountain Range, Pokhara is a site where you can combine adventure with relaxation. Take a paragliding trip up into the clouds, meditate with monks, or just relax by the lakeside with a nice refreshing iced tea. You can also stay the night in Pokhara to give you more time in the city.

From Pokhara, it is a five hour drive south to the amazing Chitwan National Park, which is the favored site for seeing the amazing Bengal Tiger. Almost on the edge of the border with India, Chitwan is a place of dense jungle, and is the natural habitat of the tigers, as well as rhinos, monkeys, deer, crocodiles, and more species of birds that you can count. A day trip to Chitwan will leave you dying to come back for another look at these exotic and endangered animals. 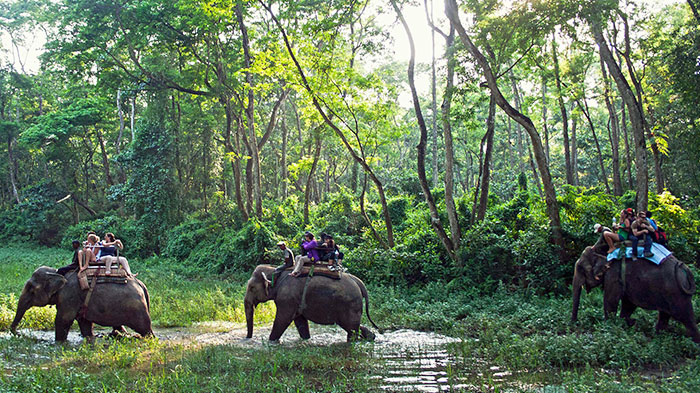 Then it is back to Kathmandu for the night, for the last day of the tour before leaving for Bhutan. Kathmandu is a great city to tour the sights, but since it is the place you need to be before transferring to Bhutan, it is best done last, before you fly. Kathmandu has many spectacular sights, and to see them all would take several days. The Durbar Royal Square in Kathmandu is one of the most amazing places to see, and the square includes the ancient Royal Palace, several Hindu temples, and some of Nepal’s most astounding architecture.

Then it is out to Thamel, one of the most prolific shopping centers in Kathmandu. Here you will find all the shops that buy and sell hiking and mountaineering gear for treks to Mount Everest Base Camp. But more importantly, you can find some of the most amazing shops selling all kinds of clothes and accessories, as well as ornaments and souvenirs that are hand crafted by the Nepalese craftsmen, and which make perfect souvenirs to take home.

How Many Days in Bhutan?

Bhutan is a country of mystery and mysticism, which is packed with amazing dzongs, temples, and sacred sites, as well as tourist attractions that will amaze you. Many of the attractions you can see tell the unique history of this ancient kingdom, and show you more about the culture and people of Bhutan. Once a secluded country that separated itself from the rest of the world, Bhutan is now a hot tourist spot, and they focus their tourism on high value, low volume.

To tour Bhutan, you will need to arrange your entire tour with a travel agent, who will help you decide on your itinerary, book your trip, arrange your visa and permits, and provide a tour guide, private vehicle, and driver for the entire trip. Tourists to Bhutan are not permitted to travel unaccompanied, so the guide will be there to help you understand this beautiful nation better.

With so much to see in Bhutan, an ideal tour of the country would be for the whole thirty days of your visa, which might just be enough time to visit around two thirds of the country’s amazing sights and attractions. However, to make the most of the best sights and experiences in Bhutan, at least five days is needed.

On arrival at Paro International airport, you will be met by your guide, who will transfer you to your hotel. The flight takes just over an hour, so a morning flight from Kathmandu to Bhutan will leave you with an entire day to get started in the kingdom. Paro is an amazing city, and you can experience a visit to the Paro Rinpung Dzong, also known as the “Fort of the Heap of Jewels”. The dzong houses the administrative offices of the monastic body in Paro and was first built in the 15th century. You can also take a trip to visit the Kyichu Lhakhang, one of the oldest temples in Bhutan, which was built under the orders of the Tibetan King Songtsen Gampo, in 638AD. 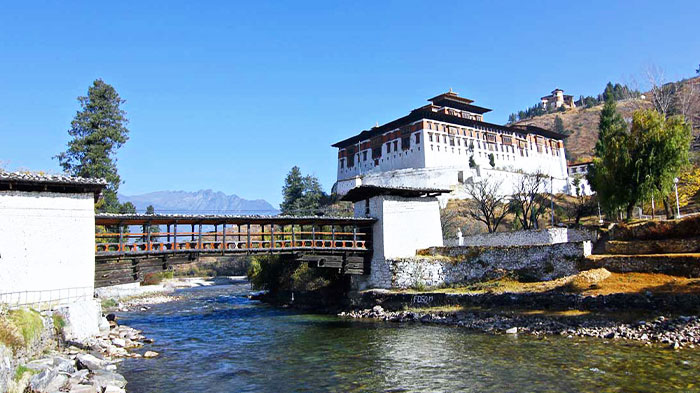 From Paro it is off to Thimphu, the modern capital of Bhutan. One of the fastest growing cities in the world, Thimphu is located in a narrow valley where there is little room to expand, yet it is expanding. Now a very modern city, it still retains the ancient buildings and traditional architecture of its history, and continues to follow the ancient traditions of the people.

Also in Thimphu, you can find the stunning Memorial Chorten, built in memory of the third Bhutanese King, and the huge variety of handicraft emporiums that can be found in the city. Thimphu boasts some of the finest handmade paper in the world, and you can also find makers of fine Bhutanese textiles that are now exported internationally. 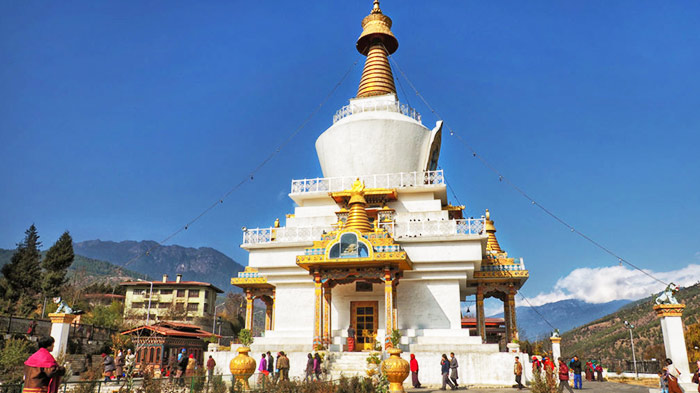 Punakha is just a 2.5-hour drive from Thimphu, and you can get an incredible view of the Bhutanese Himalayas on the route to the city as you head over the stunning Docho-la Pass. Once over the pass, the landscape changes and you drive through forests of Blue Pine and rhododendrons before reaching Punakha. The dzong at Punakha was built by the first Zhabdrung Rinpoche, the spiritual leaders of Bhutan, and is the second largest and second oldest dzong in the country. Punakha was also the country’s capital for almost 300 years, until it was moved to Thimphu in 1907.

From Punakha, it is then on to Wangdue Phodrang, a small town to the south of Punakha. The upper reaches of the Wangdue Phodrang Valley are some of the richest pastureland in the Himalayan regions, and the valley is renowned for its stone carving and bamboo crafts. The Wangdue Phodrang Dzong sits on the hill overlooking the town, but is only open during the tsechu in autumn.

In the afternoon, visit the beautiful, lone temple of Chimi Lhakhang, which stands on a small hill that overlooks the Puna Tshangchu River. The holy site of the Buddhist lama, Drukpa Kuenley, who was also known as the “Divine Madman”, the temples is a sacred site to Bhutanese Buddhists, who come to the temple to pray for their children. It is believed that prayers made there can help protect your children or help you to become fertile enough to have children. 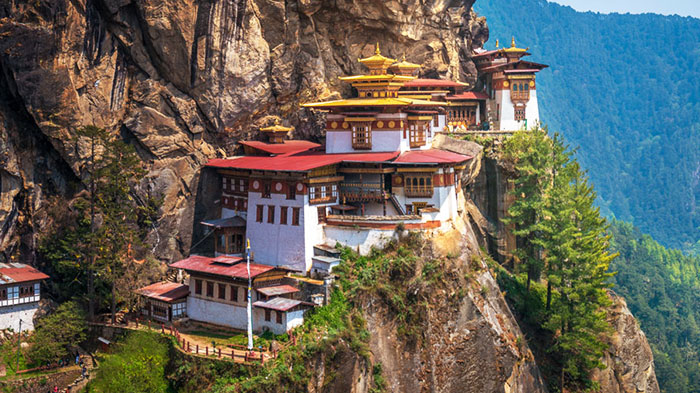 Once back in Paro, you will get the chance to take a trip out of the city to one of the most spectacular monasteries in the world, the Taktsang Monastery. Sitting on a narrow ledge around 800 meters above the Paro Valley, the Taktsang Monastery, also known as the Tiger’s Nest Monastery, is a unique site. Considered to be one of the most sacred sites in Bhutan, it is the site of meditation of the great Guru Rinpoche, the Second Buddha, when he came to Bhutan. It is believed that, in the 8th century, he spent three years, three months, three weeks, three days, and three hours meditating in the caves behind where the monastery now stands. The monastery was built around the cave in 1692 and has become a cultural icon in Bhutan.

Traveling from Nepal to Bhutan is relatively easy and quick, as long as you have your visa approval from the travel agent in Bhutan. Flights to Bhutan leave Tribhuvan International Airport in Kathmandu four times a day, and take around an hour and a half to get to Paro International Airport in Bhutan, the nation’s only international airport. Bhutan has two airlines, Druk Air and Bhutan Airlines, which are the only commercial airlines that are permitted to land at Paro.

All in all, the optimum time for a Nepal and Bhutan tour is around ten days, although a longer tour would mean that you would be able to spend more time in these beautiful countries, and explore more of the sites, culture, and the amazing people.