Indra Jatra, also known as Yenya, is the largest street festival in Nepal. It takes place in Nepali Bhadra month (August to September in Solar Calendar) and lasts for eight days. Following Gai Jatra, Indra Jatra festival is celebrated by Nepalese to pray to Indra and Dagini for a good harvest and commemorate the deceased in the past year. On the last day, the flagpole erected at Kathmandu Durbar Square will be burned down, which signifies the end of Indra Jatra festival. 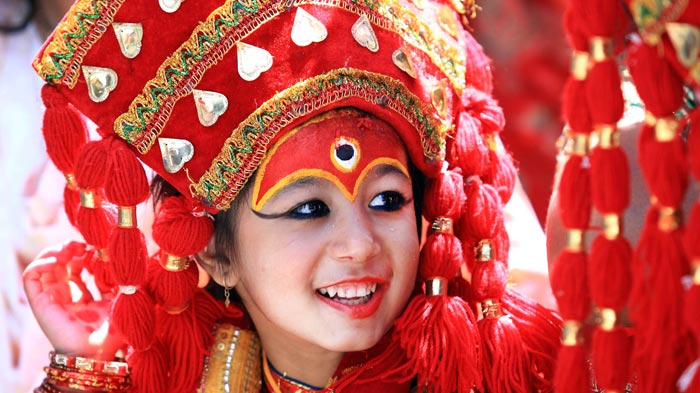 During Nepal Kumari Festival, you can get a closer look at the living goddess Kumari.

According to legend, Indra, the god of rain, once descended to Kathmandu valley to steal a certain flower for his mother, Dagini. Since nobody knew his identity, Indra was imprisoned like a common thief. The elephant searched through the streets and alleys of Kathmandu but failed to find his master. Indra's mother was so worried and came down to earth. After revealing themselves to the masses, the captor gladly released Indra. In return, Dagini promised to do two things. One is to take those who have died in the last year back to heaven. The other is to spread enough dew throughout the winter to ensure a good harvest. This is the reason why Indra Jatra is celebrated at Kathmandu, Nepal.

Actually, Yenya Festival consists of two parts, namely Indra Jatra and Kumari Jatra. The celebrations of Indra Jatra include the flagpole ceremony, blood sacrifice, displays of Bhairava's masks, etc. During Kumari Jatra, the living goddess will take the chariot to march through the streets of Kathmandu. And Nepalese carry out the traditional masked dances.

Opening ceremony of Indra Jatra
At the beginning of Yenya, people would hold a solemn ceremony for erecting a flagpole. This carefully-selected pole is about ten meters long and finally set up outside the Hanuman Dhoka in Kathmandu. At the same time, there will be a grand dance ceremony. A series of legends about Indra and the captured scenes will be reenacted through those gorgeous dances. In many temples of Kathmandu valley, buffaloes, goats, roosters, fishes, nuts and other tributes are worshiped to the gods and goddesses. At the end of Indra rituals, those offerings will be distributed to the crowds. 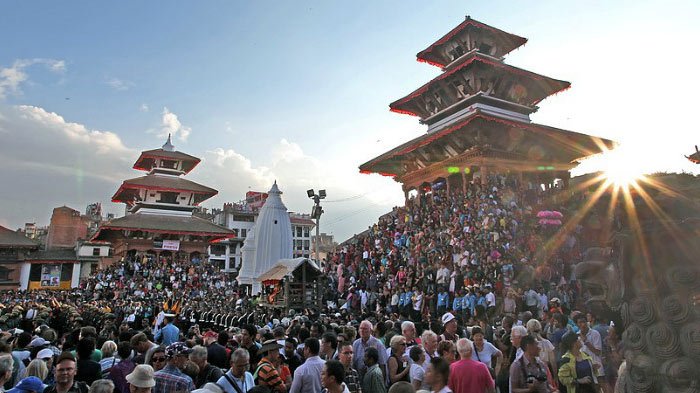 People are waiting for the erection of Indra pole outside the Hanuman Dhoka in Kathmandu.

Exhibitions of Bhairava's masks
After erecting the ceremonial pole at Hanuman Dhoka, people would open the screened door of white Bhairava. His horrible face will be displayed in front of Kumari's chariot procession. This grand exhibition takes place only once a year and lasts for three days. You must be amazed at the huge crystal on the masks. In addition to the official displays of Bhairava at Durbar Square, the masks of Bhairava made by the local residents are also packed along the streets and alleys of Kathmandu. It signifies that wherever Goddess Kumari goes, she will be always under the protection of God Bhairava. 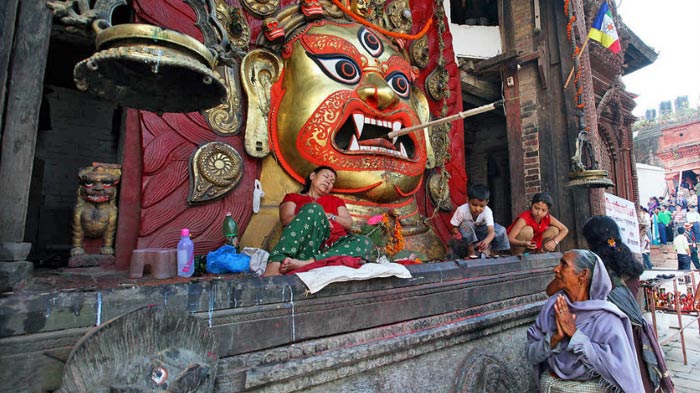 A sincere devotee is praying in front of Bhairava.

When passing by the white Bhairava mask, the living goddess Kumari has to stop to greet him. After paying respect to Bhairava, the music sounds all over the whole Kathmandu Valley. Hence beer starts to pour from Bharirava's mouth. Nepalese believe that getting a sip of this beer will bring them good luck. And a small goldfish would be put to swim in the beer in advance. The person who gets the fish must be the most fortunate one for it'll bring him good luck for the whole year. 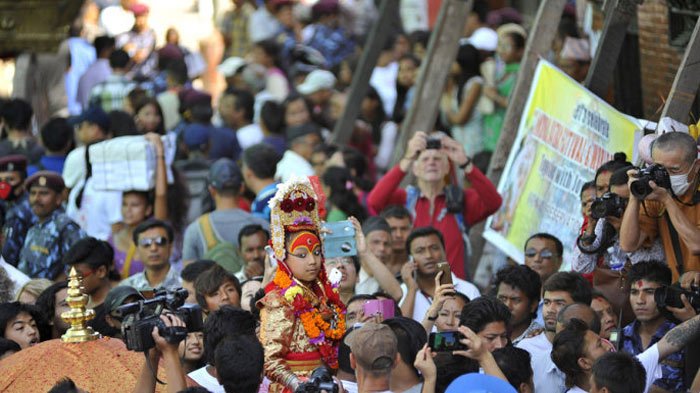 The living goddess Kumari stoped to greet the image of Bhairava.

Kumari chariot procession
One of the most popular celebrations for Yenya Festival is Kumari's chariot procession. One day before the grand parade, three golden temple chariots are assembled outside the Kumari Temple. And the whole procession lasts for three days. At that time, people dress in their festive costumes, gather at Durbar Square and wait for the coming of the living goddess. 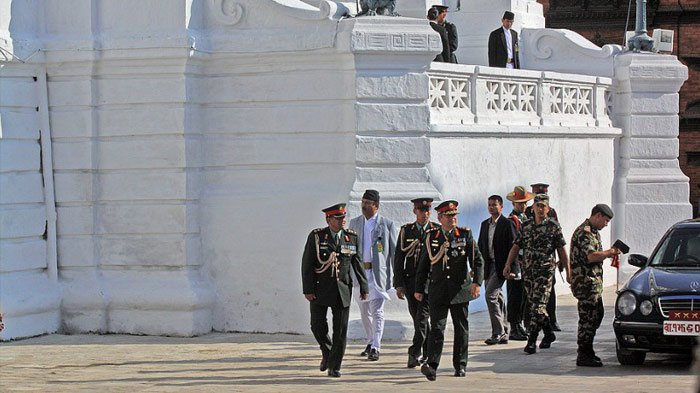 Nepalese officials are heading to Gaddhi Baithak for the ceremonial parade.

Before the arrival of the living goddess Kumari, Nepalese officials and consular staff gather at Gaddhi Baithak in front of Durbar Square to observe the impressive military parade. After the ceremonial parade comes Kumari's chariot procession. At the beginning, two boys come out from the home of Kumari, symbolizing the human representation of the deities of Ganesh and Bhairava. Then they will be carried in the chariots separately as the attendants of the goddess. 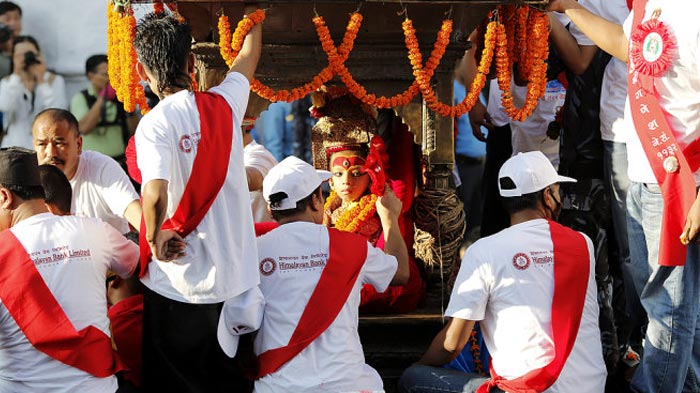 The whole kathmandu valley is packed with cheerful locals and visitors.

Finally, the living Kumari is carried by the entourage to board on the last chariot so that her feet won't touch the ground. Some attendants also sit on the chariots to protect those deities and scatter the flowers to the cheerful crowds. Therefore, you'll see each chariot pulled forward by more than ten individuals. 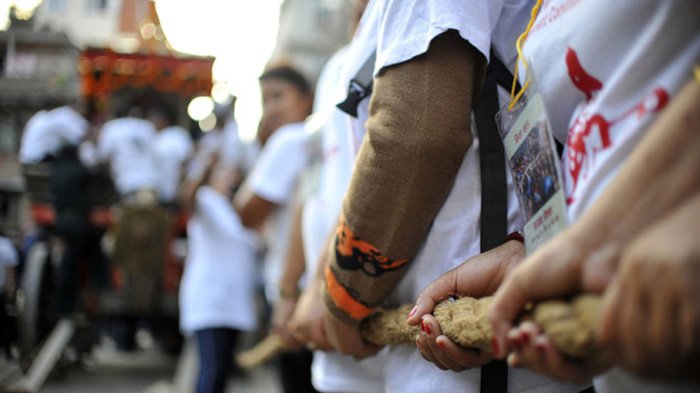 Kumari's chariot is pulled forward by a dozen of Nepalese.

The beautiful chariots move off slowly and the president would pay homage to the goddess of Kumari on the balcony of the old palace. Then the parading procession leave Durbar Square to Hanuman Dhoka where the living goddess greets the image of Bhairava. While Kumari marches around Kathmandu city, people will act out the story of Indra in route.

Mata Biye of Kumari Jatra
Mata Biye means butter lamps. On the first day of Kumari Jatra, the family gather together and offer butter lamps to their dead relatives. The parade begins at 18:00 pm and people would march all the way throughout the ancient Kathmandu city to cherish the memory of their loved ones. 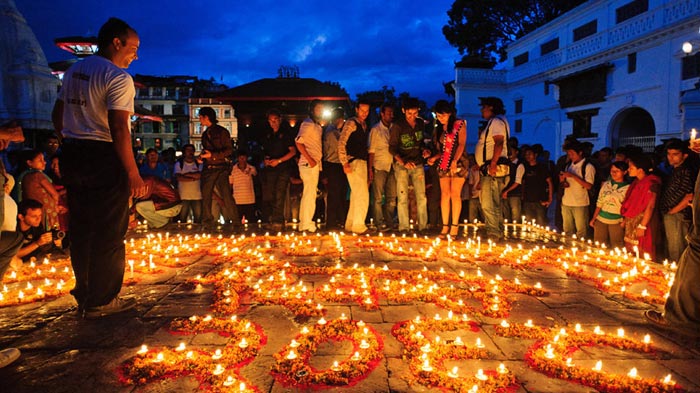 Nepalese are lighting butter lamps for their relatives at Kathmandu Durbar Square.

Indra Jatra is one of the most recommended festivals in Nepal. On this day, Kathmandu Durbar Square will be free for all the visitors. It's also the golden chance for you to take great shot of the living goddess Kumari. The spectacular celebrations and chariot procession are worth your coming. Please feel free to contact us to tail your own Nepal trip.