Top Festivals and Holidays in Nepal and Bhutan

Festivals and holidays in Bhutan and Nepal are normally based around the religious and cultural events of the Hindu and Buddhist calendars, and are important events for the people of both countries. In Nepal, a majorly Hindu country, the diverse ethnic groups mean that the celebrations have variety and are fascinating to see. With hundreds of festivals throughout the year across Nepal, there is almost a festival every week, so there is always something to see. In Bhutan, a mainly Buddhist country, the festivals are similar to those of Tibet, and Tibetan Buddhism is the national religion of this last Himalayan kingdom. The holidays and festivals are based in the Buddhist calendar, and mostly occur across the country, with the exception of a few regional festivals. Known as “Tsechu”, these festivals are based on ancient rituals, some of which include the old animistic and shamanistic elements from before Buddhism came to the kingdom.

Best Festivals and Holidays in Nepal 2021

Taking place in early March, Holi, also known as the Festival of Colors, is based on the victory of a Hindu goddess over the female demon, Holika. The festivities last for around a week, and are a time when the people eat, drink, and rejoice in the streets to welcome the warmer weather of spring. The people celebrate on the streets by covering themselves with colored powders, and throwing them on passers-by, so if you are there at the time of Holi, be prepared to be covered in colors. 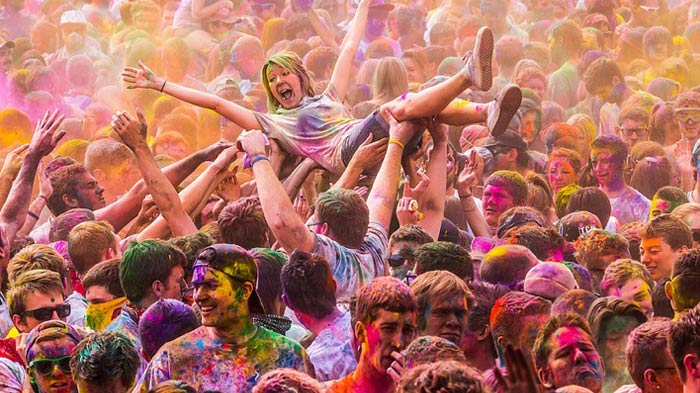 Locals are celebrating Holi in Nepal.

One of the most important holidays in the Nepali Bikram Sambat calendar, Bisket Jatra, or the Nepali New Year, is a celebration thatis observed in most parts of Nepal, but is mostly concentrated in ancient Newar city of Bhaktapur, in the eastern end of the Kathmandu Valley. Located around 15 kilometers from the capital, the celebrations begin in the Bhaktapur Durbar Square, and the games are held between the upper and lower areas of the city, including a giant tug-of-war. The celebrations also include a chariot war between effigies of female and male deities, ritual tongue piercings, the giving of gifts, and offerings to dead mothers in the Mata Tirtha. 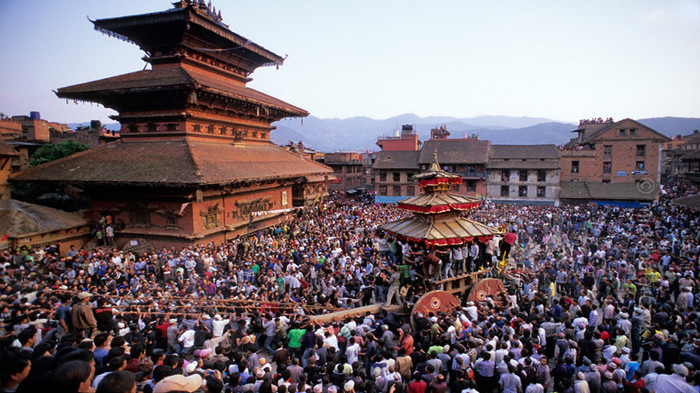 New Year is celebrated by the Nepali people in ancient Newar city of Bhaktapur.

A major festival of women in Nepal, Teej is the most famous festival for Nepali women, and the streets of Kathmandu are filled with women in red national costumes. The festival celebrates happy marriages, prosperity, and family values, and women visit the temples to pray for the health and wellness of their husbands and children, as well as to purify their own souls. The most visited temple is Pashupatinath, the temple dedicated to Lord Shiva, and the women are all dressed in red saris, the color traditionally worn by brides in Nepal. The day is one of fasting for women, in honor of the wife of Shiva, Parvati, who fasted through 108 incarnations before being able to be with her husband again. 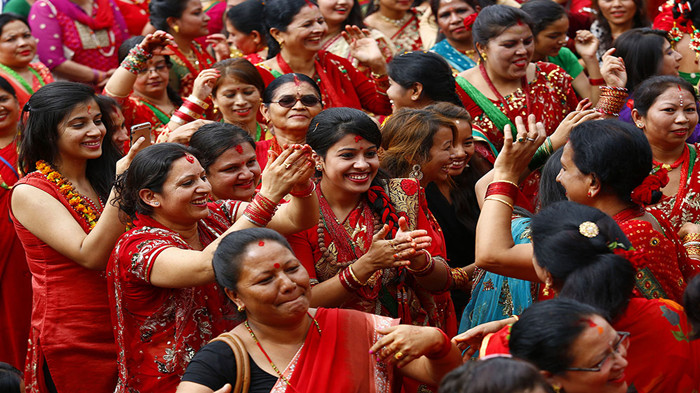 Teej is a festival celebrated by women all over Nepal.

Dashain is Nepal’s most important festival in the year, and is celebrated across the country for around two weeks. The festival celebrates and honors the victory of the gods over the huge host of demons, and is based on the tales of the Ramayana, who invoked the power of the goddess, Durga. People visit the mother goddess temples across the country to make offerings, and perform tantric rituals in their homes every day of the two-week event.

The Nepali version of the Hindu Festival of Lights, Tihar is dedicated to Lakshmi, the goddess of wealth, and is one of the most striking of the Nepali festivals. Taking place over five days in October, Nepali homes are filled with lighted oil lamps, day and night for the entire celebration. On the second day, which is known as “dog’s day”, every canine in the country is adorned with floral garlands, and given a delicious feast and special worship for their protection of the family home. On the third day, the same treatment is given to the family cow, the representative of wealth in Nepali Hinduism.

Best Festivals and Holidays in Bhutan 2021

The Punakha Drubchen is one of the most terrific festivals in Bhutan, and celebrates the triumph of the Bhutanese people over the attacking Tibetan forces in the 17th century. Held across the Punakha Dzongkhag every year, this unique victory celebration starts with a re-enactment of the original battle, where the lay people of the region drove back the massive Tibetan forces. The re-enactment is done by the local militia, wearing the ancient costumes of the region in that period of history, and shows how the battle was fought by local men and women, as Bhutan had no military force at the time. 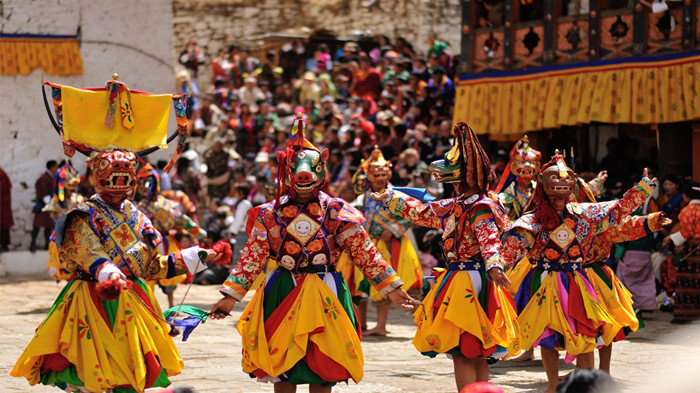 The Drubchen is followed by the Punakha Tsechu, which was brought into being in 2005, to celebrate the honorable deeds of the Zhabdrung Rinpoche, Ngawang Namgyal, who was instrumental in defeating the Tibetan forces. The festival begins with the spreading of a huge tapestry of the Guru Thongdrol, and the mere sight of the tapestry is said to cleanse the sins of the onlooker. The festival continues with masked dances performed by priests, the unfurling of other huge thangkas, and other celebrations.

Held for around five days in the 2nd lunar month of the Bhutanese calendar, which is from the 4th to the 8th of April in 2021, the Paro Tsechu (Tsechu) is the most popular religious dance festival in Bhutan, and has been held since the 17th century, following the consecration of the Paro Dzong by Paro Tshechu by Zhabdrung Ngawang Namgyel and Ponpo Rigzin Byingpo in 1644. The tsachu in Paro is one of the best opportunities to witness first-hand the rich religious culture of Bhutan, and it is believed that attending the festival gains merit for the Buddhist devotee. 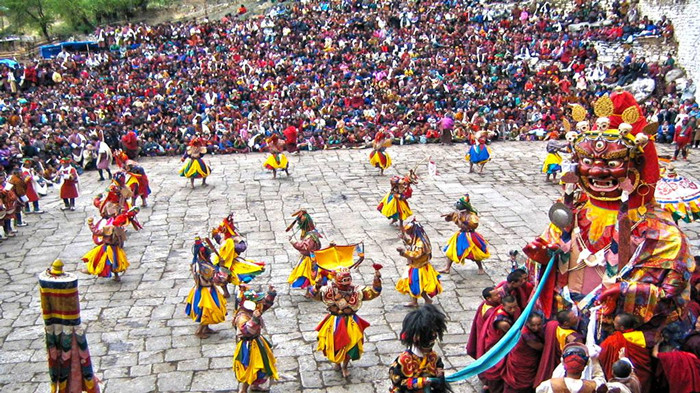 Paro Tsechu is one of the most popular festivals in Bhutan.

Held in Wangdue Phodrang Dzongkhag, this unique tsachu is held to celebrate the life and great deeds of Guru Rinpoche, also known as Padmasambhava, who brought Buddhism to the kingdom. Held at the harvest time each year, which can be different dates depending on the harvest, attending the festival is imperative for devout Buddhists for their spiritual dedication. 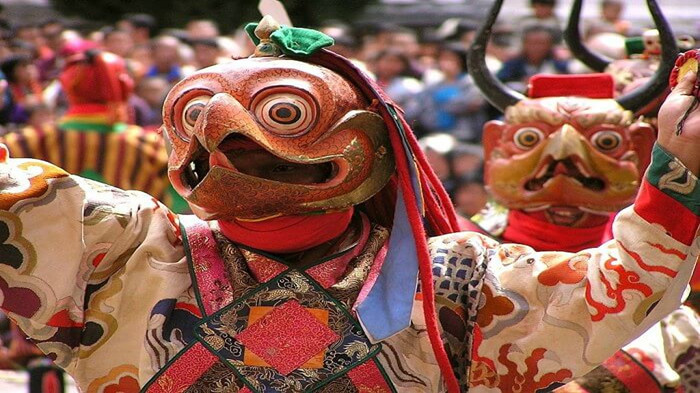 Wangdue Phodrang Tshechu Festival is held to celebrate the life and great deeds of Guru Rinpoche in Bhutan.

One of the largest of all the tsechus in Bhutan, this three-day festival begins on the 19th day of the eighth month, and features the costume dances of the Black Hats, as well as mask dances by the monks of Thimphu Dzong. The prayers, rituals and celebrations last for three days, and end with the displaying of a giant thangka painting of Padmasambhava.

Well known in Bhutan for the sacred naked dances, the Jambay Lhakhang Drup Tsechu is held for three days in November, and commemorates the consecration of the Jambay Lhakhang temple in the 7th century. Held to also honor Guru Rinpoche, the celebrations also feature mask dances as well as the sacred Ter Cham and Mewang, the naked mask dances held by men in the courtyard of the temple at midnight, to bless infertile women to be able to bear children. The Ter Cham and Mewang dances are not open to tourists.

In Phobjika Village in Wangdue Phodrang Dzongkhag, around the Gangtey monastery, every November the black-necked cranes of Tibet come circling around the monastery as they come in to land for their winter feeding, escaping the desolate cold of northern Tibet. Aimed at the conservation of these rare birds as much as for the celebration of their return to their winter feeding grounds, which is an auspicious event, the birds are welcomed with costumed mask dances that represent the cranes’ long flight from northern Tibet and Qinghai Province of China. The most striking thing about the return of the birds is the way they circle Gangtey Monastery three times before landing. The same ritual, circling the monastery three times, also occurs in the spring, when they leave to head back to their summer feeding grounds. 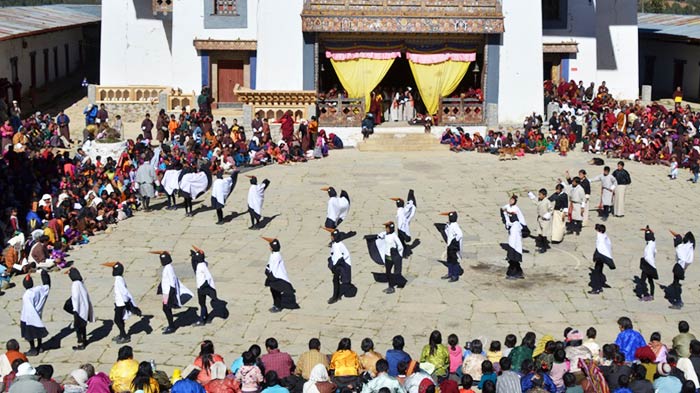 Whether it is Bhutan or Nepal, these ancient cultures have certain taboos in place, and for anyone touring Nepal and Bhutan, it is essential to know what they are, to avoid embarrassment and offending the local people. Respect for the local cultures in important, and you should treat both the people and the land with care and respect.

• To show gratitude and respect, use both of your hands rather than one when giving or receiving something, as this is seen as a mark of respect.
• Do not to point with a single finger; use a flat extended hand, especially when indicating a sacred object or place.
• Avoid touching women and holy men. In Nepal, people do not normally shake hands when they greet one another. Instead, they press their palms together in a prayer-like gesture, known as “Namaste”.
• Do not eat with your left hand. It is considered an uncivilized act to use the left hand for eating.
• People in rural Nepal are not used to western dress, so you must be careful not to wear anything provocative or sexually enticing.Women should wear full, long-sleeved dresses, and avoid showing too much bare skin. Short skirts and shorts should not be used.

• Ask permission before taking photographs of people, events, or objects, as this can be considered rude, and many Buddhists believe that the photo holds a piece of the soul, preventing reincarnation. And do not take photos inside religious buildings.
• Do not climb on religious statues, touch religious artifacts, or attempt to purchase items of religious significance.
• Take off your hat when entering a Dzong or Bhutanese home, and remember to avoid showing bare skin in the temples and monasteries in Bhutan. Shorts and half pants, as well as sleeveless tops, are not permitted in the temples and Dzongs.
• Always walk around religious sites in a clockwise direction, and do not step over any religious offerings, such as clothes, books, or other materials that have been left out in the open at religious sites.

0 Comment ON "Top Festivals and Holidays in Nepal and Bhutan"