Two Weeks in Nepal and Bhutan: how to plan a Nepal Bhutan tour for 14 days?

Lying close together in the Himalayas, Nepal and Bhutan are two of the most spectacular countries in Asia, with the mighty Himalayas running along the northern borders of both countries. Popular with tourists from around the world, these two Himalayan nations share a common attraction; both are popular trekking destinations in Asia. Yet, while they can both offer amazing treks and have a similar climate, the style of trekking in each country is as different as the cultures and religions. To make the most out of these two amazing Himalayan countries, you need at least 14 days to cover both destinations to get the best from each country’s attractions.

What is the classic Nepal Bhutan tour itinerary?

One of our most popular tours that combine Nepal and Bhutan, the classic 14 Days Cultural Nepal and Bhutan Tour, which includes a visit to the legendary Birthplace of Buddha at Lumbini in Nepal, is the ideal way to cover both Nepal and Bhutan in one go. A stunning mix of cultural experiences, jungle safaris, light trekking, and visits to the most spiritual centers of each country, this unique touring experience is one that will give you the best of both destinations.

Your tour starts in Nepal with a sightseeing experience in the Nepali capital of Kathmandu. The tour of this exotic capital includes visits to the Kathmandu Royal Durbar Square, the Patan Durbar Square, and the stunning Swayambhunath Stupa, known locally as the “monkey temple”. Then you will travel out into the Kathmandu Valley, visiting the Hindu Pashupatinath Temple, the huge Buddhist Stupa of Boudhanath, and the fascinating Bhaktapur Durbar Square, as you take the ride to Nagarkot and on to Chitwan.

Located in the southwest of Nepal, close to the border with India, Chitwan is the location of the Chitwan National Park, the first and largest national park in Nepal, which is famous for its wildlife. There you will get to take an elephant safari to experience the stunning wildlife of the area, including leopards, rhinos, crocodiles, monkeys, and the famous Bengal tiger. You can also take jungle walks to study the flora of the area, as well as canoeing along the rivers in Chitwan. 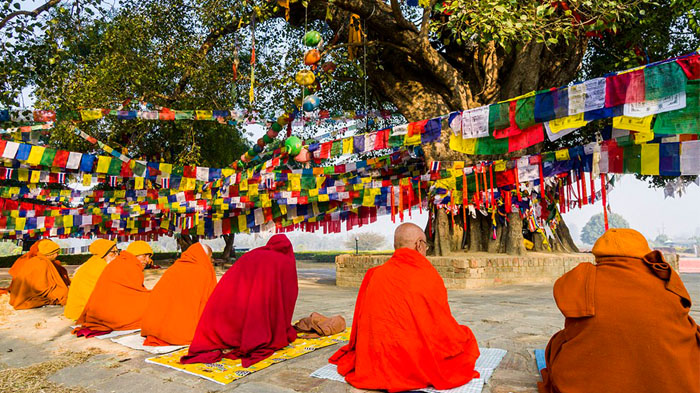 Exploring the Buddhist culture and mysterious religions in Lumbini, Nepal.

Then it is on to the most sacred location in the world for Buddhists - Lumbini. Known globally as the birthplace of Siddhartha Gautama, the Buddha, the gardens and monasteries are some of the most beautiful in Asia. Then you will travel to Pokhara, one of the most popular areas for trekking in Nepal, where you can take a boat ride on the stunning Phewa Lake, view the close peaks of the Annapurna Range, and tour around the city, exploring the delights of the attractions and markets. From Pokhara, you will then tour back to Kathmandu, ready for the flight to Bhutan’s Paro International Airport.

Once in Bhutan, you will be met by your tour guide at the airport, who will transfer you to your hotel on Paro. Here, you will get to explore the city and valley, including the oldest temple in Bhutan, the Kyichu Lhakhang, the 17th-century Rinpung Dzong, and the stunning scenery of the Paro Valley. Then it is on to the Bhutanese capital of Thimphu, around 2 hours from Paro. Possibly the only capital city in the world that has no high-rise buildings or skyscrapers, Thimphu is well known for its picturesque monasteries, the clean fresh air, and the unique and friendly locals. Your tour of the city will begin with the Memorial Chortens of the late king of Bhutan, and continue to take you to the National Library, Folk Heritage Museum and Hand-made Paper Factory, the School of Arts and Crafts, and the most beautiful Dzong in Bhutan, the Tashichho Dzong.

Then you will drive to the northeast of Thimphu, to the Punakha Dzongkhag (District), passing over the famous Dochula Pass, at 3,100 meters, where you get an unobstructed view of the Himalayas to the north. In Punakha, renowned for its stunning treks, you will get to tour around the Punakha Dzong, and explore the city before heading back to Paro.

In Paro, you will get to visit the National Museum of Bhutan, which is located in the ancient Paro watchtower, built to protect the city from invading Tibetan forces, as well as the amazing Drukgyel Dzong. Your last full day in Bhutan is spent on a short trek to one of the most famous and sacred monasteries in the world, the Taktsang Monastery. Known locally as the Tiger’s Nest Monastery and located on the side of the cliff overlooking the Paro Valley, the monastery lies on the site of the meditation caves of Padmasambhava, who is said to have flown to Bhutan from Tibet on the back of a tigress that was his former consort. The trek up to the monastery takes a couple of hours, and you can stop for some refreshing sweet tea along the way.

The Rough Cost for a 2-week Nepal Bhutan Tour

The cost of the tour to Nepal and Bhutan depends on the time of year that you will visit, and in both countries, it is always cheaper to travel in the low season. This is one tour of the countries that do not need to be taken in any certain season; unlike when trekking around the Himalayas, as the attractions can be reached all year round. As such, the costs vary, with higher prices in the peak seasons and lower prices in the low seasons.

For Nepal tour, the costs are very different to those in Bhutan, as there are no minimum requirements in Nepal for tourists. Accommodation prices can be as low as 15-30 dollars per night, while food in Nepal is some of the cheapest in Asia, with delightful flavors that will leave your mouth watering. The average meal in Nepal can cost from as little as 2-3 dollars, or as much as 8-10 dollars for a restaurant dinner. As with most places, the higher the star-rating of hotels and restaurants, the more it will cost. You can choose how much to spend on them at your discretion. Nepal is still one of the lowest cost countries to visit in Asia.

In Bhutan, there is a defined cost for the entire trip there, which is regulated by the Bhutanese government. For tours of Bhutan there is a Minimum Daily Package of US$ 250 per day in the peak seasons and US$ 200 in the low seasons. This price is based on you staying in a minimum of 3-star accommodation, and includes all of your tour expenses, from food and accommodation to travel costs within the kingdom, entrance fees for the attractions, and the cost of the tour guide and private driver. The only spending you will need to do is for personal items such as souvenirs and alcoholic drinks.

The Best Time to Take the 2-week Nepal Bhutan Tour

Nepal and Bhutan have very similar climates, and roughly the same peak and low seasons, which makes touring both countries together very easy to arrange. Spring and autumn, from March to May and September to November, are the peak seasons in both countries, when the weather is clear and dry, and the sun is bright, with warm temperatures. It can sometimes get a little cold at night, but rarely gets anywhere near freezing in the spring and autumn seasons. 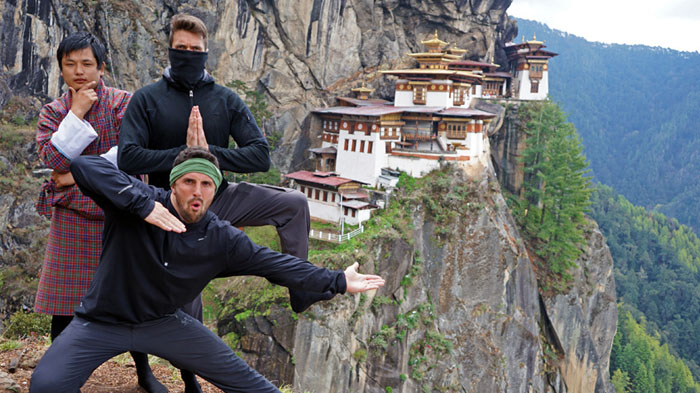 Spring is one of the best time to trek Tiger’s Nest Monastery when leaves turn to green.

Summer and winter, from June to August and December to February are the low seasons, when it can be cold and a little snowy or wet and hot. Summer is the monsoon, and while it is possible to tour at this time, you should be prepared for some rain. Similarly, winter can be traveled in as well, though prepare for colder nights in the higher areas of the countries. - know more about best time to visit Nepal and Bhutan

How to Get the Nepal and Bhutan Visas

The visa for Nepal is easy t obtain, and can be done on your arrival in Nepal at the Tribhuvan International Airport. The application is done through the internet-linked kiosks in the airport or online before you travel and you will get a barcode to present to the payment desk and immigration desk, along with your passport and two photos. Processing normally takes less than an hour, even in the busy periods. 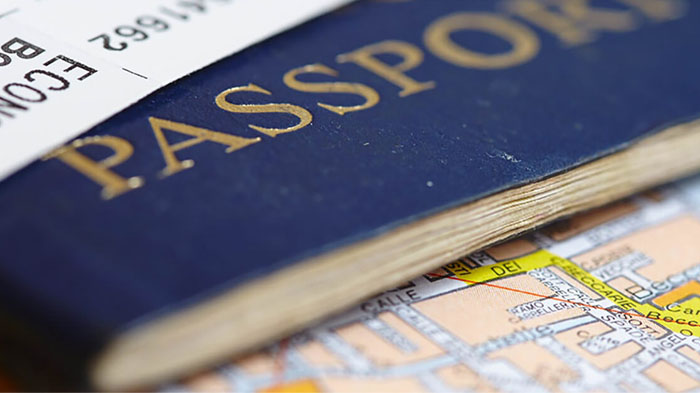 What you need to do is book Bhutan tour and then us a scanned copy of your passport.

For Bhutan, the only things you need to do to get the Bhutan Visa are book the tour and send us a scanned copy of your passport. As all tours in Bhutan require a pre-booked tour with a registered tour operator, your visa is applied for by the tour operator once the tour is booked, and there is no way to arrange it otherwise. Once the visa has been approved, we will send you the confirmation letter, for you to use to book your flight to Bhutan, and for the immigration officials at Paro International Airport. Once at the airport, the immigration officials will use the reference in the confirmation to check your visa clearance and issue the visa stamp into your passport.

Traveling to Bhutan and Nepal together is the best way to experience both of these amazing Himalayan countries. With similar climates and tourist seasons, touring both is easy to arrange and simple to book with us. We do most of the work for you, to make your planning and execution that much simpler. And with a combined tour of Bhutan and Nepal together, you can be sure that you will get the best possible experience of both countries, from the religious architecture and temples to the amazing local cultures.

0 Comment ON "Two Weeks in Nepal and Bhutan: how to plan a Nepal Bhutan tour for 14 days?"