Best Time to Travel to Nepal and Bhutan

With histories that date back thousands of years, Nepal and Bhutan are ideal for a combined tour of some of the best Himalayan landscapes in Asia. From the birthplace of Buddha to the last remaining Shangri-La of the Himalayas, Bhutan and Nepal make the best tour in South Asia, and together, they give you a good impression of what it is like to live in the shadows of the world’s largest mountain range.

Nepal is the birthplace of the Buddha, Siddhartha Gautama, the founder of Buddhism. Yet, the country is largely Hindu, with less than nine percent being Buddhist. However, Hinduism and Buddhism in Nepal have a unique relationship, with many of the Buddhist rituals being found in some form within the Hindu faith. A unique mix of two huge religions has produced a faith that transcends religious and national boundaries and has produced some of the most stunning Buddhist and Hindu architecture in the world, such as the Swayambhunath temple on the outskirts of Kathmandu.

Bhutan, the last true Himalayan kingdom, is a land of environmental and ecological preservations, and over 70 percent of the country is kept as forests and natural habitats. The second smallest country in terms of population, Bhutan has a policy of Gross National Happiness, instead of considering its exports to be the most important thing it has. One of the most ancient kingdoms in the Himalayas, getting there is not easy, and tourism in Bhutan is strictly controlled to sustain the environment and reduce the impact of tourists on the kingdom. It is widely known that Bhutan is the only country in the world with a “negative” carbon footprint.

What climate does Nepal and Bhutan have?

Nepal is a country of varying climates from high mountains to lowland sub-tropical jungles and plains, and a plethora of different climates in between. Bhutan has a similar climate and landscape, and both have defined seasons, with four seasons in the year. Spring and Autumn in both Nepal and Bhutan are the milder seasons, and are the peak seasons for tourism, with clear skies and comfortable weather. In winter, both countries experience cold weather and snow in the higher altitude areas, especially in Bhutan, where the winter snows can cut the east of the country off from the west. Summer is the monsoon season, and in both Nepal and Bhutan, the rains make trekking harder, and often impossible, due to landslides and dangerously slippery and unsafe trails. 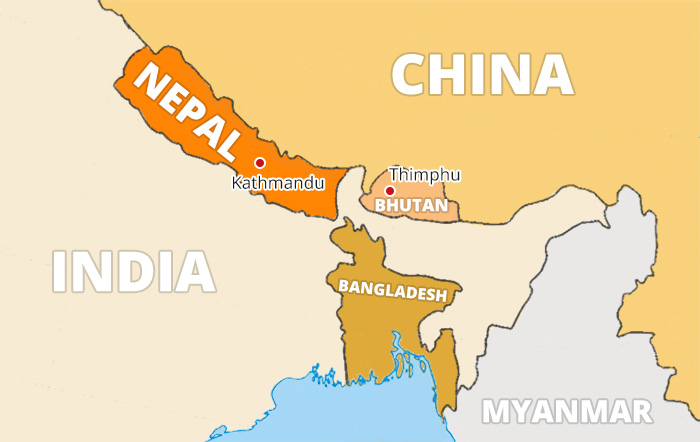 March to May is the spring season in Nepal, and the weather is mild to chilly, with clear skies and bright sunny days. One of the best times to travel the country for trekking, there are a host of different treks that can be taken in the spring, from the stunning Annapurna Circuit trek to the most famous of all, the Everest Base Camp trek. Spring sees very little rain across the country, and temperatures range from 20 degrees in the south to around 10-12 degrees in the northern mountains 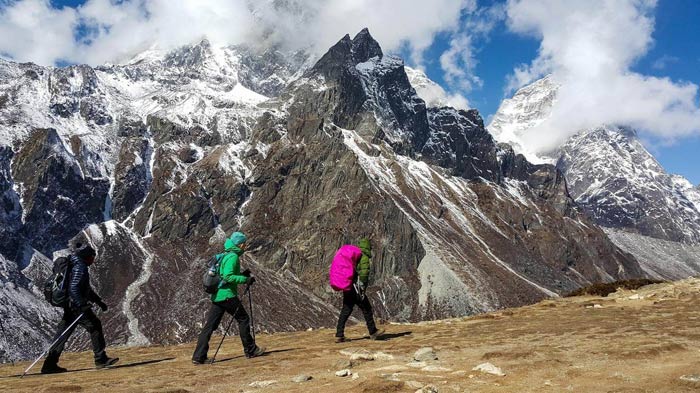 March to May is one of the best time to trek Everest Base Camp in Nepal.

Summer is not ideal for trekking in most of Nepal, as the monsoon season brings rains to most of the country, and the trails can get somewhat washed out and dangerous. Only in the high Upper Mustang Region can you trek in summer, as the monsoon rains do not reach that far into the dry arid mountains. However, there are plenty of other things to try, from canoeing and kayaking on the stunning rivers to white water rafting and paragliding in the lower Terai region of the country. If wildlife is your thing, then the summer months and the lush green foliage is the perfect time and place to find elephants, Bengal tigers, and even crocodiles on a wildlife safari on one of Nepal’s awesome national parks. Temperatures in summer usually range from 18-28 degrees from north to south.

The second trekking season of the year, autumn is the more popular period for trekkers to the high-altitude areas of Nepal. The weather in Nepal in the fall is dry and clear, with almost no rain at all, since the monsoons have drained the skies of rain. While the climate can still be a little humid, the chance of rain is negligible, which makes it a great time for trekking through the stunning mountain areas in the north of the country. Autumn is also the best time to travel to the lowland Terai region, and experience the delights of the Kathmandu Valley and the wildlife of the Chitwan National Park. Temperatures can range from 8-12 degrees in the north to as warm as 20 degrees in the south. Know more about Nepal Trekking

While winter in some high mountain countries is not recommended for tourists, in Nepal it is a wonderful time to visit. With so many places to visit in the lowland areas, once the rains and trekking season are done, there is plenty of time to visit the beautiful pagodas and temples of the Kathmandu Valley, which is considered to be the center of all Nepali civilization. Travel around the exotic capital of Kathmandu and visit some of the most amazing Hindu temples in the world, with just that touch of Buddhism to them. Or take a trip to the famous Lumbini, the birthplace of the Nepali Prince, Siddhartha Gautama, the founder of Buddhism.

Spring is the first season of the year where tourism is at its peak, and the weather is at its best for the treks and tours of Bhutan Kingdom. The varying landscape means that temperatures can range from around 8-10 degrees in the northern mountain areas to as high as 20-21 degrees in the far south, in the sub-tropical zones. The skies are clear and the sun is bright, with little chance of rain until the monsoons hit in around June or July. The beauty of Bhutan shows through in spring, with the valleys covered in fresh new growth and young green grass. 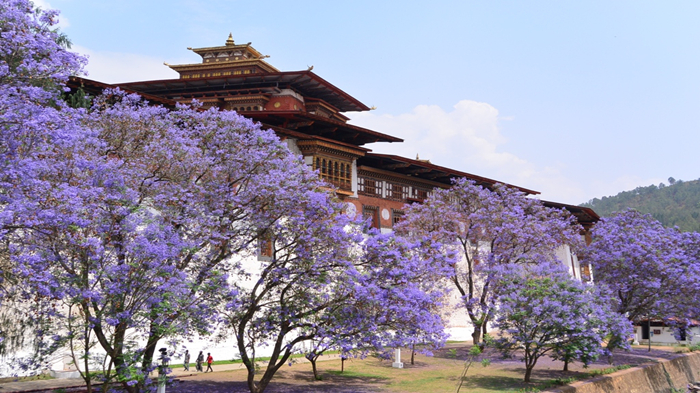 The beauty of Bhutan shows through in spring, with the valleys covered in fresh new growth and young green grass.

The monsoon season, from June to August, sees an increase in the rain, in both frequency and volume, though like most monsoon countries, it tends to fall in the late afternoon and evening mostly. The constant rain can also cause a lot of cloud cover, and if you are there for trekking or viewing mountains, then summer will leave you disappointed. However, temperatures in the summer are the hottest in the year, with even the mountain regions feeling warm, through wet and humid. While you cannot go trekking in most places, summer is a good time to explore the culture of the kingdom, and tour the ancient historical sites that are found all over Bhutan.

Autumn, from September to November, is the peak season for Bhutanese tourism, and a great time to travel. There is no need to worry about the huge crowds of tourists in the peak season either, as tourism in Bhutan is strictly controlled to prevent environmental damage to the country. The landscape is resplendent in reds and golds as the trees of the thousands of acres of forests cover the ground in a beautiful carpet of color. The weather is warm and comfortable, and trekking Bhutan is at its peak in the autumn months, with temperatures ranging from 4-12 degrees in the north, and reaching highs of around 22 degrees in the south.

Winter, from December to February, is a time when blankets of snow cover the ground and the classic white “winter wonderland” is a photographer’s dream come true in Bhutan. However, the road closures are frequent due to heavy snow, and getting up to the mountains is almost impossible. With much of the East-West Highway closed in the depths of winter due to heavy snowfall, it is a great time to tour the western Dzongkhags of the kingdom, around Paro, Thimphu, Wangdue Phodrang, and Punakha, where it is cool and milder, yet bright and sunny. It is also the best time to see the rare black-necked cranes that migrate from northern Tibet to winter in the warmer climes of the Gangtey Valley. Temperatures can drop well below freezing in the mountains to the north of the kingdom, and in the east, the temperature rarely gets much above 3-4 degrees in the daytime. 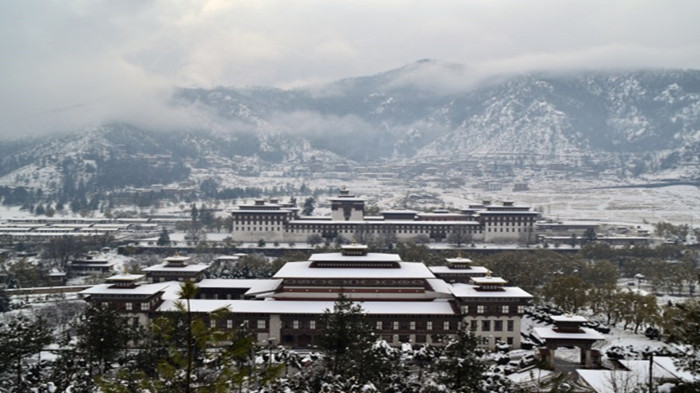 The classic white winter wonderland is a photographer’s dream come true in Bhutan.

When is the best time to visit Nepal and Bhutan altogether? And what to pack for Bhutan Nepal tour?

Bhutan and Nepal are countries that are majorly affected by the monsoon. Winter in both places, while a good time to visit can be cold and there is a chance of heavy snow in the higher mountain regions. Overall, spring and autumn are the best times to travel to Nepal and Bhutan together, as the weather is at its optimum for a truly enjoyable vacation.

However, as the autumn is the peak season in Nepal and Bhutan, it is best to book as early as possible. Spring is less busy in both countries and has the allure of the new growth that brings brightness and delight to the landscapes all around the Himalayas.

What to pack largely depends on the season you are traveling in. Summer tours usually require less warm clothing, since the weather can be pretty hot, even in the hilly northern areas below the mountains. However, you will need to have wet weather gear, as it can rain heavily.

Bhutan has the highest monsoon rainfall of anywhere in the Himalayas. Winter means that you will need plenty of warm clothing, and strong boots with woolen socks to stay warm. A good fleece or down jacket is also needed, and it is best to have gloves and a hat for protection from cold and sun.

Spring and autumn are milder times of the year, and while you can get away with lighter sweaters in the daytime, you will find that you need to have warmer clothing in the evenings and at night, especially if you are trekking and camping out.

Make sure that you have good strong boots for the rough ground, and woolen socks to keep your feet warm. A good hat to keep the head warm and the sun off is necessary, and if you are trekking, make sure you have a good warm sleeping bag for when you camp at night.

0 Comment ON "Best Time to Travel to Nepal and Bhutan"