Traveling to Tibet from Malaysia is relatively easy and can be done from either Nepal or mainland China. Being within Southeast Asia, travel between many Asian countries is easier and less demanding than from international locations outside Asia. There are direct flights to more than a dozen airports in China and multiple daily flights to Tribhuvan International Airport in Kathmandu.

For tourists from Kuala Lumpur, the Tibet Travel permit is a requirement, and must be obtained through a registered tour operator such as Tibet Vista once the tour has been booked. Application for the permit takes around 15-20 days and requires a scanned copy of the passport and visa (if entering Tibet from mainland China). And our travel consultants can help you obtain the permit, and it is not possible to do so without having a pre-booked tour.

One of the great options for traveling to Tibet is to incorporate your tour of the region with a longer tour that includes Nepal and mainland China as well. Here at Tibet Vista, we have multi-location tour packages to suit every need and requirement, and can even customize the trip a little, especially in Nepal and mainland China. Whether traveling from China across the Tibetan plateau to Nepal, or vice versa, these tours can make your trip to Tibet even more special, allowing you to explore some of the surrounding cultures that have had a profound influence on the Tibetan religious culture.

How to Get to Tibet from Malaysia? Multiple ways to travel from Kuala Lumpur to Tibet. 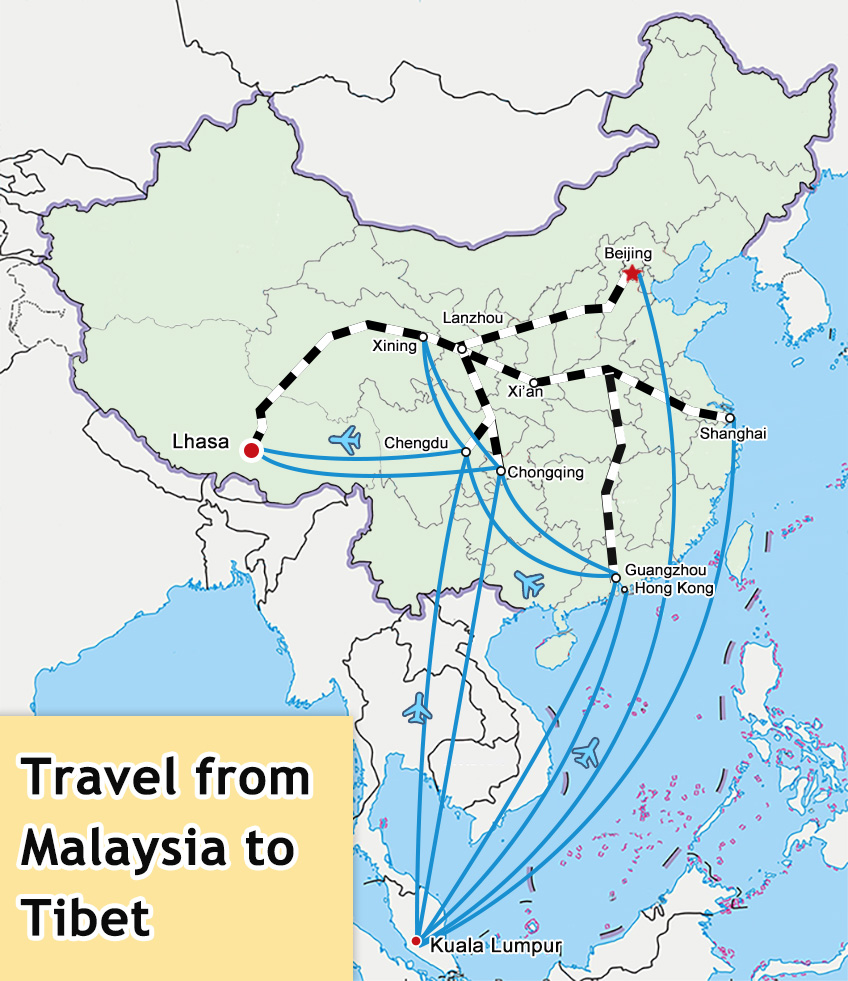 Direct flights to China leave from Kuala Lumpur International Airport several times a day to airports across China, including Beijing, Shanghai, Chengdu, and Guangzhou, as well as Hong Kong SAR. The average flight times are:

Once you arrive at your destination in China, we will forward your Tibet Travel Permit to you at your hotel of choice, ready for your journey to Tibet. The permit is needed to book tickets and board the flights and trains to Tibet and is required to be shown on arrival in Lhasa, at the hotels where you will stay, and at the various checkpoints around the region.

Coming from the opposite direction, Nepal is the only country in the world with direct international flights to Lhasa, the Tibetan capital, making it a preferable entry point for many travelers from Malaysia. Flights only run from the Kuala Lumpur International Airport, and take just 4 hours to reach the Nepali capital airport. With more than a dozen direct flights to Nepal every day, costing from around US$ 180 per person for an economy ticket, Kathmandu is the cheapest and easiest way to get into Tibet.

There are several daily flights from Kathmandu’s Tribhuvan International Airport, provided by Air China, Tibet Airlines, and Sichuan Airlines. The flight normally takes just 90 minutes and has the added advantage of allowing you a bird’s-eye view of the summit of Mount Everest as the plane flies over the Himalayas. An average economy ticket costs from around US$ 400.

One of the most amazing adventures of all is the journey across the Himalayas to Lhasa, traveling overland by car across the roof of the world. The journey starts in Kathmandu, and you can take our tour bus to spend the night in a village near Gyirong border and cross the border the next morning. The ride from Kathmandu to Gyirong border takes around 7-8 hours.

Private cars can also be arranged for this trip. Once on the other side of the border, at Gyirong Port, you will pass through immigration and your guide and driver will be waiting for you on the other side. You will then transfer to Gyirong Town to spend your first night on the plateau, before heading off across the region to the stunning capital, Lhasa. The route across the plateau takes in some of the most amazing sights in the world, including the mighty Mount Everest, the holy Lake Yamdrok, And some of the many monasteries and temples of the Tibetan Buddhist religion. In Lhasa, you can experience the heart of Tibetan culture and religion at the Jokhang Temple and the famous Barkhor Street.

If you are planning to enjoy a trip to Tibet from Malaysia, yet have no ideas of how to sort it out the details, no worries! We would like to hear your tour plan and offer free professional consultancy and viable solutions. Please feel free to contact us.