Tibet’s nearest neighbor, Nepal is one of the closest gateway countries to enter Lhasa, either overland or by flight. It’s also the only country with an international flight to Tibet. You can easily take flight from Kathmandu to Lhasa. After your Tibet tour is done, if you prefer, you can further travel to other cities, such as Chengdu, Beijing, Shanghai, and Guangzhou, etc. in mainland China and finally fly back to Nepal.

Despite being Tibet’s closest neighbor, Nepali citizens are still required to have the Tibet Travel Permit to enter the Tibet. Besides, a group tourist visa is also a must, esp. for Tibet entry from Nepal. For our clients, we offer free Tibet permit service. After you book our Tibet tour, do email your photocopies of your passport, visa, and a digital photo of yourself to your travel consultant for permit application,(at least 20 days before your departure) As to Group Tourist Visa, you can leave your passport in our office in Kathmandu and the visa process takes at least 3 days. So, do set aside enough time for it.

Most Popular Tibet Tour From Nepal

For Nepali tourists, traveling through the heights of the Tibetan plateau and on to China is a great opportunity to cover two places at once, and means you can experience the mystery of Tibet, with its ancient monasteries, sacred mountains, and shimmering lakes. Then, moving on to China, you can find out more about the ancient Chinese culture, and the beautiful countryside. Packages can be arranged to take you from Kathmandu, your home capital, through Tibet and on to mainland China to make the most out of your holiday.

How to Get to Tibet from Nepal? Multiple ways to travel from Kathmandu to Tibet.

By the Epic Overland Tour from Kathmandu to Lhasa
With your home country being one of the primary entry points into Tibet, taking the overland tour to Lhasa from Kathmandu is an ideal tour. Traveling by bus to the border crossing at Rasuwagadhi Fort, on the southern side of the Resuo Bridge spanning the stunning Trishuli River Gorge, takes around 7-8hours, with a stop for a meal on the way and one night spent close to Gyirong border, and costs just 2,500 rupees. Once through immigration on the Chinese side of the border, our guide will meet you at the immigration building waiting area, and will escort you to the car to take you to Gyirong Town for your first night. From there, your tour will start, traveling across the immensity of the Tibetan plateau to Lhasa, passing over high mountain passes, traveling across vast open prairies, and stopping to admire the stunning lakes and landscapes of Tibet. Once in Lhasa, you will get to experience the best of Tibetan culture and religion in the region’s capital and cultural heart. 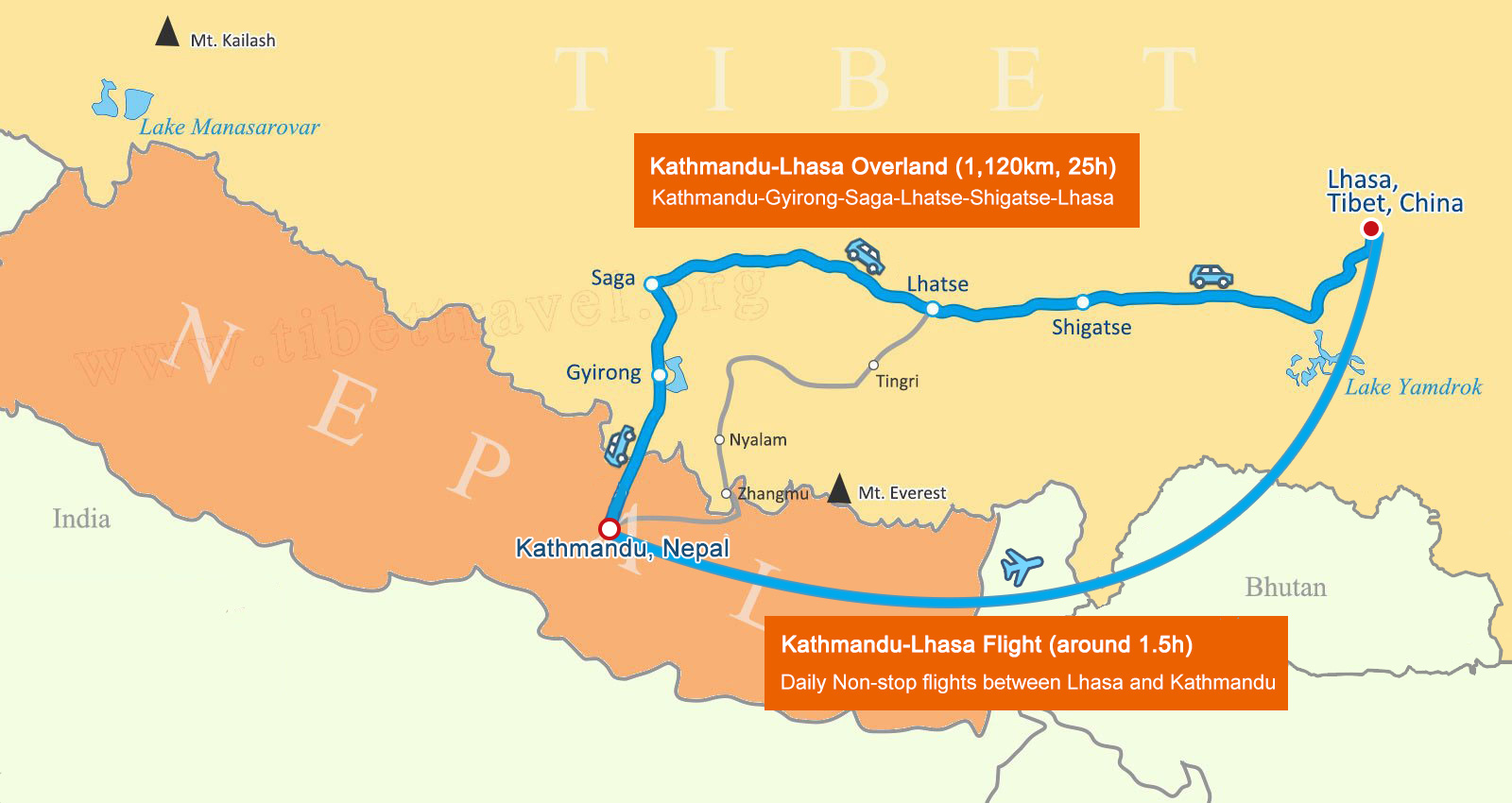 While Nepal may be a neighbor of Tibet, there are enough reasons for you to make a detour to first take flights to Chinese cities such as Chengdu, Guangzhou, Beijing, or Shanghai , etc. and later travel to Tibet. You will be able to enjoy some of the amazing sights in China before moving on to the plateau. From the seven gateway cities in China, trains run daily or every other day to the plateau, making your tour an even better adventure, or you can take the flights to Lhasa once you are complete with your tour of China’s major cities and attractions.

Flights to China from Nepal are frequent, and can be found for a very good price using the many comparison websites available to get the best deal. Direct flights are available to many of the Chinese airports, including Chengdu, and Guangzhou, while flights to Beijing and Shanghai are indirect flights with at least one stop in Chengdu, Guangzhou, or Xi’an. The average flight times are:

If you prefer to visit mainland cities first from Nepal and later travel to Tibet, we can help you get Tibet Permit. When you arrive in China, you will receive your Tibet Travel Permit at your hotel ready for you to take your trip to Tibet. You have an opportunity to spend some time in China at your preferred locations seeing the sights and exploring the wonders of this ancient civilization before heading off to Lhasa by train or flight. Your Tibet Travel Permit is required in order to book and board both flight and train.

By flight
imilar to Shanghai, there are no direct flights to Lhasa from Guangzhou, although there are a number of indirect flights, with stopovers in Chongqing and Chengdu. The average flight takes from 5 hours 55 minutes to 10 hours 30 minutes, and costs from around US$ 455.

By train
Departing at 11:45am daily, the train from Guangzhou takes over 53 hours to get to Tibet, making it the longest of all the train journeys to Lhasa. For small children and the elderly, the long ride could be a challenge. Covering almost 5,000 kilometers, the train arrives in the Tibetan capital at around 5:05pm on the third day.