Saga to Manasarovar: distance, how far, road condition, map and what to see along the way

Often driven along as part of a tour to Mount Kailash and Lake Manasarovar, the section of the route between Saga and Darchen, the gateway to Mount Kailash, is one of the most beautiful parts of the drive, with stunning scenery, exotic plateau landscapes, and views of the Himalayas that cannot be found anywhere else in the world. Known in Tibetan as “Kyakyaru”, Saga township is the seat of Saga County in the Shigatse Prefecture of the Tibet Autonomous Region. At an altitude of 4,640 meters above sea level, this former military town lies on either side of the Dargye Tsangpo River, just the north of its junction with the Yarlung Zangbo River, also known as the Brahmaputra.

Strategically located at the junction of three major roads, this small township is an important waystation for tourists and pilgrims traveling to the sacred Mount Kailash. With several hotels and guesthouses, as well as stores and a restaurant, it is the last major town on the route to Kailash from the south, and one of the most important rest stops along the way.

The road from Saga to Huo'erxiang, on the shores of Lake Manasarovar, stretches for 450 kilometers along the G219 National highway, which runs on all the way to Kargilik in Xinjiang Uygur Autonomous Region. The stretch of road from Saga to Lake Manasarovar, which passes through the town of Paryang in Zhongba County, takes around 6 hours to complete the total distance, and can be done in one day, though most tours do it in two days, stopping at Paryang for the night on the way. 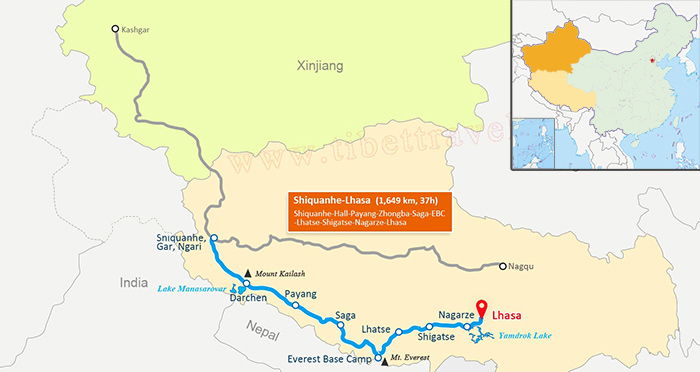 (Simple click to enlarge the map)
The road from Saga to Manasarovar runs on all the way to Kargilik in Xinjiang Uygur Autonomous Region.

Most of the road from Saga to Darchen is relatively new, and has been covered in asphalt to make the driver easier and faster, with a smoother road surface. The whole route condition from Lhasa to Darchen is mostly paved road, with only a few small stretches still consisting of a gravel surface, as they are still waiting to be completed. There are desert sections of the road between Saga and Darchen, around the Paryang area, where the road is still desert sand.

Scenic View to Enjoy along the Way

The views of the landscapes and scenery along the route from Saga to Lake Manasarovar are some of the most spectacular of the trip, and are a welcome addition prior to the culmination of the epic journey. Some of the most popular sights along this route are in the Paryang Desert and the beauty of the Kunggyu Lake. Although these attractions are great opportunities for photos, it is advisable to get the driver to stop to take them, as winding down the window of your vehicle to get the photos can result in a lot of dust getting into the car.

The Paryang Desert is one of the driest areas of Tibet, but one of the most beautiful as well. As the road from Zhongba continues to head north, the giant sand dunes of the desert begin to appear, a strange sight lying next to the lush grasslands and crystal-clear lakes. This high-altitude desert is seductive in the way it contrasts so harshly with the green landscape, and soon the entire vista is one of massive sand dunes in this vast desert land. This desert stretches deep into Burang County, and almost all the way to Lake Manasarovar itself. 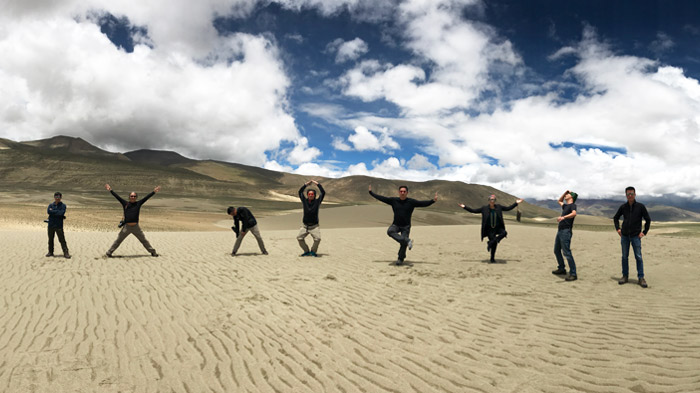 Having great fun in Paryang Desert on the way to Mt.Kailash

Kunggyu Co is a small, elongated lake that sits along the side of the Xinjiang Tibet Highway in Burang County of Ngari Prefecture. Only around 100 kilometers from Lake Manasarovar, this small lake is dwarfed in comparison to the sheer size of the sacred lake. Sitting at an altitude of around 4,680 meters, this elongated lake is one of the fewer freshwater lakes on the saline Tibetan plateau, and is a beautiful sight in the almost desert landscape surrounding it.

Lying in an alluvial plain between the Himalayas and the Transhimalaya range known as the Gangdise, the location of Mount Kailash, around 4.5 kilometers south from the lake are one of the least-known hot springs in Tibet. With hot water gushing out of the ground into the pools at a temperature of around 71 degrees, the steam can be seen for miles around, and it makes a great place to stop and relax for an hour.

The route to Manasarovar passes through three small towns as it passes through northwest Shigatse and on into Ngari Prefecture. Saga, the first of them, lies at an altitude of 4,640 meters, and is a garrison town for the soldiers that patrol the border between China and Nepal. Known as the “happy land”, Saga lies on either side of the Dargye Tsangpo River, one of the main tributaries of the Brahmaputra, known in Tibet as the Yarlung Zangbo River. It is the junction point for several major routes into the area, the road from Lhatse coming from the east, the road from Zhongba coming from the south, and the two roads from the west, from Purang and Drongba. It is also one of the major stopping points for tourists and pilgrims heading to Mount Gang Rinpoche to perform the ritual Kailash kora. 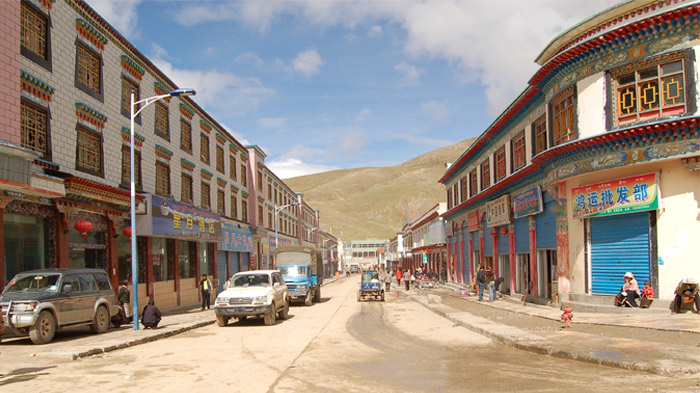 There are good hotels and restaurants in Saga.

A sprawling truck-stop style town, Saga is the last large town before Mount Kailash, and one of the overnight stops for most tours, as there are good hotels and restaurants in the area. While there is actually little to see in the town itself, it makes for a great place to wash up, check your emails (there is no internet available in Darchen) and stock up on supplies for your trek around the sacred mountain.

Zhongba County is the last county in Shigatse Prefecture before entering Burang County in Ngari. Translated literally as “place of Gaur”, it is the largest of all the counties in Shigatse. Zhongba is actually a township level district of Shigatse Prefecture level city, and the actual town itself is an old and dusty relic of ancient times at the side of the road to Paryang. Known as “Old” Zhongba, since Paryang is known locally as New Zhongba, the small town has few guesthouses for travelers and pilgrims on he road to Mount Kailash, a couple of simple restaurants, and a gompa. Part of the Sakya School of Tibetan Buddhism, the Dradun Gompa is worth a visit. 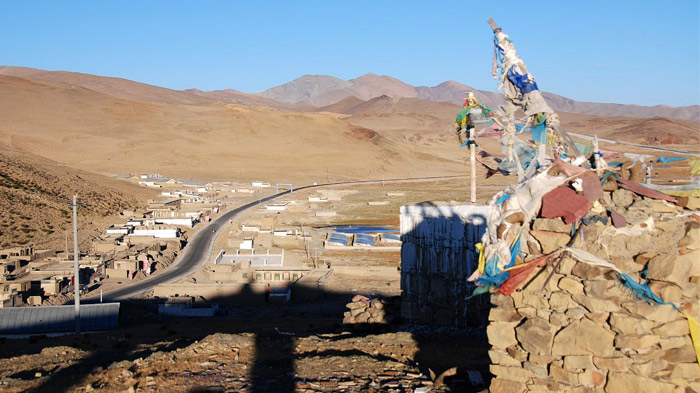 Zhongba County is the largest of all the counties in Shigatse.

One of the most remarkable aspects of Old Zhongba is the stunning view from the nearby pass. As you leave the small town on the road to Manasarovar, passing through the immensely photogenic area of the desert to the north, the road heads up into a high-altitude mountain pass, at around 4,780 meters. From the top of the pass, the view of the expansive Paryang Desert is awesome, and you can see it stretching for miles ahead, with the slight glimmer of the Gangdise Mountains in the background.

Paryang is the last of the towns you pass through on the way to Lake Manasarovar, and is usually the final stop before reaching Lake Manasarovar and Mount Kailash. Lying in Zhongba County, it is around 260 kilometers from Darchen, the gateway to Mount Kailash, Paryang lies at an elevation of around 4,700 meters. The town is surrounded by grasslands and it is common to see the yaks and sheep of the local herders grazing on the nearby pastures. 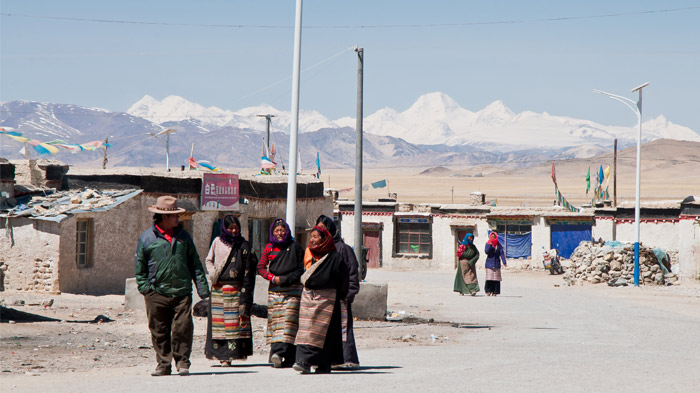 Also known and spelled as Baryang, the local side of the town is made up of numerous mud-brick houses that are the winter homes of the local nomadic herders. The only decent modern building in the town is the school that was built for the education of the children of the nomads. The streets are unlike the more Chinese-oriented towns of Saga and Zhongba, and are dusty gravel roads with no reinforcement and no drainage or sewer systems.

A medical practice can be found in Paryang, which provides the emergency medical treatment for locals and tourists alike, giving treatment to trekkers that have the more serious symptoms of altitude sickness from trekking around Mount Kailash. - Check Altitude of Mt. Kailash Kora and How to Avoid the High Altitude Sickness

A few restaurants and hostels line the main road, providing sustenance and lodging for travelers heading for Lake Manasarovar and Mount Kailash, and a few shops can be found selling basic goods. A small Buddhist temple lies off to the side of the road, standing out among the local mud houses, and a large prayer wheel stands outside, a testament to the pilgrims that regularly walk along the road heading for the sacred mountain.

0 Comment ON "Saga to Manasarovar: distance, how far, road condition, map and what to see along the way"