Mount Kailash Tour from Nepal: how far and how to get to Mt. Kailash and Manasarovar by road and flight

Mount Kailash is the most sacred mountain in the world. Located in Ngari Prefecture, it is the highest peak in the Gangdise Mountain Range and stands at 6,638 meters above sea level. The mountain is considered to be sacred in four separate religions, Hinduism, Buddhism, Jainism, and Bon, the ancient religion of the Tibetan people that pre-dates Buddhism in the region.

To the south of the sacred mountain, and just as holy in the eyes of these four religions, lies the stunning Lake Manasarovar, with its twin, Lake Rakshastal. Also known as Mapam Yumtso, Lake Manasarovar is one of the Great Three Holy Lakes of Tibet, and a place of pilgrimage for both Hindus and Buddhists. During the period of the Kailash Manasarovar Yatra, thousands of Buddhists and Hindus flock to the lake after trekking the ritual kora around Mount Kailash, to bathe in and drink from the sacred waters.

With thousands of pilgrims and tourists traveling to these holy sites every year, there is the option of traveling to Mount Kailash and Lake Manasarovar from Kathmandu, and there are various routes that one can take to get there.

Traveling overland from Kathmandu to Mount Kailash and Lake Manasarovar is one of the easiest ways to get to the holy sites and is traveled by thousands of tourists every year. There are, however, several permits and passes that are required for any tour to Mount Kailash area of Ngari Prefecture, which can only be obtained through a registered tour operator such as Tibet Vista.

Once you have the visa, you will be able to head for Tibet. The overland route to Tibet from Nepal crosses the border at Gyirong Port, the new border crossing checkpoint that was opened in August 2017, after the crossing point at Zhangmu was destroyed by an earthquake.

Travel to the border can be done in one of two ways. If you are working on a budget, then the best way is to take the public bus from Kathmandu direct to the border. The buses leave daily in the morning and take around six hours to travel the 120 kilometers to the border. The roads are not good as they head up into the mountains, which makes the journey a little slow, but the bus does stop for lunch on the way. 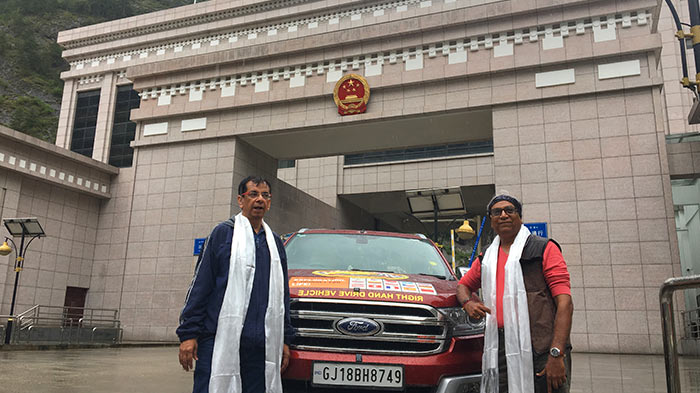 Driving to Gyirong Port is the other choice

The other way to get to the border is to get a private car to drive you, and we can arrange this for you at an additional cost. However, this method is the most expensive option, and can be quite costly. It does not reduce the traveling time by much, either, as the route is still the same. It just makes the journey more comfortable.

Once you reach the border at Rasuwagadhi Fort, on the Nepali side, your transport will drop you off on the Nepal side of the Resuo Bridge, which spans the Trishuli River Gorge, the border line between Tibet and Nepal. After processing through Nepalese customs, you will have to walk the short distance across the bridge to the Chinese side, where you will be processed through Chinese immigration. Once cleared to enter Tibet, your guide and driver will meet you at the immigration office, and escort you to your private vehicle to be transferred to Gyirong Town, the first stop for most of the tours into Tibet from Kathmandu.

From Gyirong Town, it is a drive of around 593 kilometers to Darchen, the small town at the foot of Mount Kailash. Normally, this kind of drive would take around 13 hours of non-stop driving. However, you will normally stop in Saga and Paryang on the way, and you will need to stop to acclimatize as well. The first acclimatization day would normally be spent at Gyirong Town, since you would already have ascended over 1,500 meters since leaving Kathmandu. 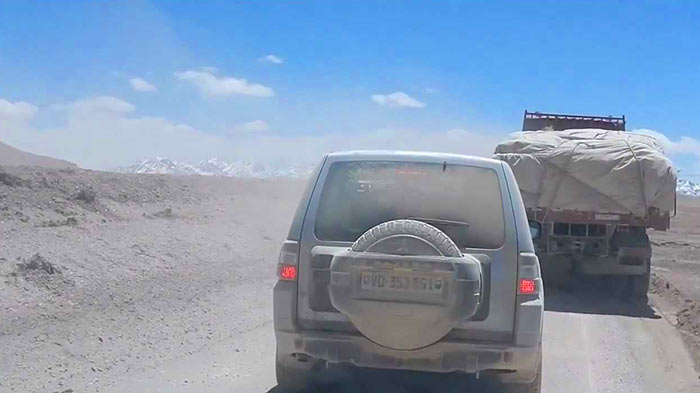 From Gyirong Town, the road heads north along the G219 National Road to Saga, the county seat of Saga County in Shigatse Prefecture. At an altitude of around 4,450 meters, it is quite a rise from the lower altitude of Gyirong. From Saga, the route then heads on to Paryang, at 4,600 meters. It is advisable to stop for a day to acclimatize in either Saga or Paryang before heading on to Darchen, the final destination for Mount Kailash.

Kathmandu to Mount Kailash and Lake Manasarovar with Flight to Lhasa

The alternative to taking the overland route from Kathmandu is to take a flight to Lhasa, and then take the tour from there. This actually makes it easier for acclimatizing, as the first part of any tour that includes Lhasa allows a few days to acclimatize and see the sights of the city before traveling on to Mount Kailash. As Lhasa is at an altitude of around 3,638 meters, you will not really need to acclimatize again before reaching Paryang.

As the only international airport with direct flights to Lhasa, Kathmandu’s Tribhuvan International Airport is unique. Flights leave for Lhasa Gonggar International Airport several times a day and take as little as 90 minutes to cross the thousand-kilometer distance. One of the benefits of flying to Lhasa from Kathmandu is the view whilst you are in the air. The flight corridor to Lhasa follows a path that takes it directly over the peak of Mount Everest, and if the day is clear, you get a great aerial view of the summit from the plane.

Overland from Lhasa to Mount Kailash and Lake Manasarovar

In Lhasa, you will get to visit the famous Potala Palace and he sacred Jokhang Temple, as well as Drepung and Sera monasteries before you leave. Then it is out on the road towards Shigatse, stopping at Gyantse on the way to visit the Pelkor Chode Monastery and its 32-meter-high Kumbum, the only stupa of its kind in Tibet. In Shigatse, you will get to see the Tashilhunpo Monastery, the seat of the Panchen Lama and the only monastery in Tibet to house three separate schools of Tibetan Buddhism under one roof. 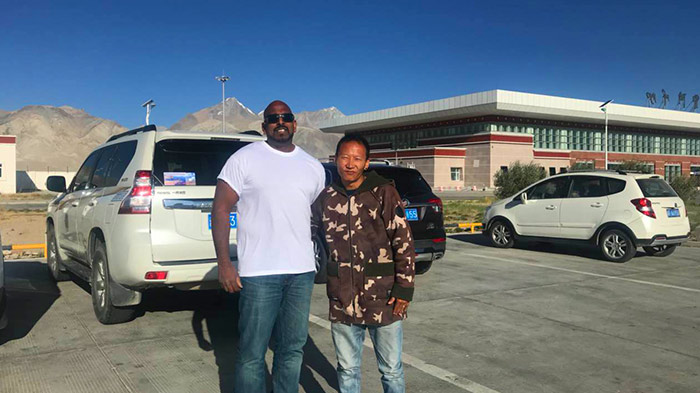 Driving to Mount Kailash from Lhasa with the local tour guide

On leaving Shigatse, you will first head to Saga and then Paryang, where you can spend the day adjusting to the ascent in altitude, before heading off to Darchen and Mount Kailash. Lake Manasarovar lies just a short distance from Mount Kailash, to the south, lying next to its sister lake, Rakshastal. While Manasarovar is deemed to be a sacred lake, Rakshastal actually hold very little religious significance, and is believed to be a place of severe penance in Hinduism and is known as the lake of the Demon.

When traveling from Nepal to Tibet, the first permit you will need is the Tibet Travel Permit, which allows entry to the region and travel around Tibet. This can only be obtained by the tour operator once a tour has been booked and requires the scanned copy of your passport for processing the application. The standard processing time for this is around 15-20 days, and you need to book early to ensure your permit is ready for when you want to travel. 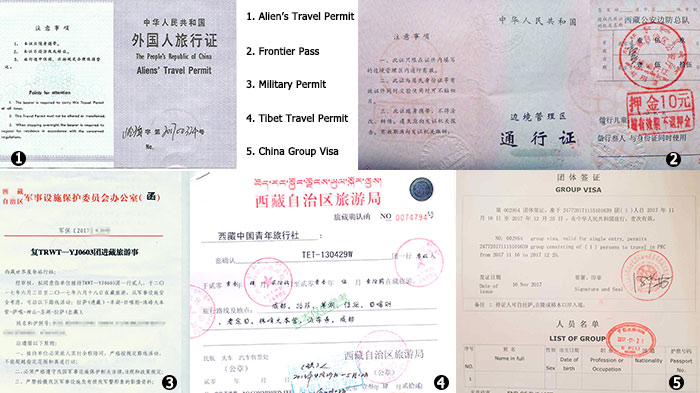 Required Permits in the Kailsh tour from Kathmandu

You will also need to have the Alien’s Travel Permit and the Frontier Pass, for travel outside Lhasa and for travel in the area of the borders with India and Nepal respectively. These can be obtained by us from the relevant offices in Lhasa, using your scanned passport and Tibet Travel Permit for the application.

Once all your permits are received, our agent in Kathmandu will meet you to arrange your visa for entry into Tibet. The standard Chinese Entry Visa is not valid for entry into Tibet from Nepal, and a Group Tourist Visa is issued by the Chinese Embassy in Kathmandu instead. This cannot be obtained personally, and our agent will request your original passport to process your visa application with the embassy. Processing takes around three working days, and it is recommended that you arrive in Nepal at least five working days before your expected departure date to allow plenty of time for the processing of the visa.

0 Comment ON "Mount Kailash Tour from Nepal: how far and how to get to Mt. Kailash and Manasarovar by road and flight"