Lying in the far west of Tibet, in the Gangdise Mountain Range, sits the most sacred mountain in the world. Known in different tongues as Gang Rinpoche, Kangrinboqê, and Mount Kailāsa, in English it is more well known as Mount Kailash, the sacred mountain of four religions.

Part of the Transhimalaya range of mountains, which cross the center and north of Tibet, the Gangdise Mountains form the boundary of the Himalayas with the northern plains of Tibet. On the southern edge of these mountains, somewhere in the middle of the range’s length, lies this holy mountain that exists both in reality and in legend.

Is it possible to climb Mount Kailash?

At just 6,638 meters above sea level, the mountain is far from being one of the highest mountains in Tibet, yet it has never been climbed by modern man, and it is likely that it never will be due to its unique religious significance.

A pyramid of black rock that stands tall above its compatriots, Mt. Kailash was the subject of possible mountaineering expeditions since it was first discovered by western explorers almost a century ago. However, thanks to the intervention of the Chinese government in response to the mounting concern that a Spanish team were getting ready to climb the mountain, the holy peak will forever remain just that, an inaccessible peak where the gods of four religions are believed to reside.

It was in 1926 that the first interest in climbing Mount Kailash began, when famous mountaineer, Hugh Ruttledge, began his study of the north face of the mountain. He estimated the height back then at around 6,000 feet above the plateau, and was advised that the mountain was “utterly unclimbable” by the British Mountaineering Association. During his study of the north face, he believed that he may have discovered a way to reach the summit, but ran out of time and the snow cut off any hope of making the ascent.

Similarly, to the south, Colonel R. C. Wilson also considered the climb, and was advised by his Sherpa companion that is could definitely be climbed. He too ran out of time, with the harsh Tibetan winter drawing close, and gave up the idea for the time being, never to be able to return to fulfill his ambitions.

In 1936, Australian author and climber, Herbert Tichy, was exploring the area around GurlaMandhata, a mountain in the sub-range of Nalakankar Himal in Burang County when he saw the mountain and wondered if it would be an easy climb. When he asked a local lama if the mountain could be climbed, the lama told him that "Only a man entirely free of sin could climb Kailash. And he wouldn't have to actually scale the sheer walls of ice to do it – he'd just turn himself into a bird and fly to the summit." 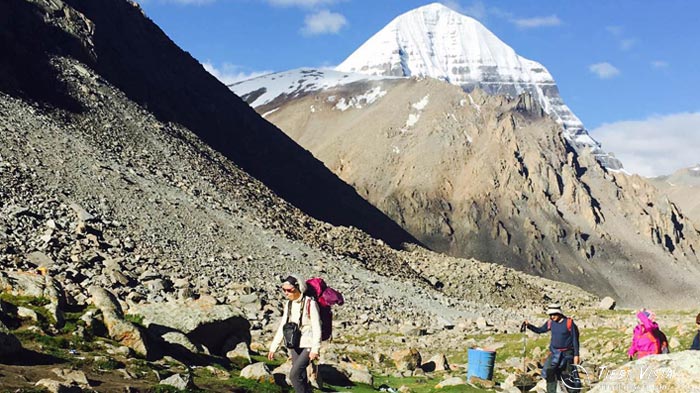 It was not until the middle of the 1980s that an expedition was actually considered, and permission was given to Reinhold Messner, the Italian mountaineer, explorer, adventurer, and Author, who made the first solo ascent of Mount Everest. Messner actually declined the proposition. In a later statement, Messner said that the mountain was considered holy, which was the reason he declined the expedition offer. In his statement he is reported to have said: ”If we conquer this mountain, then we conquer something in people's souls. I would suggest they go and climb something a little harder. Kailash is not so high and not so hard.”

Because of the COVID-19 epidemic, Mount Kailash tours had been closed to overseas tourists for a while. But now, it has reopened to Indian pilgrims and other expat tourists in the mainland of China.

Though mountain climbing is not allowed on Mount Kailash, you can take a 3-day Kailash Kora to closely feel the spirit of the holy mountain by joining a Mount Kailash Tour.

Once you book your Kailash tour with us, we will handle all the details for you, including applications for all required travel documents. We provide the 100% guaranteed Tibet Permit for all our customers. Now, it’s time to get to Mount Kailash!

How Close Can I get to Mount Kailash?

The best way to get close to the holy mountain is to trek to Mount Kailash. The Classic Mount Kailash kora takes 3 days, during which you can see the summit of Mount Kailash from different angles up close. Mount Kailash Inner kora will take you to reach the 13 Golden Chortens and Saptarishi Cave, which is the highest point that pilgrims and tours are allowed to visit.

As a prominent mountain in the beliefs of four separate religions, there are many legends that surround the mountain. Some are believed to be true, while others are known to be legends, and many are part of the religious beliefs of millions of people throughout Asia and the world.

In Buddhism, the mountain is known as Gang Rinpoche, which translates to “Precious Snow Mountain”, and it is indeed believed to be precious in Tibetan Buddhism. In the Buddhist texts, Mount Kailash is believed to be the legendary Mount Meru, the center of Buddhist cosmology. Subsequently, it is a place of holy pilgrimage for many Buddhists, who come from all over the plateau walking sometimes for a thousand kilometers to pray and prostrate their way around the ritual kora route at the base of this most sacred of mountains. 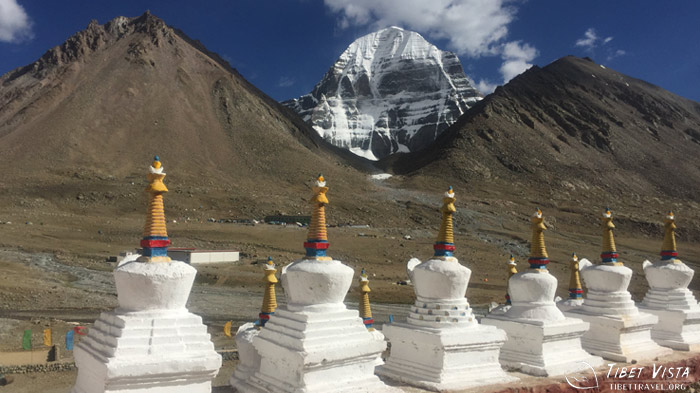 In another branch of Buddhism, the mountain is believed to be the home of Demchok, one of the central deities of Vajrayana Buddhism in Tibet. It is believed that the mountain, and Demchok, represent the supreme bliss of enlightenment.

One of the most famous and well-known legends of Mount Kailash in Tibetan Buddhism is the legend of Milarepa and the Bon champion, Naro Bon-Chung. It is said that Milarepa, the Buddhist champion, arrived in Tibet to challenge Naro Bon-Chung, the champion of the Bon religion in Tibet at the time, over the mountain. For days the two mages engaged in a ferocious battle of magic, but neither was able to gain the upper hand, so well-matched were they. It was agreed that, to settle the matter, the two champions would race to the top of the mountain, and the one that got there first would be proclaimed as the victor.

Naro Bon-Chung sat on a magic drum, and began to soar up the slope of the mountain, while Milarepa merely sat to meditate. As the Bon champions neared the top, Milarepa opened his eyes, and shot to the summit on a ray of sunlight. Though he was victorious in claiming the mountain for Buddhism, he was benevolent, and threw a handful of snow onto the nearby peak of Mount Bönri, bequeathing it forever to the Bonpo to maintain their connections to the sacred region of Mount Kailash.

According to the Hindu scriptures, the mountain is the earthly representation of a legendary mountain known as Kailāsa. It is said that the Hindu god, Lord Shiva, resides at the top of Kailāsa with his wife, Pārvatī, where they rest in eternal meditation. In Hinduism, it is believed that Lord Shiva was the founder of Yoga, the meditative exercise practice, and is often referred to as “Adi-Yoga” by many Hindus. 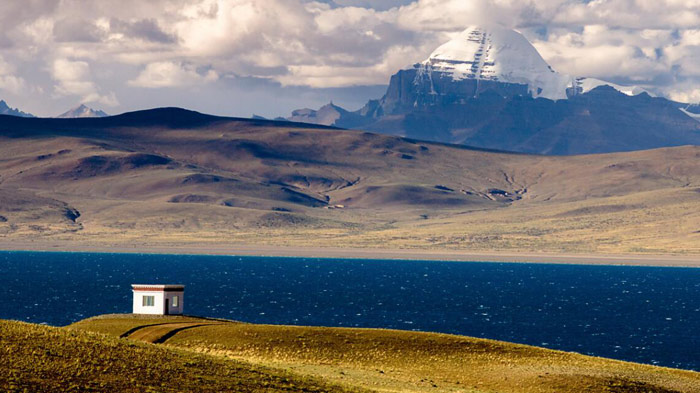 In the Hindu scriptures, it is said that Kailāsa is a mountain with four sides, the faces of which are made from gold, ruby, crystal, and lapis lazuli. The mountain is marked as one of the pillars of the world, and lies in the very heart of six other mountains, forming the shape of a perfect lotus. For many Indian Hindus, the trip to the mountain as part of the Kailash Manasarovar Yatra is the pilgrimage of a lifetime, and hundreds of thousands of Indians apply for inclusion in the yatra, while only a few thousand get chosen to make the journey.

The Jain religion also considers the mountain to be the legendary Mount Meru, the center of the entire universe. According to the Jain scrolls, the nearby Mount Ashtapada is the site where the first Jain master, a tirthankara known as Rishabhadeva, attained his enlightenment, or moksha in Jainism.

An ancient Indian religion, the Jain Dharma believes that Rishabhadeva, their first of 24 tirthankara, lived more than a million years ago, and that the 24th and final tirthankara, Mahāvīra,attained enlightenment in around 500 BC. Very similar in form to Buddhism and Hinduism, the Jain religion was never very prominent in Tibet, and mostly existed in the norther areas of India.

The original native religion in Tibet, Bon is actually the modern name given to the shamanistic religion that was practiced prior to the upsurge in Buddhism in the late 7th century, and then later in the eighth century when it became the predominant religion. 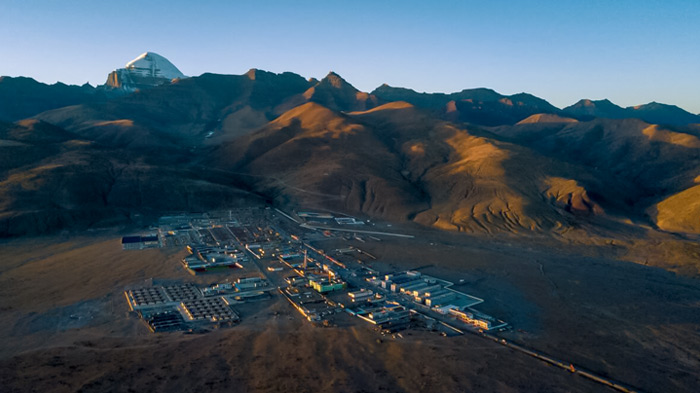 Majestic Mt. Kailash dominates the Darchen town at its foot

Known as the “axis mundi” in Bonpo, Mount Kailash is the world axis, or world pillar, and is considered to be the connection between heaven and earth. Normally found at the conjunction of the four points of the compass, the axis mundi acts as the means of communication between heaven and earth, with blessings coming down it to be disseminated to all on the earth below, and prayers from the people below ascending the mountain to be heard by the Bon deities.

While the Bon religion did not really rise in Tibet until the 11th century, it has established scriptures that come from hidden teachings known as termas, and visions by their tertons (historical text discoverers), with Loden Nyingpo being the most revered of all the visionaries. Much of the scriptures of the bonpo religion contains legends, stories, and myths of ancient Bonpo mystics existing long before the birth of Buddha in the 3rd century BC.