Travelling from Indonesia to Tibet involves two parts: firstly fly from Jakarta to major Chinese cities (such as Beijing, Shanghai, Guangzhou, Chengdu, HK) or to Kathmandu. Then after you get your Tibet Permit or Group Tourists Visa (in Nepal), you may take flight, Tibet train or enjoy the overland road trip to reach Lhasa. As a well-established Tibet tour operator in Lhasa and the best traveler’s choice on Trip Advisor, we offer you a variety of Tibet tours covering China, Tibet and Nepal. Check the adventurous Tibet tours and the useful Tibet travel guide for you.

Please bear in mind that backpacking or independent travel is not available in Tibet, according to the government’s policy. So, to reach Tibet from Indonesia, the first step for you is to book your Tibet tour with us and we will help you get Tibet Permit for free. To do so, you need to send the scanned photos of your passport and Chinese visa page and your photos to us by email. After we get your Tibet Permit, we will send it back to your hotel in Tibet entry city in mainland China. But remember, plan ahead! Send over your documents 20-30 days before you want to make the travel to avoid mishaps. If you enter Tibet from Nepal, our staff in Kathmandu will help you get Group Tourist Visa as well. So, just tell us your travel date, activities and preferences, our travel consultants will work with you to customize your Tibet tour.

The followings are our most popular Tibet local tour packages that are available to Indonesian tourists to join in all year round. From 4-day brief stay in Lhasa to 15-day in-depth tour to EBC and Mt.Kailash, a wide range of the hottest small group tours are readily available for our Indonesian tourists. If you are on a budget or enjoy travelling with like-minds tourists, our well-designed Tibet local tour packages are your best option. Join us for an once-in-a-lifetime experience in Tibet.

The highly-developed rail system and multiple airlines in China make Tibet tour increasingly easier. With time permitting, many Indonesian may opt for a longer journey across China Tibet and Nepal. To meet your need, we offer you the top-rated China Tibet Nepal tour packages for you. You may easily tour your favorite Chinese cities and later choose either Tibet train or flight to Tibet. After your Tibet tour is done, you can further travel to Nepal for a visit or move back to other Chinese cities before flying back home. Our tourist-friendly booking and local service will ensure you a hassle-free travel amid China, Tibet, and Nepal.

How to Get to Tibet from Indonesia? Multiple ways to travel from Jakarta to Tibet.

Travelling from Indonesia to Tibet is easy. Fly from Jakarta to mainland Chinese cities or Kathmandu. Then change flight, enjoy Tibetan train or overland road trip to Lhasa, Tibet. Just as simple as that. Please follow the useful travel tips below to navigate your way. 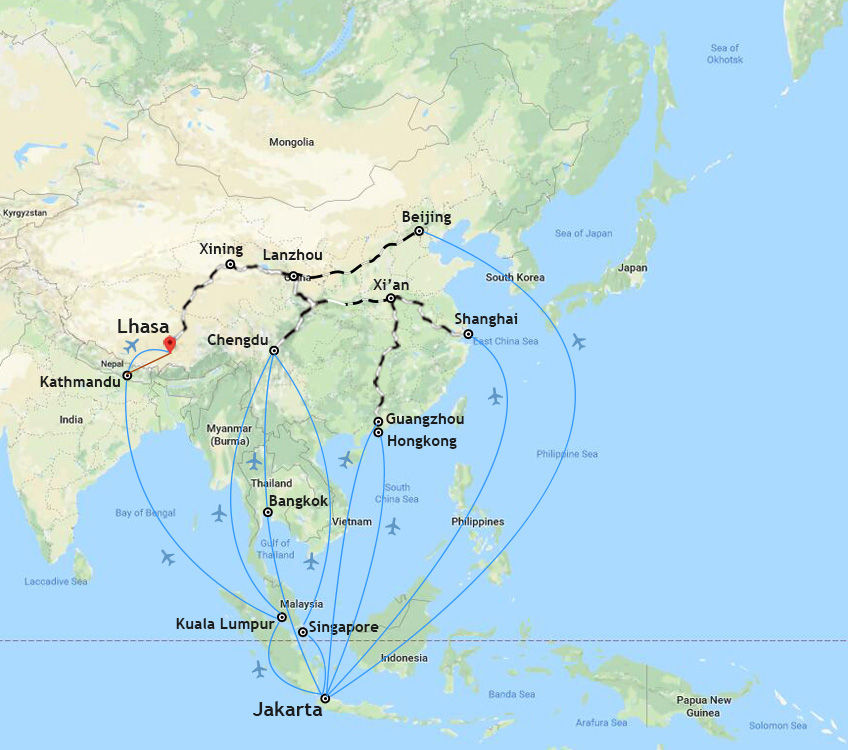 You may plan your travel far ahead of your actual departure and check online to get the best deals for your favorite flight. Multiple air routes are available. You can take flight from Jakarta to Beijing, Shanghai, Guangzhou, Chengdu, and HK and Kathmandu.

Normally, after we get your Tibet Permit from Tibet Tourism Bureau, we will deliver it by express to your hotel in China from Lhasa. After you get it, you can board the domestic flight or Tibet train to Tibet.

By flight
There are two direct flights (one by Air China and the other by China Southern Airline) a day from Beijing to Lhasa with a stopover in Chengdu and it takes about 5 hours to go from Beijing to Lhasa. The flight flies from Beijing in the morning and arrive in Lhasa in the afternoon. Air tickets cost usually 395USD including airport tax during peak travel seasons.

By flight
It takes around takes 6 hours to fly from Shanghai to Tibet via China Eastern Airlines with a cost of around 445USD for one way including airport tax and this flight is always at full fare all year around. The exact amount of flight prices are best confirmed by the airline you book. There are three direct flights a day flying from Shanghai to Lhasa, operated by China Eastern Airline, Tibet Airline and Air China. It usually takes 7 hours to travel from Shanghai to Lhasa by plane, in which about 1 hour is for stopover at Chengdu or Xi’an.

By train
Z164 (return Z166), as one of the early three railway links with Tibet, connects Shanghai with Lhasa. The railway line covers 8 provinces from east to west China and has 4373 km in total. It normally takes about 47.34 hours to reach Lhasa from Shanghai. As the train travels amid mountainous range, conductors of each compartment of the train will use Chinese, Tibetan Language and English to introduce renowned scenic spots along the railway line as well as Tibetan customs and making of Tibetan dishes, etc.

By flight
At present there are three direct flights with a stopover in Chongqing flying from Guangzhou to Lhasa, operated by China Eastern Airlines, China Southern Airlines and Xiamen Airlines. Guangzhou Lhasa flight takes off from New Baiyun International Airport and arrives at Lhasa Gonggar Airport every day. It takes about 6 hours for these direct flights to Tibet and about 1 hour for stopover at Chongqing.

By train
Guangzhou to Lhasa(Z264) train departs every other day at noon from Guangzhou Train Station, and arrives at Lhasa Railway Station in the late afternoon on the third day after over 53 hours covering a distance of 4980 kilometers. It’s the longest train journey across Tibet. If you are a railfan, it’s highly recommended. Yet, the long journey might be too hard for kids and the elderly.

Due to proximity of Nepal to Tibet, travelling to Nepal first and further entering Tibet from Nepal either by flight or epic Kathmandu to Lhasa is also a viable option to many Indonesians.

Jakarta to Kathmandu (Duration: 18h58m, with 1 stop in BKK, KUL, IST)
Further into Tibet from Kathmandu

There are 2 direct flights between Lhasa and Kathmandu, run by Sichuan Airline and Air China separately, while the Sichuan Airline departs every other day. The flight takes around 1h30min. Do remember to choose the left window seat on the plane, you can enjoy the stunning bird’s eye view of Mt. Everest when the plane flies over the majestic Himalayas. To board the place, you need Group tourist visa. And after your arrival in Lhasa Gonggar airport, our Tibetan guide will be expecting you with white Hada and Tibet Travel Permit.

Compared with flight, enjoying the epic overland tour from Kathmandu to Lhasa is much preferred by many tourists. Our staff will transfer you to Gyirong Port, current Sino-Nepal border, and after you go through the customs (your group tourist visa and Tibet permit will be checked.), our Tibetan guide will be greeting you on Tibet’s side. Due to the drastic altitude ascent, you will stay in Gyirong county for acclimation and gradually move eastward to visit Tingri, EBC, and Shigatse and finally arrive in Lhasa. The classic travel route abounds with jaw-dropped Himalayan peaks, magnificent Buddhist monasteries and holy alpine lakes and unlimited chances to meet local Tibetans and explore their exotic culture and custom.

Having said so much, if you have more questions concerning the your actual travel from Indonesia to Tibet or specific preferences of your upcoming Tibet tours, please feel free to send us your inquiry and contact our professional travel consultants for Free Consultancy.

If you are planning to enjoy a trip to Tibet from Indonesia, yet have no ideas of how to sort it out the details, no worries! We would like to hear your tour plan and offer free professional consultancy and viable solutions. Please feel free to contact us.