Getting to Tibet for an Indian tourist is probably the easiest of all the nations that travel regularly to the region. As India is one of China’s main neighbors, getting to Tibet requires very little actual effort, and for tourists there are several ways to travel to Tibet, the most popular being through Kathmandu, both by flight from Tribhuvan International Airport and overland via Gyirong Port. Flights to Nepal, Beijing, Shanghai, Chengdu, etc., run frequently, and are inexpensive, making Tibet an easy place to get to.

For Indian tourists to Tibet, the Tibet Travel Permit is a must, and can only be obtained through a registered local Tibet travel agency. It is advisable to apply for the permit as early as possible, as it can take around 15-20 days to process with the Tibet Tourism Bureau. Applications require your passport photocopy, and for those traveling through China, a photocopy of the visa page as well. For our clients, we offer Tibet Permit service for free. Once approved, the permit will be delivered to your hotel in China, ready for you to travel to Tibet.

For those wishing to visit holy Mount Kailash, it must be done through the Pilgrim Center, as regular Tibetan tour operators cannot organize pilgrimage tours. But, we can help you contact the relevant department for application.

Most Popular Tibet Tour from India

For Indian tourists, starting with a tour in China, then heading to Tibet and into Nepal is the adventure of a lifetime, and is a great way to visit India’s closest neighbor. Crossing the vast expanse of the Chinese mainland, giving the options of visiting some of China’s most famous and most ancient cities and sites is a wonderful opportunity, before heading to the high plateau and the sacred land of Tibet. Then it is across the plateau to another Himalayan Kingdom Nepal.

How to Get to Tibet from India? Multiple ways to travel from Delhi to Tibet.

Flights leave daily from Indira Gandhi International Airport in Delhi for Beijing, Shanghai,Guangzhou, and Hong Kong, while there are indirect flights to over 100 different airports across the country. However, there is no direct flight to Tibet from India. 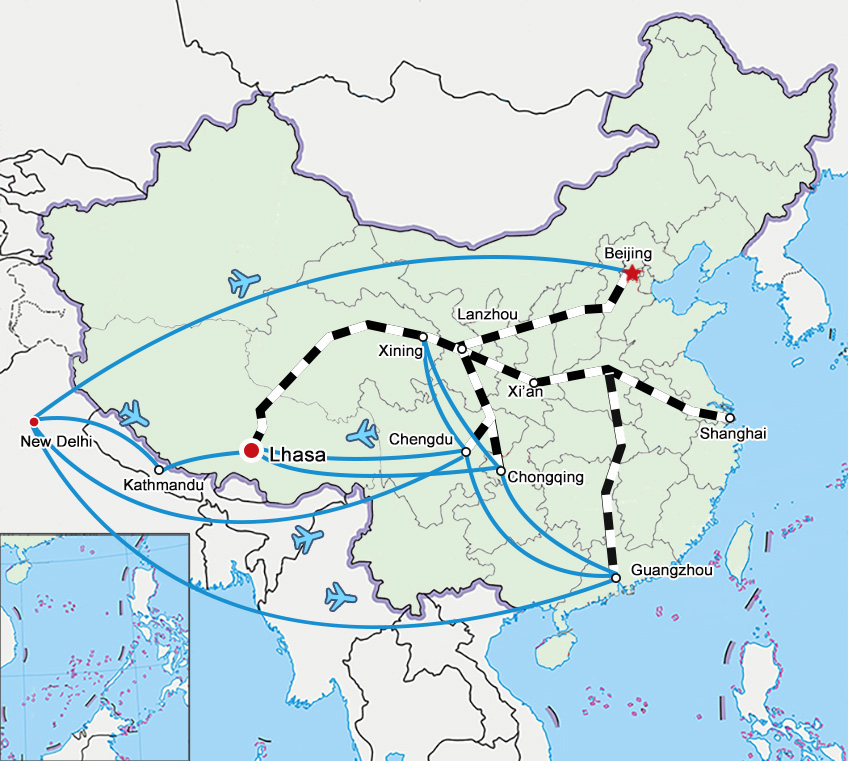 Flights to China from India are frequent, and can be found for a relatively good price using the many comparison websites available to get the best deal. The average flight times are:

After you arrive in China, you will receive your Tibet Travel Permit expressed to your hotel, ready for your tour of the Tibetan plateau. The permit is needed to book and board the flights or trains to Tibet, and is also required when checking into hotels and at the various checkpoints across the region.

Delhi to Kathmandu is a flight of only 1 hour 45 minutes, and costs from around US$ 67, or around 4,300 INR. Flight costs are cheaper from India due to the closeness of the two countries, and the short flight times. Nepal is also a preferred gateway to Tibet for Indian passport holders, as there is free travel between India and Nepal and they do not need a passport or visa to enter Nepal, merely their government-issued ID cards.

By the Epic Overland Tour from Kathmandu to Lhasa
Traveling overland from Nepal to Tibet is an incredible journey that takes one from the lowland valley of Kathmandu to the heights of the mighty Himalayas, passing near Everest and the most sacred of mountains for Indian Hindus, Mount Kailash. Then it is on across the plains and prairies, crossing high mountain passes and passing by shimmering lakes, to the holy city of Lhasa, the center of Tibetan religion and culture. Driven across the plateau by the required driver in a comfortable four-wheel drive vehicle, you will get time to see some of the most amazing sights of the plateau and enjoy the views of the stunning landscape and spectacular scenery.