Travel to Tibet from France

Getting to Tibet from France requires as many as two to three stops, depending on whether your flight from Paris’ Charles de Gaulle Airport is direct to China or Kathmandu. Direct flights are available from Paris to Beijing, Shanghai, Guangzhou, and Hong Kong, all of which are perfect for getting to Tibet. If you are traveling through Nepal, there are only indirect flights to Kathmandu, which have one stop in Istanbul, Delhi, or Dubai.

All tours to Tibet must be booked through a tour operator and independent travel in Tibet is not permitted. Once you have booked your tour with us, we would offer Tibet Permit service for free. We will make the application for the Tibet Travel Permit using your photo image of Chinese Entry Visa and passport photocopies and the photo image of yourself, and after we get your Tibet Permit in Lhasa we will send it to your hotel in China ready for your tour. Do start preparing your Tibet Permit at least 20 days before.

As the best choice of tour operator according to TripAdvisor, and one of the biggest tour operators in Tibet, we have a number of small group join-in tours that you can join as an individual. The small group Join-in tours are made up of other overseas tourists traveling on the same route at the same time. Covering tours from four to fifteen days, these group join-in tours are ideal for people traveling alone or on a budget. You can travel with like-minded international tourists. Some of the most popular itineraries, ranging from 4-day Lhasa tour and most popular Lhasa to EBC tour and Mt. Kailash tour, etc. are highly recommended.

With a network of roads and railways that extends the entire length of China, and into Tibet, and the roads that run across Tibet to Nepal, including all three destinations in one tour is easily possible. A package that covers China, Tibet, and Nepal is the ultimate in Southeast Asian tours, and can easily include the most popular cities in all three places. We can customize the package to suit your needs, and booking through us can make your tour hassle-free and convenient, allowing you to focus on enjoying your trip.

How to Get to Tibet from France? Multiple ways to travel from Paris to Tibet.

Getting from Paris to Tibet can be done in a number of ways, flying either to mainland China or Nepal, and then choosing from flights, trains, or overland travel to get to Lhasa, the Tibetan capital. In order to better assist you, there are details on each step below, and you can combine the steps depending on your preferred route. 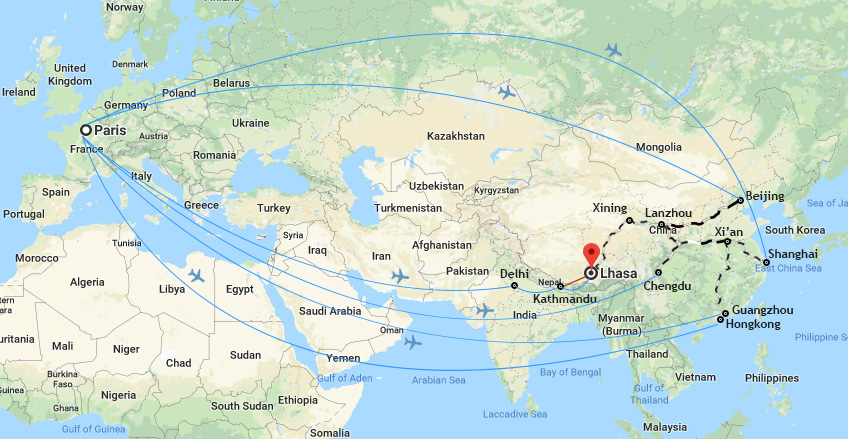 Flights to China from Charles De Gaulle Airport in Paris are frequent, and can be found for a relatively good price using the many comparison websites available to get the best deal. The average flight times are:

Once you arrive in China, your Tibet Travel Permit will be delivered to your hotel in your destination city by express delivery, ready for your trip to Tibet. In some extreme cases, our staff will give it to you in person at the airport or railway station. The permit is required to board the flight or train to Tibet, and is also used for hotel check-ins and checkpoints across Tibet.

From Hong Kong, there is no direct flight to Lhasa, so you will need to make a connection to get there. One of the most popular ways is to take a flight to Chengdu, and then transfer to Lhasa from there. You can also take the train from Chengdu, which takes around 44 hours. Alternatively, you can get the train direct from Kowloon Station in Hong Kong SAR to Guangzhou, and get the connecting train direct to Tibet from there, which is an amazing journey covering almost 5,000 kilometers.

If you are traveling through Nepal, there are only indirect flights to Kathmandu, which have one stop in Istanbul, Delhi, or Dubai. Flights can take from around 13 hours to get to Nepal, and cost from around US$ 494 for an economy ticket.

By Kathmandu to Lhasa flight
Flights to Lhasa from Kathmandu leave daily and are provided by Air China, Sichuan Airlines, and Tibet Airlines. The flight takes around 90 minutes, and costs from around US$ 400, depending on the season. One of the advantages of the flight from Kathmandu is that it crosses the Himalayas and gives passengers a great bird’s-eye view of Mount Everest.

By the Epic Overland Tour from Kathmandu to Lhasa
Traveling overland from Kathmandu to Lhasa is an adventure of epic proportions, starting with your transfer to the Sino-Nepal border crossing at Gyirong Port by our agents in Nepal. After you have passed through immigration, your guide and driver will pick you up and you will start your tour on the roof of the world. Following a route that is agreed when you book your tour, your guide will take you to all the places you want to visit. Filled with astounding sights, spectacular monasteries, stunning lakes, and the unique and friendly experience of locals in Tibet, your tour from Kathmandu to Lhasa will be the ultimate in travel experiences.