Shigatse Peace Airport is the fifth civilian airport in Tibet, opened on 30 October 2010. It is a dual-use military and civilian airport serving Shigatse, the second-largest city in Tibet Autonomous Region, China. Construction of Shigatse Airport started in 1968 and was completed in 1973. It was solely for military use until 2010, when a 532 million yuan expansion was completed.

Now, an increasing number of tourists who ends their Tibet tour choose to fly to inland from Shigase, especially after Mount Everest tour. In addition, Shigatse is the second-largest city in Tibet, with the arrival of the peak tourist season, Lhasa, as the capital of Tibet, will be packed with tourists here and there. Therefore, flying to Shigatse is absolutely the best choice. However, Shigatse Peace Airport is a dual-use military and civilian airport, so there are only several flights to Shigatse from Chengdu, Xi’an, and Shanghai mainly operated by Tibet Airlines and Air China. The following is the details for your reference. 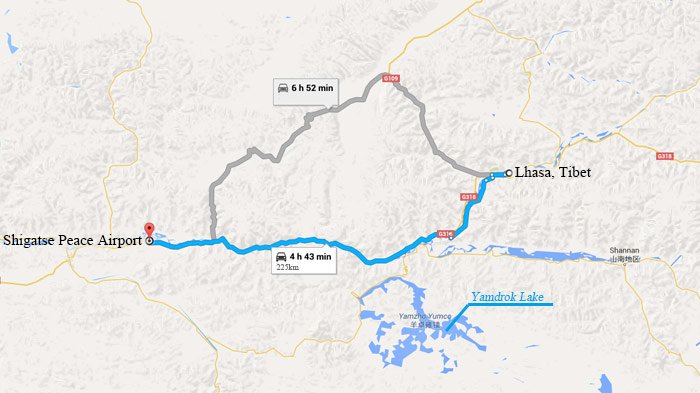 Lhasa city is 225km away from Shigatse Peace Airport.

The airport has a 5,000 meter runway with a 60-meter asphalt overrun at each end. It also features a 4,500 square-meter terminal building. It is projected to handle 230,000 passengers and 1,150 tons of cargo annually.

Shigatse Peace Airport is located in Jiangdang Township, 43 kilometers from Shigatse and 225km from Lhasa. It takes about 1-hour ride from Shigatse Peace Airport to Shigatse Downtown. The first way is to take an airport shuttle bus via Airport Expressway, the second is to take a taxi, the cost is higher but more convenient, surely, the pricing can be negotiable by yourself. To avoid the crowds and save time, many people will join a Mount Everest tour from Lhasa, and then, come back to Shigatse to depart. Getting to the airport also has there two ways, but you need to pay attention to the departure time from the downtown, the details can be checked by the local transportation company.

After visitor’s arrival to Shigatse, Tashilhunpo Monastery is the first place where one wants to visit at once, but there is a question about how to get to the monastery from Airport. In actual fact, Tashilhunpo Monastery is in Shigatse Downtown, reaching the downtown at first, you can walk along the street to the Monastery. After visiting here, continuing to visit Everest Base Camp is quite reasonable. From here, we recommend you join an EBC tour group by the local Tibetan travel agency, just like Tibet Vista. We will assist you to manage.

As the second-largest city in Tibet, Shigatse is the traditional seat of the Panchen Lama. Owing to the most important political and cultural center of Tsang in the past, it is not strange why so many people are keen on paying a visit. A series of majestic buildings, especially the monasteries, with their mystery and rich holy color tell the history of Shigatse and show the status of Buddhism in people's lives. In addition to the Buddhist cultural relics, there are many special types of natural scenery like Mt. Everest.

Tashilhunpo Monastery, founded in 1447 by the 1st Dalai Lama, is one of the four Monasteries of Gelugpa (or Yellow Hat Sect) in Tibet. The full name in Tibetan of the monastery means "all fortune and happiness gathered here" or "heap of glory". The monastery is the traditional seat of successive Panchen Lamas, the second highest ranking Tulku lineage in the Gelug tradition of Tibetan Buddhism. It is located at the foot of Drolmari (Tara's Mountain), Shigatse, about 8km from Shigatse Train Station, if you get there at a proper time, it may be lucky for you to witness the pilgrims circumambulate the monastery on the Lingkhor outside the walls. 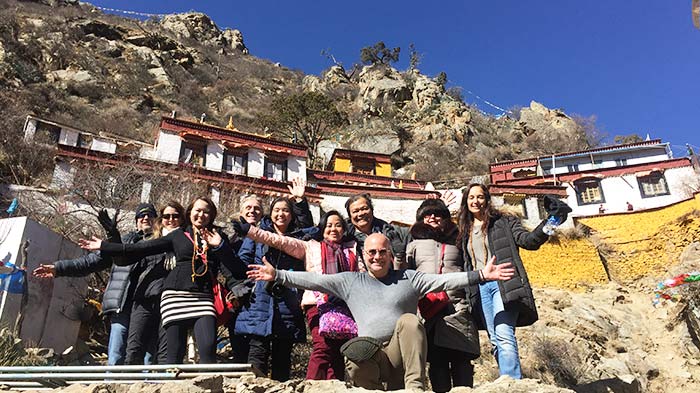 There are two Everest Base Camps in the world, South Base Camp is in Nepal, North Camp is in Tibet. Trek to Everest Base Camp is one of the most adventurous tours for trekkers. However, it is also a dreamed journey. Everest Base Camp is generally as a beginning place to climb Mount Everest, but it is extremely difficult. Before the trekking tour, you need to prepare your belongs, covering trekking gears, clothing, and First-Aid due to this high altitude (5200m), apply for the necessary permits, including Tibet Travel Permit. Certainly, we will also help you prepare the permits and some packages. You just need to enjoy the stunning landscape of the epic Mount Everest. If there is still any question, please contact us, we will offer the best service for you.

Located in Gyantse, Gyantse County, about 100km east of Shigatse, Pelkhor Choede (Palkhor Monastery or Palcho Monastery) is a typically Tibetan monastery. The monastery precinct is a complex of structures which, apart from the Tsuklakhang Monastery, also covers its Kumbum, believed to be the largest such structure in Tibet, that is most famous for its 108 chapels in its several floors and the old Dzong or fort. Kumbum is the landmark of this monastery with nine floors, and each one has unique chapels with exquisite images. The monastery is in the central county, thus you just stop and visit it when passing by from Lhasa to Mount Everest.

The Sakya Monastery is located in Sakya County, about 127 km west of Shigatse on the road to Tingri in Tibet, which is the principal monastery of the Sakyapa Sect of Tibetan Buddhism. Also, it is known as Pel Sakya, in Tibetan, its name means “White Earth” or “Pale Earth”. Its Mongolian architecture is extremely different from that of temples in Lhasa and Yarlung. The only surviving ancient building is the well-preserved Lhakang Chempo or Sibgon Trulpa. It houses some of the most magnificent surviving artwork in all of Tibet. Strolling inside, you will experience rich Tibetan Buddhism, appreciate lots of colorful and vivid frescos on the wall. 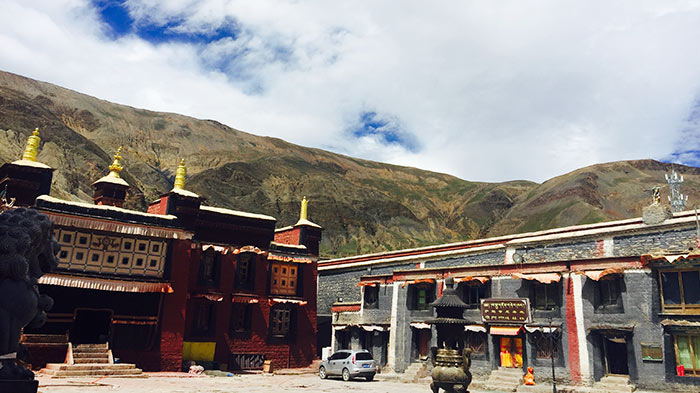 Gyantse Dzong, also called Gyantse Fortress, is one of the best-preserved Dzongs in Tibet, perched high above the town of Gyantse on a huge spur of grey-brown rock. Due to the determined resistance of the Tibetans against far superior forces during the British expedition to Tibet of 1903 and 1904, Gyantse is often referred to by the Chinese as the "Hero City". Now, the Gyantse Dzong is still a base for patriotic education. Here, not only can you bask in the plentiful Tibetan Culture, but also the National integrity.

Lies near the base of the north side of Mount Everest at 4,980 meters (16,340ft) above sea level, Rongbuk Monastery, just about 8km away from Everest Base Camp, is claimed the highest monastery in the world. Seen from here, Mt. Everest appears like a lofty pyramid surrounded by high mountains that touch the sky. On sunny days, a pile of thick clouds, just like a white flag floats lightly above the peak, which is known to be the miracle of 'The Highest Flag Cloud in the World'. It is also one of the best places to take photos of Mount Everest.