With an elevation of 3,650 meters (11,975 feet), Lhasa Gonggar Airport is one of the highest airports in the world. It was built in 1965 and put in operation in 1968, becoming the first airport in Tibet. The airport is provided with a runway of 4000 meters and terminal facilities upgraded in 2004. Built in the wide valley of Yarlung Tsangpo River (also called the Brahmaputra River) on the right bank (southern bank), the airport can handle the launching and landing of Boeing 747, Airbus A340 and other Large Aircrafts.

Surrounded by green mountains, Lhasa Gonggar Airport is about 63.8 kilometres from the downtown Lhasa. And it takes about 1 hour and 30 minutes to ride from the airport to Lhasa. Since it is located in the Gonggar county and serves as a 4E-level civil airport for Lhasa, the airport is also called Lhasa Airport, Gonggar Airport, or Lhasa Gonggar International Airport. 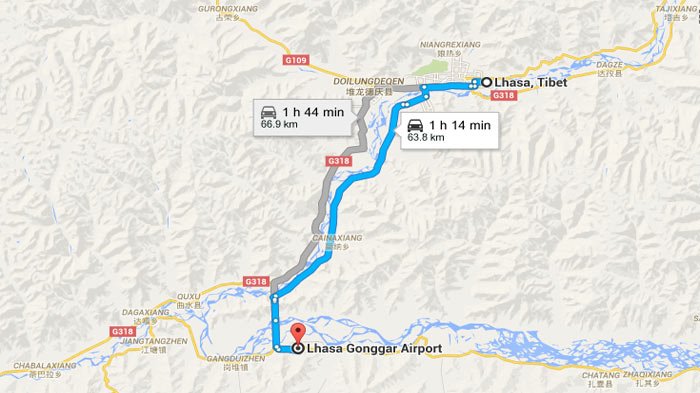 Lhasa Gonggar Airport is around 63.8 kilometres from the downtown.

The airport has an area of 25,000 square metres. And it is equipped with the passenger handling facilities of ticketing office, the baggage collection beltways and visitors’ gallery on the first floor of the new terminal building, and the departure lounge on the second floor with shopping malls, kiosks and restaurants. And there are several hotels such as Jardin Secret Hotel Lhasa and New Century Lhasa Hotel.

As the leading and the first airport in Tibet, Lhasa Gonggar Airport is provided with plenty of flights to Tibet connecting both domestic cities and overseas destinations. Tourists now can fly to Lhasa from the major gateways cities in China, including Beijing, Shanghai, Guangzhou, Chengdu, Chongqing, Xian, Kunming, Nanjing as well as the Shangri-La of Tibet. Direct flights are available every day during the peak season, with some even up to dozens of flights per day. And there is one international flight to Lhasa, the flight from Kathmandu to Lhasa, providing much convenience for tourists who travel to Tibet from Nepal.

Note:
1. Since the flights to Ngari are greatly affected by climate and seasonal change, the above schedules are just for your reference based on the peak season. Please contact us for the detailed airfare and schedule.
2. The above duration just refers to the fastest flight time to Lhasa from each city.

It is quite convenient for tourists to transfer between Lhasa Gonggar Airport and the downtown Lhasa. Firstly, there are shuttles buses waiting at the airport. It takes 40 to 60 minutes to shuttle between the airport and the downtown. Normally, the buses serve from the early morning to late night, leaving about every 30 minutes based on the flight time. The ticket price for one way is 25 RMB per person.

Additionally, you can also take a taxi. The price from Lhasa Gonggar Airport to Lhasa is about 130 RMB to 200 RMB and it takes about 45 minutes. But if you travel to Tibet in peak season, the price needed for taxi will also be much higher. Compared with the shuttle bus, taking the taxi is indeed much more expensive, however you can go anywhere you want by this way.

For your convenience, we provide the free shuttle service for tourists between the airport and your hotel, as long as you book your Tibet tour with us. As the leading Tibet tour operator, we offer various classic Tibet tours tailored for our clients. Upon your arrival in the airport, you will be warmly welcomed by our local guide and then be transferred to the reserved hotel.

Meaning “the holy land” in Tibetan language, Lhasa is the political and economic religious center in Tibet. With azure sky and clear water, fresh air and warm sunshine, Lhasa is a popular destination attracting tourists from all over the world. If you are planning a Lhasa tour, check the following top places which you should never miss, and be prepared to get a real contact with this mysterious and charming city.

The Potala Palace is the highest and most majestic place in the world, also the most important symbol of Lhasa and Tibet. It is mainly composed of the Red Palace and the White Palace. The highest Red Palace sitting in the middle is an important venue for religious ceremonies. The surrounding White House is the location of Dalai Lama's daily life and political activities. 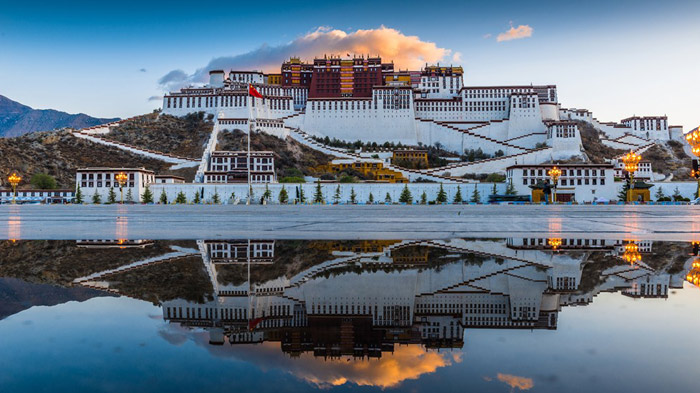 As the “eyes of Tibet”, the Jokhang Temple has a supreme position in Tibetan religious culture and has always been the center of all kinds of major Buddhist activities. There are incessant people coming to this place for worships every day. When visiting the Jokhang Temple, remember to ascend to the platform on the third floor, which is a good place to look at the Potala Palace and overlook the square in front of Jokhang Temple.

Located in the Old Town, Barkhor Street is Lhasa’s most famous pedestrian lane and commercial center. There will always be Tibetan worshipers on the streets, and Tibetan shops are also indispensable. The shops sell various Tibetan costumes and handicrafts, as well as goods from India, Nepal and other places. The natural cuisine is also indispensable, and many Lhasa restaurants are located here, allowing you to taste all kinds of Tibetan cuisine.

All the three attractions above-mentioned are in the downtown of Lhasa city and are quite close to each other. Upon your arrival at Lhasa Gonggar Airport, you can directly transfer to Potala Palace from the airport, by taxi or by bus. If you take a taxi to Potala Palace from the airport, you will spend about 150 RMB to 250 RMB, and it will take about 1 hour. If you choose the airport shuttle bus, you can get off at the Lhasa Civil Aviation Bureau Station, which is right on the eastern side of Potala Palace. Or you can get off at Aviation Hotel Station, from where you can walk directly to the Jokhang Temple. However, it is suggested to first get to your hotel for a good rest, so that you can better acclimatize yourself to the plateau environment in Tibet.