Paro Airport: the major air hub linking Bhutan to the outside world

The only international airport in Bhutan, Paro International Airport is one of four airports in the kingdom, and lies just six kilometers from the center of Paro Town in the Paro Valley of Paro Dzongkhag. Surrounded by high peaks up to 5,500 meters, it is rated as one of the world’s most challenging airports for landings. Only a selected number of specially-trained pilots are permitted to fly the aircraft into the airport, and all flights are restricted to daytime hours only, from sunrise to sunset. The only airport in the kingdom until 2011, it is easily accessible by road from both Paro and the Bhutanese capital of Thimphu, which lies around 54 kilometers to the east of the airport.

History of Paro Airport in Bhutan

The first airstrip at the location of the Paro Airport was built in 1968 by the Indian Border Roads Organization. The airstrip was originally only intended for use by on-call helicopter operations by the Indian Military on behalf of the Bhutanese government, and was not used for commercial flights for another 13 years.

The airport lies in a deep valley, and the first runway that was built was just 1,200 meters long. This meant that only 18-20 seat Short Take Off and Landing (STOL) aircraft could be used, but would have to be able to climb at a high rate due to the high mountains, and fly from Paro to Kolkata without refueling. The first 18-seat Dornier 228-200 was ordered in January 1983, and landed at the airport on January 14 of the same year. The flight was predetermined by the high lama of Paro Dzong so as to be set around auspicious dates and times for good fortune. 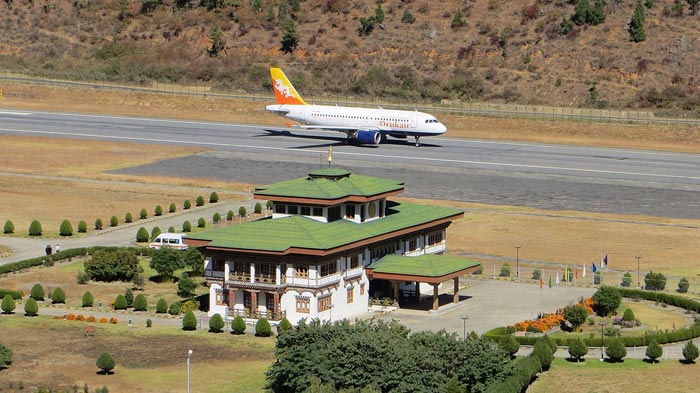 The first inauguration flights by Drukair, the flagship carrier for Bhutan, ran on February 11, 1983, departing for Kolkata and returning the following day. At the time of the flight, the airport facilities consisted of the runway, a small air-traffic control building on the ground floor, which doubled as the check-in counter, and the departure lounge, which was the lawn outside the building. The airport runway was lengthened in 1990 to allow larger aircraft, and a hangar was built to house the two planes of Drukair, which was funded by the government of India.

In November 1988, the first jet, a Bae 146-100 was delivered to Paro Airport, and went into service from December 1988 to October 2003, when it was replaced by the carrier’s first Airbus A319-100. In December 2011, Tashi Air, the first private airline in Bhutan, began operations out of Paro Airport, operating as Bhutan Airlines, and by the end of 2012, it was reported that more than 180 thousand passengers had passed through the airport throughout the year. The terminal building was updated in 1999, to include a better air-traffic control building, as well as a separate building for check-in and departure lounge.

Paro International Airport lies just outside the town limit of Paro, at the coordinates 27°24′32″ North and 089°25′14″ East. Located on the banks of the river, Paro Chhu, the airport lies at an altitude of 2,235 meters (7,332 feet) above sea level, and is surrounded by mountains of up to 5,500 meters above sea level. The physical address for the airport is listed as being at Airport Road, Paro, 12001, Bhutan, and the designated codes for the airport are:

International Air Transport Association (IATA) code, which is the three-digit code that is the location identifier for every airport in the world: PBH
International Civil Aviation Organization (ICAO) code, which is the four-digit identification code that acts as a location indicator for aerodromes around the world, which often includes small airfields that do not handle goods or passengers: VQPR

Owned by Tashi Air Pvt. Ltd, and operating as Bhutan Airlines, this was the first and now only private airline that was permitted to use Paro International Airport and provide flights to the kingdom from international locations. The IATA code is B3 and the ICAO code is BTN, which designates the airline as having the callsign of “Bhutan Air”. Currently, the airline operates domestic flights between Paro, Jakar, and Trashigang, and international direct flights to Paro from New Delhi, and Kolkata in India, Kathmandu in Nepal, and Bangkok in Thailand.

The first and flagship airline of Bhutan, the Drukair Corporation Limited is the company that trades as Drukair - Royal Bhutan Airlines, and is headquartered in Paro Dzongkhag in Bhutan. Founded in 1981, seven years after the first visitors were welcomed as tourists to Bhutan, the airline began operations in 1983, with flights to Kolkata and back. The IATA code is KB and the ICAO code is DRK, which designates the airline as having the callsign of “Royal Bhutan”. Currently, the airline offers domestic flights between Paro, Jakar, Gelephu, and Trashigang, and international flights to and from India, Thailand, Bangladesh, Nepal, and Singapore.

Paro International Airport is not the most modern airport in the world, and has two simple buildings, one for the air traffic control tower and one for the check-in desk and departure lounge. However, the departure lounge building does have a small variety of restaurants and shops where you can get simple food and buy a few necessities if you forgot to bring them with you.

All travelers except Indian citizens are required to have certain documents at the time of arriving at Paro International Airport. In order to quickly and properly enter the kingdom, you will need to have your valid passport, the visa approval letter, and the booking confirmation of your Bhutan tour. Once you arrive, the visa will be stamped into your passport.

Paro Airport lies around 6 kilometers outside the city itself, and while there is not much at the airport itself, there are some interesting sites around the outskirts of the airport. As well as having some nice hotels and resorts nearby, to the south of the main gate of the airport lies the Namgay Artisanal Brewery. The only brewery in the world to make Red Rice Beer, it is one of the best breweries in Asia, and has been brewing many different styles and types of beer, including the Red Rice Beer, Bhutanese Buckwheat Beer, and a nice-tasting Bhutanese Dark Ale. 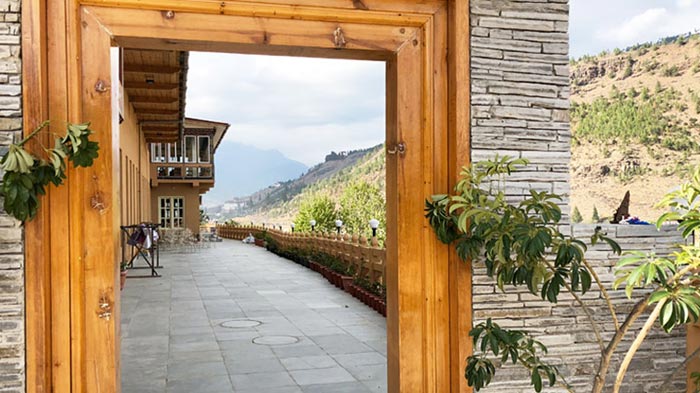 Namgay Artisanal Brewery is one of the places to see around Paro International Airport.

To the bottom end of the runway lies a beautiful small Lhakhang, the Bongdey Lhakhang, which it is said is a tranquil place to worship for travelers heading into and out of the airport. Small and set in its own little grounds beside the Paro-Thimphu Highway, this tiny Goemba has a very old statue of the Guru Rinpoche as an ancient relic.

While you may not need to stay in them, since the tour operator arranges all your hotel accommodation for your tour in Bhutan, there are several nice hotels within walking distance of the airport. To the northwest, you have the Hotel Drukchen, and the Khangu Resort Hotel, while on the other side of the entrance, to the northeast, there lays the beautiful and traditional Hotel Tashi Phunshok. In the hills to the east of the runway, there is also a COMO hotel, known as the Uma by COMO Paro, which has excellent facilities and clean comfortable rooms.

How to get from Paro Airport to the city center?

The center of Paro lies around 3-4 kilometers to the north of the airport, on the banks of the Paro Chhu. While your guide and driver will be taking you there once your flight arrives and you get out of the immigration, getting to the city center is simple. As you leave the terminal building, turn north along the airport road that follows the river to the bridge, and follow across it and turn north again. Follow the road, and it will take you straight into the center of Paro.

Paro Airport may not be the most well equipped or largest airport in the world, but that only adds to the charm of landing in a country where being happy is more important than creating a viable product for sale to the international market. Bhutan is a beautiful and unspoiled land where traditions that have existed for thousands of years are still followed, and where too much modernization will ruin what is possibly the most beautiful place on the planet. Paro Airport does the job it is designed to do, bring you to this stunning location so you can see for yourself exactly what all the fuss is about.

0 Comment ON "Paro Airport: the major air hub linking Bhutan to the outside world"