Oceania to Bhutan Flights: how to get to Bhutan from Australia and New Zealand by Air?

A vast continent to the southeast of Asia, Oceania comprises of four main regions, Australasia, Melanesia, Micronesia, and Polynesia, and lies to the southeast of the Asia-Pacific region. Australasia consists of the countries of Australia, New Zealand, and Papua New Guinea, as well as a few islands to the north and east in the Pacific Ocean. For most Australians and New Zealanders, getting to South Asia is not as hard as it can sometimes seem, despite it being a lot further than it looks on a map.

Flights from Australia to Bhutan can only be done as connecting flights, as there are no direct flights to the ancient Himalayan kingdom. Travelers heading for Bhutan have to transit through one of nine airports in five Asian countries to get to Bhutan, as there are only limited flights to the kingdom. Only two airlines are permitted to run flights to Paro International Airport in Bhutan, and both are Bhutanese-owned airlines. Drukair, the first airline in Bhutan, is the national carrier and flagship airline for Bhutan, while Bhutan Airlines is the second airline and the first and only privately-owned airline in Bhutan.

Brisbane to Bhutan Flights: how to fly from Brisbane (BNE) to Paro (PBH)

Brisbane Airport is the main airport that serves the area of Southeast Queensland in Australia, on the east coast, and lies around 8 kilometers to the northeast of the city center of Brisbane. Flights from Brisbane go to a huge number of cities across the world, including Singapore and Bangkok, two of the nine gateway airports for Bhutan. Flights from Brisbane to Singapore depart daily, taking around eight hours to cover the 6,153 kilometers to the city state. The flight costs around US$288 per person. Flights from Brisbane to Bangkok, a distance of 7,288km, take around 9 hours and cost from around US$454 per person.

However, since the flight from Singapore to Bhutan is costly, at more than US$1,100, it is actually cheaper to get an indirect flight to Bagdogra, the cheapest airport for direct flights to Bhutan. While the flight to Bagdogra does take around 28 hours, with 2-3 stops, this 9,179-kilometer flight costs just US$429 per person, cutting the cost of the fare to Bhutan down to only US$553 per person, from the costly price of US$1,473 per person when flying through Singapore.

And when you add the cost of the flight to Bhutan from Bangkok to the fare from Brisbane to Bangkok, the fare rockets up to around US$984 per person, making Bagdogra the best option for cheaper flights from Australia to Bhutan for those on a budget.

Sydney to Bhutan Flights: how to fly from Sydney (SYD) to Paro (PBH)

The Sydney (Kingsford Smith) Airport in southeast Australia lies in the suburb of Mascot, around eight kilometers to the south of the city center. Flights from Sydney run to the gateway cities of New Delhi, Singapore, and Bangkok, Flights to Bangkok take around 9-10 hours to cover the 7,541km and cost from around US$388 per person. Singapore flights, which take around 8 hours to cover the 6,303km distance, cost around US$287 per person for an economy flight. And the flights to New Delhi from Sydney take 12-13 hours and cost from US$453 for the 10,434km flight.

An indirect flight to Bagdogra for the connection to Bhutan costs from just US$370 to US$436 per person for the 19-30 hour flight, which once again makes it the cheapest option for budget travel.

Canberra to Bhutan Flights: how to fly from Canberra (CBR) to Paro (PBH)

Canberra Airport, in New South Wales, lies around eight kilometers from the city center in the North Canberra District and only has daily flights to one gateway airport for Bhutan, Singapore. Flights to Singapore cost from around US$310 per person for the 6,220km flight, which takes around 8 hours 10 minutes. With the expensive flights from Singapore to Bhutan, the better option for a cheaper trip is getting an indirect flight to Bagdogra, the cheapest airport for Bhutan flights. Flights to Bagdogra can take up to 40 hours, but can also cost as little as US$553 for the 9,403km flight.

Melbourne to Bhutan Flights: how to fly from Melbourne (MEL) to Paro (PBH)

Melbourne Tullamarine Airport in Melbourne, Victoria, lies around 23 kilometers to the northwest of the city center and provides direct flights to Delhi, Singapore, and Bangkok. Flights to Singapore cost from US$128 for the eight hour flight, covering a distance of around 6,041km. Flights to Bangkok take around 9 hours for the 7,356km flight, and cost from around US$396 per person. And flights to Delhi in India, a distance of 10,363km, take around 12 hours 30 minutes and cost from US$454 per person.

If cost is a concern, the flights to Bagdogra cost from only US$354 per person, for a 23-37 hour indirect flight. The total cost to Bhutan via Bagdogra starts at around US$480 per person.

Perth to Bhutan Flights: how to fly from Perth (PER) to Paro (PBH)

Serving the capital city of Australia, Perth Airport is located in the City of Belmont in the east of the city of Perth. The airport has flights to Singapore and Bangkok, two of the nine airports with direct flights to Bhutan. Flights to Bangkok take around 7 hours for the 5,341km flight, which costs around US$296 per person. Flights to Singapore, a distance of 3,913km, cost from around US$106 per person and take around five hours. 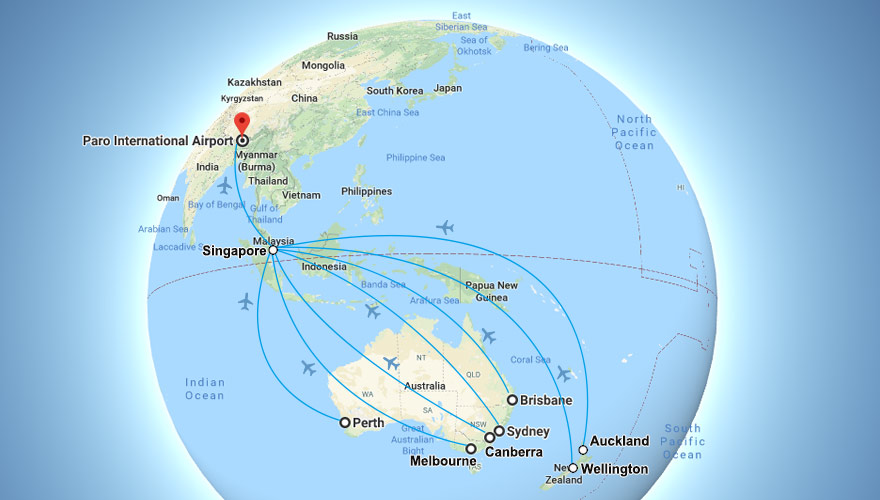 Connecting flights to Bhutan from Australia and New Zealand on Map

Flights from New Zealand only run from two major international airports, in Auckland and Wellington. There are no direct flights to Bhutan from New Zealand, which means passengers traveling to Paro International Airport have to connect at one of the nine airports in five Asian countries in order to get to Bhutan.

Auckland to Bhutan Flights: how to fly from Auckland (AKL) to Paro (PBH)

Auckland International Airport, on the northern of the two main islands of New Zealand, is the country’s largest and busiest airport, and lies just 21 kilometers to the south of the city center. The airport offers flights to Bangkok and Singapore, two of the nine airports with direct flights to Bhutan.

Wellington to Bhutan Flights: how to fly from Wellington (WLG) to Paro (PBH)

Wellington International Airport, on the southern tip of the north island of New Zealand, is a major air hub that lies around 5.5 kilometers to the south of the city center of Wellington. The airport offers flights only to Singapore of the nine airports with direct flights to Bhutan, though it is possible to get connecting flights to other gateway airports.

For budget travelers, the best option is to fly to Bagdogra in India, as this airport has the lowest cost of direct flights to Bhutan. Flights to Bagdogra from Wellington can take from 26-37 hours, but can cost from as little as US$550 per person, reducing the total flight cost by several hundred dollars.

Travel Documents for Flying from Oceania to Paro Bhutan

Australians and New Zealanders traveling to Bhutan will need to be on a pre-arranged tour, as per the requirements of the Tourism Council of Bhutan. Travelers will require their valid passport, the visa approval letter, and their proof of a pre-booked tour, which are all required to be shown to immigration once you reach Paro International Airport.

While most of the flights to the gateway cities for direct flights to Bhutan can be relatively expensive, there are cheaper options for those that are traveling on a budget. While the flights can be long and have several connections, the reduction in cost is well worth the extra time. Travel to Bhutan is a great opportunity for anyone, and while there are strict requirements for entering the country and touring the kingdom, they are no different from all other countries except India, and arranging a Bhutan tour with us is easy and simple.

0 Comment ON "Oceania to Bhutan Flights: how to get to Bhutan from Australia and New Zealand by Air?"