Everest Base Camp Trek is one of the most popular mountain destinations in the world. The Khumbu region, in Nepal, plays host to thousands of trekkers every year, and visitors come from all over the world to enjoy magnificent views of the highest mountain on Earth, Mt Everest (8848m) and its neighboring peaks. The natural beauty of the region inspires some beautiful photography, and the views along the route, as well as ate EBC itself, are spectacular. There are beautiful, century-old monasteries to visit and the trek provides the opportunity to experience the unique culture of the Sherpa people. 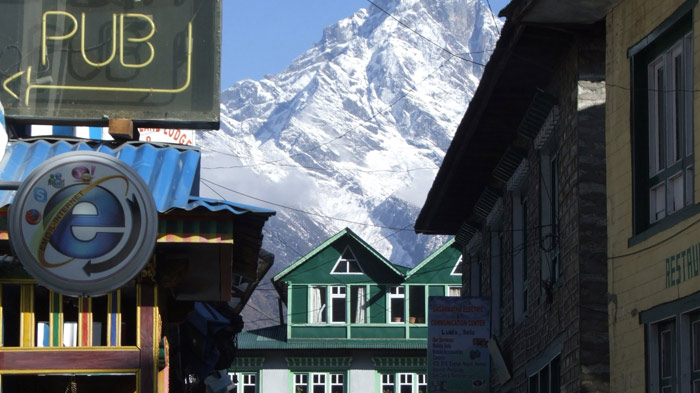 Trekking from Lukla to Everest Base Camp

A trek to Everest Base Camp is the adventure of a lifetime, and an incredible journey for those whose dreams soar as high as the clouds around the majestic peak. Set miles away from cars, home comforts, and the usual daily luxuries, you can saturate your spirit with the natural beauty of the region, and stretch your endurance beyond what you thought was possible.

The traditional trekking route from Lukla to EBC is travelled by around 95 percent of all trekkers to EBC, and the round trip takes between 10 – 14 days. The trek to the base camp, which sits at an elevation of 5,364 meters, crosses suspension bridges that span huge chasms, past hidden Buddhist monasteries, and into the heart of the rugged Sherpa country.

While the trek from Lukla to EBC can be done in as little as 10 days, it is better to spend a few extra days on the trek, to make sure that you get the most out of the experience, and do not end up rushing past many of the spectacular sights in your eagerness to get to the mountain. Fourteen days is the best and most optimum trekking time for the journey, and allows you to experience the stunning landscape of the mighty Himalayas and the unique Sherpa culture. 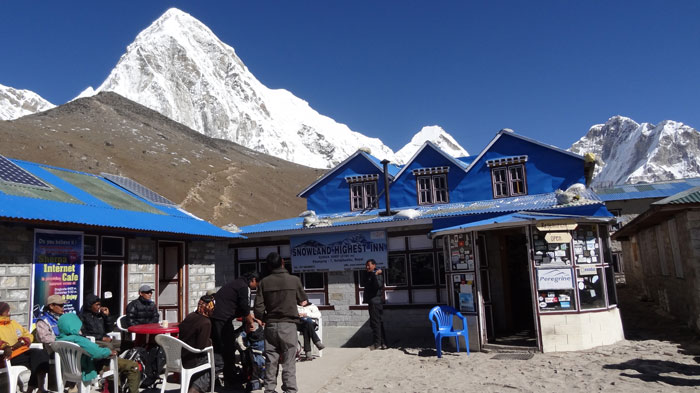 Trek from Lukla to EBC via Gorak Shep

The first day of actual trekking is a gentle start to your journey, with just three hours to the village of Phakding. The trek is mainly downhill through Rhododendrons, Magnolia trees, and pine forests, as well as several small settlements festooned with prayer flags, mani stones, and prayer wheels, and with the occasional tea room and shop. The trek down through the Dudh Kosi Valley is overwhelming in its beauty, crossing the river several times on the new suspension bridges that sit above the original bridges used by Hillary on his journey to conquer Everest.

The second day of the trek takes you from Phakding to Namche Bazaar, and continues the journey along the Dudh Kosi Valley. There are a total of three, prayer flag-festooned suspension bridges on this section of the trek, the last one after climbing up from the valley floor being around 109 meters long as it spans the enormous gorge. Day 2 is also when you will get your first view of Everest in the distance, at the farthest end of the valley, as you cross the last bridge of the day. The walk is around six hours in total, and ends with a grueling five hundred-meter climb to the village of Namche Bazaar, the capital of the Sherpa people.

Namche Bazaar is situated 3,440 meters above sea level, and is an ideal place to take a day to acclimatize more fully to the higher altitudes on the way to Everest. When trekking in high altitudes, and continuously ascending, it is important to ascend in stages, with days set aside to acclimatize yourself to the increased altitude each time. Altitude sickness is extremely risky at these elevations, and not only will it spoil your entire trip, if not treated properly can be seriously debilitating, and even fatal.

However, the day does not need to be wasted, since there are several things to do in Namche Bazaar. Although it is really no more than a village, this capital of the Sherpas has two museums, pizza houses, cafes, bakeries, internet cafes, and other shops for you to browse in. There are also a few other small villages in the area around Namche that are at similar altitudes, which you can take a short walk to, to explore the Sherpa culture more.

After your day of acclimatization and rest, the trek continues with a short but steep climb up out of Namche, and then onto a fairly level trail through the villages of Kyangjuma and Sanasa. After Sanasa, the trail descends to the valley floor of the Dudh Kosi River, and follows the river past hamlets and small settlement until you reach the small hamlet of Phunki Thanga. Here the trail climbs steeply up the side of the valley for the one and a half hour climb to Tengboche.

The next stage of the trail takes you to the village of Pheriche, and passes through several villages on the way. At the first of these, Deboche, there is a small nunnery that is worth a short visit, before continuing on through Pangboche and Dingboche to the day’s destination. All of the villages have food and teahouses for refreshments, and there is an interesting monastery at Upper Pangboche. The area towards Pheriche is one of pine forests, and is a pleasant walk along a mildly inclining trail.

As Pheriche is at an elevation of 4,240 meters, it is a great place to take your second acclimatization day. Take short, slow walks around the village, marvel at the peaks, and dig out a good book to read, but whatever you do, don't push it at this point. If you begin to feel unwell, inform your guide and return as quickly as possible to a lower altitude. The experts say hike high sleep low. Some trekking experts recommend that if you are feeling well, to hike each day to a higher elevation than the elevation at which you will sleep.

The trek to Duglha is an easy one, despite the four hundred meter ascent up to the village, and only takes around three hours, giving you chance to rest in this quiet little village.

Today your ascent is a little less, but is rugged and strenuous from Duglha to Lobuche. This small village has very little to do except explore the unique Sherpa culture, but it is peaceful and restful.

The trek from Lobuche to Gorak Shep, at 5,160 meters above sea level, is a fairly easy hike and should take around three hours, but is all uphill. There is a side trip you can take on the way to see the Everest Pyramid, an Italian-built weather station to monitor the climactic conditions of the mountain, to give mountaineers a better idea of when to go. In the village of Gorak Shep there is a small lake that is usually frozen most of the year round, and from here you will base your final leg of the journey to EBC. Behind the village is the hill known as Kala Patthar, from which you can get some of the most amazing views of Mount Everest.

Day 10 Gorak Shep to Everest Base Camp to Lobuche

From the village, it is a grueling trek up to the heady heights of the base camp, across the lateral moraine of the Khumbu Glacier. The trail then ascends the side of the glacier, before dropping down onto the glacier itself and finally reaching EBC. There is time to spend at EBC, to take in the amazing vista, and get those all-important photographs to prove to everyone that you made it to the world’s highest mountain, and then it is back down the mountainside to the village of Lobuche for the night.

The route back down the mountain is easier than the one going up, and a single day of trekking brings you down to the village of Dingboche, which you passed on the way up.

After a stay in Dingboche for the night, it is on down the mountain, and the easier trekking makes it faster getting back down to the valley floor of the Dudh Kosi River. You will stay in Namche again for the last night of the trek, before the last short climb back up to the gates of Lukla, and the end of the adventure.

There are several other routes that you can take as side trips from the main trekking route used by tourists, and some are even harder than the heavy climb up to EBC.

The trek from Namche Bazaar to Gokyo Valley and back is an easy six-day hike that increases in elevation by around 700 meters over the three days getting there. The Gokyo Valley is one of the most spectacular places in Nepal, and the sparkling lower Gokyo Lakes are a huge attraction to trekkers in the area. Few people take an extra day to make the full day hike up to the fifth and sixth lakes in the silent valley above Gokyo. These upper lakes sit in a high alpine bowl at the foot of Cho Oyu, the world's sixth highest mountain. 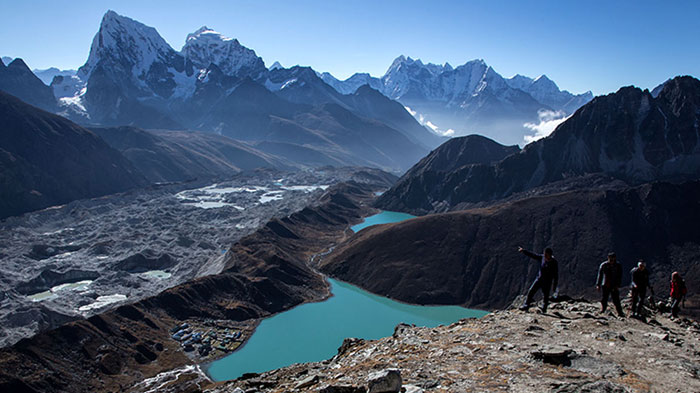 Instead of the normal route to EBC, you can take the detour from Namche and take a route through Gokyo Valley and over Cho La Pass to get to EBC. The trekking route is a scenic adventure around the high Khumbu region around Everest, where you can immerse yourself in the fabulous views of the world’s highest mountains. The route takes you around the best parts of the area around Everest, with serene alpine forests of Rhododendrons, pines, and oaks, across remorseless ice fields, and the moraines of the Khumbu glaciers. 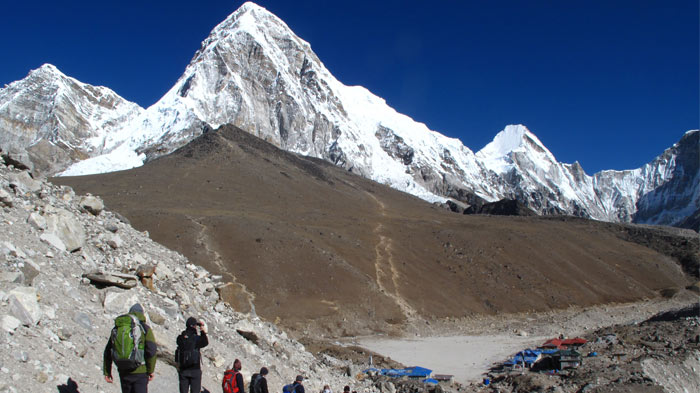 Trek from Gokyo Valley to Everest Base Camp

Short side trip from Namche Bazaar to Thame

The short trek from Namche Bazaar to Thame is a nice trek to take on an acclimatization day, and is a pleasant walk filled with spectacular views and picturesque villages. It is also mostly devoid of other tourists, so the walk is one that is not overcrowded, even in the peak season. The route goes up past the rocky promontory above the valley of Bhote Khosi to the village of Phurte. The valley here is filled with chortens and mani walls with a village made up of a few farm buildings surrounded by fields. After passing the side valley of Thesebu Kholi you will ascend towards Thamo, with its famous monastery, and then on to the village of Samde, before climbing again to the outlook point, from which you can see the valley of Thame Khosi. Once across the bridge over the Bothe Khosi valley, there is a steep hike up an ancient glacial moraine to Thame. 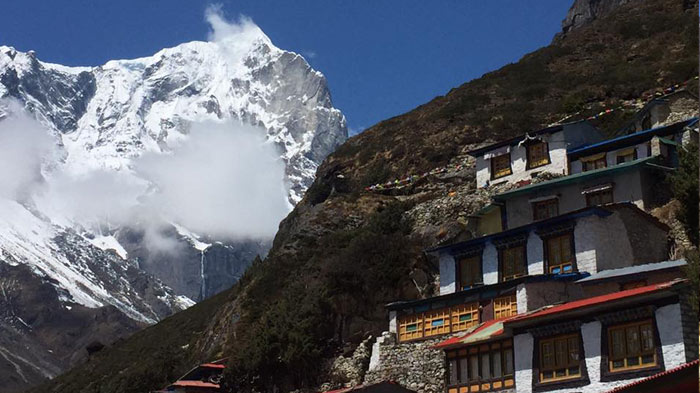 The Imja Khola River is a tributary of the Dudh Kosi, which drains from the slopes of Everest. The valley trek to Chukhung starts at between the villages of Thyangboche and Dingboche, and follows the valley southwest to a fork in the valleys, where the Chukhung Valley joins the Inja Khola Valley. A short walk along the Chukhung Valley brings you to Chukhung Village, a small lodge village that mainly serves trekkers and climbers in the Khumbu region of Nepal. The Chukhung Valley lies on the southern slopes of the Lhotse and Nuptse mountains, and is often the base for those trekking or climbing around Imja Tse Mountain. 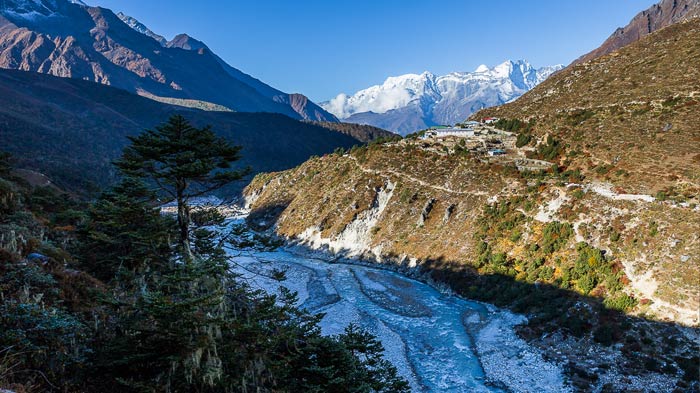 0 Comment ON "Different Trekking Routes to EBC from Lukla"