The Airport (Lukla) You Must Use for EBC Trek in Nepal

Probably the most remote tourist destination in the world, the small town of Lukla, in the Khumbu region of Nepal, is a place that can only be reached by flights from Kathmandu, and other local airports. There is no road going into the town, and travelers to Lukla have to either fly in, or trek in from the nearest town with a road. Flights to Lukla land at the aptly-named Tenzing-Hillary Airport, which sits on the side of a mountain at an elevation of 2,860 meters. 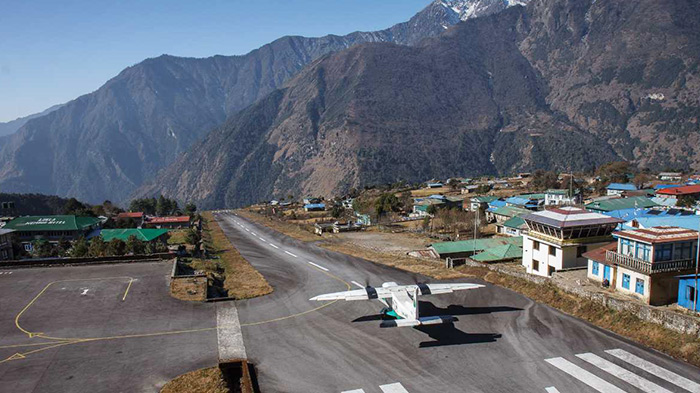 Carved out of the side of a mountain, the airport was built by Sir Edmund Hillary in 1965 - 12 years after he became the first man to conquer the world's highest peak - to help the local Sherpas spur development in the impoverished area. Now what once was a dirt strip is one of Nepal's busiest airports, named as well for Hillary's climbing partner Tenzing Norgay. The thousands of mountaineers and trekkers who visit the Everest region have to fly to the airport if they want to avoid a daylong bus trip from Katmandu and five days of trekking to reach here.

Location, altitude and scenery of Lukla airport in Nepal

Lukla is the starting point of all treks and climbing expeditions to Mount Everest from the Nepal side, and is situated at an elevation of 2,860 meters, making it an ideal staging point for acclimatizing to the higher elevations around Khumbu. Although Lukla means place with many goats and sheep, few are found in the area these days. Lukla contains a small airport servicing the region, and a variety of shops and lodges catering to tourists and trekkers, providing western-style meals and trail supplies. 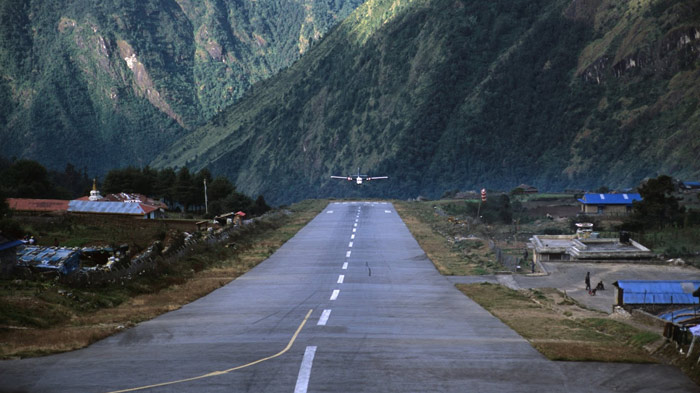 Lukla, the starting point of EBC trek in Nepal

The beautiful, high mountain peaks of the Himalaya Range surround the airport, and the views from the small terminal when you arrive or leave are spectacular. The town and airport are the only way to get into the area around Mount Everest from the Nepal side, and Lukla is the starting point of all Everest treks and climbs. The town was used by Sir Edmund Hillary as a base camp on his summit-reaching expedition, and the airport was renamed after him and his Sherpa guide, Tenzing Norgay in 2008.

Flight schedule and ticket price of flights between Kathmandu and Lukla

The airport has daily flights between Lukla and Kathmandu during daylight hours in good weather. Although the flying distance is short, rain commonly occurs in Lukla while the sun is shining brightly in Kathmandu. High winds, cloud cover, and changing visibility often mean flights can be delayed or the airport closed. Currently, only five local airlines operate flights out of Lukla, and only one of those operates to destinations other than Kathmandu, which are Phaplu Airport and Rumjatar Airport. The airlines all use the small, twin-engined Dornier Do 228s and de Havilland Canada Twin Otters, for their maneuverability and shorter landing and takeoff distances.

Flights from Kathmandu run every day, in the mornings, with scheduled flights leaving between 9:00am and 11:00 am. The flight takes around 30-40 minutes, and the cost of the flight is around US$ 177. This price does not change between high and low seasons, which means there is really no saving by flying there off-peak. There is also no first, business, and economy class on the flights, as all seats are the same class, and there is a 10kg baggage limit per person, which is not able to be increased due to the limited size of the aircraft. Lukla is Nepal's busiest domestic airport, and in the peak season, the airlines operate over 50 flights a day through the airport.

The airport is contained within a chain link fence and patrolled by the Nepali armed police or civil police around the clock, as it is located in such a remote part of Nepal. The apron has four stands and there is one heli-pad located 150m below the new air traffic control tower. No landing aids are available and Air Traffic Service is limited to Aerodrome Flight Information Service (AFIS) only. 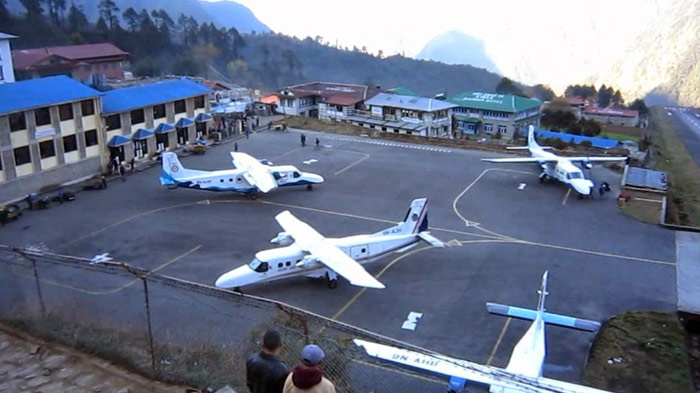 There are two control towers at the site, although only the newer one is used. The other now houses the various ground crews that work through the peak season at the airport, and accommodates their sleeping and living quarters. The new tower is manned by either two or three controllers, who are in constant radio communications with Kathmandu and the incoming aircraft.

There is just a single terminal for arrivals and departures, and the same is also used for cargo coming into Lukla. However, other facilities at the airport are very limited. There is no arrivals and departures announcement system at the airport, and the local guides are left to run around between the planes that are boarding to find out which flights their tourists are meant to get on, and the cabin staff are often found in the terminal shouting their flight details and looking for their passengers.

There are also no hotels or guest houses at the airport site, for those who have either missed their flights or have been delayed due to bad weather. However, the town of Lukla is only a ten-minute walk away from the terminal, and several guesthouses there are able to accommodate stranded tourists.

Only a forty minute flight from Kathmandu, it seems like a simple trip, until you realize that it is a white-knuckle ride of mountain dodging in a small plane to arrive at what has been consistently named as the world’s most dangerous airport. The airport at Lukla is often referred to as the most dangerous airport in the world, and if you have ever landed there, you will know why. The runway is a very short 1,500 feet long, and ends with an abrupt drop into the river valley below. Situated at an elevation of 2,860 meters (9,000 feet), it is flanked on all sides by the high mountains of the Himalayas, and this geographic location means there can be no missteps in take-off and landing. 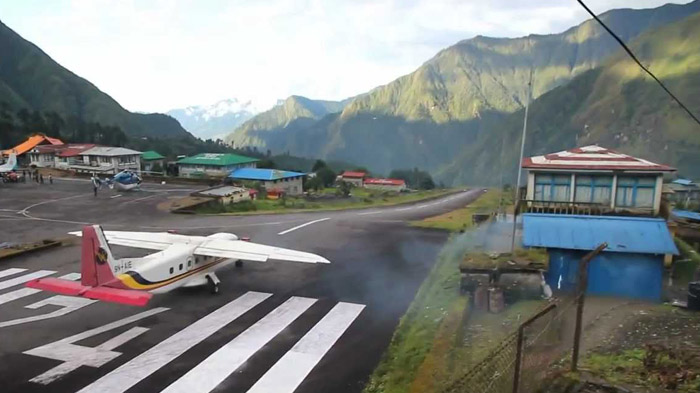 The runway itself is set at a 12 percent incline.

There is a big hill right behind the landing strip. The pilot also needs to clear a high ridge, bank left, descend steeply, and straighten the airplane for landing. Navigation is by sight only and he needs to negotiate several layers of clouds which can hang on the high hill or rise from the deep valley. This is why flights will often be cancelled and you could be stuck in Lukla waiting for a plane for days on end.

The runway itself is set at a 12 percent incline, which means the pilots have to be more skilled than any others in the world. Landing is done on the uphill incline, to aid slowing down, while take-offs are done going downhill, to aid in the increase in speed needed to take off. And with clouds often obscuring the view and the runway, it is only fitting that this airport is used for those thrill seekers who are set on trekking or climbing Mount Everest.

Lukla airport has a bad reputation and is always present in lists of the most dangerous airports in the world. Certainly the first time you land in Lukla you will feel a little nervous but after a while you will get used to it, if you care to repeat the experience. Accidents have happened, but on the whole, considering the amount of traffic, it is probably not much more dangerous than driving your car on a busy road.

Alternative to get back to Kathmandu

The alternative to waiting for a flight out of the extremely busy Lukla Airport, is to trek from Lukla to Tumlingtar, and then get a flight or bus from there to Kathmandu. However, this is a long trek, normally 8-10 days, and if you have already finished the Everest trek, it may be a little too long. 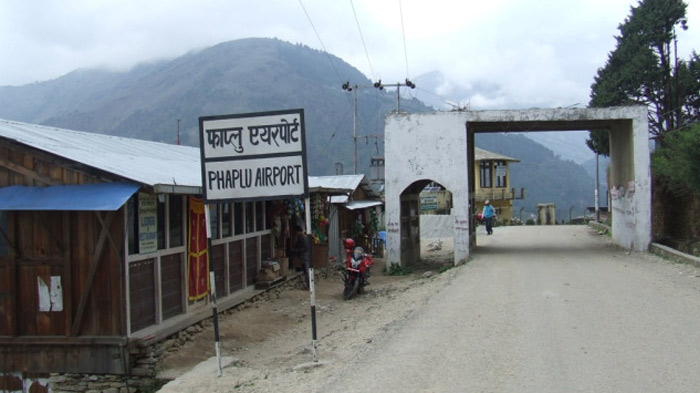 Tourists can also trek from Lukla to Phaplu and then go back to Kathmandu.

From Lukla, the nearest bus stations are at Phaplu and Salleri, both of which are a couple of days trek from the town of Lukla. Buses and jeeps run several times a day from the small towns back to Kathmandu. The other route is to take the seven day-long trek to Shivalaya – or add an extra half day and continue on to Jiri, although there is little point since the bus from Shivalaya goes through Jiri and the road follows the old trekking route – and then get the express bus back to Kathmandu.

More and more tourists are now taking this option of flying in and trekking out, especially in the peak season, as flights out of Lukla can be extremely full, and weather is often a problem, even though the rest of the country is sunny. Waits in Lukla for a flight out in the high season can take up to 3-4 days, which makes the trek out to the outlying towns of Salleri and Phaplu one of the best options. 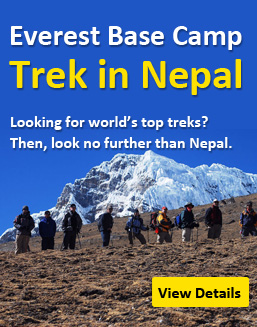