The 13-day Beijing Tibet Kathmandu tour starts from exploring Mutianyu Great Wall, Forbidden City in Beijing. Then, you will fly to Lhasa to enjoy the stunning lakes and holy monasteries. After fully exploring Lhasa, you will have a chance to visit the famous Durbar Square, Swayambhunath, Patan City, and other attractions in Kathmandu of Nepal.

Free Time to Tour Hutong - Nanluoguxiang and do Shopping

Lhasa to Namtso Lake and drive back to Damxung

Fly from Lhasa to Kathmandu 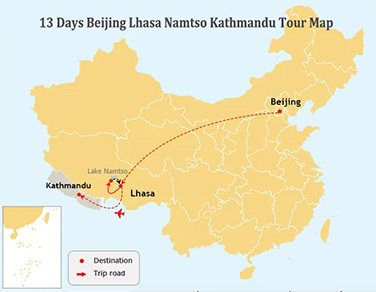 Upon arrival in Beijing airport, our guide will be meeting you and get you transferred to your hotel in Beijing. The rest of the day is at leisure.

After breakfast, your guide will lead you to visit the majestic Mutianyu Great Wall. You will be taken on a group tour to the Great Wall, the most famous symbol of China and one of the world’s most remarkable architectural wonders. This section was first built during the Ming Dynasty (1368-1644 AD).

Today, you will head to visit the magnificent Forbidden City which used to be the imperial palace of the Ming and Qing dynasties with a history of around 600 years. Then, you will move to the Imperial Ancestral Temple (also Taimiao of Beijing). Lying to the east of the imperial palace, the Forbidden City, the Imperial Ancestral Temple was a place where Chinese emperors stored their ancestors' tablets and worshipped them during festivals and ceremonies.

After that, you will visit Beihai Park. It is one of the oldest, largest and best-preserved ancient imperial gardens in China. With over 1,000 years' history, the park is not only a classic combination of the grandiosity of the northern gardens and the refinement of the southern gardens in China, but also a perfect integration of magnificent imperial palaces and solemn religious constructions.

Day 4: Free Time to Tour Hutong - Nanluoguxiang and do Shopping

Hutong, which refers to traditional courtyard residence in narrow alleys in Beijing, is a great place where international tourists can learn the folk culture and old quarters of Beijing city.In the morning, tourists can are recommended to explore Nanluoguxiang yourself, one of the most famous Hutongs in Beijing.

With bustling main street, you will find a variety of cafes, kiosks selling different kinds of food and beverages and souvenir shops. A great way to tour Hutong is to enjoy the ride on a traditional rickshaw and rickshaw riders, most of whom can speak basic English, will take you to cover all the historical significance.

In the afternoon, tourists are free to do some shopping in Beijing and get prepared for the flight to Lhasa in the tomorrow morning.

When you arrive in Lhasa by flight, your guide will greet you and take you to your hotel. Tourists may view the Yarlung Tsangpo River / Bhamaputra River (the Longest and largest river in Tibet) and Lhasa river on their way to Lhasa.

After arriving in Lhasa, you can take a rest and get acclimatized to high altitude. If you feel to go out, then you can go to the Potala Square, where you will enjoy the fountain with different colors and get amazing photos of the Potala and around.

Then after lunch, tourists head to Jokhang Temple which was founded by the 33rd great king of Tibet in the 7th century, in order to promote the Buddhist religion. Inside you can see the statue of Buddha Sakyamuni at the age of twelve, perhaps the only most venerated object in Tibetan Buddhism. Around the temple is Barkhor Street where you can do kora (a religious circle of a building or mountain) with pilgrims and locals, in the meantime, you can buy souvenirs.

In the morning, you are going to visit Drepung Monastery which is one of the “great three” Gelug monasteries of Tibet, founded in 1416 by Jamyang choge, one of the Tsongkhapa’s main disciples. Ganden palace used to be Dalai lama’s palace in the Drepung before he moved to the Potala palace.

Day 8: Lhasa to Namtso Lake and drive back to Damxung

In the morning, drive from Lhasa to Lake Namtso, one of the four holy lakes of Tibet and also the highest saline lake in the world. On the way, you can see snow-capped Nyenchen Thanglha Mountain Ranges and lots of nomads and their tent with grazing yak and sheep densely-populated on the flourishing grassland (in summer). Besides, you can enjoy the view of the Sky-Road Railway with snow mountain background; while standing at the famous Lagenla Pass(5190m), you can view the stunning vista of holy Namtso Lake.

Then we can enjoy our time doing a leisurely trek around Tashi Dor Island and along the lakeshore. Drive back to Damxung. (For environment protection, the Lakeshore guesthouses were close by the government.)

Day 9: Damxung to Lhasa via Chimelong Nunnery and Tsurphu Monastery

After breakfast, we will first visit Chimelong Nunnery (Phyirmil Lung Nunnery). Roam over the peaceful small nunnery and get an idea of different Buddhist studies in Tibet, you may also spot a sky burial site (Tibet funeral site) in the distance.

Then, we can go to Tsurphu Monastery, the seat of the Karmapa branch of the Kagyupa order of Tibetan Buddhism. Here, you can learn more about the ‘Black Hats’, the Karma Kagyupa school of Tibetan Buddhism. In the summertime (June to September), we can also go for a ‘Linka outing’ (Tibetan-style picnic) in the small village at the foot of the hill of Tsurphu Monastery.

Finally, we will drive back to Lhasa.

Today’s Cultural Tips: Sky burial is a funeral practice commonly seen in Tibet. The corpse will be disposed of and later devoured by vultures. In Tibetan Buddhism, sky burial is believed to represent their wishes to go to heaven. Only family members of the dead can attend the funeral.

Day 10: Fly from Lhasa to Kathmandu

Today, you will take the flight from Lhasa to Nepal. When you arrive at Kathmandu, your guide will greet you and take you to your hotel.

In the morning, we will the Kathmandu’s Durbar Square, which is one of three durbar (royal palace) squares in the Kathmandu Valley. It is the site of the Hanuman Dhoka Palace Complex, which was the royal Nepalese residence until the 19th century and when important ceremonies, such as the coronation of the Nepalese monarch, still take place today.

Then, we will tour Swayambhunath. It is one of the most recognizable symbols in Nepal and the painted eyes of Buddha watch all who ascend the worn stone steps. It is a World Heritage Site and one of the holiest Buddhist sites in Nepal, and is at the source of the Valley’s mythical beginning.

In the afternoon, the tour group will head to Patan City, which is 15 minutes driving from Kathmandu. Patan's central - Durbar Square, is absolutely packed with temples: It’s an architectural center point with a far greater concentration of temples per sq. meter than in Kathamandu or Bhaktapur. You may shop around and finally we will head back to Kathmandu.

In the morning, we are about to tour Pashupatinath, the most important Hindu temple in Nepal, the old buildings on the site were destroyed by Moslem invaders in the 14th century, its stone linga smashed to dust, but it rose again behind their retreating backs. Succeeding monarchs reinstated the temple and the images.

Then you will explore the Bouddhanath, which is one of the largest stupas in South Asia, the focal point of Tibetan Buddhism in Nepal. The white mound looms thirty-six meters overhead. The stupa is located on the ancient trade route to Tibet, and Tibetan merchants rested and offered prayers here for many centuries.

The third attraction we will cover is Bhaktapur Durbar Square. It is a conglomeration of pagoda and shikhara style temples grouped around a fifty-five window palace of brick and wood. The square is one of the most charming architectural showpieces of the Valley as it highlights the ancient arts of Nepal.

You will be transferred to the International airport to connect onward flight.

The tour allows you to explore Beijing, the capital city of China. Then, you will move to visit the “Sunshine City” - Lhasa. Finally, flying to Kathmandu with across the Himalayans.