How to Take the Jomolhari Loop Trek like an Expert

Bhutan Jomolhari Loop Trek is one of the most popular places for tourism in Bhutan. The Paro Valley extends from the confluence of the Wang and Paro Rivers at Chuzom Town all the way up to Mount Jomolhari, on the border with Tibet in northern Bhutan. One of the most beautiful regions of Bhutan, this picturesque landscape is a popular destination for trekkers, and the route from through the valley to the foot of Mount Jomolhari, the “bride of Kanchenjunga” and the third highest mountain in the kingdom, is an excellent trekking area of anyone with a love of stunning mountain landscapes and beautiful vistas.

What is the Jomolhari Loop trek in Bhutan?

Among the number of stunning treks in Bhutan, the Jomolhari Loop Trek is undoubtedly one of the most popular treks in the kingdom, and sees hikers from all over the world descending to tackle its slopes and valleys. Starting from the small village of Gunitsawa, in the northwest of Bhutan in the Paro District, the route of the trek heads roughly northwest, towards the famed Jangothang, the best campsite in the Bhutanese Himalayas and the base camp for climbing Mount Jomolhari. It is called a “loop” trek, because the trek heads out to Jangothang and then comes back to Gunitsawa Village following a slightly different route that makes a roundabout loop to the beginning again. What is the Jomolhari Loop trek length or distance?

The trek from Gunitsawa Village to Jangothang and back takes around seven days, and covers a distance of around 82 kilometers, or around 50 miles. The daily distance ranges between 11 and 22 kilometers per day, depending on where you will be staying each night, and reaches trekking elevations of between 4,100 and 5,000 meters above sea level.

What is the Jomolhari Loop trek difficulty?

The trek is rated by the Tourism Council of Bhutan as being of “medium” difficulty, and is suitable for the expert to intermediate trekkers, preferably with some experience in high-altitude trekking. While the landscape is not too rough and rocky, there are plenty of steep climbs and narrow winding trails, which are a challenge even without the higher altitudes. On this trek, altitude is a major issue, and you should be prepared and acclimatized to higher altitudes before commencing the trek. Several of the campsites are above 3,000 meters, and the campsites at Jangothang and Thombu Shong are both above 4,000 meters. Trekkers should be aware of the effects and symptoms of altitude sickness, and what to do if it affects them or their other party members.

What are the differences among Jomolhari Loop trek, Jomolhari trek, and Jomolhari Base Camp trek?

There are three main treks around Mount Jomolhari, all of which take you to the base camp at Jangothang, and get there through slightly different routes.

What is the medium level Jomolhari Loop trek?

The medium level Jomolhari Loop Trek, which takes you direct to the campsite at Jangothang and then back along a slightly different route, is the neither the easiest of the three main treks, nor the shortest of the three, taking seven days along relatively easy, but high-altitude countryside, for this area.

What is the Jomolhari trek with medium to hard difficulty?

The longest and hardest of the three treks, this nine-day Jomolhari Trek is one that is not for the faint-hearted, and requires a good level of physical fitness to complete the trek. Taking you over two high-altitude passes that are above 5,000 meters and through some of the kingdom’s most remote terrain, this trek is the ultimate in high-altitude trekking in the Jomolhari region.

What is the Jomolhari Base Camp trek?

The base camp trek is shorter than the main Jomolhari Trek, taking just six days, to trek to the base camp from the Drukgyel Dzong, along a different route from the loop trek, and back again along the same route as the outbound trek. While it is still rated as an “easy” trek, it is not as hard as the loop trek as it only reaches altitudes of around 4,000 meters at the highest point.

The third highest mountain in Bhutan, and the source of the Paro Chhu (river), Jomolhari, known locally as Chomolhari, lies on the border with Tibet, straddling the boundaries of these two Buddhist lands like a giant guardian. The first of two base camps that were set up to climb Jomolhari in 1937, Jangothang lies at an altitude of 4,100 meters above sea level, and lies in the heart of the Jigme Dorje National Park. The campsite, which is also used by trekkers, also contains the ruins of what is believed to have been a fort on one of the rocky outcrops that permeate the site.

Known as the Lakes of Tshophu, these high-altitude lakes are renowned for being permanently inhabited by the rare Ruddy Shelduck, a breed of wildfowl found only in the Himalayas, mostly around Bhutan and Tibet, as well as being a popular fishing spot for the deep-swimming brown lake trout.

The trek takes you over three separate passes, including the Bhonte La Pass, the highest point of the trek at 4,890 meters above sea level. The passes, which are all above 4,000 meters, are great places for viewing Mount Jomolhari and the surrounding Himalayas, and are all strung with the usual Buddhist prayer flags.

The trek is located in the foothills of the mighty Himalayas, close to the border with Tibet. Starting in the Paro Valley, to the north of the city of Paro itself, the trek heads northeast from the head of the valley and over the foothills from Paro District to Thimphu District. 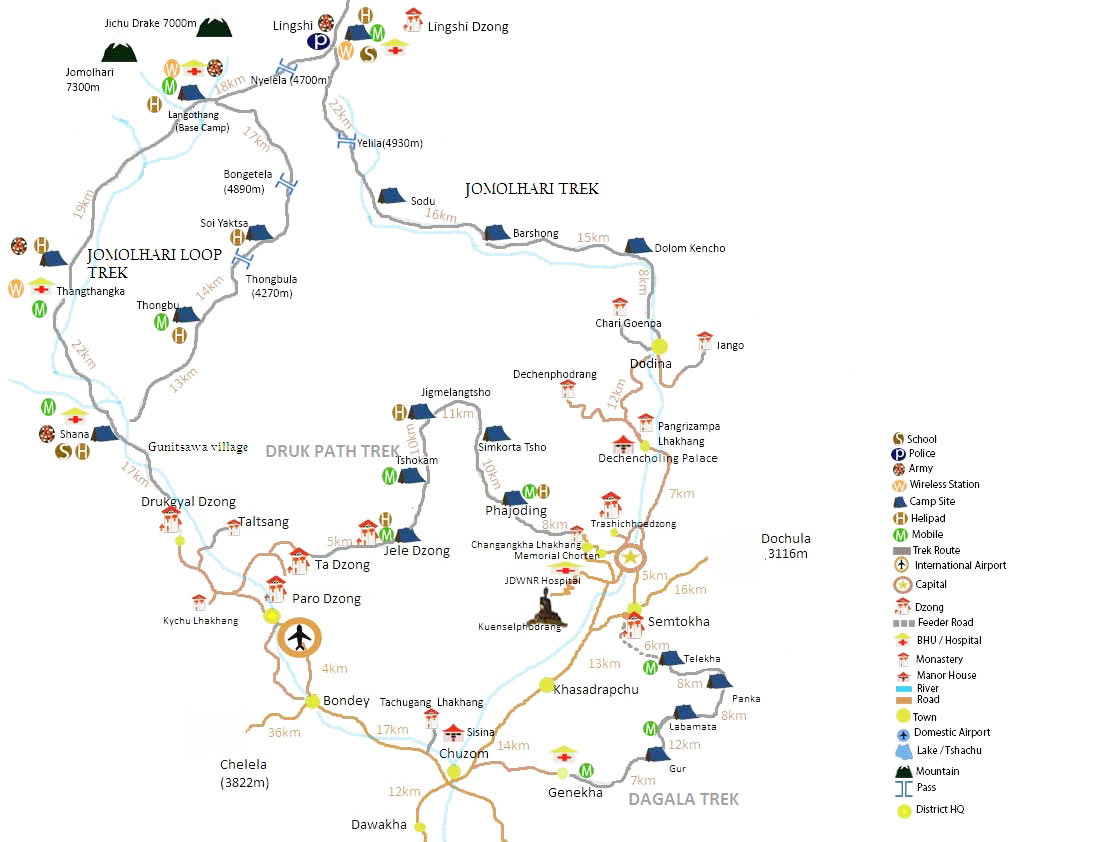 The trek starts at Gunitsawa Village, in Paro, and heads across the river to Sharna Zampa, and then on through Thangthangkha to the base camp at Jangothang, before turning around and heading back through Soi Yaktsa and Thombu Shong to return to Gunitsawa Village.

What can we explore from day by day Jomolhari Loop trek itinerary?

After traveling from Paro, the first part of the trek is the trip from Gunitsawa Village to Jangothang, heading first across the river to camp for the night before taking the winding up and down trail up the valley to Thangthangkha, where you will get some great views of Jomolhari. Then it continues to the base camp at Jangothang, through the winding valleys and ridges of the region, with its yak herder’s huts, through the ancient villages of Soe, Takethang, and Dangochang. 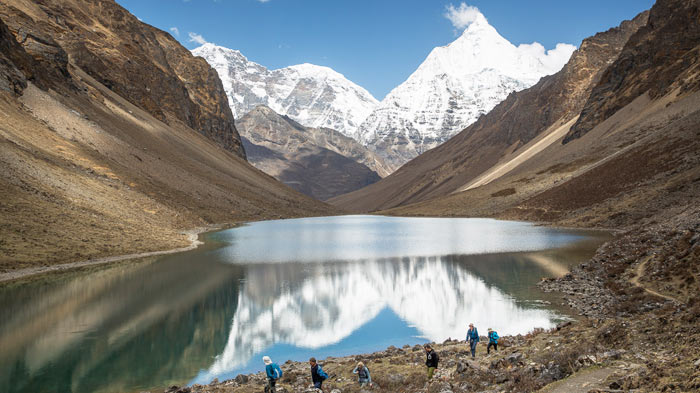 The return journey is equally as astounding, taking a slightly different route from Jangothang, across the Bhonte La Pass and along the Dhumzo Chhu to the small settlement of Soi Yaktsa. After the camping, you will head for the small village of Thombu Shong, which consists of just 3-4 houses, crossing the Takhung La Pass along the way. Day 3 takes you from Thombu Shong back to Gunitsawa Village, crossing the Thombu La Pass to the village and the end of the trek. You can then stay overnight in Sharna Zampa or take the car back to Paro.

How much money does the Jomolhari Loop trek cost?

Trekking in Bhutan is an all-inclusive affair, which is completely covered by your Minimum Daily Package cost, which starts at US$ 250 per day in the peak months to US$ 200 per day in the low seasons. The MDP covers all of the trekking costs as well as your accommodation and food, guide, cook, and porters, and all support and transport vehicles. The only additional costs for a trek in Bhutan are the cost of souvenirs, gifts, and personal items, such as toothpaste, shampoo, alcohol, etc. Even the drinking water for the tour and trek is included. Know more about Ultimate Guide on Bhutan Trekking Routes Prices and All

When is the best time to take the Jomolhari Loop trek?

The Jomolhari Loop Trek is a trek in the mountains that can, theoretically, be done at any time of the year. However, that said, it is best to come in the spring, from March to May, or the autumn, from September to November, as these are the times when the weather is at its best for trekking in Bhutan. Skies are clear and bright, the sun is usually shining, and the temperature is warm, though sometimes a little chilly in the evenings.

The trek can be done in summer and winter, though it is not always advisable unless this is the only time you can come to Bhutan.

Summer, from June to August, is the monsoon season in Bhutan, and while the rain mostly falls at night or in the evenings, there are times when it can rain all day long. Since the monsoon rain is not good for trekking, there is no guarantee that your day of trekking can be completed if it is raining heavily.

It is similar in winter, from December to February, when there is more chance of snow in the foothills of the Himalayas. While trekking in snow can be done, there are times when the heavy snow can block the passes and stop you from trekking.

What should we pack in advance before taking the Jomolhari Loop trek in Bhutan?

The Jomolhari Loop Trek may be an easy trek according to the ratings, but it is a trek at high altitudes, so you may want to bring some warmer clothing for the afternoons and evenings, when it can get a little chilly in the mountains. As the trek is along rough terrain for most of it, you will need a good sturdy pair of hiking boots, and it is a good idea to have some good woolen socks to keep your feet warm.

You will also need a day pack, as your main pack will be portered to the next campsite. The day pack is useful for carrying things like your camera, water, and other essential items with you. It is also a good idea to bring a good, wide-brimmed hat, sunglasses, and sun cream with you to protect you from the harsh sunlight at the higher altitudes. If you are trekking in the winter months, warm gloves, plenty of layers, and a thick fleece or hiking jacket is essential. For the summer months, make sure that you have waterproof clothing, as it can get a little wet.

Accommodations and Meals during this Trek

All of your accommodation and food on the tours in Bhutan are included in the price of the tour itself. When trekking, your food is also included, and will be cooked for you by a cook that will be in the support team at each campsite. Your camping equipment is also part of the inclusive items for the treks in Bhutan, and will be provided by your tour operator. 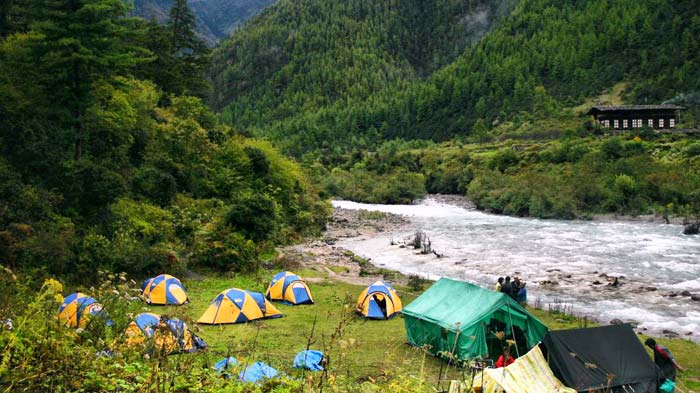 Campsite with lush plants surrounded, green grass underneath, and large tent pitched for cooking and meal-having by the riverside.

The Jomolhari Loop Trek is one of the most popular medium-range treks in Bhutan, and has excellent reviews by trekkers from all around the world. One of the most popular aspects of the trek, according to reviewers, is the stopover at Jangothang for a complete day, allowing you to spend the day exploring the area better, and getting some of the best shots of the mountain, especially at sunset and sunrise, which most “base camp” treks do not have.