The most popular trek in Bhutan, the Druk Path Trek is a six-day trek that takes you through the beautiful countryside, blue pine forests, high mountain ridges, and crystal-clear lakes of the Paro and Thimphu Districts of Bhutan. With stunning views of the kingdom’s highest peak, Mount Gangkhar Puensum, the trek starts from Paro and runs all the way to the capital of Thimphu.

What is the Druk Path Trek distance?

Covering a distance of around 54 kilometers, this short Druk Path trek takes six days, walking at a fairly leisurely pace each day. The daily distance covered ranges from 5 to 11 kilometers, and takes from between three hours and five hours each day, giving you ample time to enjoy the spectacular scenery of this beautiful area of Bhutan, the Land of the Thunder Dragon. 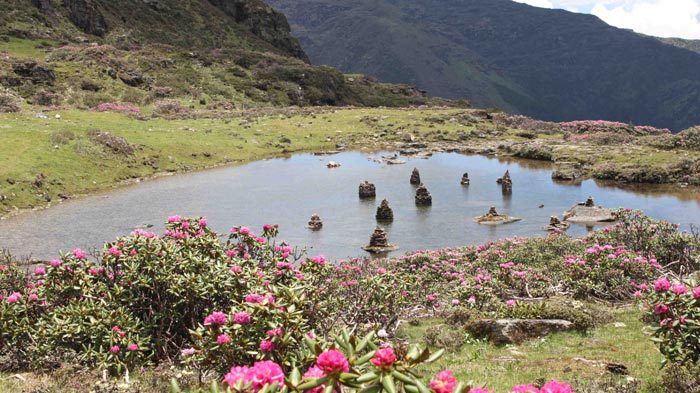 Sceneries along the route with clear silhouette of mountains behind and bright-colored flowers in full bloom.

What is the Druk Path Trek difficulty?

The trek is rated by the Tourism Council of Bhutan as “medium”, mainly because of the higher elevations that you will reach during the trek. With a maximum elevation of around 4,235 meters, which is at the top of Labana La Pass, which is a long and hard climb. Most of the days of trekking are relatively leisurely, with only 3-5 hours of trekking each day, and only covering shorter distances than most Bhutan treks on a daily basis.

The National Museum of Bhutan, Ta Dzong was once a watchtower of Paro Dzong, built to protect the Dzong in around 1649 from the invading Tibetan armies. Now the kingdom’s premier museum, this unique cylindrical building is one of a kind.

Known as the Ox Hump Pass, because of its unusual shape, Langye Ja La lies around 4,070 meters above sea level, and is above the famous “Sand Ox Lake” of Jimilang Tsho. The lake was named for the legend of the massive bull that emerged from the lake to help increase the herd of a nomad family that grazed their cows on the lake shore.

Janye Tsho is another lake that lies at the high altitudes along the trail, in the midst of a forest of dwarf rhododendron trees, while Simkotra Tsho, at 4,110 meters above sea level, lies close to a ruined Dzong that dates back almost 600 years.

The two monasteries of Thujidrak and Phajoding are major highlights of the trek. The Thujidrak Goemba lies at an altitude of 3,950 meters above sea level, perched on the side of a precipitous rock cliff, which was an ancient meditation place above Phajoding Village, while the lower Phajoding Goemba is a major meditation retreat, with dozens of small meditation caves dotted across the hillside.

The Druk Path Trek lies in both Paro and Thimphu Districts, between the two main cities of Bhutan, in the northwestern region of the kingdom. Lying close to the mighty Himalayas that run across the entire length of the Bhutanese border with Tibet, the trek has excellent vies of some of Bhutan’s highest mountains.

The trek starts in Paro, and begins with a tour of the famous Paro Dzong, and then the Ta Dzong watchtower, now the National Museum. This is where the trek starts properly, and heads out of the city to the Jili Dzong and Jangchulakha, Jimelang Tsho, Simkotra Tsho, and Phadojing, before finally ending in Thimphu, at Motithang. 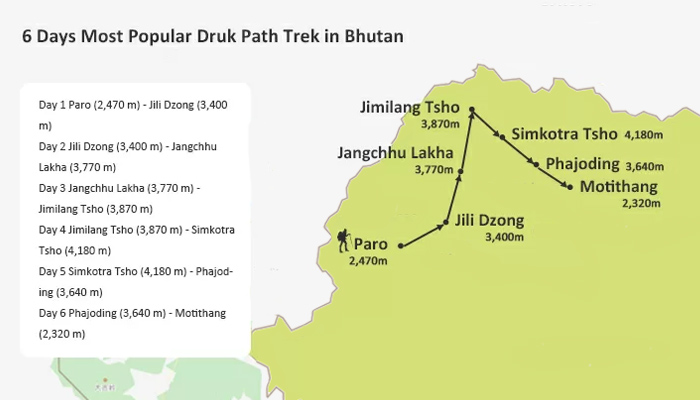 What can we explore according to day by day Druk Path Trek itinerary?

Day one of the treks is one of the most arduous days, with a climb that rises by more than 1,000 meters in altitude. The trek starts from Ta Dzong in Paro, and heads up out of the city through forests of fir and blue pine to Jili Dzong, from where you descend to the campsite below the Dzong.

Day two starts with a steep climb before leveling out through the thick forests of dwarf rhododendron trees towards the campsite at Jangchulakha. After staying the night, you will take the trail along the high ridge to the campsite for day three, which lies next to the stunning Jimilang Tsho, famous for its trout fishing.

The fourth day is a trek to Simkotra Tsho, through rhododendron forests and past the Janetso Lake. Crossing a vast meadow, you can see the herder camps in the grassland, as you neat Simkotra Tsho. 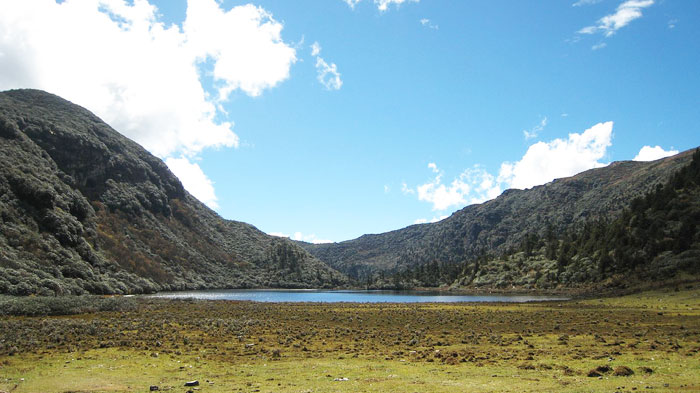 Day 5 begins with a gradual ascent to the pass, from where you get a great view of Mount Gangkhar Puensum, the kingdom’s highest mountain. On the other side, you will descend to the Phajoding Monastery, where you will camp for the night.

The last day of the trek takes you from the monastery to Motithang, in Thimphu, which is all downhill, making the trekking easier for the last few kilometers. Trekking through areas of blue pine forests, this leisurely pace takes around three hours to get to the Bhutanese capital.

How much money does the Druk Path Trek cost?

However, while this may seem expensive, it is the only thing you will have to pay for. The package actually includes your 3-star accommodation in hotels, all camping equipment, food for the entire trip, and transportation within Bhutan, as well as the guide, driver, and support team for the trek. Your only other costs are for additional personal items such as gifts and souvenirs. Know more about Ultimate Guide on Bhutan Trekking Routes Prices and All

What are the Druk Path Trek temperature and climate?

The spring months, from March to May, are some of the warmer months of the year, with temperatures ranging from around 12 degrees in March to as high as 17 degrees in May, and with nighttime temperatures never getting below freezing point.

Autumn is similar, with daytime highs ranging from 17 degrees in September to 12 degrees in November, and around the same range of nightly temperatures as the spring. The weather is clear and bright, making for excellent views of the mountains, and with almost no rain at all. 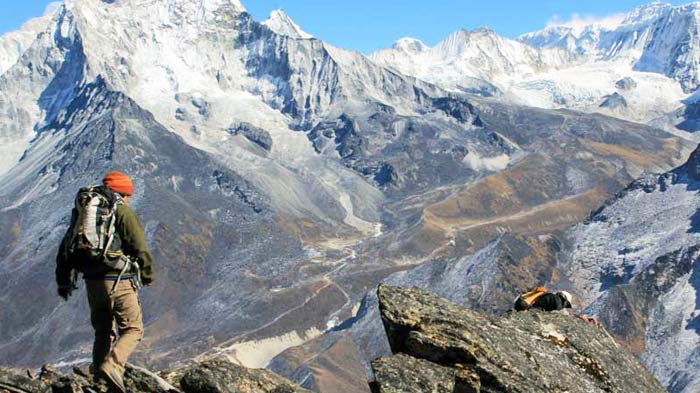 Walking on the ridges with snow-clad mountains in front and winding paths underneath in Autumn.

Summer is a little different, with some light clouds and temperatures ranging between 18-20 degrees during the day, and from 10 to 12 degrees at night. However, July and August can get a little wet, and while most rain falls in the evenings, some days can be completely waterlogged.

Winter is another matter, with high temperatures ranging from 7-10 degrees in the daytime to nightly lows of -4 to -6 degrees. While cold, it is still possible to trek, as there is little to no rain. However, there is a higher chance of snowfall blocking the pass, or causing snow storms which can put a stop to all trekking for several days.

When is the best time to take the Druk Path Trek?

For a short, moderate trek in Bhutan, this can actually be a relatively good trek where weather is concerned. While the traditional trekking seasons in Bhutan run from March to May and late September to November, the Druk Path Trek can actually be done at any time of the year, as there are relatively few bars, even in the depths of winter. However, summer and winter are debatable months for trekking as heavy rain or heavy snow can often stop a trek in its tracks, and there is no guarantee that the weather will be suitable at the time you arrive.

What should we pack in advance before taking the Druk Path Trek in Bhutan?

While the weather in the spring and fall is warm and sunny, there are lows in the temperatures, so you need to add at least a few warm sweaters and a good jacket, just in case it gets too cold in the evenings. A good sturdy pair of hiking boots is essential as well as warm socks, good hiking pants, preferably waterproof just in case, and a hat and gloves. It is advisable to bring sun cream and lip balm, as the sun is bright at these elevations, and the winds can be harsh over the mountains. Also bring sunglasses to protect your eyes.

All accommodation and meals on the trek are included in the package. For staying in hotels before and after the trek, your hotels will be chosen by the tour operator but will be at least a 3-star hotel, which you can upgrade if you wish for the additional cost. During the trek, your accommodation will be tents, which will be put up before you reach the campsites by the support team. 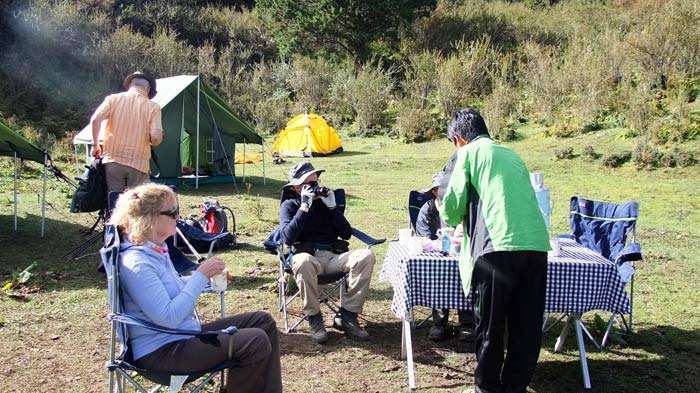 Local cook preparing meals with the Bhutan manner for tourists along the trek in a lovely day.

The Druk Path Trek is one of the most popular and exciting treks in Bhutan, and has a mid-range level of difficulty, which actually makes it suitable for an experienced trekker. However, as the trek is done at a relatively leisurely pace, a novice could also make the trek, as the days are not too long, at around 3-5 hours of trekking per day.

The trek has sometimes been suggested to be compressed into a four-day trek, as the number of hours in the day for trekking is relatively low. However, this would not be a suitable trek to compress like that, as there are factors to take into consideration. The trek, while short and relatively leisurely, does have several harder parts to it, that are extremely tiring, even for someone with a good level of fitness at this high altitude. The altitude is also a bar to compressing the trek, as you will need to acclimatize slowly as you climb to the higher altitudes, and the shorter days trekking allow for this, since you will acclimatize to the higher altitude of Paro before you start the trek.