The trekking route embarks on Toktu in the northwest of Ngang Lhakhang and follows the trout-filled river Chamkhar Chu to explore deeper. The trail goes southeastwards to end this short but amazing trek in Ogyen Chholing after you have successfully accomplished the only challenge of ascending by 500m to Pephe La pass.

Bumthang is widely regarded as the “Cultural Heartland” of Bhutan. You can get an in-depth understanding of the primitive civilization of this country by visiting a great number of ancient temples and Lhakhangs.

The culture of Bhutan is not only bred from the rivers or in the ancient temples, but it also derives from the primitive Bhutanese life-styles. Bumthang Culture Trek also brings you to a large number of small local villages to experience the life which the locals have lived for centuries.

The entire year can be the best time to take this trek except for the monsoon season in Jul. and Aug. 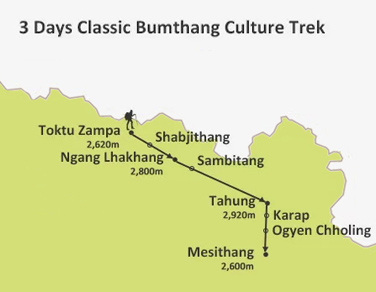 The route follows the Chhugor Chu, a river famous for trout and stops at Thangbi Lhakhang for lunch. Then the trail enters the Ngang Yul (Land of the Swan). According to one of Bhutan legends, the valley once had been occupied by flocks of swans, so the name of Ngang Yul is still in use today.

The campsite is just near the Ngang Lhakhang, the Swan Temple in the center of this area.

The trek formally embarks on at Draphe Dzong, the ruin of strategic fort in the past years. Cease your moving steps and take a worthy exploration. The trail begins to ascend to a dense birch, sycamore and tall bamboo covered forest after crossing the verdant meadows and dwarf bamboos.

The route continues to go uphill till reaches a rock cairn and a small stone shrine not far from the only challenging ascent to Phephe La (3,360 m). Prayer flags fly up in the air to the highest site, accompanied by lush birch and fir trees on the forested ridge.

The downhill trail guides you to pass through a ploughed field into a broad valley after you have arrived at broad yak pastures. Amongst several possible camping sites, the most popular one locates uphill behind the village of Tahung.

Camping behind the village of Tahung

During the trek of this day, the trail makes a south swerve and follows the Tang Chhu another Trout-filled river to reach Tang Rimochen Lhakhang. It will soon lead you to Tang Ogyencholing after you have passed the Mebar Tsho (The Burning Lake).

Ogyencholing is an eminent palace that only collects the privately owned museum in Bhutan. Pacing in the palace, you can find a great number of traditional artifacts on display.

It is possible to compress the multiday hike into a one-day arduous trek by starting from Ngang Lhakhang during off seasons. But we do not recommend you to do so in peak months since there are numerous splendid trails distributing among the Bumthang valley and a tight schedule do arise discomfort and inconvenience.