How to Explore the Bumthang Cultural Trek like Local Bhutanese

As one of the best short treks in Bhutan, the Bumthang cultural trek runs through what is known as the “cultural heartland” of Bhutan, and is one of the most popular short treks in the kingdom. Taking you through beautiful valleys and along the crystal clear waters of trout-filled rivers, this stunning trek is the ideal long weekend trek for those who want to experience the true culture of Bhutan. As well as plenty of ancient lhakhangs, you will also find a number of small villages, where the locals still live in the same way as their ancestors have for hundreds of years.

What is the Bumthang cultural trek length or distance?

A three-day trek, the Bumthang cultural trek covers a distance of around 44 kilometers over the three days of trekking, averages around 15 kilometers per day of easy trekking. While this is not a long trek for Bhutan, where many of the treks are 2-3 weeks long, it is one of the most concentrated, giving you more than you would expect in terms of landscapes and culture for such a short trek.

What is the Bumthang cultural trek difficulty?

The trek is rated as “easy” according to the Tourism Council of Bhutan, and while it may be an easy trek for those with good physical fitness, novices to trekking may still find it a little demanding. Each of the days has no more than 16 kilometers of trekking per day, or around 10 miles, and there are plenty of stops during the day, where you will be able to catch your breath. 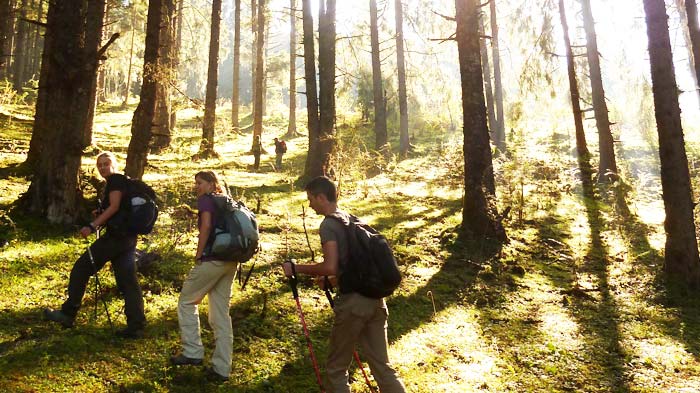 Trekking enjoyably in the old-growth forest in fine weather.

The hardest part of the trek is the ascent to the Pephe La Pass, a relatively steep climb of around 500 meters to the crest, at an altitude of 3,353 meters above sea level. With most of the trek being between 1,200 and 2,500 meters above sea level, you should not have a problem with altitude sickness, and even at the highest point, you will be descending again after cresting the pass, so there should be no problems.

A 15th-century temple, Thangbi Lhakhang lies on the small plateau overlooking the Chamkar Chhu, in a small sheltered grove surrounded by the local village houses. Founded by Shamar Rinpoche of the Tibetan Karma Kagyu School, the temple contains statues of the past, present, and future Buddhas.

Ngang Yul, or the Land of Swans, is a small region in the Choekhor Valley that was once populated with thousands of swans, and is a site visited by the famed Guru Rinpoche, or Padmasambhava. The Ngang Lhakhang in the region was built in the 15th century by the contemporary of Pema Lingpa, Lama Namkha Samdrup, and is known locally as the Swan temple. 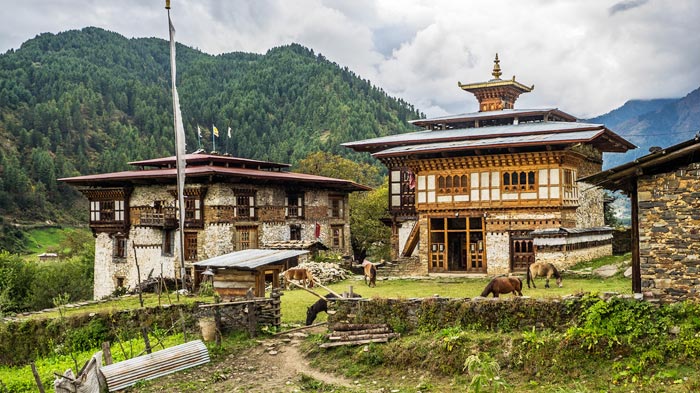 Phephe La Pass, at an altitude of 3,353 meters above sea level, is the hardest point of the whole trek, coming after a steep climb rising 500 meters from the valley below. Trekking through birch forests draped with hanging Spanish moss, the crest of the pass is marked with fluttering prayer flags and a mani-stone shrine.

A major Buddhist monastery belonging to the Nyingma School of Tibetan Buddhism, the Tang Rimochen Lhakhang lies in the Tang Valley near the village of Misethang. Built in the 14th century by Pema Lingpa on a site said to have been a meditation site for Padmasambhava and his consort, Yeshe Tsogyal, and as well as having a rock that is said to have the footprints of the two Buddhist masters, the temple contains the world’s most valuable painting of Milarepa.

Mebar Tsho, or the Burning Lake, is considered to be one of the most sacred sites in Bhutan, and is said to be where Pema Lingpa discovered hidden treasures. After having a vision, Pema Lingpa held a butter lamp in his hands and jumped into the lake. When he surfaced, he held a chest and scroll in his hands, and the butter lamp was still burning brightly. 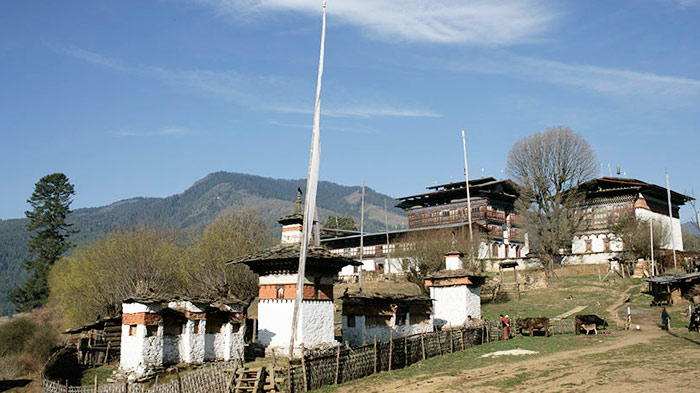 Lying in the Tang Valley, Ogyencholing is one of the eight lings founded by one of the great masters of Tibetan Buddhism, Longchen Rabjan, in the 14th century. Now a part of the Ogyencholing Foundation, the ling is now a museum of Buddhist scripts, and a research library for scholars and practitioners of Buddhism. 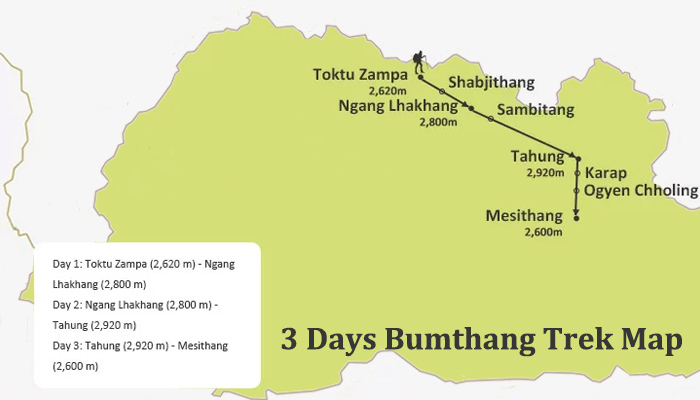 What can we explore from day by day Bumthang cultural trek itinerary?

The first day of the trek takes you from Toktu Zampa, along the Chamkhar Chhu, also known as the Bumthang River, stopping for a break and some lunch at the Thangbi Lhakhang. From there, your afternoon takes you into the stunning Ngang Yul, known as the Land of the Swan. In the center, you will find the beautiful Swan Temple, or Ngang Lhakhang, named for the swans that used to reside in the area. 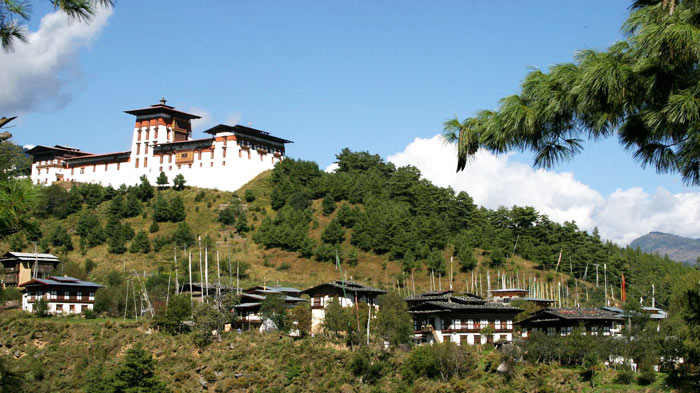 Day two starts with crossing the vast meadows of the valley sides, with a great view of the valley floor below. Then you will make the gradual climb up to Phephe La Pass, at 3,360 meters, the highest point of the trek. The trail takes you through some of the most beautiful juniper and pine forests, eventually leading you down into the broad valley and the village of Tahung.

On your third day, your trail follows the Tang River, famous for its trout fishing, to the TangRimochen Temple, the meditation site of Padmasambhava. Then you will head up to the Burning Lake, known locally as Mebar Tsho, and on down to Tang Ogyencholing, the former palace that is now a privately-owned museum and library of Buddhist scriptures.

How much money does the Bumthang cultural trek cost?

While most countries have different trekking costs, in Bhutan, your trek cost is all part of the Minimum Daily Package, which starts at 200 dollars per day in the low season and 250 dollars per day in the peak seasons. While this may look expensive, the cost does include all of your needs, from your food and accommodation in hotels before and after your trek, to the cost of camping equipment, your trekking guide porters and cook, and all transportation. Meals are provided as part of the tour for the duration of the trek, and packed lunches are prepared before you start your day’s trekking. The only additional costs that you will have are those of a personal nature, such as souvenirs and gifts, alcoholic drinks, and other personal requirements. Ultimate Guide on Bhutan Trekking Routes Prices and All

When is the best time to take the Bumthang cultural trek?

Bumthang is a region of Bhutan that can be trekked all year round, though the main trekking seasons are spring and autumn. The spring runs from March to May and autumn from September to November, and is when the weather is at its optimum for Bhutan trekking, with clear skies, good weather, and warm sunny days. 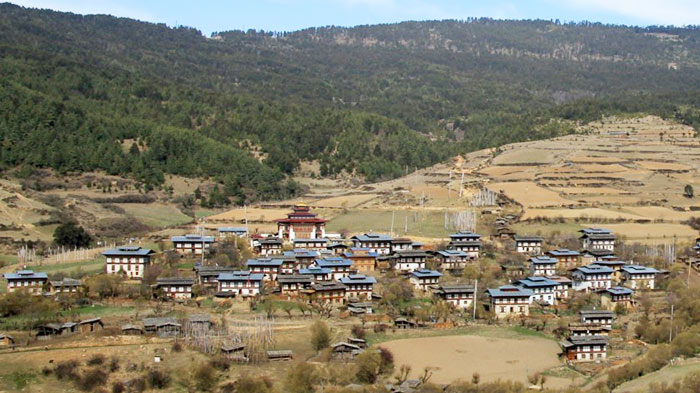 Bhutanese Town during the trek along the route.

It is possible to trek in Bhutan in the summer months, from June to August, and winter, from December to February, although there is no guarantee of the weather. The summer monsoon is normally from June to August, and while many of the days can be bright, with rains in the evening, there are times when it can rain all day. Similarly, the winter can sometimes be very cold, even snowy, despite having bright sunny days.

What should we pack in advance before taking the Bumthang cultural trek in Bhutan?

Packing for the Bumthang cultural trek, if you are taking it in spring or autumn, is relatively easy, and you can pack mostly what you would take for any other trek, including good hiking boots, warm socks, hiking pants, and thin sweaters to layer if it is a little cold. A good hiking jacket is essential, especially when you stop, to keep you warm. Trekking poles are an advantage if you are a novice, especially for the steep climbs, and you should bring gloves to keep your hands warm in the colder periods, as well as a hat, sun cream, and sunglasses, to protect you from the bright sunlight.

You should also bring a good day pack with you, as you will not have to carry your main pack, which will be portered to each campsite before you get there. Your day pack can hold your essentials, including water and snacks for the trek.

Your food and accommodation on the trek are all part of the Minimum Daily Package, and are provided by the tour operator. Tents for camping are part of the provided equipment, and your food will be catered for by the cook, who will have breakfast ready before you break camp for the day, and have a hot meal ready when you stop at the next campsite. They will also provide packed lunches for the trekking days.

The Bumthang cultural trek is one of the more popular short treks in the Bumthang District, and has had good reviews from trekkers around the world. Considered to be the easier of the two short 3-day treks in Bumthang, the other being the Owl Trek, the cultural trek is the lower in altitude, and often better for novice trekkers or those that want to see more of the countryside surrounding the Choekhor Valley.